A brief update on my ongoing Wars of the French Revolution project seems in order as today I finally finished my fourth British infantry regiment, the 12th Regiment of Foot. As you may recall, I've chosen the regiments to depict in my force for no other reason than I have some spare SYW flags which will do the job for me. They are from GMB of course and the figures are from Trent Miniatures again. The regiment drawn up in line on the table for the first time ~

The command group next, illustrating the problem when sculptors change during a project. The drummer an the two 'ensigns' being by a different sculptor after Matt and Duncan parted company. I know I am biased, but the new stuff is vastly inferior in terms of animation and general sculpting skill, harking back to the days of Garrison or Minifigs in terms of detail, but I have done my best with what I had. 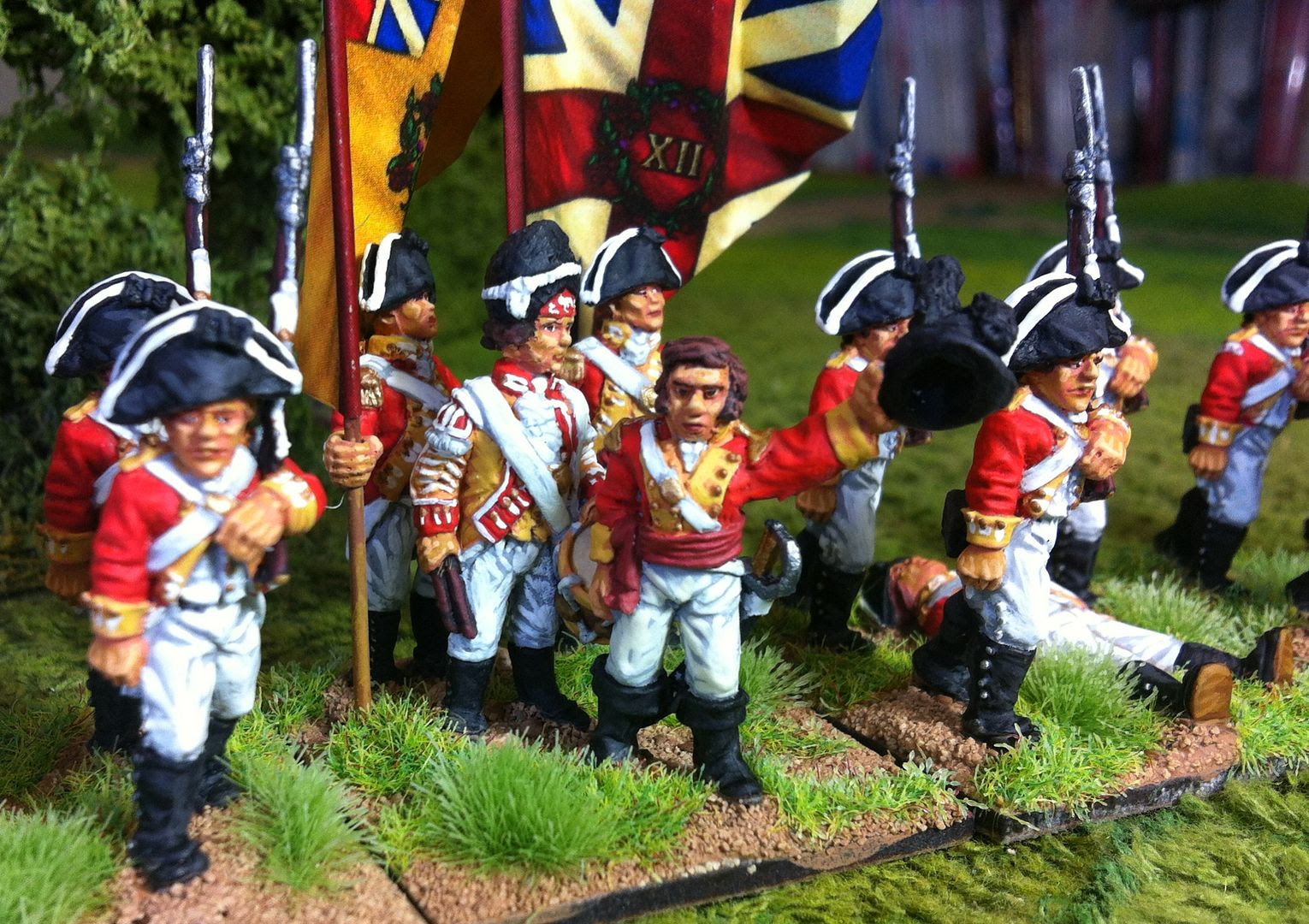 Of course, while trying to avoid the newer offerings wherever I can, I am left with a bit of a problem when it comes to flank companies. There are none in the old style, so I have continued the experiment I started with the previous unit and have painted the wings on! 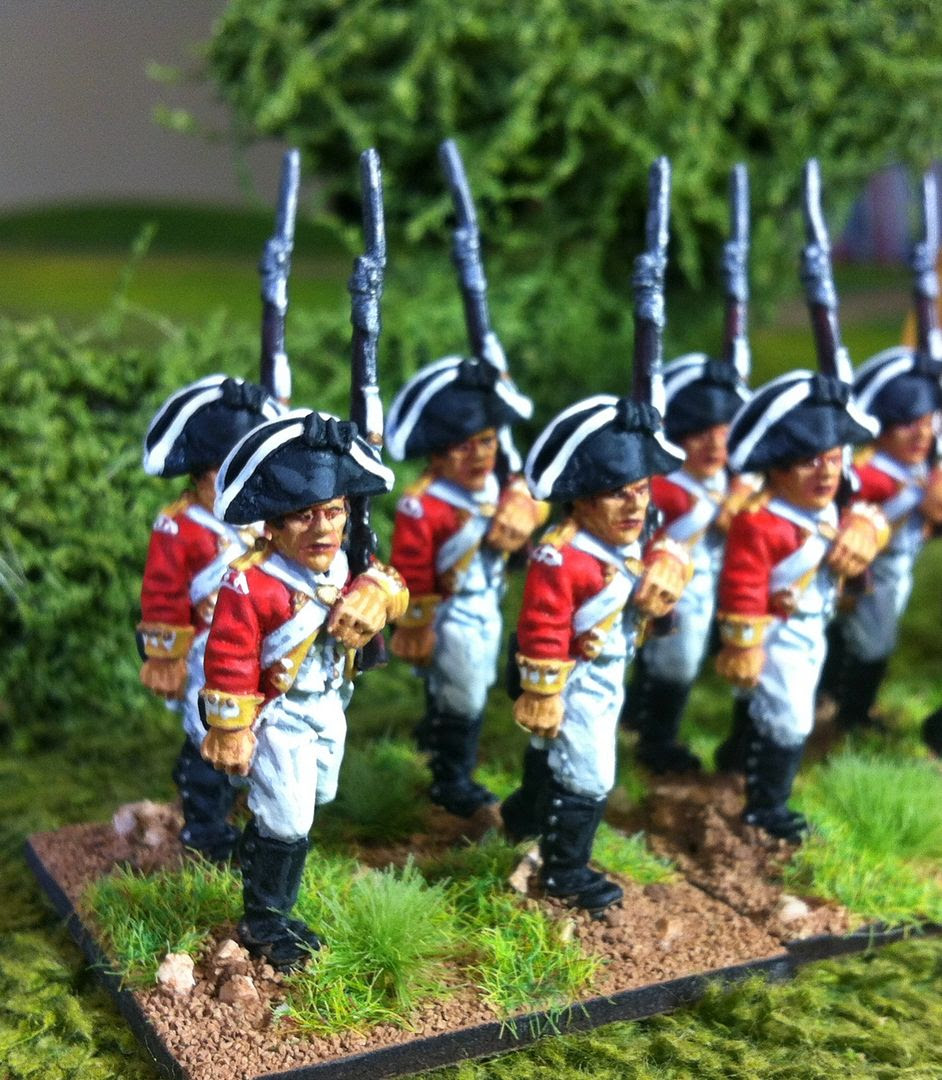 Purists, otherwise known as 'Napoleonic nerds', will be having a choking fit by now I would guess, but I really don't think they look too bad. Put it another way: 'They'll do!" to quote a friend. In case you think I have a downer on all the newer sculpts in the Irish {British for me} range I will say that I quite like the drummer, though find him a tad tall for my liking, and the new casualty figures will do very nicely ~ 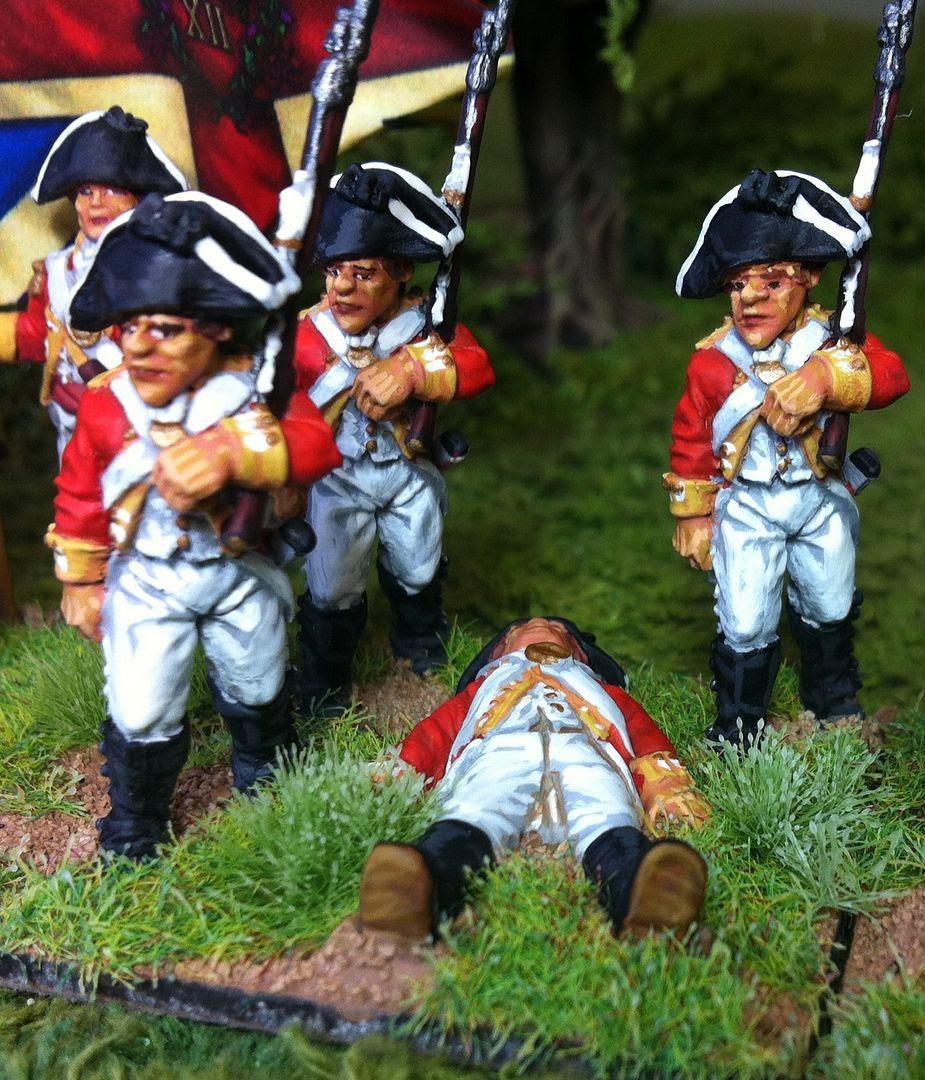 On a different tack now, as I mentioned in an earlier post, my eyesight is not what it was. When I see the figures on the screen now a days its the best idea I get of what they actually look like to other folk. I can see loads of issues when I study them closely, but on the whole I'm still quite pleased that they look OK. I just hope others think so too. I'd be mortified if folk were being kind to me as an elder statesman!
I have two extra French Dragoons on the painting table to finish off a unit of eight and then two British Light Dragoons to bring that unit up to eight. That will mark the end of phase one of the project and I shall be venturing off into other projects in July and August for a welcome break. I hope to paint up "Aston's Scouts" for my Rhanzlistan Field Force project and some extra Japanese infantry for our Burma 1944 games. In September, DV, I hope to return to the FRW with more French infantry, a fifth British infantry unit, and the first of the Austrians. I have preordered from Duncan two 30 man Fusilier Battalions and a 24 man Grenadier Battalion together with some gunners. All figures made by Matt so I shall be on safe ground painting them I know. I shall have to order the guns though from Front Rank, who have already provided my Generals!
Posted by David at 12:51