This week I have been mostly...

...painting the wrong figures! Well, not quite, but you'll soon grasp the enormity of my error! Last year I decided on one last addition to my Army of the Pendawar Presidency, namely two Regular Infantry regiments to facilitate the formation of a Regular Brigade. Rather than just buy two regiments from Perry Miniatures I bought just one and then a second from Wargames Foundry's Napoleonic range. At first glance hardly a disastrous error you'd think. Ah, well there you are wrong then! I chose a regiment of Highlanders in bonnet and trews and the flag from GMB Designs for the 74th (Highland) Regiment. So, you may ask? Well, it happens that the 74th were not a Highland Infantry kilted regiment during the early years of the C19th! This is how they appeared during their time in India ~ 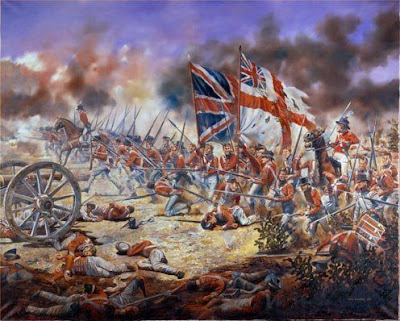 They look in fact exactly like my other British Regular Infantry Regiments in my Army of the Pendawar Presidency.  On the other hand, the figures I’ve been painting so slowly and carefully over the past week look like this ~

A bit of a difference you have to admit. Am I overly concerned though? Well, no I’m not. After all, if I can Field the South Essex Regiment, which never existed outside the books featuring Cornwell’s Fictionalised hero Richard Sharpe, I can surely stand a unit of premature Highland Infantry! My game, my toys in play again you see. 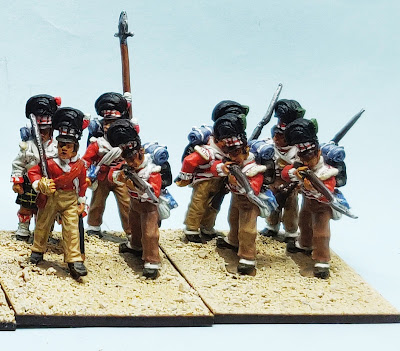 For those who’ve got this far without giving up in despair I’ll add that the other regiment formed from Perry Miniatures will be the 79th, the Hindoostan Regiment, also with white facings and a white Regimental Colour! Obviously not one of my better days when I decided all this! I’ll put it down to age I think... Twelve more figures to complete the regiment, then I'll wash and vegetate the bases all in one go.

Alongside my painting exploits I’ve also been assembling more 15mm MDF buildings for the Cold War Gone Hot Project. The latest additions are a number of terraced houses. Now, I’ve no idea if terraced houses were a thing in Germany, but they will be found in my game layout, representing both the older edges of urban areas or on their own as small built up areas so far untouched by post war modernisation. I have a few more bits on order from Lasercraftart which I hope will see me through as regards that part of the project, at least in the build up phase.

Email ThisBlogThis!Share to TwitterShare to FacebookShare to Pinterest
Labels: Painting, Tales from Pendawar