At Salute I collected the stuff I'd pre-ordered early on in the day, as it was n't bulky and troublesome to carry around the show. I've found that this approach to Salute, coupled with marking up a floor plan before the event with the traders you'd like to shop with and the games you'd most like to see, leaves you freer to enjoy the event and can lead to surprising acquisitions... 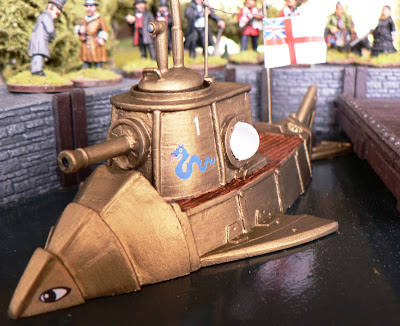 This is the former Flagship Games Victorian Shark submersible, I believe, though perhaps with different gun and hatchway.
I've been after this for an age with no success, so was really chuffed late in the day to see it on the Black Hat Miniatures stand, hidden away in the bottom of the display case. "I'll have that!" I thought, and now I've painted it up to add to my growing Victorian Pulp game. 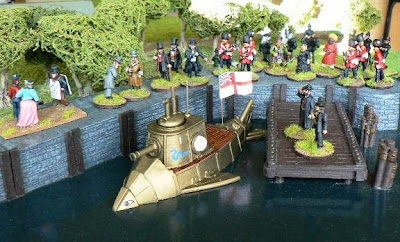 Here the HMS Sea Dragon, an experimental submersible vessel, can be seen departing dock on her maiden sea trials under the watchful eye of her creator, the brilliant but eccentric inventor Professor Braynstawme. Meanwhile, on the dockside, Queen Victoria {"Gawd Bless 'er!"}﻿, flanked by her trusty servants and troops from her Household Guards, watches as the vessel slips silently from her moorings... 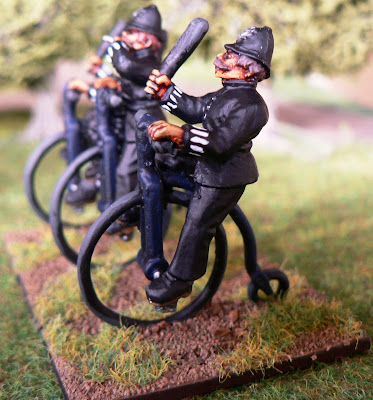 Even back in the golden days of Empire, Royal security was always a concern for the Home Office. Here we see the stalwarts of the newly formed 'Flying Squad' from Scotland Yard, standing ever ready to defend the Queen's person from some dastardly plot...
The figures in my Victorian Pulp collection are a mixture of Foundry, Ironclad and the Partizan freebie figures. Even though we've only played a game or two with them, I keep adding bits as I go along. I hope to get some buildings next to go alongside the dock and the cemetery tiles I made for my 1920's Chicago Gangster games.
Posted by David at 10:30