I went to Salute on Saturday, but I don't intend to write much about that today, instead I feel its appropriate to allow myself a little more nostalgia, prompted by the old photos I mentioned finding in my previous post. 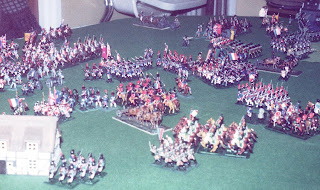 Seeing all those wonderful games and chatting to several of those responsible during the day, its easy to forget my early wargames fought over the dinning room table.
In the picture you can see my early Minifigs Napoleonic armies clashing in front of a rather incongruous Airfix thatched cottage, and all on a nice plain green felt cloth...


Of course, even then my favourite period was the American Civil War, using Minifigs figures again for my two early war armies... 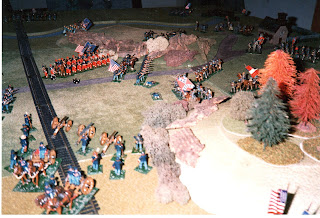 From the look of the table it seems we were in the middle of building some terrain, to replace the old cloth in the first picture. We seem to have used 15mm buildings from Hovels by then too, so the old Airfix stuff must have gone to a better place...

Of course, Phil and I did n't always game exclusively across our dinning room table. In the 70's and early 80's we'd been members of a local gaming club and, in company with one or two other hardy souls, had even put on display games at several Partizan shows and other lesser events in the Central England area. 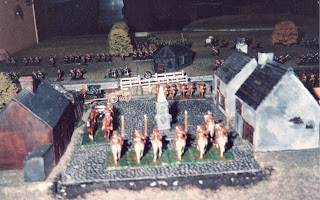 One of our more memorable outings was with a 15mm Mons 1914 game which we staged at a show one Sunday in November in Bedworth. It turned out to be Remembrance Sunday of course, and we found our game prominently placed in the venues' main window, directly opposite the local war memorial where the Remembrance service was taking place... 'Embarrassing', I felt at the time if I remember correctly. Another memorable failure was an early attempt at a Crimean War display game at Partizan. So out of mainstream at the time we hardly attracted a passing comment and were even shunned by the photographer! Quite odd now when you look at the current edition of Wargames Illustrated too... That's Phil, by the by, sporting one of his more tasteful shirts I think. 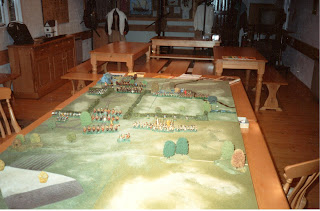 More interesting was a weekend we spent at Boscobel House, as guests of English Heritage, where we staged a 25mm ECW game based on the Battle of Wigan Lane in the venue's Education Room. We did n't game overmuch, but we spent a good deal of time chatting with numerous visitors to the house on both days. 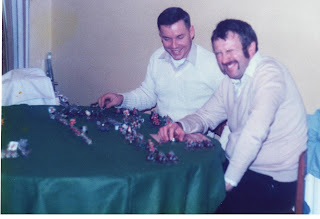 But when I look back on it all now, where ever we were, it seems that we had fun: as the photo of those two {rather young} chaps seems to suggest... its Dave Paddock, on the left, and yours truly,on the right, by the way.
Posted by David at 10:04