The end of Chief Bykelezi...

Today Phil and I managed to get our schedules into harmony and met up for a game here in GHQ, our first for a while due mainly to Phil's new work commitments. Phil chose an Anglo-Zulu War game, using my own 'Washing the Spears' rules. The Zulus were set up first on the table, then Phil chose a force selected from my collection of Empress Miniatures figures.

The British and Imperial force at the opening of the battle: the 80th, the Staffordshire Volunteers and the 24th, the 2nd battalion the Warwickshire Regiment. 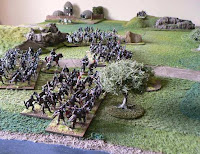 Hordes of Zulus swarm towards the British lines. The figures are almost all Empress Miniatures metals, supplemented by a few from the newer Foundry range. {None of these cheap plastic figures for me!} 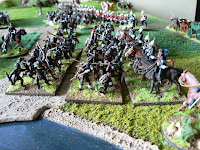 An early success for the Zulus! The Natal Mounted Police contingent, covering the ford across the river, are surprised by the swift attack of the Zulu and wiped out in a fierce hand to hand struggle. 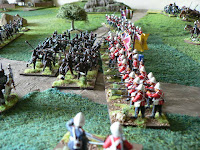 The firepower, or lack of, from the lads from Staffordshire fails to halt another rush of Zulus and fierce fighting rages along the line. For a while things look bleak for Lord Rawnsley's force as losses mount on both sides.

But, despite heavy losses, the British 'Pluck' holds strong while the Zulus break and flea. When it came down to it, "They don't like it up 'em!" seemed to be their sentiment of the day! We called it a draw at this point. My Zulus were not strong enough to see off the remaining British troops and their rear was threatened by the Mounted Infantry across the river.
Posted by David at 10:32