Action at Bronkhorstspruit, or at least a game based on the action fought on 20 December 1880 during the First Boer War, was the subject of today's game here in GHQ between Jon, commanding the Imperial force and yours truly commanding the Boers. 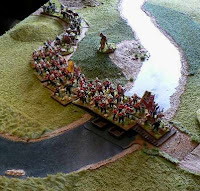 The Imperial column snakes across a river using a pontoon erected by the Royal Engineers.

A reporter pauses to refresh himself and his mount as the Infantry cross the pontoon bridge.

The column is screened by a detachment of Mounted Infantry.

Boers engage the Mounted Infantry, with very little success I have to say...

Kommandant De Byklei, in the top hat, coordinates the fire of a Boer Kommando and a gun ~ without much success I'm sorry to say!

A fierce firefight develops along the line of march, with Infantry deploying to assault the Boers' position on the heights.

Boer 'Pluck' finally evaporates as their losses mount and they contemplate the glint of bayonets marking the British Infantry's steady climb up the heights. Kommandant De Byklei orders a general withdrawal, or as Jon might say, a flight to safety...

The figures are mostly Empress Miniatures, from their Anglo-Zulu War range, although the Boer gun is a Foundry Krupp and the gunners are conversions from the Perry Miniatures' Mafeking 'Armed Civilians' pack. We used an amended version of my own 'Washing the Spears' rules ~ available from Caliver, Redoubt and Dave Thomas at shows or by mail. We played thirteen turns in about two hours, until the Boer losses mounted and a 'Pluck' failure ensued...
Posted by David at 10:40

Email ThisBlogThis!Share to TwitterShare to FacebookShare to Pinterest
Labels: Games