Carrying on Up the Jungle...

...for our weekly game here in GHQ, a return to Burma 1943. Pitting elements of the Japanese Imperial Army, lead by Colonel Onomoro against the British & Empire Army commanded by that well known military incompetent, Major 'Tubby' Bykleigh. We had originally planned on using Bolt Action, but discussion over a pregame coffee lead to a decision to try Rapid Fire Reloaded instead. As ever, a photomontage to try and convey some idea of how the game played out ~

A view across the tabletop battlefield from the Japanese side. Pretty much all the appropriate terrain I have for jungle games.

Some Japanese Type 94 tankettes lead a reconnaissance towards the heavily defended ford across the river. Here it can be crossed by vehicles and infantry without penalty.

Encountering no opposition they press forward, supported now by an elephant drawn anti-tank gun and the first of the Japanese infantry!

Fighting breaks out in the centre first as the Gurkhas dug in along the river banks come under mortar and infantry fire from across the river.

Both the Gurkhas and the Japanese take early casualties, the larger Japanese infantry groups somehow disguise the scale of their losses more than the smaller Gurkha groups 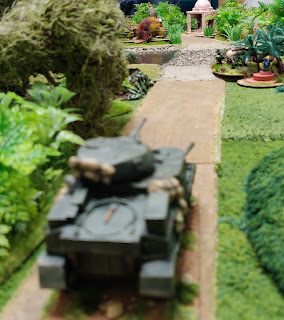 With the Gurkhas defending the ford now coming under machine gun fire from the Japanese Type 94 tankettes the British Grant rumbles forward, its opening shot destroying one tankette! 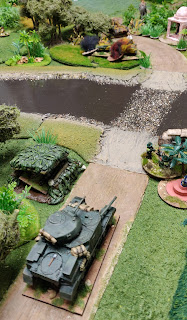 Emboldened by his success, the tank commander orders,  "Driver, advance!" The second shot damages the remaining tankette but fails to drive it off!

Gurkha resistance is crumbling under sustained fire, enabling the first Japanese to cross the river and occupy the deserted positions (callously bayoneting the wounded of course!)

The British infantry occupying higher ground in support come under intense mortar fire! Casualties are mounting alarmingly and the response is desultory at best.

The advancing Ha-Go gets the first shot in and brews up the Grant! Things are looking more than a bit rum for our boys right now. 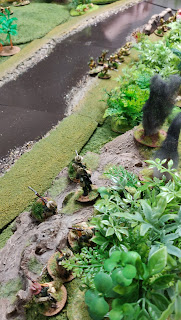 More Japanese infantry are across the river, effectively splitting the Empire troops' position. Casualties reach a critical points and morale collapses! The decision of the Dice Gods brings 'Surrender or Rout', neither being a welcome option here! A hard fought win for Onomoro, but a win never the less! Tremendous fun of course for both players, but very bloody from the off. I still find myself pining for the second edition Rapid Fire! rules. '10 pts on Table 4!' is etched on my memory it seems!