This is my representation of the B.A.O.R. Mechanised Infantry about 1983ish, based on the diagram below lifted from the net ~ 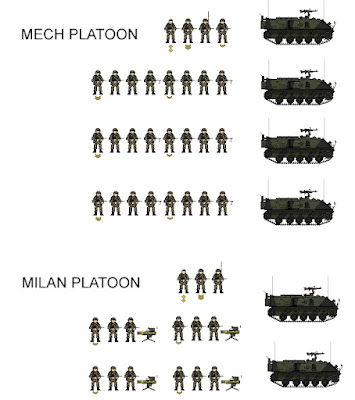 Although the diagram represents the Platoon organisation in our games it will be a Company by the addition of 51mm mortar and GPMG teams, or even a Battalion by adding a second 51mm mortar and GPMG team.! As I'm sure you recall I'm using the Battlefront metal figures for these. Since I posted them as a work in progress in the previous entry I've reworked the helmet covers and also completed the whole group. I've yet to decide how to grass 'n tuft their bases though, largely thanks to Phil offering a suggestion I'd not considered. More on that when I've made up my mind on it. In the meantime here's a group image ~

In addition to reaching this stage a number of vehicles have exited the paint shop and had markings applied before being based and textured. They now also await washing, followed by grass 'n tufting. A word on the transfers; it took me over an hour to do four vehicles! The transfers, just over two years old, kept disintegrating in the water! Poor show! Finally, William came by for another of his 'wargames with grandad'. The result was never in doubt given his ability with the dice ~ 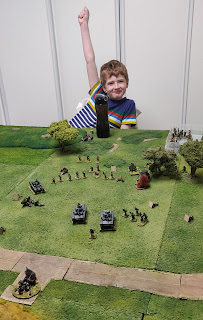