The Other Partizan in Pictures

The much anticipated Return for the Masked Wargamer! A smorgasbord of gaming goodness now in the form of pictures of games which impressed me after the last 19 months hiatus. 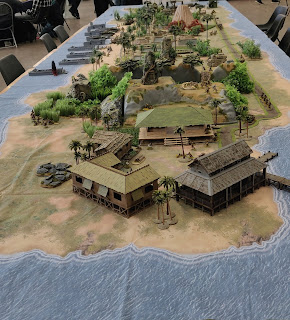 The Bodkins' Medieval game. Painting I could only dream of!

WWII with newsreel movies in the theatre! 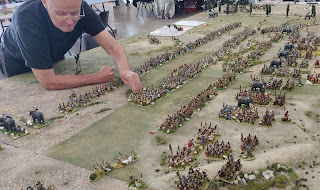 Lots of elephants in a spectacular Ancient game! 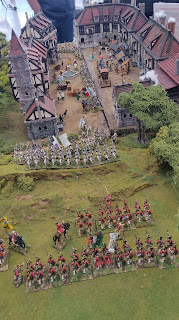 Amazing C18th game by Friends of a Military Gentleman, so much going on I could have studied it for an hour on its own! 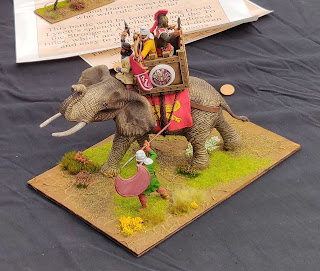 Close up of an elephant model from the same game.

WWII games were much in evidence I thought. An ever popular period amongst gamers.

I so enjoyed seeing the wonderful painting and modelling skills on display in all the games, but this by Shrewsbury Wargames Society was full of detail. 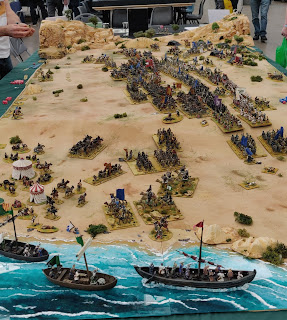 Medieval Spain! A riot of colour!

War of the Triple Alliance by the Perry twins, Alan and Michael, showcasing their companies range of figures for the conflict.
A very busy show, so much so that I missed speaking to several chums. Sorry chaps! Very many folks not sporting masks, despite the organisers' pleas. Poor show by the hobby that. I found it very tiring and was very anxious at times I have to say. Good to do something near normal though! Overall? A Grand Day Out! Cracking Show Wallace!
Posted by David at 10:46