The Other Partizan ~ Afterword 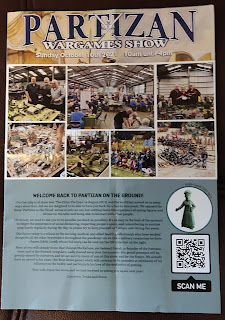 Well, after a couple of days the dust has settled and it's possibly a good opportunity to look back now at the show last Sunday, the first it has been both possible and practical to attend since Hammerhead and WMMS 2019! Due to unfortunate circumstances beyond our control Phil and I did not arrive until just after midday. Happily that was well past the queuing time for entry, so £2 each handed over for our entry, the first for Phil as  an OAP  concession, though not of course for me! Cheap as chips, as they say, for what you get inside!

In these uncertain times we both heeded the organisers' wishes, being fully vaccinated, masked up and using hand sanitizer frequently. In addition I think Phil had taken a lateral flow test the day before. My overall impression during the two hours we were there was that mask wearing while moving around the show was by a minority. Saying that, other pictures and videos I've seen show much more compliance, so perhaps earlier when it was very crowded folk were more compliant? It was certainly still busy while we were there, though less so than the first two hours.

On reflection, and being frank with you, I did enjoy my shortened visit but used the time mainly for catching up with Matt on the Bodkins' Medieval game and then with Kevin and my other Scottish chums who I'd not seen for over two years! I did look around the many splendid games of course, the highlight of any Partizan event but more so after the COVID-19 induced hiatus. You will have seen my and many others' pictures I'm sure and will fully appreciate the spectacle on display from so many talented folk. So many really that together with the crowds and the anticipation I found it all a mite overwhelming.

I did do a little shopping, mainly collecting pre ordered bases from Warbases and several feet of river from The Last Valley, the latter financed by a Lotto win last month! Here are some of the sections laid out on the table in GHQ the next day ~ 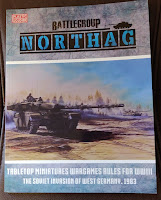 In addition I bought the Plastic Soldier Company's Battlegroup Northag rule set to give us a choice for our 2022 project in 15mm. I hope their B.A.O.R. plastic infantry will be out by then too. I also bought 7 ProArte 40 sable brushes for £10 from ABC Brushes. I've found these by far the best and hard-wearing brushes I've ever used and at a bargain price. Matt very kindly treated me to a restock of Gamers Grass tufts from Great Escape Games and that was it! I didn't buy a single figure! We even missed the free figure as they'd all gone long before our arrival!
Now there is a bit of an anxious wait to make sure I didn't bring anything unwanted home with me! It was good to get to a show in near normal circumstances, to meet friends, to see games and to spend some of the accumulated War Chest on the hobby! Will I risk another show before next Spring's WMMS or Hammerhead? No and certainly not Salute, far too risky given my age, the numbers attending and location/venue. I've had my hobby fix, I'm grateful for that, but I can wait now for next year... Thanks to the organizers, the traders, the game and society participants and Matt, Phil, Kevin and my myriad gaming chums I had a Grand Day Out! As I believe I've said, a Cracking Show!