As Phil's circumstances are sadly somewhat out of kilter these last few days we were unsure of our regular weekly games taking place. For that reason I left the F&IW game that Jon and I played last week out on the table, though I did reconfigure the French initial deployment to give a different game I hoped. I took a few pictures during the game to give a sense of the action for interested visitors, even the Trapist ones! 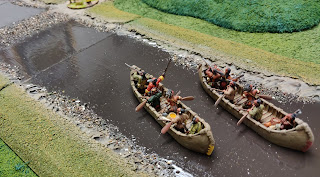 The Paddaquoi paddling their own canoe! Used as markers for starting points in the game.

Other of the Paddaquoi tribe started the game in their temporary village further up the river. (The village is worth 5 Victory Points)

The 38th Foot marking out of camp past Fort Desperation with colours flying. The fort is held by a company of Grenadiers of the 42nd Foot. (The fort is worth 5 Victory Points)

Regiment Roussillon marches boldly across the southern ford, its mission to burn the two homesteads. (Each one Victory Point) Note De Bykli leading from the rear!

The Paddaquoi war party leaves the village and promptly Blunders off up the high cliffs, right in range of the British Light Artillery! Merde! The Coureurs du Bois and the Woodsmen are very tardy in their movements.

Robinson's Rangers are moving to support the 38th's advance on the northern ford while the Colonial artillery does its best to disrupt the blundering Paddaquoi war party!

Lord Rawnsley finds the French are behind his flank and must reorganize his defences to stave off disaster. Meanwhile the Coureurs du Bois seize the northern ford. Still no sign of the large Paddaquoi war party though!

Well, the Paddaquoi war party finally arrives in support of the Coureurs du Bois holding the ford. The French woodsmen find cover in the woods to their front and harass the Light Company of the 38th. 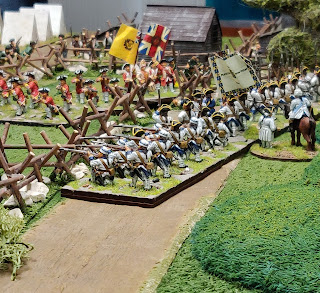 By Turn 8 things are looking really good for De Bykli's force. Appearances can be so deceptive though and the dice gods so cruel. Volley after volley crashes into the red lines only to see Saving Throws over ruling almost every one! Merde!

Under pressure from the Paddaquoi war party and Coureurs du Bois to their front and the Regiment Roussillon on their left flank the Redcoats and Rangers buckle and bend but do not break! Mon Dieu!

In a final heroic action the chief of the Paddaquoi, Running Scared, leads the remnants of his war party and rushes to set one homestead ablaze! (Follow Me of course!) Sadly the attempt fails in Turn 10 and takes Turn 11 to set the cabin ablaze! {As it cannot burn for three turns with the game ending in Turn 12 De Bykli cannot claim a victory point!}

The scene at the end of Turn 12, each side having 6 1/2 Victory Points the game is declared a draw. Next up in GHQ should be an ACW game in a couple of weeks, as Phil is away for a much needed break. Next up on the blog later in the week should be some Confederate infantry I've been working on steadily.