Mounted Command figures for the AWI

Still in the flow with my expansion to my AWI armies I've completed three mounted Command figures to make two Command bases, one British and one for the Continental army. The figures are once again from  the Perry Miniatures range for the AWI.
There are two figures in cut down coats and round hats which I've painted and fixed to one base for the British. They seem to me to be in urgent conversation so it seemed appropriate to base them together in this way ~ 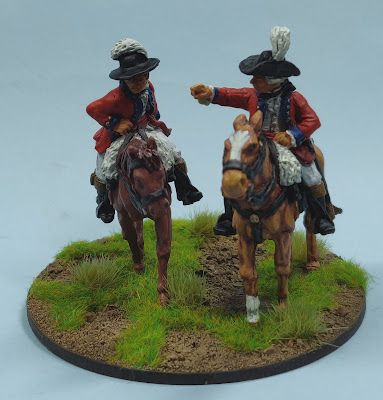 The third figure, depicted in full dress on a rearing horse I've painted as a Continental General Officer. His pose is suitably aggressive it seems to me for someone in rebellion against his lawful government ~ 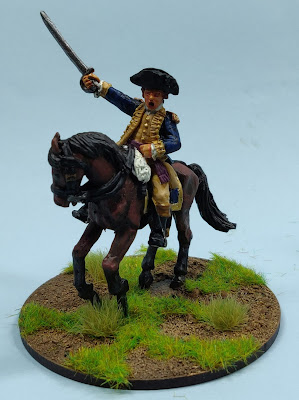 While I was finishing him off I've made a start on a Continental infantry unit in a mix of regulation uniforms and hunting shirts. They depict a firing line of course. The figures are from a mix of Perry Miniatures and older Foundry Miniatures, but all sculpted by the Perrys of course. When these are completed they will get a post of there own, so if you are interested then keep an eye out.
Posted by David at 08:29