The 2nd Maryland musters in!

I've completed the next unit in my planned AWI expansion project, an American unit to depict the 2nd Maryland. They are comprised  mostly of Perry Miniatures with a leavening of older Foundry figures, also sculpted of course by the Perry twins.
I chose a mixture of firing and loading figures in uniforms and in hunting shirts to give the unit a slightly ragged look. The figures in uniform coats I painted in Foundry Conker Brown Shade, highlighted with the same colour's Light, with red facings after a Don Trioani print. While for the hunting shirts I painted them in Foundry Drab, highlighted with British Uniform Light. The flag is from the earlier free downloads now sold by Warfare Miniatures. They were made originally by Clarence Harrison. As usual now, a picture of the unit here drawn up in a firing line ~ 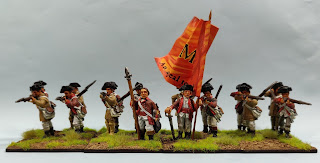 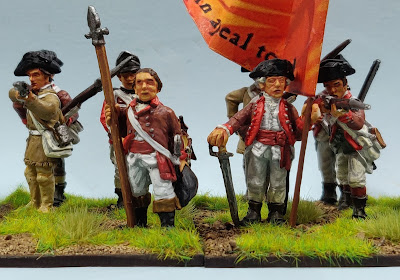 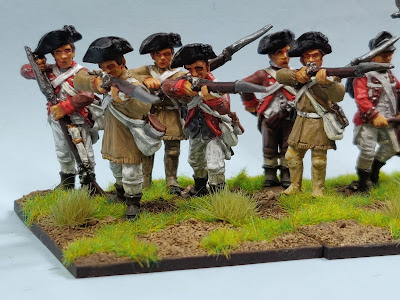 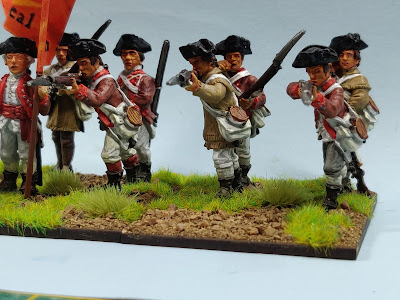 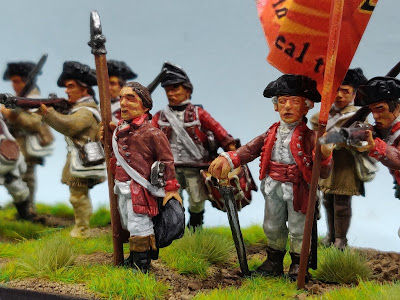 I'm off to Matt's for the Easter weekend - it's also Reuben's 4th birthday on Saturday and our 46th wedding anniversary on Easter Sunday, so plenty to celebrate there. On our return the painting table will first be occupied by figures for a British High Command base featuring more  Foundry miniatures, followed by a Brigade Command base with figures from the same manufacturers. Happy Easter!
Posted by David at 09:59