A recent addition to the cast of New Paddock City sees the arrival of the nefarious  Dr Byk Li{李医生}, seen here carried on his Jade Throne by his loyal henchmen, Yin and Yang {燕和杨}, accompanied by his eldest daughter, the beautiful but sinister Blue Orchid{ 蓝兰}. The figures are from the latest Pulp Miniatures' release, 'The Palanquin of Dr Koo'.~ 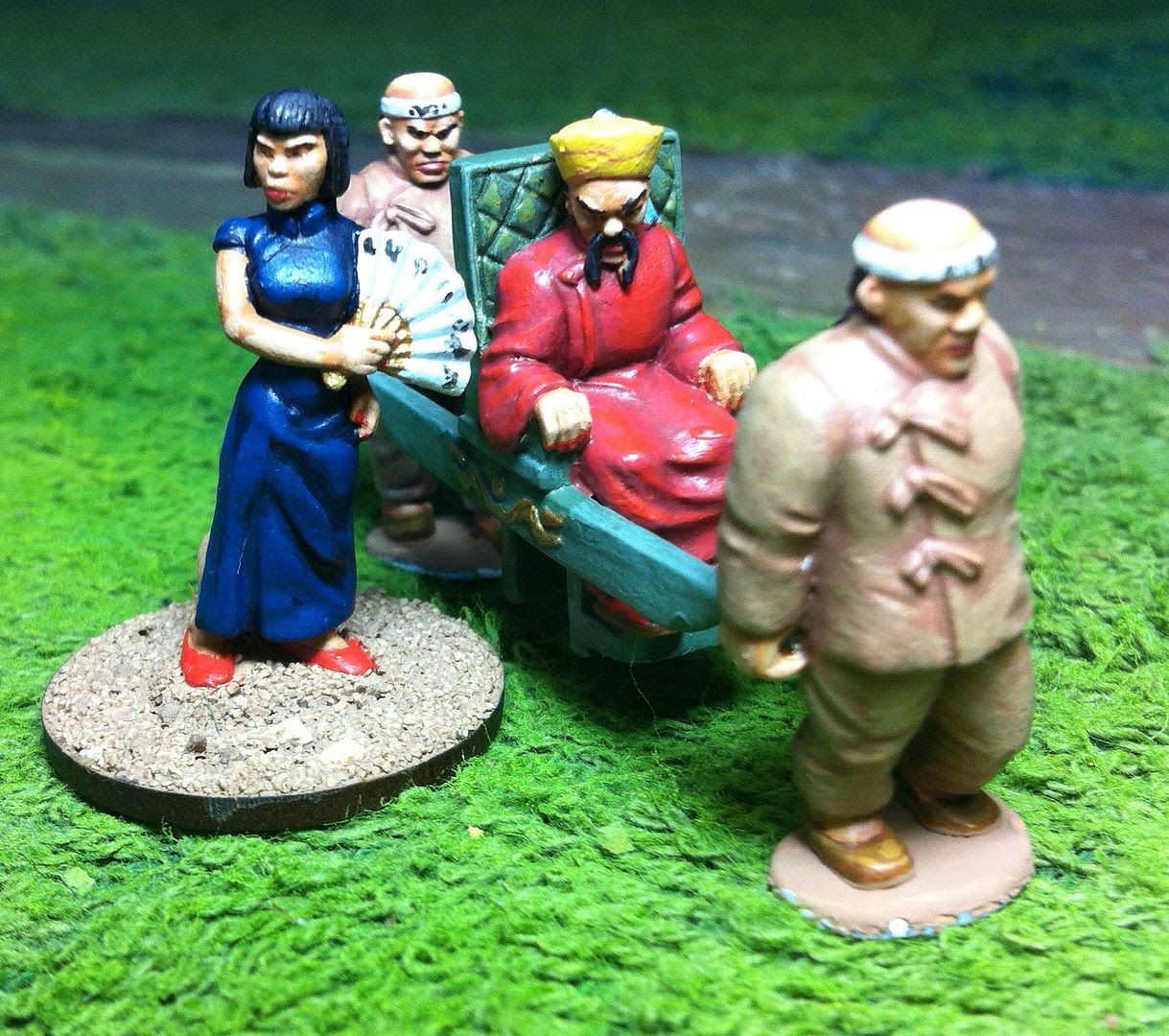 The Jade Throne bears the symbol of the Dragon Tong, much to be feared by those who fall into their hands ~ 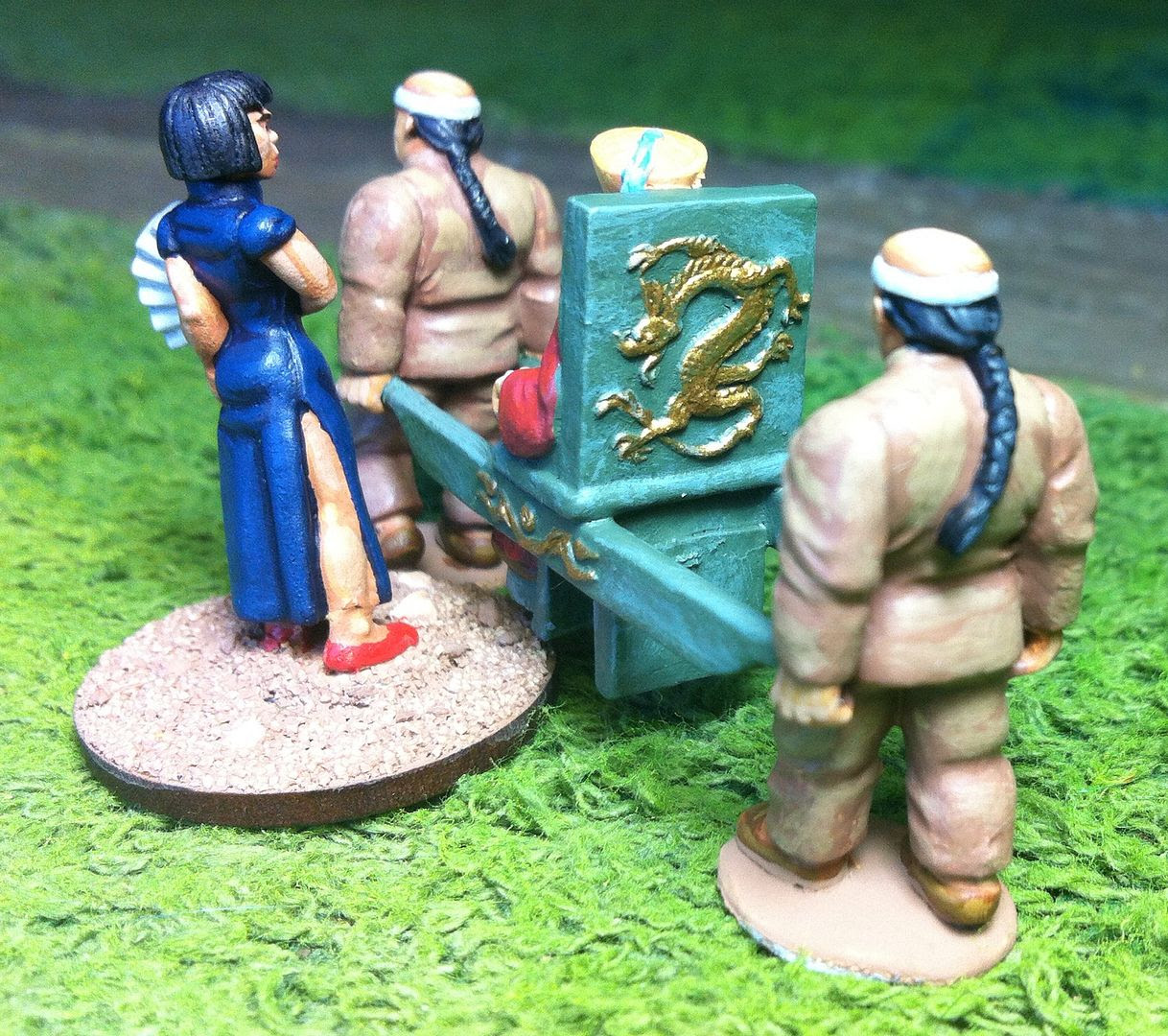 Of course, all villains really need a cover story, and Dr Byk Li's is already in place in the town in the form of Byk Li's Chop House, a cheap eating  place for low life passing through the town and up to no good ~ 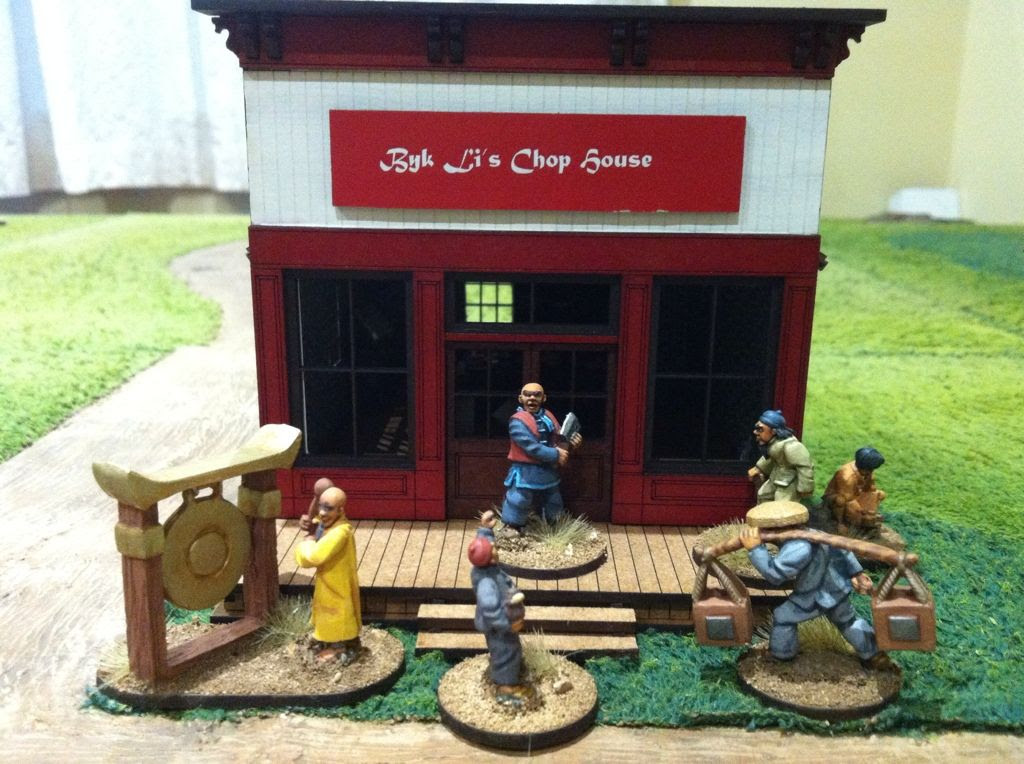 For those who missed it the first time around its a Battleflag MDF kit which I customised for the chop house. The figures are from Pulp Miniatures once again. The interior is furnished with resin pieces from Frontline and the paper on the walls is a web down load of Dolls' House patterns I found, suitably scaled down ~ 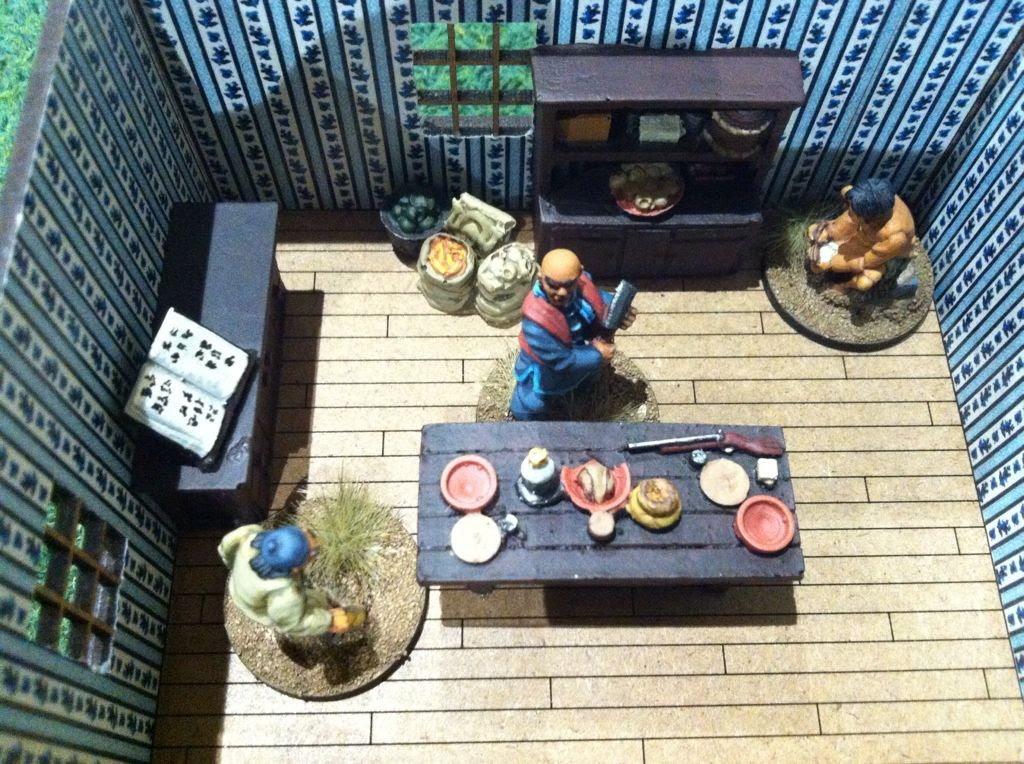 Of course, the table hides a trapdoor in the floor leading to an underground lair where evil plots are hatched and villainy planned!
Posted by David at 09:18 6 comments:

The Sacred Drum of Onomoro

An unusual event here in GHQ with an evening game! Phil had to drop Di off in the city centre for the theatre and had three hours to kill before picking her up again, so we decided to use the time for a game. We can't actually remember when we last resorted to an evening for a game. Odd how life's changes sneak by without you noticing them as you get older. I decided on a return to Japan in the Age of Wars for our game and set up the table with four objectives held by Onomoro for Shiro Komodorisai's forces to take ~ 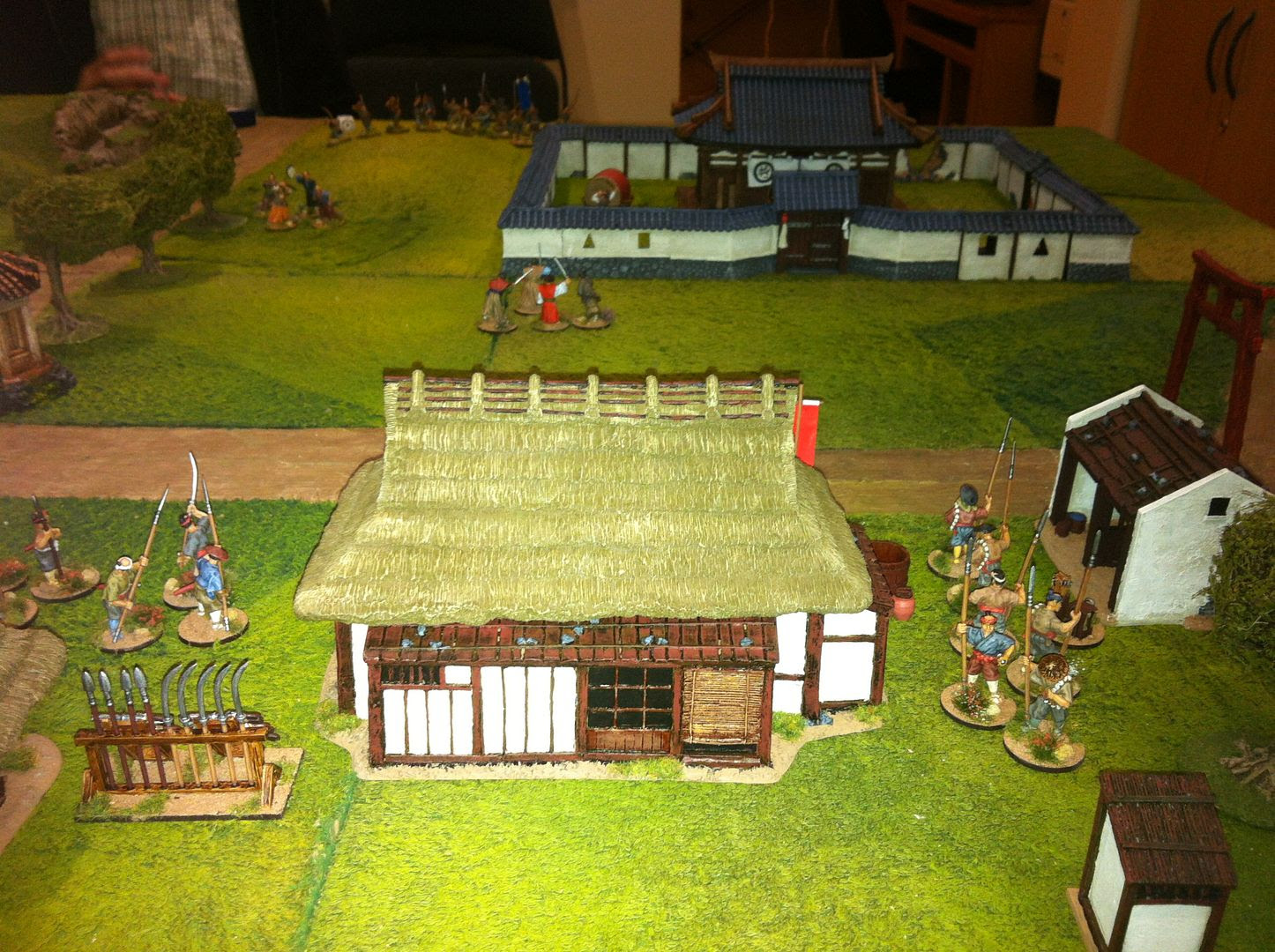 Half on Onomoro's force starts on table around their master's home, and half starts off table, like Shiro Komodorisai's force on the opposite table edge entering on the road on their card being drawn, although the 'Tea Ceremnony'/End of Turn card put a stop to that in the first turn! 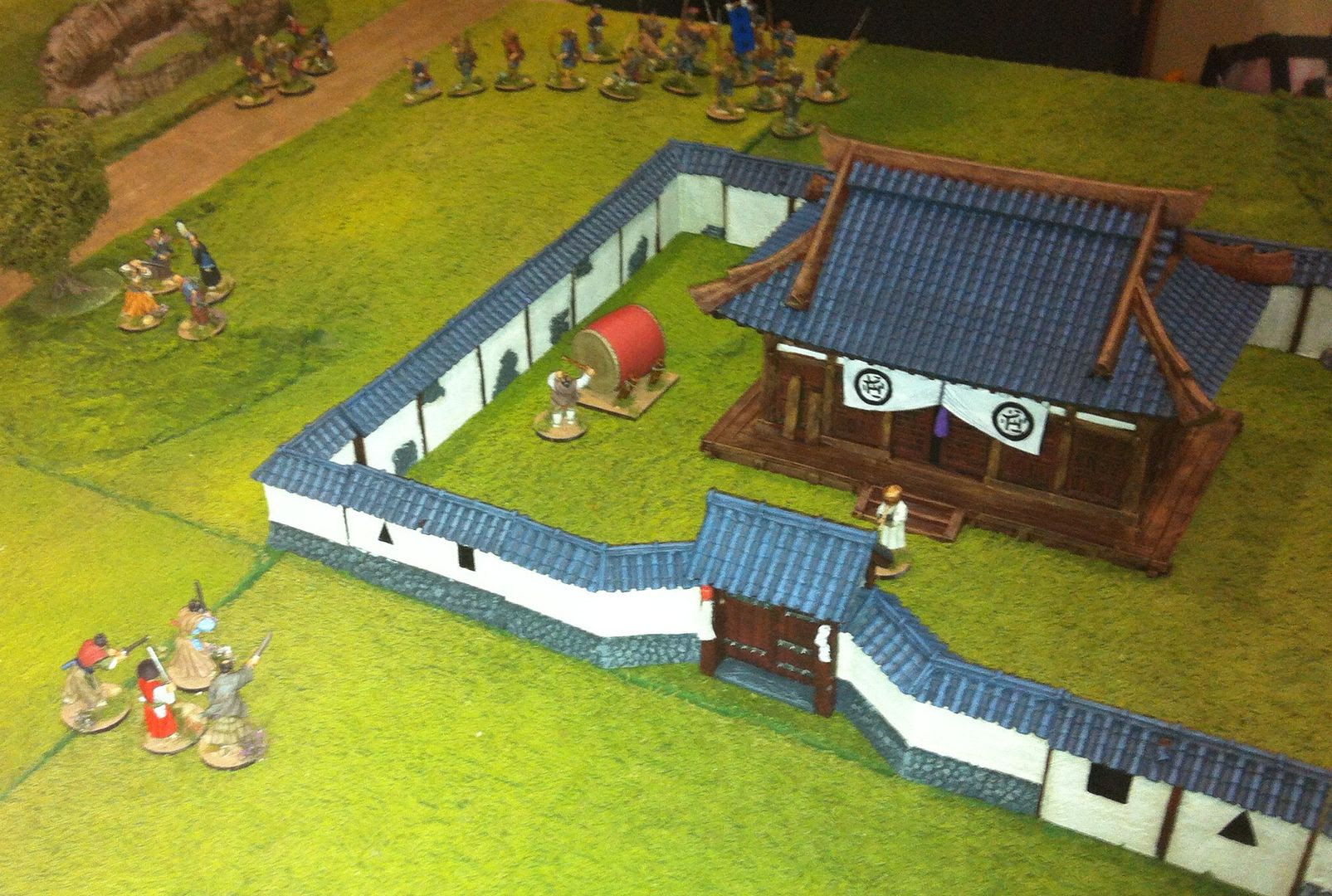 While the lowly Ashigaru {and any peasants in the game} have only one card in the game deck and so approach the action in a more measured {or reluctant} way. One of Onomoro's units armed with long spears is making for the temple enclosure to head off any attempt to seize the main objective of the sacred drum ~ 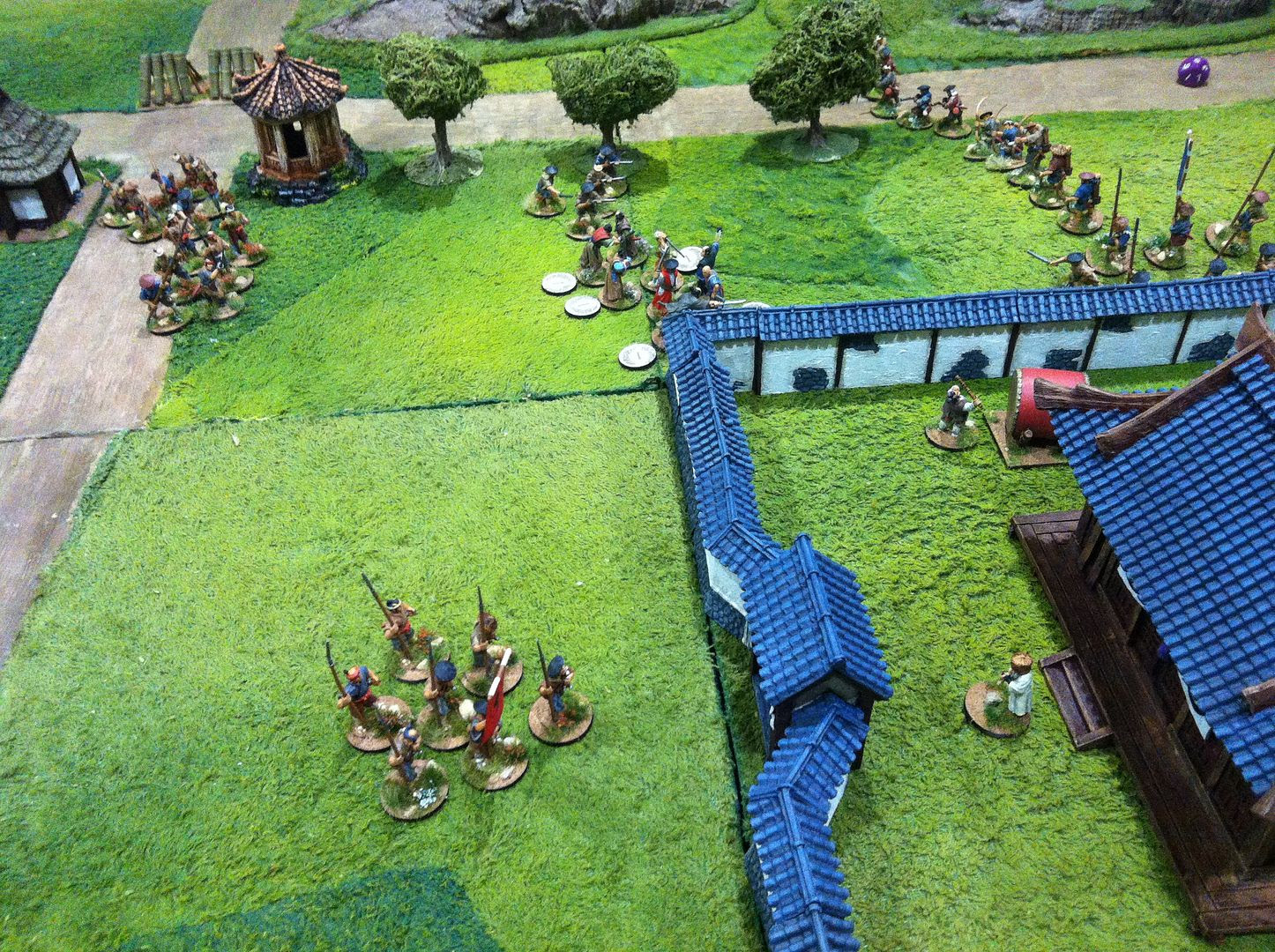 As the picture above also shows, Shiro Komodorisai's  Ashigaru armed with bow and teppo have made it onto the low rise overlooking the temple precinct, thanks to excellent card draw sequences for them, while most of Onomoro's men are still trying to get into position. The spearmen in the Temple precinct are all that stands between the enemy and the sacred drum, the main objective of the game ~ 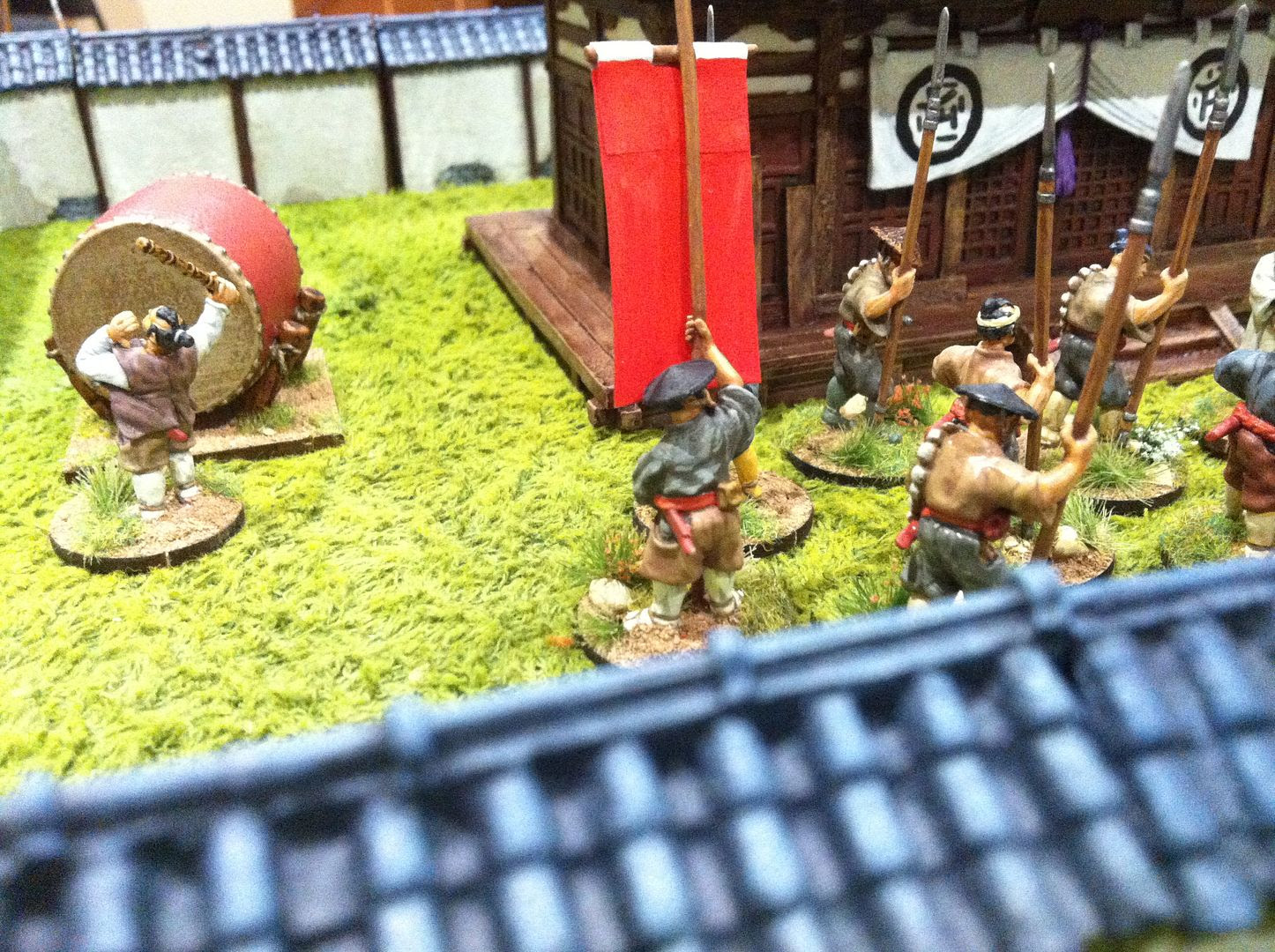 Both sides are struggling to control the approaches to the Temple's main gates and to Onomoro's home, where the three lesser objective of weapons are located. Shiro Komodorisai's Ashigaru have joined the ongoing combat, as have Onomoro's, and confusion is all around ~ 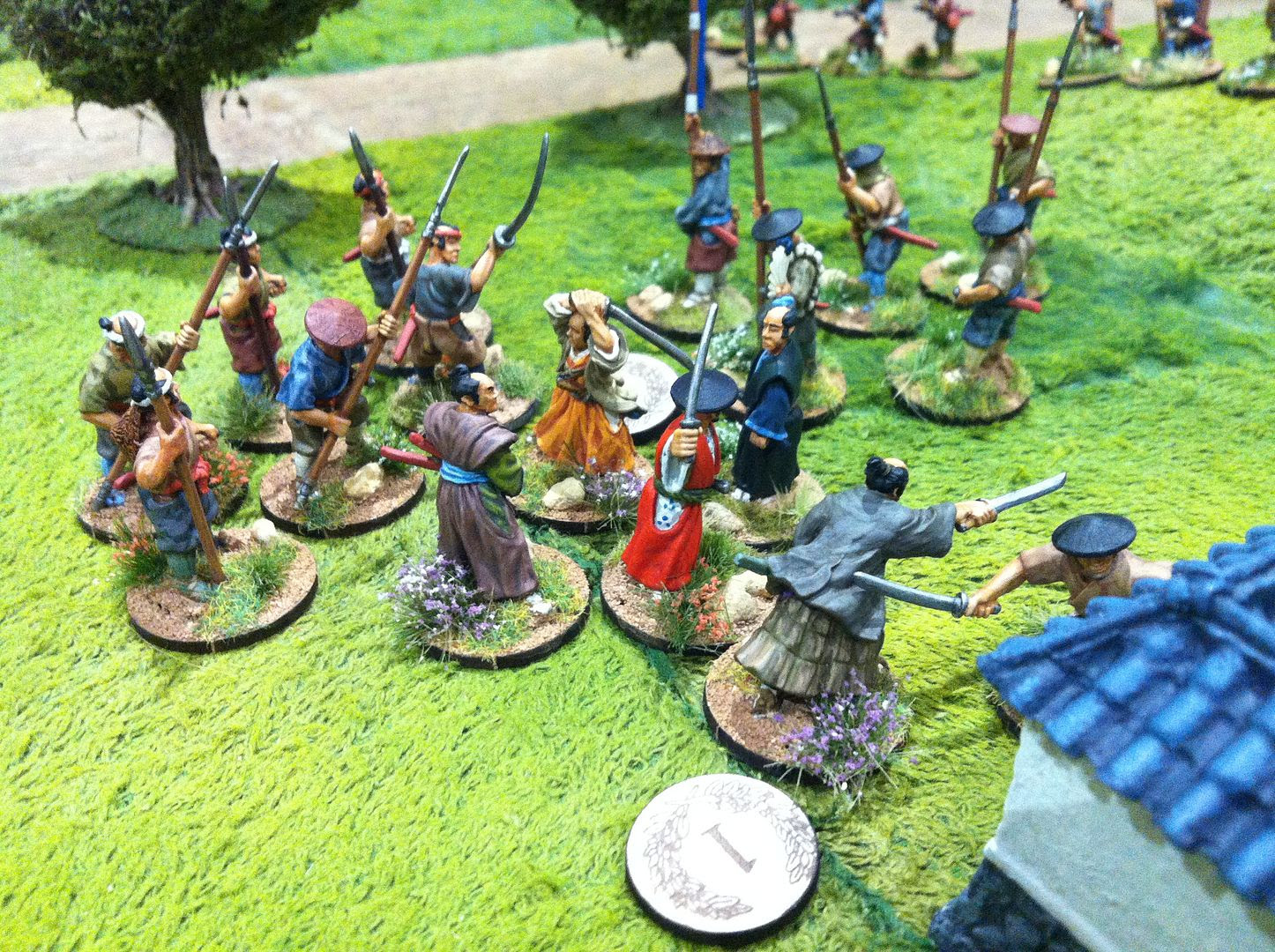 Each figure in the game can sustain a number of wounds before being removed. They are not 'killed' of course, merely too badly injured to continue the action. Both side's Ashigaru, having lost 50% of their strength in combat have to test their courage and, unsurprisingly they fail! They flee from combat, although each turn without contact with an enemy allows them to rally and recover their courage (although not in this game as it happens!) Soon Onomoro finds himself alone facing his nemesis ~ 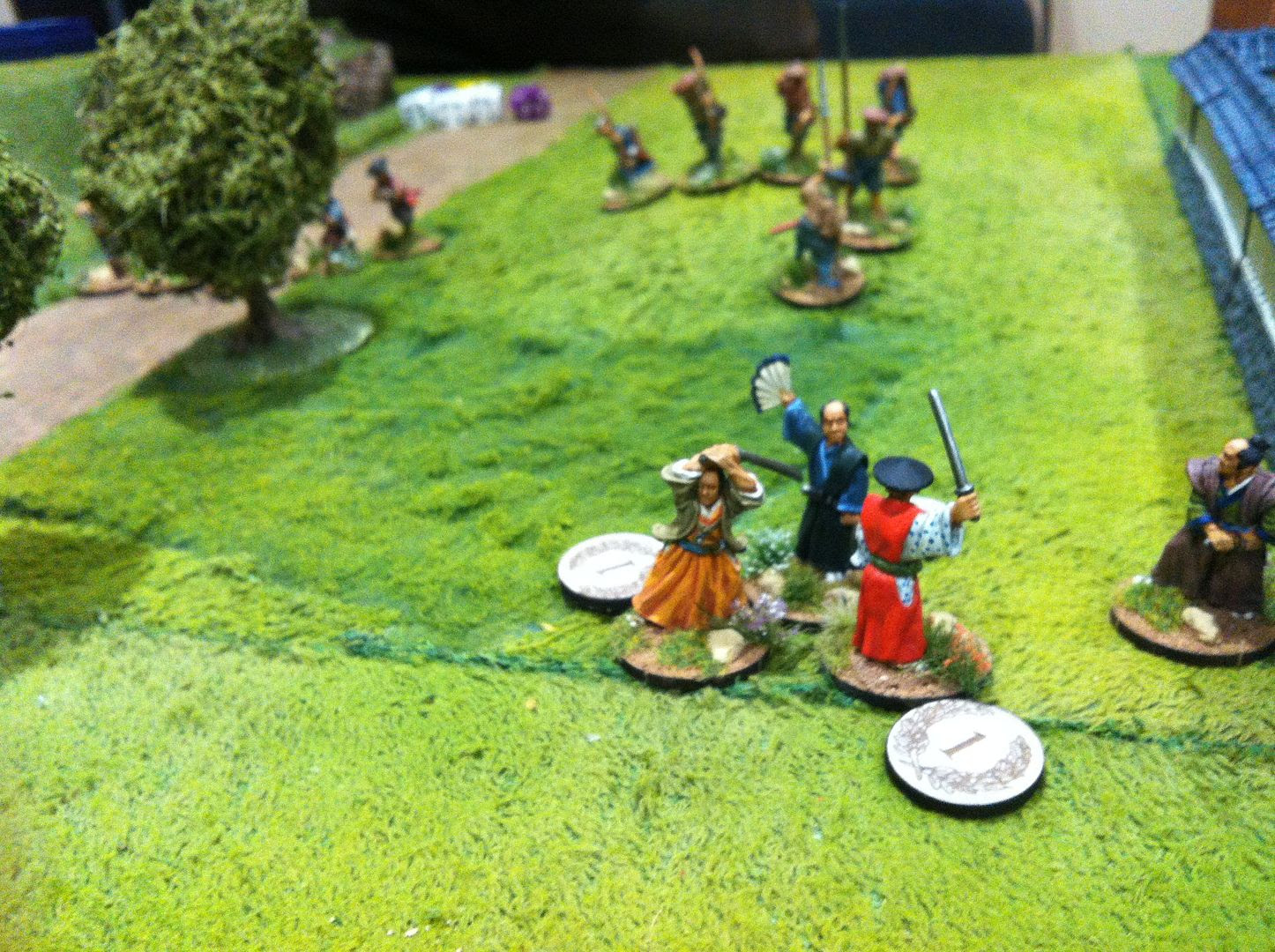 Although the main hero of each side can stand five wounds before his courage fails and his Samurai retainers three wounds, the odds are stacked against Onomoro now as a third Samurai attacks him ~ 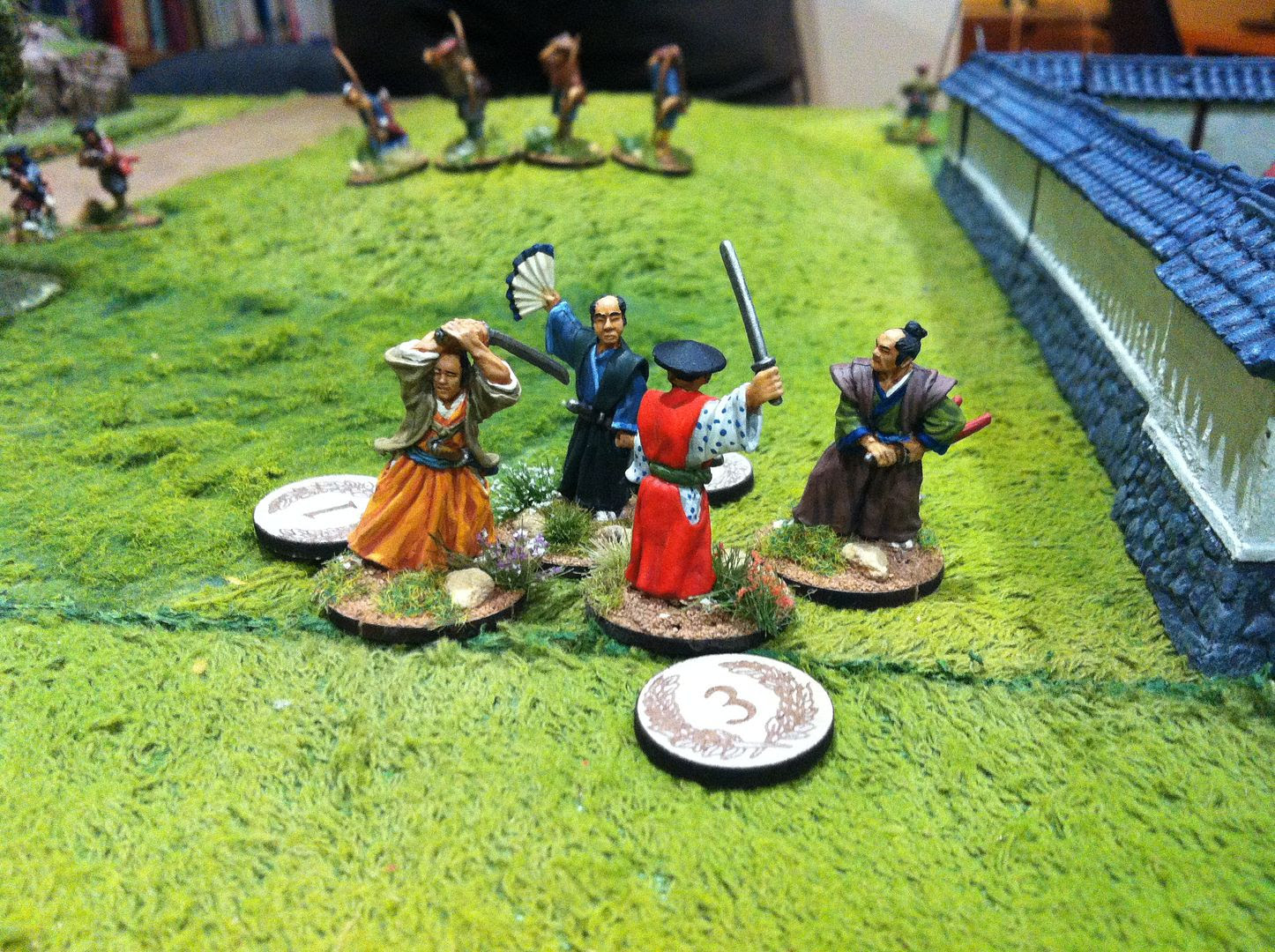 Our hero already has three wounds from the ongoing combat but faces his fate with courage as you'd expect. In the meantime, Shiro Komodorisai's other spearmen have been approaching the side gate to the Temple precincts ~ 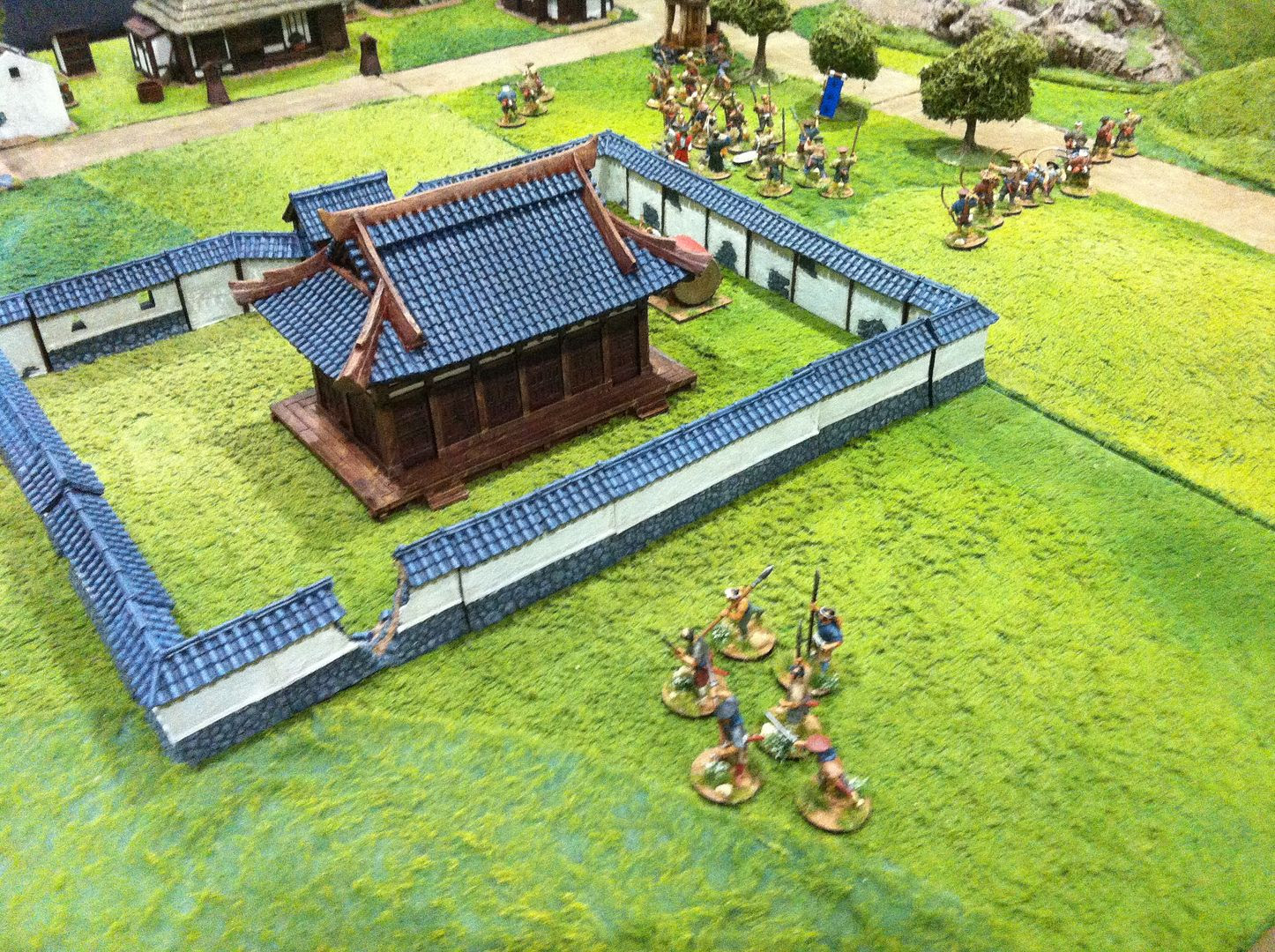 However, they need not fear entering into combat as Onomoro is finally struck down ~ 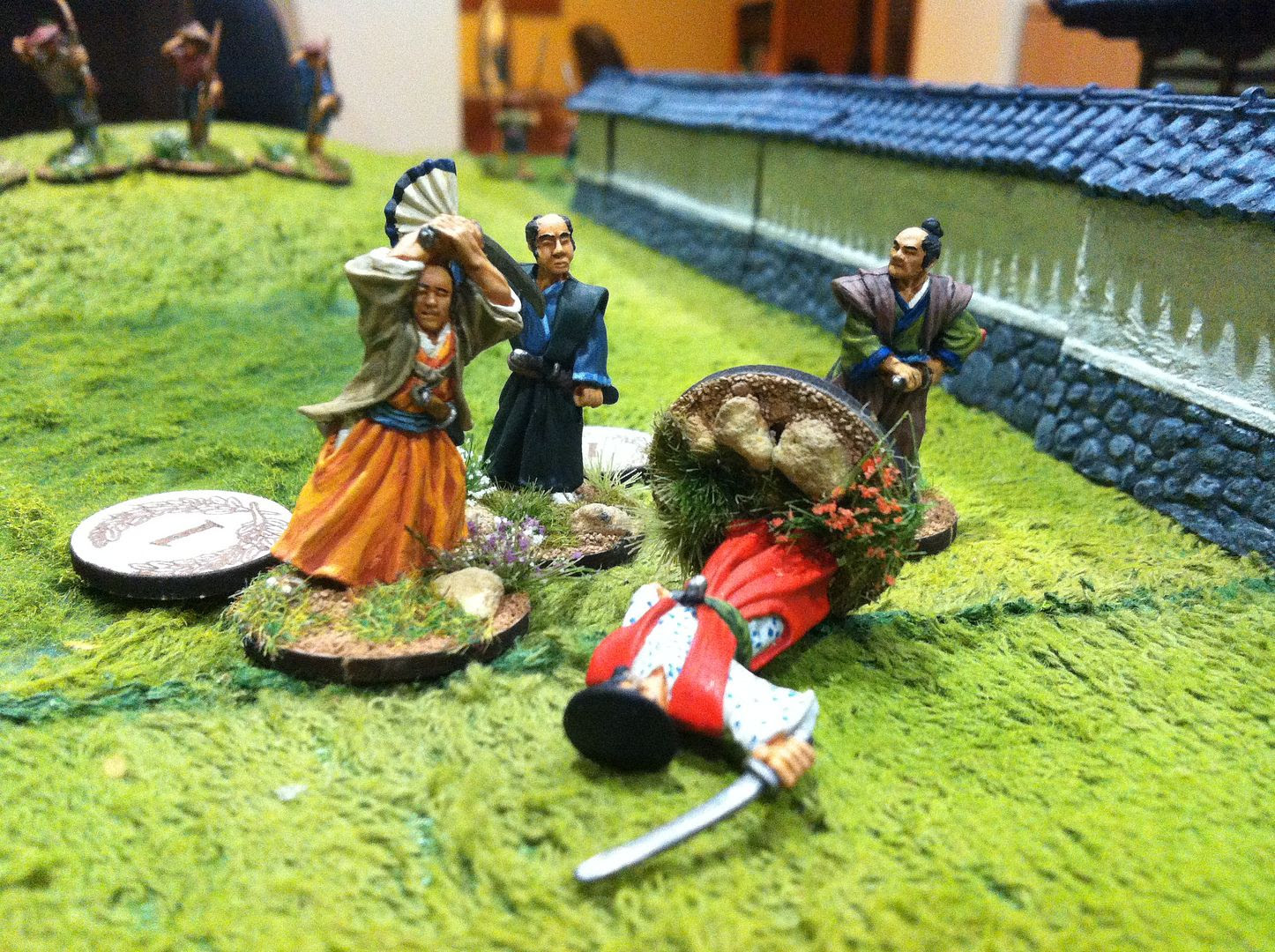 With their Lord and Master removed from the game all remaining units must immediately test their Courage against their rating to determine if they will continue the fight! With Onomoro's Samurai and three units of Ashigaru already out of action its really a foregone conclusion and of course the remaining unit in the Temple to defend the drum also flee! A decisive win for Shiro Komodorisai and his force.
The figures are all from my small collection and are from the Museum Miniature's range. Most of the buildings are from John Jenkins Designs, although the small wayside shrine is from an Aquarium range at a local garden centre.
The rules use Dx10s for the hero, Dx8s for the Samurai retainers and Dx6s for the rest in combat or firing, and for all figures when calculating movement variables. They are progressing nicely we feel and give a fast flowing game, in this case lasting about an hour and three quarters, with a feel for the action rather like the classic films of Japan's age of the Samurai. There's a lot more work to do still, but I'm hopeful they will be ready in 2015. We shall see, as the wise man would say...

Not much has been happening on the gaming front here in GHQ of late: Jon has been very preoccupied with work and domestic matters, leaving him less time for our hobby; Phil has been away "Oop North" on a well deserved break after a difficult family time; John has been to the USA on holiday to celebrate his and Sharon's retirement from teaching; and me, well, I've been painting steadily this month, but so far nothing finished to show. I have also though been tackling my figure stockpile, readying things for the winter when I generally seem to paint a little more, I suppose with fewer outdoors attractions to lure me away. Of course, I don't really have the proverbial Lead Mountain of wargamers' lore, as Phil once pointed out its barely a pimple next to his and Jon's for example. So, with no completed stuff to show really, here is a pictorial overview of my very own Lead Pimple. I should perhaps forewarn you that my approach to figures awaiting the brush will not be to everyone's taste. First a general overview in three pictures~

Now, for any who are interested in the detail rather than the broad brush approach of those pictures. Firstly, for my true and abiding interest ~


Some assorted odds and ends which may, or may not, ever be painted ~


For the Wars of the French Revolution project I have rather more in the waiting queue than I thought! But, never daunted I have one French battalion almost finished now! Three more to go now!
For the Allies ~


Now I have no doubt that some may find my approach to managing the painting queue daunting. I have been approaching The Lead Pimple this way now for several years and have found it motivating and encouraging to have them all prepared and bluetaked to their bases, or even glued down and the bases textured in the case of single figures.Whenever I get bored with something, well, there is another project, unit or group ready for the brush and on we go with no delay and a chance for the muse to go AWOL! And we all know what a slippery little blighter that can prove to be...
Posted by David at 06:50 8 comments:

The Battle of Kilmenne Moor

Jon and I have recently been able to resume semi-regular gaming again after a longish hiatus due to real life issues. Our most recent effort has been another in our series of Wars of the French Revolution hypothetical games set 'somewhere in Western Ireland', the Battle of Kilmenne Moor. General Le Blanc was attacking the demoralised army lead by Wytherin-Fyre, one of Great Britain's less renowned generals shall we say, having defeated him in previous encounters recorded on this Blog in earlier times. The figures from my {slowly} growing collection are mostly by Trent Miniatures, with a number of Front Rank figures for variety. The rules we used were 'Maurice', with a number of minor adjustments for the slightly different period tactics of the French. What follows  comprises a series of photos of the game as it unfolded over twelve turns ~

Its no secret amongst any who know me well that my abiding interest in wargaming terms is for the ACW. Over the forty two years I've been actively involved in our wonderous hobby I've owned three 25/28mm collections and one 15mm collection, all featuring both Union and Confederate forces and much ephemera to decorate the tabletop battlefield besides. When my increasing deafness and physical problems with my legs and back meant that Phil and I decided to give up putting on demonstration games at shows in and around the Midlands I sold off quite a lot of my most recent collection, keeping only what we needed to game enjoyably in GHQ, on a 7' x 4' table at its largest. But, you know how it goes in our hobby, I was soon adding new units to my collections. They were all Dixon Miniatures of course, I'm unlikely to be tempted away from what I consider to be still the most comprehensive and characterful range in 28mm ~ although I like some Redoubt figures, with Dixon heads added! Just  recently while attending Claymore I bought ten Dixon mounted Union cavalry for a good cause. Why do I mention all this? Well, Phil and I managed an ACW game earlier in the week. I'll gloss over the outcome if you don't mind, but if I say I played the Rebs the following photomontage of the game will fill you in on my performance! The rules we used were my own "Bull Run to Gettysburg", published by Wargames Foundry, and all the figures were from my collection.


The game was great fun and reached a conclusion in about two and a half hours, either side of lunch, in nine turns I think. The slow Rebel attack on the left through broken ground was a mistake, as they suffered too many casualties from the fire of the Irish Brigade. While the Rebels initially did well in the centre against the US Colored Troops defending Rawnsley Springs they could not press home the advantage and when one unit was broken in melee the rot set in. Failing three successive morale tests with dice throws of 1, 1, and 2 lead to the whole centre and left crumbling. The Flank attack, which was my main thrust to win the game, simply had too far to go given the sudden collapse elsewhere and we called the game to a halt, declaring a Union victory!
Despite the emphatic thumping my lads received, I really enjoyed the game! Later this week though it will be back to the Wars of the French Revolution. Pop back for a report over the weekend.
Posted by David at 04:51 2 comments: