The Spiders are roaming free...

...and the tumbleweed is rolling gently along here in GHQ! The reason for this lack of activity you might wonder? Well, Phil is poorly and Jon is busy, so I am in 'Billy No Mates' mode once more. And I can't even blame Boristhebastard this time either! To raise my spirits I thought I'd show you the Tales From GHQ calendar which I produce for my friends each year, John Aston has a full set and can tell me when this began. The theme for 2023 is the SYW featuring scenes from those games here in GHQ ~ 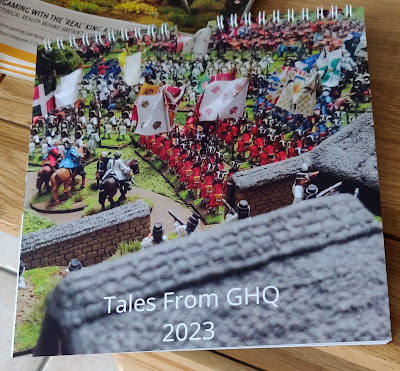 While there's been no sniff of a game even I have been keeping morale up by sitting at the desk and painting as and when I can. My main effort is in the Red Dawn pre-release sphere. I've almost completed the Soviet Airborne troops, just a dozen left to finish off, and I've started basing those vehicles Phil was able to pass to me (thanks Diane!) before he keeled over! Our deadline for completing our task is very tight, but the text is almost written now and the in game photos are planned to our satisfaction, so the short promotional piece should all reach Dan in time. Sadly I can't post any pictures of the work, for obvious reasons.

I've also been fitting into the painting efforts a French SYW infantry regiment , Bouillon, again chosen because I liked the flags! I'm on the final four figures now so they might also be completed this month with a bit of luck!