As I'm sure I've mentioned previously I have decided, all things being equal, that I'd like to expand my SYW collection over the Winter and into the Spring. To facilitate this expansion, as you might recall, I've ordered in several new units' worth of figures. From Wargames Foundry/Casting Rooms Miniatures I bought figures to make up two French infantry regiments, one being the Gardes Suisse's second regiment the other the regiment Bouillon. {There was already another Grenadier regiment in the Lead Pimple, which can either be a Royal Grenadier or a further Grenadiers de France regiment.} The flags I copied from David’s superb blog, Not By Appointment ~
https://nba-sywtemplates.blogspot.com/
In addition to the infantry I ordered some Heavy Cavalry to expand the Mestre de Camp's regiment to four squadrons and a squadron of Dragoons to form the first of the Colonel-General's Dragoons. I've already made a start on the cavalry aspect of the expansion project and so I thought that I would show the new additions, though there is one 'original' amongst them! 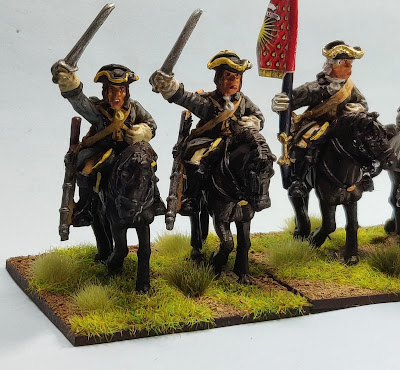 As I had a mounted drummer from the command pack spare I painted him up too and added him to a previously painted mounted officer to form a more impressive Command base for the French Heavy cavalry. Obviously I thought you'd like to see these too. 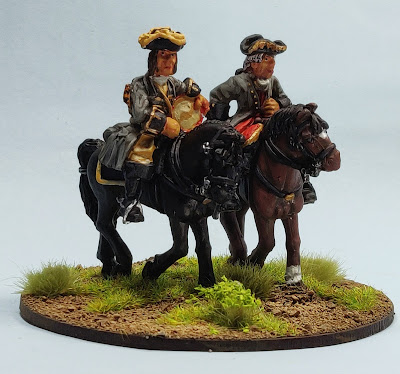 The six new figures for the Colonel-General's Dragoons' first squadron are already underway so I'd hope to show those to interested followers/visitors in the not too distant future. Keep an eye out for more news as and when...
Posted by David at 01:42