This week's game here in GHQ featured a F&IW game, the first run through for a while with the extended and rebased collection using Black Powder 2 as the rules driver. Phil, as Lord Rawnsley, took command of the Crown's forces while I took the French as Du Merde. As usual we set the game length at twelve turns, which proved a tad on the optimistic side as it happened. Before starting we diced for Scouting, resulting in the British being out scouted and deploying first. Round one to Red Jacket and Du Merde! As usual I present a photomontage to convey a sense of the unfolding tabletop drama ~

Rawnsley deploys his regulars on his left flank, while his Provincial Infantry, Rangers and Stockbridge Tribes hold his centre.

Du Merde has his right and centre for his Regulars but on his left concentrates his Irregular forces and First Nations under Red Jacket, supported by two Small groups of Compagnies Franches de la Marine.

Du Merde wastes no time in closing with the British Regulars who are lead by a Large unit of Grenadiers. Both sides find it hard to cause significant losses to their foes though 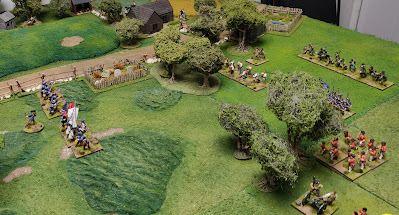 Meanwhile, in the centre, the Compagnies Franches de la Marine advance on the woods held by Stockbridge Tribes allies of the Crown.

In an almost separate battle away on Rawnsley's right flank Red Jacket leads his War Party and Woodsmen in an attack on the isolated farm defended only by some Citizen Militia and a lone Stockbridge Tribes War Party. 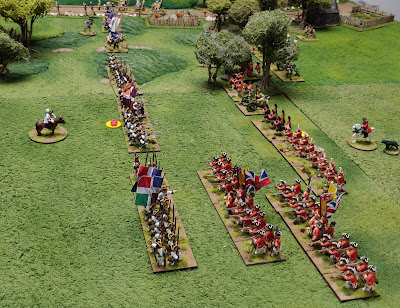 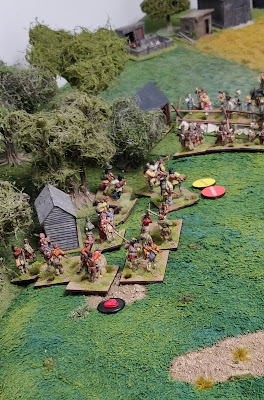 First Nations and Stockbridge Tribes War Parties clash around the cabin, with victory going to Red Jacket's warriors. Meanwhile, the remaining War Party attacks the farm supported by the Woodsmen.

Furious exchanges of close quarter musketry at last prove decisive as a unit of French Regulars breaks while their opposing Grenadier battalion falls back. It seems Rawnsley may defeat Du Merde at this point if he can press home the advantage. 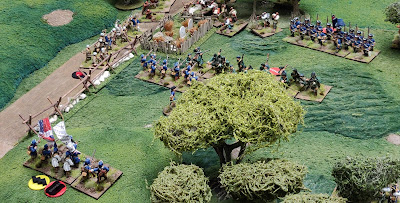 In the Centre too developments seem to favour Rawnsley's cause  as one unit of Compagnies Franches de la Marine are driven back and the second charged by the Rangers. Support comes from the South Carolina Provincial Infantry and a War Party of Stockbridge Tribes allies.

Meanwhile in the native village Father Artois extols the many 'benefits' of French civilization to his flock.

On Rawnsley's right events are swinging unexpectedly away from his control as both the Militia and the Stockbridge Tribes War Parties are routed from the field!

With the War Party routing on its right, the South Carolina Provincial Infantry falls back leaving the Light Companies in the woods exposed to the full fury of enemy fire. New Unit syndrome in play here I felt!

The defenders of the farm flee in panic before the ferocious attack from Red Jacket's warriors! 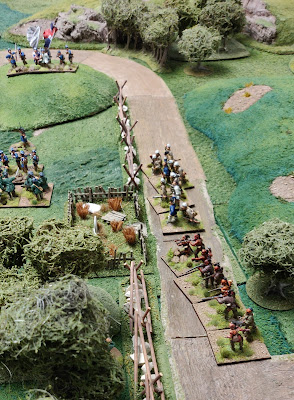 The French have secured what seemed an unlikely victory as Rawnsley's resolve is shattered like his army which flees the field. Many scalps were taken it seems this day!
The game was unexpectedly over in Turn 7 when British morale collapsed suddenly. Losses on their right and centre left the Regulars on the left isolated and Shaken meaning the army was Broken. "Vive Le Roi! Vive La Nouvelle France!"
What had started as a few figures painted for review purposes has grown into a decent fringe SYW collection for games set in North America during the French and Indian War. In the main the figures are from Redoubt Enterprises, with some Galloping Major figures added lately and the odd Foundry figure. The trees and fences are from The Last Valley while the buildings are mainly either scratch built or modified MDF kits from Warbases. I hope that you have enjoyed your vicarious visit to GHQ and might feel kindly enough about our efforts to leave a comment, all feedback is valued and appreciated. Cheers!
Posted by David at 00:44