There I was, plodding along steadily painting SYW figures for the French regiment Bouillon, when the Postie rang the doorbell. 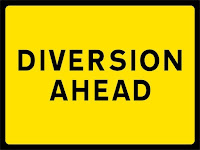 I opened the door and was handed a large brown box! Now, I was expecting this, but not quite so soon, and its arrival would bring about both a sudden modification of the painting schedule and in the scale/size of subject for both Phil and me. 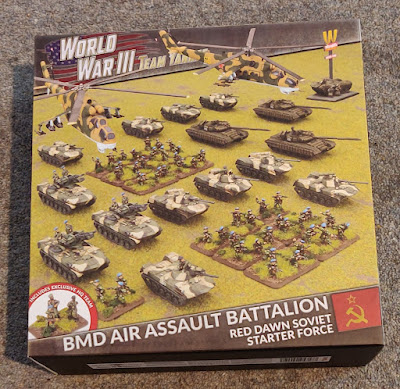 A part of the contents of this package from Dan at Wargames illustrated included this pre-release box from the new Red Dawn expansion of Battlefront's Team Yankee game, due for release in December and January according to their website. Phil and I have been volunteered/recruited/conscripted to paint up samples from the boxed set which will be used to illustrate a piece about the contents in an upcoming issue of the magazine, following on our piece in the November issue.

I did mention that the boxed set was only a part of the package's contents, so it would only be polite to reveal the other content as I'm sure some of you would want to know. I received the new De Luxe edition of Never Mind the Billhooks, in fact the note enclosed said it was the very first copy sent out so I feel more than privileged. It is available to buy now if you'd not already pre-ordered it. 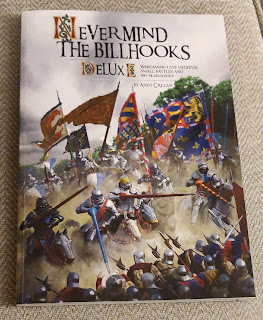 The book is every bit the professional product that you'd expect from the hobby's leading magazine and I'm confident that it will prove very popular with devotees of the Wars of the Roses and the wider late medieval sweep of wars and conflicts. Of especial interest to me of course is a section on the Italian Wars which I hope might prove useful here in GHQ.

All this means that for now progress on the SYW expansion project, currently in the shape of the regiment Bouillon you recall, will be a tad slower than expected while I tackle 15mm Soviet Airborne troops, as well as basing up all the vehicles Phil manages to process. Worse still, tomorrow 's scheduled game is cancelled, so it's all a bit solitary here in GHQ, for the foreseeable future at least. So, KBO is the Order of the Day!