The heavy cavalry for Legio VI have galloped through the painting queue so I thought you'd like to see what I've made of them. The figures are by Aventine Miniatures, the shield transfers by LBM and the bases by Warbases as ever ~

The rank and file cavalrymen are multi part figures and proved to be very difficult for me to assemble given my hand issues. I persevered with them slowly and in the end managed to get them all done. The metal used by Aventine Miniatures is hard to work, compared to the softer A&A Miniatures for example, so I used UHU with an added spot of cheap superglue. This hardens very quickly and binds the legs, torso and head parts very strongly. I had mixed success though in fixing weapons and such into hands, some needing a second spot of superglue to fix firmly. 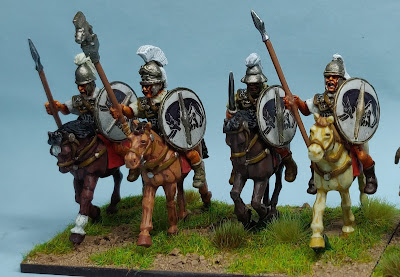 From the three packs of cavalry figures I received there's a visible size and style discrepancy between the three figures in the Command pack and those in the two rank and file packs. Having just spent a happy two hours assembling 12 of the Allied Italian Cavalry from Aventine I've come to the conclusion that my Romans might represent older figures in the range. The Allied Italian cavalry were much nicer figures and the body of the men is a one piece casting, much easier for me!
Now I have both my Aventine Miniatures Allied Italian cavalry and my A&A Miniatures Numidian Light Cavalry assembled I can get them spray undercoated and fixed to MDF pill bases ready to join the painting queue. Other good news, both my orders from Aventine Miniatures and from A&A Miniatures have arrived so I also have three Carthaginian Elephants and crew, Numidian Light Infantry, and the rest of my Allied Italian Legion figures to assemble and spray undercoat. I’ve also sent off an order for some Carthaginian veterans and some Hoplites. Looks like I have plenty to do now if we return to lockdown in the winter!
Posted by David at 06:12