Following a day or two of reflection after I'd finished off the small cabin I'd repurposed from the Warbases 15mm barn. I felt ready to tackle the second upscaling project, the 'L' shaped 15mm barn. I'd spent some time thinking about what to do with it and in the end I plumped for a combined living area and integral small barn. The six wall sections made up really easily around the provided 'L' shaped base piece and the two roof sections fitted together easily too. However, the smaller section didn't quite sit tightly on the second larger roof, but I can live with that ~ 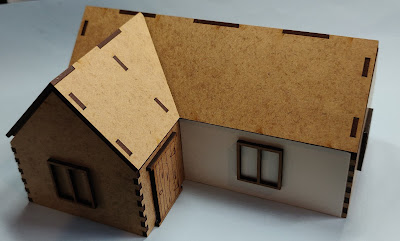 The single barn door opening on the left has been covered by a 28mm size cabin door from my Box of Bits. The longer front face had two barn door openings let into it and learning from my first effort I cut a piece of card to size and covered the whole area before fixing a window in place. This should make it easier to plank the area than it had been on the first cabin! Leaving that aside to dry and harden off thoroughly, I decided to set about applying shingles to the two sections that make up the roof ~ 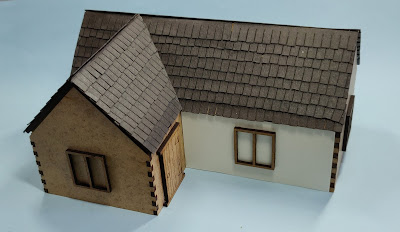 On the small cabin I'd previously completed I'd applied the rows of precut shingles with UHU glue for a quickish fix, but for these I applied the shingles with PVA which I also liberally coated over the exposed service to give them greater strength. When hardened off the projecting pieces can be easily cut back to give a better finished look. Leaving the roof sections aside now, the next phase is the planking, which is really a long winded and fiddly task that I usually split over two or three sessions. At the end of that process it looks like this ~ 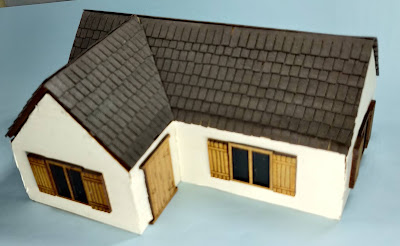 When the whole has dried hard, usually overnight I've found, the next thing I'd do is to fix it to an MDF base for ease of handling when painting. The trouble is Warbases are closed for the duration and I don't have a base. However, Sue came to my rescue with some very thick card from her crafting stock, so I cut out a suitably sized piece from the sheet and fixed the building to it with generous amounts of UHU glue ~ 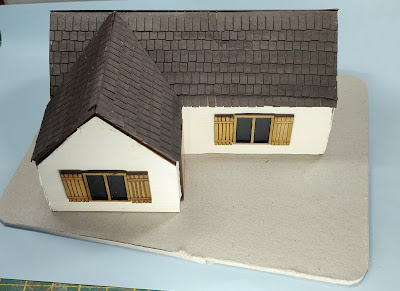 The next stage in progressing this small farmstead is the painting of the building. Where the small cabin was going to be whitish, this one will have the lived in look of untreated wood, so it has a burnt umber base for the whole piece including the roof sections. Then a couple of progressively light dry crushed from Foundry Arctic Grey shade and mid tone. The base is textured with Basetex Dried Earth, which I use for all my ACW bases and static grass Nd clump vegetation are added to taste along with a few scenic bits I had lying around, as you do. The finished farmstead ~ 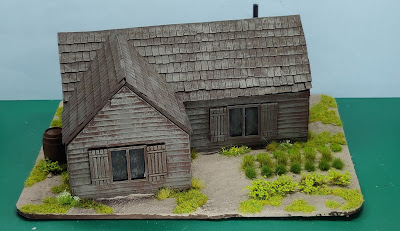 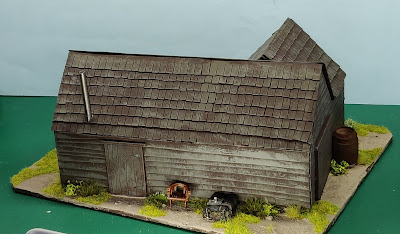 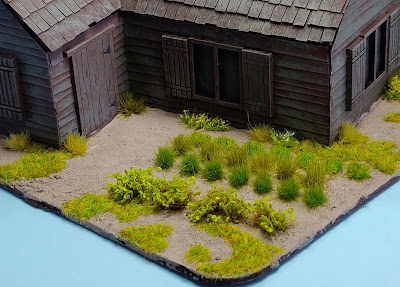 Finally, a couple of pictures of the finished piece in situ in GHQ with part of my War of 1812-15 collection ~

Making these two buildings made a refreshing change from plodding on with figures, so much so that I'm well on with another ACW unit, the 39th New York Volunteers, otherwise the Garibaldi Guards.
Posted by David at 03:19