This is the last of my cavalry additions for the SYW expansion project, a French Heavy Cavalry Regiment, Orléans. As with the rest of the French army the figures are from Casting Room Miniatures/Wargames Foundry. I chose them simply for the white coats faced with red, mainly as I had some French red cavalry standards in the pile! {I hope any genuine SYW readers will forgive an elderly chap this one time!} Anyway, as usual here they are in all their technicolour splendour  ~

I had to make a small number of compromises with the painting of these figures, mainly the complex lace pattern on the horse cloths -blue,white and red, complete with checks - simply too much for my elderly eyes and hands now. I settled for red cloth edged white, and that will have to do. A few closer pictures, so for those of a nervous disposition it’s 'time to hide behind the sofa'! 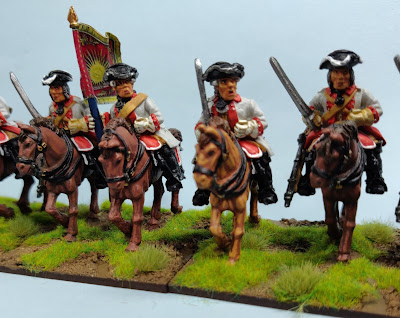 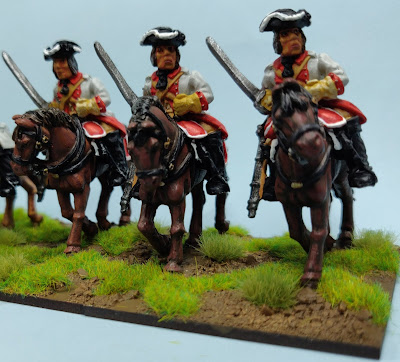 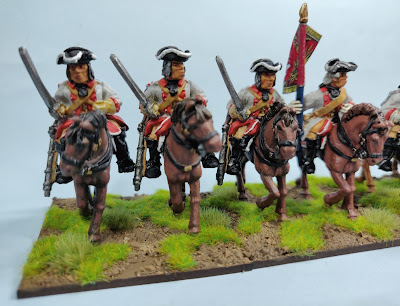 I have one Casting Room /Foundry French Infantry Regiment left, and I’ve started them as the Royal Ecossaise. I was going to use some Cran Tara figures I’d bought especially for them, but, although they are lovely figures, they are simply minuscule alongside my other figures. There’s a moral there for us all: "Never buy anything without doing proper research first!" Proof, if it were needed, that one is never too old to learn! I recently ordered three sets of SYW flags from GMB Designs, so expect more SYW reinforcements later in the year. Meanwhile, after the Royal Ecossaise it will be back to the AWI with Lee's Legion infantry and the Volunteers of Ireland
Posted by David at 23:33