"I saw something nasty in the woodshed, I did!"

It's surely no secret amongst followers of my

modest efforts that I'm a great fan of the bases, buildings and extras produced by Martin and his folk at Warbases. Even when they produce stuff of no immediate relevance to my projects old or new, I always enjoy appreciating the ingenuity and craftsmanship which have bought then to fruition. So, I made up my mind to buy a few general items to enhance my terrain over the course of the year. I started with a woodshed which I collected at Hammerhead in early March. It fits nicely together with no fuss and is robust enough to survive my young granddaughter's attentions! 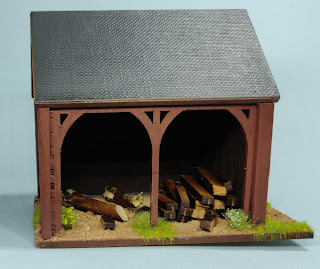 I painted the inside walls Foundry Musket Stock Brown shade and the outside Spearshaft shade, with the roof Charcoal Black midtone. I washed the walls with Games Workshop Agrax Earth shade and the roof with Nil Oil wash. I based it on a 80 X 50mm MDF base, which I textured with my usual railway ballast mix, washing it with Crafter's Acrylic Country Maple. I added some sawn timber using MDF offcuts and a couple of short logs which Phil gave me a while back. 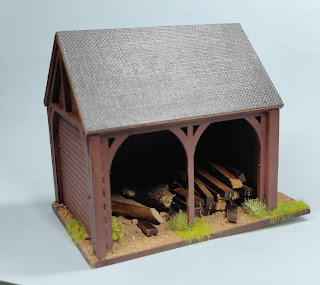 I think it will do duty from the ECW through to the VBCW, in America as well as here in Britain and Europe. For the next addition I've ordered their stable, so hopefully that will arrive this coming week.
While the MDF building theme was in full flow I spent a couple of happy hours building the first 15mm purchases for my coming Cold War Gone Hot project. I bought two German Houses from Laser Craft and four factory buildings from Sarissa Precision. To complement the houses I ordered a large and small barn from Warbases so they can stand as farms. If they make their new Prussian buildings in 15mm, which they should to fill an obvious gap in the 15mm market, then I'll add those too. Meanwhile, I've completed 12/20 figures for my last, for now at least, SYW expansion infantry regiment as the Royal Ecossais. I hope they will be ready to take the field for the next game in GHQ.
Posted by David at 03:01