I’ve recently completed the first of my additional infantry units for our SYW games here in GHQ, in the shape of the 23rd Foot, the Royal Welsh Fusiliers. As with all the collection to date the figures are from Foundry, a range which embodies the phrase ‘Marmite for Wargamers’ probably more than any other I’ve come across. I used the Grenadier figures to proxy Fusileers and the British Infantry Command set to make up the unit, together with a mounted Officer from the Generals set as the Colonel ~

This is a considerable compromise in terms of accuracy, but that doesn’t worry me overmuch, these being toys in a game after all! With hindsight for the mitres I might have been better to fill in the Royal cypher rather than simply overpaint the Prince of Wales feathers, but on the table I’d be surprised if anyone noticed. Alternatively I might have used the Crusader Grenadiers as I’ve seen elsewhere on the net, but I stuck with Foundry for the sake of the look of the game ~ 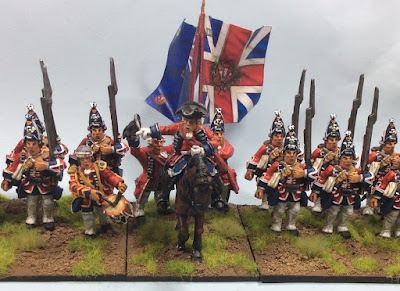 Clearly the decorative embellishments on the mitres are beyond my skills and patience, so they are best viewed from the usual gaming distance, for instance I omitted the greenery flanking the central motif as well as just suggesting the white horse at the mitre’s base. Not for purists and lace counters, but they will do for me, and I hope for my chums who command them.
I’ve also added a cavalry regiment to the British in the shape of the 6th or Inniskilling Dragoons ~ 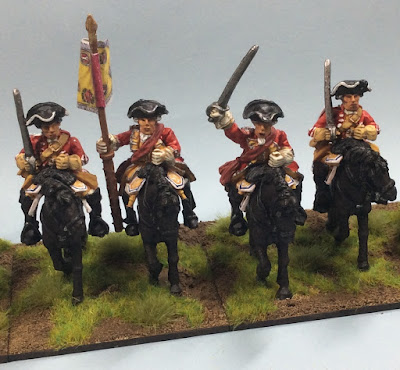 For the French part of the project I’ve added a second Irish Regiment in the shape of regiment 93, Clare. Again these are Foundry figures with flags by GMB and MDF bases from Warbases, who else ~

I use the same red foundation and old Games Workshop red ink wash as for all the other red coated units, though in this case Foundry Bright Red mid tone rather than their British Redcoat mid tone for my British figures, then highlighted with the same colour. My Wild Goose element is now Wild Geese! I’m planning to add a command base for the Wild Geese next, but I’m short of some undercoated  Officers on foot, so that awaits completion in due course ~ 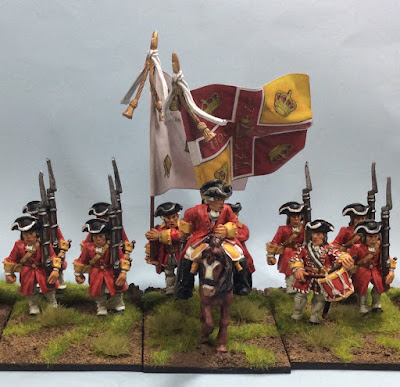 Originally I aimed at 12 figure cavalry regiments, but found things a bit crowded on our table here in GHQ at times, so in the expansion phase I’ve reduced this to 8 figures in a Regiment. There will be another British regiment in the form of the 2nd Horse, despite them serving in Ireland for the duration, and a further French regiment, Orleans, merely because I liked the white faced red uniform coats! I should probably stop there before I upset SYW enthusiasts further...
Posted by David at 03:15