After a mad 30 days or more of SYW figure painting I’ve veered back into the Italian Wars briefly, with firstly the addition of the camp scene or two, previously featured here on my Blog, and secondly an additional Command Stand for when we use Pike & Shotte for games ~ 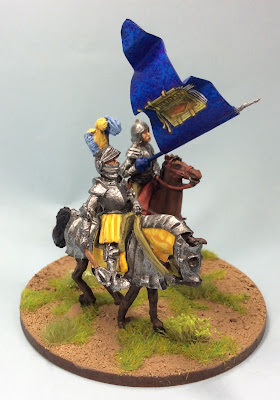 The two figures are from Bicorne Miniatures, the first I’ve bought from them for this project. They appear to me to be the former Connoisseur range sculpted back in the day by Peter Gilder I presume. By contemporary standards they would have been fine figures but frankly by today’s standards of figure design and sculpting they appear primitive. Never the less they will do the job just fine for me and I would add that the mail order service was nothing short of fantastic, turning round in three days from order to receipt just after Christmas. Other firms might take note of this! 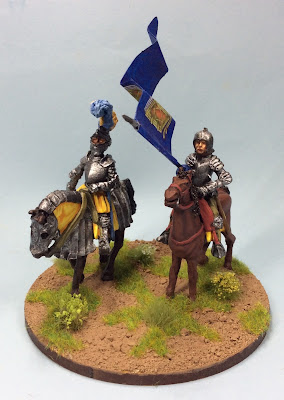 In the Lead Pimple now I have two additional Italian Wars units, both early Landsknecht pike blocks from TAG. I hope to add these to the project during the Spring. For the interested they were partly the reason I bought the two figures from Bicorne, as I ordered three packs of steel pikes from them, the North Star ones having changed to what seems to me an inferior product.
Posted by David at 04:29