Mad as a bucket of frogs!

On Wednesday I went over to East Stoke, near Newark in Nottinghamshire, specifically to visit Wargames Foundry and spend some money on figures. You would be entitled to ask me, why? It’s not as if I don’t have anything to work on in The Lead Pimple after all. In fact, at my present rather reduced output of between 30 - 40 figures in a calendar month I worked out I had enough to occupy my painting time until July 2019!
But then I don’t suffer from any delusions about my own approach to the hobby, I’ve always been prone to look either for new periods to dabble in - the VBCW being a prime example - or worse still to expand existing projects far beyond the figure and unit capacity of the table in GHQ - the ACW anyone? In fact, one constant in the past 45 years of being a wargamer has been the constant churn of out with the old and in with the new, though the arrival of GHQ as a dedicated gaming room in 2004 has somewhat ameliorated this trend.
So it no surprise to me that when the budget allowed I was off to shop! This particular expedition had its origins earlier in the year when Phil and I revisited my SYW collection. More cavalry was an obvious development, either by reducing units from 12 figures or by adding new units. I should perhaps confess that the collection itself began entirely by accident, though Phil was indirectly to blame! I had decided to dabble in the First Carlist War with the then new Perry Miniatures range, I’d worked it all out and was ready to splash the cash. Then Phil showed me his latest painted figures! You’ve guessed of course, the First Carlist War range in question! So, effectively on the rebound, I turned up at Foundry with cash burning a hole in my wallet and was seduced by the splendid range of French and British figures sculpted by Rob Baker. I bought the bones of both armies there and then and have added steadily to them over the past few years.
Now, the range itself is to wargamers as Marmite is to toast affectionados, but I’m firmly in the pro-range camp as I feel the figures on painting really capture the mid C18th look of military men stout in heart and body! Whatever, I added to the armies on this visit: French Line Cavalry, destined for Orleans; French Fusileers, destined to be Regiment Clare for my Wild Geese; French Mounted Officers - you can never have too many Commanders after all! For the British: Grenadiers in mitre to stand in for the 23rd Foot; British Dragoons, for the 6th Inniskillin Dragoons; and more Mounted Generals! They won’t be reaching their day in the sun until next year, but in the meantime, here are some I finished earlier ~ 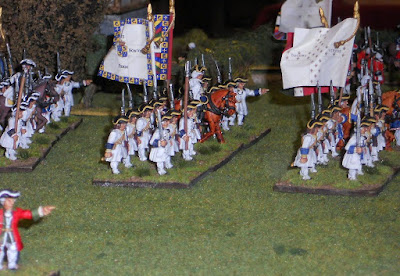 Like me, you will have to wait until next year to see the new units hit the table. In the meantime, back to the 43rd Foot for my AWI collection...