All Quiet in GHQ

As I was on holiday for half the month, its only fair to say that its been relatively quiet here in GHQ in the main.
My painting total for May is a paltry 32 figures, all 28mm of course, and for a variety of established projects. The major part of this small output has been Foundry Indian Hill Tribesmen, the Bhurpas of course! I got them for £10 at the recent Open Day in the form of two Bargain Blisters. They have enabled me to add seven bases worth of figures to the Indian Mutiny forces and the long needed Sniper for the Mutineers ~ see earlier Blog entry. 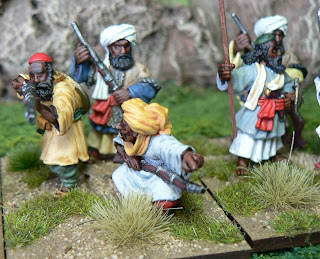 Detail of the Bhurpa warriors.


They are amongst the nicest sculpts for the old Foundry Indian Mutiny range, a range which itself is one of the better examples of the Perry brothers work for them, as remarkable for its completeness as for its quality. On the subject of figures from the Nottingham giants I've also finished a final SYW base to bulk out the 3rd Foot Guards I was working on.
From Bicorne, a firm I have n't bought much from besides my ECW artillery, I've painted another ECW General. Strangely I can't recall who is was/is, but he is one of my Parliamentary Generals of Foote now. 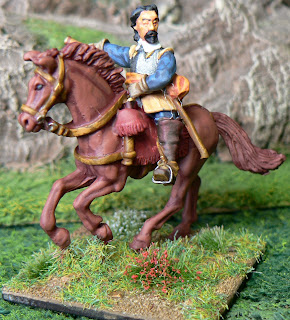 Not my best effort, but he will do!


Other bits and bobs make up my total for May: Cromwell by Warlord Games for the ECW and three Rorkes Drift Defenders from Empress ~ all featured in earlier Blog entries.
I've only managed three games this month, although I can say, with some surprise, that I won them all! Over at Jon's we played two parallel War at Sea games: a strategic level 'Hunt the Fleet' game and an 'Island Hopping US assault'. Moving between two tables in different rooms is certainly taxing on the old brain, but great fun never-the-less. One of Jon's masterpiece games I think. Back in GHQ Phil and I played a small trial game of A Crowning Mercy, my prototype rules for the ECW, which resulted in a very satisfying and close win for Obadiah Bykleigh's small army. The rules seemed promising but much needs to be done still.
Finally last Friday, as I reported in the previous Blog entry, Dan from Wargames Illustrated came over to GHQ to take pictures of our 1940 Operation Zeelowe game, "Lord Emsworth's Last Stand". As Jon had to leave just before the climax of the game I got to be the winning Germans in the last turn! So, three out of three I will claim for this month!
Of course, for those of us in the Midlands area of the UK the end of May is synonymous with the first Partizan show of the year. I always look forward to these two versions of the show as the highlights of the year in some respects. Perhaps I endow them with too much expectation as I'm often of late left somewhat let down by the experience. This year I set out with not even a List to guide my shopping, let alone an idea of the games. Perhaps as a result of this ambivalent approach I enjoyed the show more than usual. For me the standout games were from: The League of Augsburg, showcasing Beneath the Lily Banners and the accompanying figure range from Barry Hilton; a Turkish medieval game from Derby Wargames Society; the Bunker's Viking and Skraeling game; and, finally, the Perry Brothers Wars of the Roses game, the latter despite the plastic figures! I even managed some retail therapy in the end: another ECW Regiment of Foote in the form of Perry Miniatures from Dave Thomas' stand; the Pike & Shotte rules from Warlord Games;a pack of Perry Ninjas; and finally, a pack of pikes from Coritani. All in all a good show I thought, especially as so many chums from Scotland had made it down to the show ~ Hello Kevin, David, Barry, David and Colin!!
Of course, the weather in the second half of the month might have infused me with more optimism and satisfaction than May has deserved in GHQ, but it would be churlish to complain after April's blast!
Posted by David at 06:32