Pleasing some of the people...

...some of the time, as the saying has it. I've recently had the pleasure of reading reviews of some of my published rule sets in the wargames press, together with following several other threads in  the blogosphere from those folk who have played out the rules across their tabletop battlefields. I've had some experience in writing reviews myself, mainly in the former incarnation of Wargames Illustrated, so I have a grasp of the constraints reviewers contribute under, but its still interesting I find to read what folk think of my work. On the other hand, a tiny minority of comments in the blogosphere can reveal a rather more unwelcome side to the hobby: namely the view that a product is falling short of perfection in some way or another. Its almost as if this small minority again feel that we are entitled to a perfect, effort-free hobby experience now we have spent a few pounds on a product.
Some of the things which many folk have commented on have been very encouraging I've found, reinforcing my view that there is a strong market for straightforward rules ~ some call it an Old School approach, but I prefer straightforward as a description myself. {I've often thought that my approach to things like rule writing is a result of thirty years spent teaching youngsters, where the main trick always seemed to me to be rendering the complex down to the simple, so that the children could build a firm foundation in their learning which could then be appled to other more complex issues.}
Now, with a wider perspective, just pause for a minute and reflect on how ridiculously well served we are for such a small hobby ~ if not in girth anyway ~ by such an army of talented folk who provide everything we need from figures, through uniform guides, potted histories and rulesets, to buildings and terrain pieces. We can even get our figures painted for us if we want, no need to do anything for ourselves at all. So I think its a concern for our hobby in general when I read that a person found that any product was not what they were looking for expressed in a negative tone as if to apportion blame. We could always do our own research, make our own figures, build our own terrain and write our own rules ~ as indeed many still do ~ like the founding fathers of our hobby. But of course the dismal johnnies, as I like to think of them,  won't do any of those things, prefering to moan on when someone does anything for them, never satisfied with anything really. Of course, you see this particularly in respect to releases of new figure ranges, when they can be minutely discected for faults and failings, without any thought to the fact that they will be viewed from several feet away during a game.
I've come to think of this as a Holy Grail Syndrome in our hobby! Its a view I've arrived at over forty years of wargaming and exposure to all sorts of gamers both here at home and in the USA. I'd like to think that I'm a positive person, at least in hobby terms, who always enjoys looking over new things which might enrich my gaming experiences but perhaps I am out of step with everyone else here. So, if I like something I'll say so loudly and enthusiastically; if I don't, I'll keep my counsel to myself and let others make up their own mind.Now, this is not a rant, nor is it a diatribe against free speech; but rather a plea for a little perspective in our response to new releases of any kind. 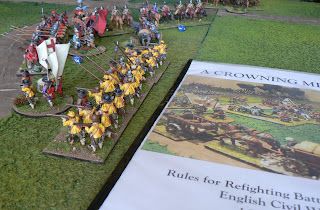 The encouraging feedback I've recieved on my rulesets has lead me to embark on another project, this time for the English Civil War and provisionally entitled A Crowning Mercy. I've been toying with ideas for about a year on and off, so I finally took the plunge and got my ideas down on paper in outline during my recent holidays. Back home, I translated my scribblings into a prototype Play Sheet so Phil and I could give the rules a table top run through. We felt they worked really well in the main, but I've made a few refinements based on our thoughts and they'll have another run through next month. If any other groups of gamers would like to try a play test they can email me and I'll send them a copy. They'll have to earn their corn, of course, by making suggestions for developments {as well as promising faithfully not to 'borrow' my work!} More news, as they say, as and when there are any developments. Now, back to painting Indian Hill Tribesmen for the Mutiny!
Posted by David at 01:27