Carrying On Up The Jungle!

Phil and I met today for our weekly game here in GHQ. Sue and I had spent most of last week and the early part of this week dealing with builders, roofers, bankers, internet service providers and Severn Trent Water so the game I set out was a WWII Burma game, as the terrain is quite bespoke and simple to lay out. I'd determined that the Japanese, led by the gallant samurai Onamoro, would be attacking. To win the game one tank together with one infantry unit must exit the table on the Imperial side. Brigadier 'Mad Phil' Rawnsley would lead the imperial forces attempting to block the Japanese advance! As is my wont, a photomontage follows presenting a feel of the unfolding action for the interested reader ~

Type 94 tankettes lead the Japanese advance on their left. They are somewhat out gunned by the Grant seen in the distance blocking the village route. Unknown to them is the fact that it is broken down and cannot move! 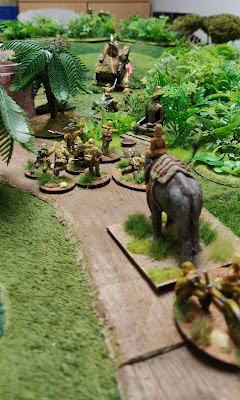 On the right the Type 95 Ha-Go advances with infantry support. The infantry gun drawn by an elephant makes stately progress in their rear. 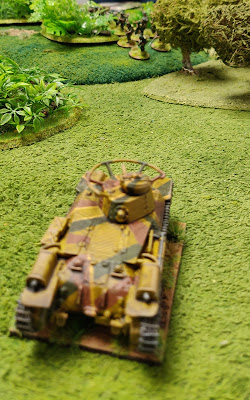 The type 97 Chi-Ha advances on a hill position held by the Gurkha battalion. It's machine gun fire proves utterly ineffective! Is this a portent of things to come wonders Onamoro? 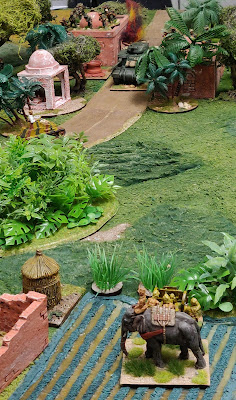 The second and final off table salvo from the 105mm guns knocks out the Grant. Heartened by this the Type 94s return to the advance on the village in support of their infantry. 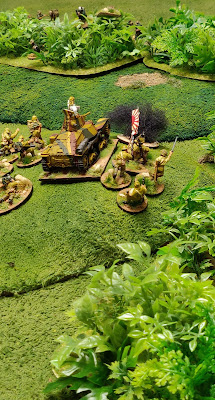 A mortar salvo strikes the hillside, damaging the Type 95 Ha-Go, but the infantry advance presses onward! On the ridge line in the cover of the dense jungle more Gurkhas await. Will they have any nasty surprises to spring? 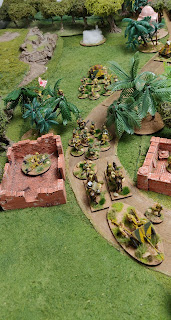 Back on the Japanese left the Type 94s advance with their infantry support hoping to flank the village and break for victory. The mortar has put down smoke to screen the advance from the Imperial HMG concealed in the line of trees.

Away on the Japanese right flank the Type 95 Ha-Go leads it's supporting infantry into an assault on the Gurkhas defending the ridge line. The PIAT operator takes aim at point blank range. Surely he cannot miss? 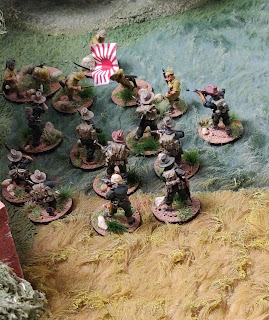 The surviving Type 94 breaks for victory with its supporting infantry someway behind. They find themselves assaulted by the Imperial infantry occupying the village. Combat is fierce and no quarter is asked or given! 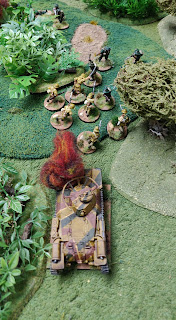 Another Japanese tank, the Type 97 Chi-Ha, is destroyed! Despite their loss the infantry surge forward on the Gurkhas with cries of "Banzai!" The defending Gurkhas fight bravely in vicious hand-to-hand fighting, their Kukris flashing in the sunlight, but they are driven back with losses by the fanatical Japanese attack!

Only a sole Type 94 has reached its objective, but without infantry support cannot claim a victory! All along the front the Japanese attack has taken heavy casualties and failed to make progress against stubborn defence. At this point, with casualties exceeding 50%, Japanese morale suddenly collapses and hands victory to the Imperial forces!
We used Rapid Fire Reloaded as the basis of our rules for this game with some areas not covered imported from Rapid Fire!2 where we felt it enhanced the feel of the game. The figures and tanks are mostly from Warlord Games, the Grant being a notable exception from Colonel Bill and unattributed. Terrain is by The Last Valley enhanced by jungle pieces I created from plastic aquarium plants. The buildings were from Mutineer Miniatures originally. I'm not sure who sells them now though. Despite the circumstances, and the result, this was a very enjoyable game. This collection doesn't get out on the tabletop battlefield as much as it might, so it's good to see it enjoy it's moment in the sun.