For our first set to of 2022, surprisingly not banned by Boristhebarsteward in both our minds, I let Phil choose the period. With his well known tact he chose an ACW game! Thus, the second game in our loosely defined 'Robinson in the Valley' campaign. Having been beaten in the first encounter, old Useless S Bykleigh and his battered command have retreated up the Valley and are encamped at Watford's Gap. As yet no reinforcements have arrived, despite Washington's promises, and with scouts reporting much Confederate activity in the vicinity the troops have been roused and are standing to, ready to face the enemy once more ~

Though some are a little tardy it seems ~ 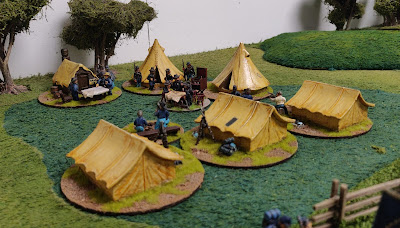 Sure enough Rebs are spotted marching up the Valley and closing in on Watford's Gap. As the Rebs struggle to shake out into their lines, the Union artillery opens fire on them ~

The lightly defended Union left flank is the first to come under pressure, though in what would prove a precedent for General Robinson's efforts, the attack was uncoordinated and regiments went into action piecemeal. (Dice! Dontyajustluvem?) Seeing the danger ol' Useless speedily responded by sending the New Jersey boys forward to pour lead into the Rebs' flank. With this support the US Sharpshooters and the New York artillery held the ridge above the Union camp ~

In similarly uncoordinated action on the Union right a lone Louisiana regiment, the famed Tigers, surge forward into the attack seeking to drive off the weakened 55th NY. Smashed by close range artillery and rifle fire they fail in their attempt and with many casualties retire Whipped! ~

More Union infantry are rushed forward on their left flank as the Rebs' attack their seems to be getting organised. With no sign of Robinson's attack reaching the Union centre soon the fighting on the flanks could yet win the battle for either side ~

Meantime, back on the Union's right flank, a second Louisiana regiment, the 3rd, has halted at the fence line, it's morale Shaken by fire from the Union's rifled guns ~

The leading Reb regiment in the centre is halted by Union resolve and heavy fire, while the supporting regiments of the Brigade are sluggish in shaking out into line to support the attack ~

Nowhere along the whole line have the Rebs been able to pierce the Union position. Command and Control issues have hampered Robinson's attacks, sending unsupported regiments to their fate time and again! (dice!!!!) Numerous regiments find their Morale broken, leaving them Shaken and Whipped, halting any prospect of a Reb victory ~

Despite everything though it might have been much closer but for the eventual arrival of the long promised reinforcements from Washington! A brigade of Regular Infantry marching to the sound of the guns arrived just in the nick of time to sweep over the lightly defended ridge on the Union left and halt any Rebel successes in its tracks ~

Defeated unexpectedly Robinson's command must retreat back down the Valley. Lacking any cavalry in the immediate vicinity and weakened by two engagements the Union led by ol' Useless are in no shape to persue, much to Lincoln's displeasure. No promotion for ol' Useless looks likely now. Perhaps if he can squeeze out a second victory? We shall have to wait and see...