PJ Rawnsley in the Valley

The second face-to-face game here in GHQ since the partial lifting of coronavirus restrictions by BoristheBastard sees a return to ACW wargaming using Black Powder 2 with home tweaks from the Glory Hallelujah supplement. The game imagines a Union force, under that scion of a long line of incompetents stretching back to the Revolutionary War, old US Bykleigh, sent to confront a Confederate incursion into the Valley, lead by that veteran of many a hard combat, ol' PJ Rawnsley hisself. The figures are from my own collection, which in the main are Dixon Miniatures of course. All the buildings are scratch builds from the last 25 years give or take; the roads are from the old Scenic Effects - if anyone has some they don't want I'd be up for them; the railway, fences and woodlands are from The Last Valley. Phil made the terrain boards and the hills for me of course ~

The first two turns were a disaster for PJ Rawnsley's Command, failing most of the Command rolls the Rebs we're finding moving forward very hard. This allowed the Union forces of 'Ol Usless to move southwards down the turnpike unopposed.

By the end of Turn 2 the Union were largely on their way to achieving the defensive position 'Ol Useless was aiming for. 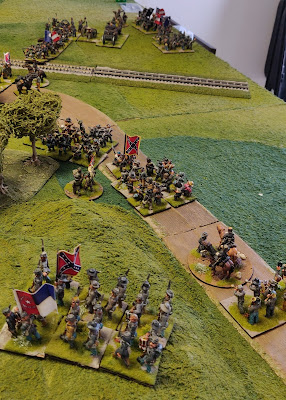 Even by Turn 3 the Rebs we're strung out along the Turnpike struggling to make up lost time. Brecher's decision to send the 2nd SC around the union right might have been a masterstroke, if not for the intervention of fickle fate...

By Turn 5 Moore's Brigade had taken up a string position on the Union's right flank, with the Garibaldi Guards keeping a watching brief on the movement intentions of the 2nd NC. Meanwhile Paddock's Brigade had secured the Union left, supported by Battery L and the 5th NY Cavalry 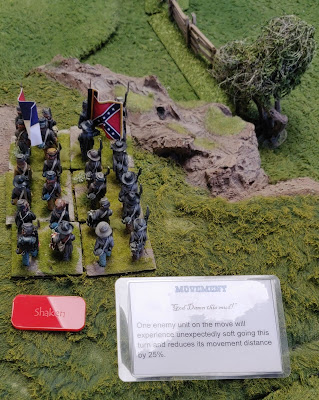 The 2nd NC's flanking move was bogged down first by losses to small arms fire and secondly by a succession of Fate Cards I was able to play on them. Allied to very poor dice rolls they floundered for the whole game.

On the Rebs' right the 16th SC suffered grievously from the fire of the 5th NY and Battery L; Whipped they sought safety in retiring from the fight!

Moore's Brigade were by now involved in a prolonged firefight across the open ground separating the two sides. Getting the better of the exchanges turn by turn was shifting the battle in 'Ol Useless's favour. 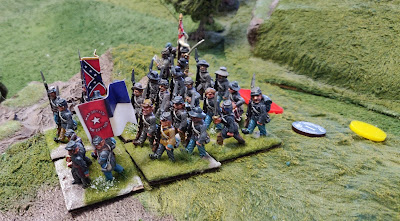 The 2nd NC found it impossible to progress under successive moves of small arms fire from the Union right and the cumulative effect of a succession of Fate Cards. 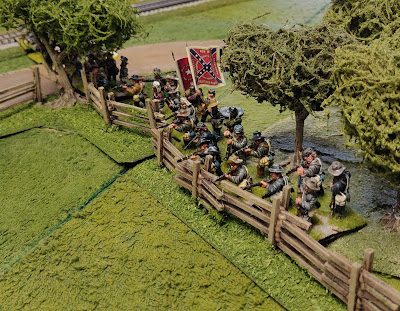 The 36th NC having struggled into position slowly entered the firefight on the Rebs' right but to very little effect - problems in the Richmond powder mills I fear! 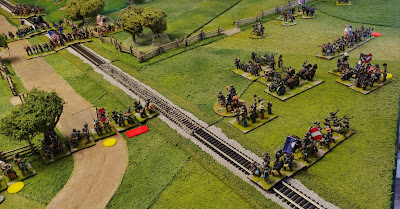 The exchanges of fire on the Rebs' right finally saw the 24th SC become Whipped and with them the whole of Desch's Brigade retired from the fight in Turn 11!

Despite the Fate Cards limiting their ammunition supply the 39th and 14th stood their ground manfully exchanging lead to good effect with the Rebs opposite.

PJ Rawnsley orders a general withdrawal at the beginning of Turn 12, leaving 'Ol Usless in possession of the field! A Union Victory!  Cue manly cheering, "Huzzah! Huzzah!"
As a trial exercise for the onset of the campaign in The Valley the game was a valuable exercise. The size of forces proved about right for the starting positions, allowing for manageable growth in respective strengths dependant on outcome in successive games, hopefully reaching a climax in a large battle at the Campaign's conclusion. The Fate Cards proved rather more intrusive than I planned, so their role will be reigned in once we start, with new cards collected only when a card has been played and not every Turn. {For those interested by the way, the Fate Cards are from my own Bull Run to Gettysburg rules published by Foundry.} I have one more unit I want to paint before we embark on the Campaign, so starting in late summer seems about the right target given my current painting plan. More as and when, as they say.