Following on from my earlier post on Scale,Size and Painting Standards I thought I'd offer a few positive reflections on bringing our wargames figures, units and armies to the tabletop battlefield. First though a disclaimer, I am not a good painter - just wander the web and you'll see what I mean I'm confident. My painting, as Phil would say, will do. In close up you can easily see my faults but then you don't see them on the tabletop battlefield at playing distance I'm equally confident. That is where they are meant to be seen after all; I'm a wargamer who paints rather than a painter who might sometimes wargame.

Having established my starting point I want also to say that I'm generally satisfied with the end product of my efforts as they appear on the battlefield. I believe that is down to a number of important efforts on my part to do justice to the sculptor's work. Firstly if I may I'll refer to faces. Back in the early 1970's when I ventured into our hobby, via Alumwell Wargames Society, faces were pink usually using the Humbrol Flesh Matt tin. Even when progressing to early Plaka acrylic paint faces remained resolutely pink! Somewhere in the early 1980's it suddenly became fashionable to shade and/or highlight the flesh tones, probably as Colour Party Paints replaced Plaka on my desk. Then, in the 1990's starting with my Dixon Miniatures ACW armies I was painting in the eyes, because Trevor had gone to the trouble of sculpting in details. Since then my flesh painting has gone in several directions: the Foundry Triad system; Games Workshop washes and highlights to now either a base, a wash, and a base highlight or just a base and a highlight. Eyes, well only on Dixon Miniatures, and with increasing difficulty. Moral of the tale, a little effort lifts the figures into small persons in a unit but not portraits hanging on a wall. I apply this method to European and Asian figures alike and to all exposed flesh. It looks fine to me and has attracted some positive feedback so might help someone else find their own method. 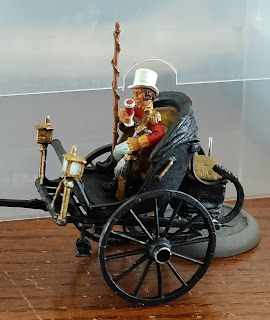 Flags next: who can resist a decent flag or three after all? Back in the day I hand painted mine, though often using the black and white outline designs Hinchliffe provided with their Napoleonic standard or guidon bearers. Branching out into Malburians and ECW meant hand painting on the grand scale. Thankfully as my interests developed widely along came preprinted flag sheets, initially grouped idiosyncratically on sheets of half a dozen or so flags. They did save a lot of trouble, but have been long superceded by the intricate work of GMB Designs or Flags of War for example. I tend to copy my originals on my Lazer printer/copier onto thinner paper making it easier to fold into the staff and to animate. I like lots of flags if possible, I had great fun with my Italian Wars Papal Army of Alexander VI, Borgia that way. I also like large flags, often enlarging the originals by 10% or so. Not to everyone's taste but there you go. A little cash and time invested in flags is never wasted in raising the look of an army or unit. 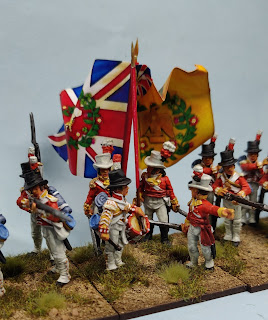 Bases, the bane of many a wargamer's hobby efforts. I'll start by saying many armies you see at shows or on the internet are really based on far too dark colours. You need lighter base colours - earth's, grasses, vegetation and such - to lift the effect of the painted figures. It's a matter of the scale of colour I was once told by a professional artist and wargamer; the smaller the figure the lighter the colours need to be to convey the same effect. In my armies the one exception is for the games set on the Indian subcontinent where I mixed a darker shade of static grass by adding some brown to the Spring Green I usually use. But I kept the earth shades light as usual as well as painting the figures brightly and the overall effect remains uplifting of my modest efforts. I ought to mention Tufts as well here. While I do have the odd flowery tuft on bases in some armies I've inclined over the recent years to the less is more principle. After all not every battle was fought across cottage gardens or tulip fields! Again though, it's what works for me... 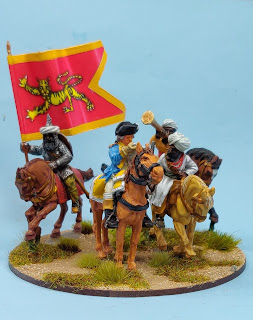 So, a combination of some effort with general flesh areas, but especially faces, combined with time and money invested in flags and an effort with your bases has the combined capacity to lift even modestly painted armies to a good visual level. For the Ancient, Medieval and Early Renaissance gamer this extends to Shields as well. My efforts back in the 1980's would frankly embarrass me today given the myriad wonderful shield transfers available at modest cost! My Punic Wars Republican and Carthaginian armies are lifted from my average painting efforts by the excellent LBM transfers, though I cursed them roundly when cutting out dozens!!! Again a little time and money invested is more than repayed in the end product! 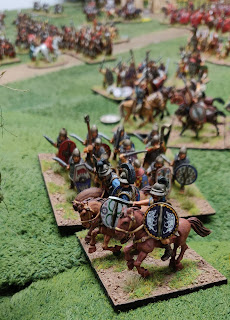 Well, there it is for what it's worth. Not much perhaps to show for nigh on 50 years of painting wargames figures but if it helps even one visitor resolve an issue for themselves then I've not wasted all those years... In the meantime I couldn't resist ending with this topical sign encountered last month near the Welsh border ~ 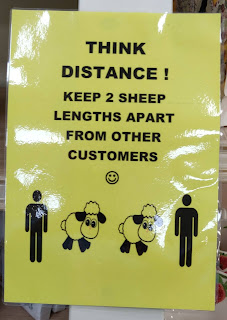