While I was plodding endlessly onward painting the tiresome Pendawar Grenadiers I was also splashing paint on figures for the cavalry elements of the Army of the Pendawar Presidency in the form of Trent Miniatures British Light Dragoons in tropical service helmet, or rather a passable interpretation of it. 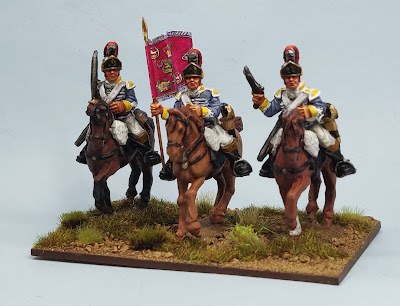 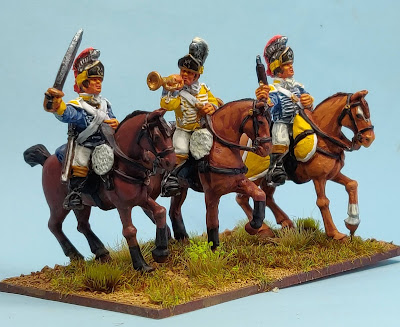 The figures are chunkier than either Perry Miniatures or Foundry figures, but they fit in pretty well once painted. Some folk tend to agonise rather pointlessly in my view about mixing different manufacturers' figures in their armies. Experience has shown me that differences in size/scale do tend to go unnoticed once the game is afoot, at least where different units are concerned. There are two bases of three figures, giving six in the unit. The guidon is a fudge, before any button counters pipe up, it will do for me for now at any rate. The 20th Light Dragoons complement the 'Pendawar Peacocks' seen in an earlier blog post. To these two European units will be added two six figure units of Sepoy cavalry. These are from AW Miniatures, whose large Indian cannons feature in Typoo Bhyka's army. Again they are chunky sculpts and in a different style, but again also I'm confident you won't notice in the heat of battle. The first six figures have been started so I'm hopeful the unit will be completed by the end of the month, given that I'm away for a few days now.