...big ones too! I set about adding some artillery to the army of Typoo Bhyka. I really liked the Indus Miniatures lion mouthed guns, bit couldn't find a source sadly. Instead I ordered four large guns from AW Miniatures. Their service was so brisk they'd almost arrived before I'd bought them! I'd already acquired the Native Gun Crews from Foundry so we were good to go. 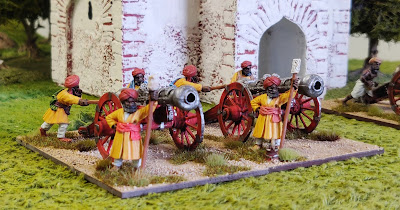 I've based the artillery with three crew figures on 80x100mm bases from Warbases. The six figures in each crew pack have three fully clothed and three stripped for action. That enabled me to differentiate the two batteries, each of two guns, by using the stripped for action chaps to crew two guns and the well turned out chaps the other two. All the gun carriages I  painted Foundry Madder Red shade and washed with GW Agrax Earth shade wash. All the iron work I painted with Foundry Blackened Barrel light and highlighted lightly with the same company's Spearpoint. Two guns are with iron barrels of the same shades and two are Bronze Barrel, also from Foundry, the shade paint lightly drybushed  with the mid tone. The basing material is the mix left over from my Mutiny project, which will let the pieces have more use, and vegetated in the manner I used on the completed brigade I featured earlier.