As time like an ever rolling stream flows ever onwards it’s an opportunity as the year's close approaches to look back on past hobby activity and look forward to what hopefully 2019 may bring. As ever I’ve kept an old fashioned desk diary in which I record my hobby related activities under the general headings of ‘Games’, ‘Painting’, ‘Purchases’, and ‘Visits’. Although I sometimes feel this might be a tad OCD I genuinely find it helpful in seeing the balance over time of where my hobby interests are taking me. Straight away I can see that compared to previous years I have made fewer hobby related visits, to Shows or to Stores, than in any of the most recent years. Mainly this was due of course to my hip replacement operation in early May and the enforced travel ban during the immediate recovery period of several weeks. In fact since The Other Partizan in late August it will probably be WMMS in early March before I attend a wargames show again, that's assuming we don't count the Penkridge Table Top Sale in January. While age and disposition might partly be the cause, I have to say I find wargames shows increasingly disappointing, though it’s hard to say why that is. I should probably return to this theme later and give it proper thought and consideration. We’ll have to see...
Back to the review of 2018 though for now. I see from the aforementioned diary that in the year I played 50 games, mostly against my friends and steadfast opponents Phil and Jon I should say, winning 22, drawing 14 and loosing14. Overall a pretty average performance, as ever of course. What was new though was a conscious decision on our part to consolidate the rules we played, rather than dip into numerous sets. This meant sadly leaving several sets I had written and published in favour of Black Powder as I found I simply could not cope with remembering what went where in each game. Age brings wisdom they say, but not improved memory I’ve found, so it’s simpler to use one core set for several genres we play. When we branch out into Ancients, ECW, Italian Wars and WWII I find I lean heavily on Phil especially as he’s far more into rules than I am now a days. Hardly fair to him perhaps but it seems to work for us. 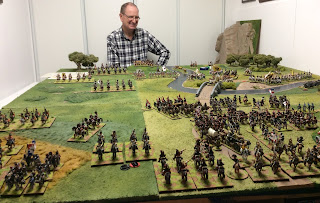 Painting continues to be a solitary pleasure, though developing arthritis in my right hand allied to early stage cataracts in both eyes has sometimes made for difficulties. I see from the record I added 536 figures to the stock of resources in GHQ, though the Lead Pimple remained resolutely of the same sort of size. Must be some sort of magic thingy at work there! I only paint 28mm figures now of course, still in a range of periods and genres, but mostly in the late C18th to the early C20th. I’ve never thought of myself as more than an average standard of painter but I’m still generally really chuffed by the look of my armies on the tabletop, if not so much close up! I put this down to some advice I was given years ago now: ‘Faces, Flags, and Bases’! Well, Flags I can buy for almost any period now; faces I'm less good at now, having largely given up on eyes for example; bases I do work a little harder at now, though the benefits of laser cut MDF can’t be underestimated in the overall finished look of a unit or individual base. As the Lead Pimple has recently expanded significantly I hope 2019 will prove to be equally productive and satisfying as 2018 was! 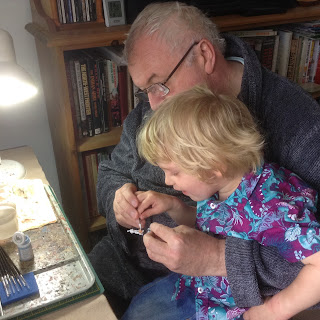 I’ve already alluded to a significantly reduced frequency of visits to wargames shows and hobby stores and explained partly the reasons behind that. I’d like you to humour me a little though as I share my thoughts on this important aspect of our hobby for a while. I always used to look forward to the opening of the Show Circuit each Spring, usually back then at WMMS, and would often chalk up 20 plus Shows in the year, several in company with Phil and our Demo Game for that year. I really enjoyed showing our games to fellow enthusiasts, even those of the Trappist persuasion, but advancing years and the onset of hearing issues lead to that aspect fading away. Now in the role of just another punter I have to admit I find many shows a bit samey. I find them a bit like Medieval markets really, moving on from place to place over the year, but still featuring the same faces in the Trade and Gaming aspects. I realise that’s not the fault of either organisers or featured gamers, rather
perhaps it’s me in a new phase of my hobby life. This is one reason I enjoy the Scottish shows of Carronade and Claymore, featuring some traders and gamers who don't venture down south as well as the chance to meet my many Scots friends. I no longer buy much at shows, thanks to the net of course, and while I can admire a grand game I can often see it later and better on Blogs and Forum Boards. I still enjoy chatting with old chums of course, but the buzz of shows has largely evaporated for me. 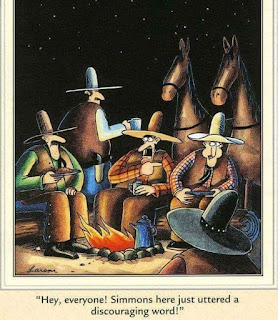 Finally in the review of the year I ought to mention purchases. Well, far too many if I’m honest would be my initial thought. But then what fellow hobbyist wouldn’t say the same I wonder? Certainly if you look at Bring & Buys, eBay and the like a lot must be bought and never painted or used! On the other hand I did part with three collections this year: my 20mm Vietnam War game; my Samurai skirmish game; and lastly, my C19th Great Detective game all exited GHQ for good. In truth the first two were played out without unlikely investment in new components while the latter simply never worked for us as a game for two players. I’ve found that my penchant for Pulp type games more than sated by the VBCW genre, so next year should see my Pulp Adventures collection also departing GHQ, with the resulting cash being reinvested in more popular and enduring games here in GHQ. 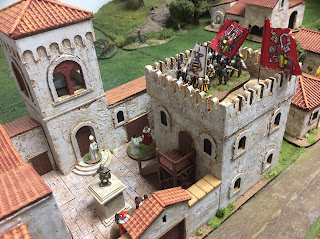 Where do I hope to be going then in 2019 in our wonderful hobby? Well, judging from a recent inventory of the aforementioned Lead Pimple the answer is the Black Powder era with additions to the AWI, the ACW and the SYW. 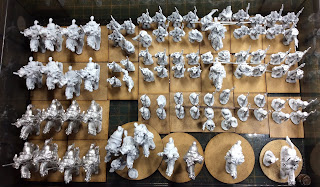 That ought to keep me occupied for a fair chunk of next year {DV}... 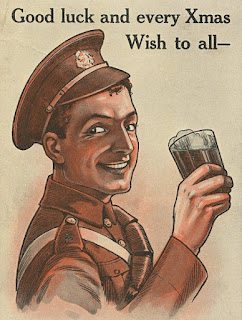 A VERY HAPPY CHRISTMAS
and
A PEACEFUL AND PROSPEROUS
NEW YEAR 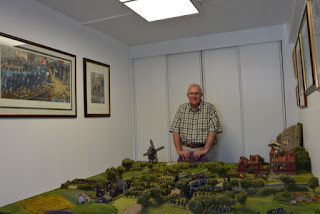 The usual 'End of Year' musings will probably appear nearer to the end of the year, for those of course who are interested in my ramblings...

My real passion, if I can say I have one as a wargamer, has been the American Civil War almost since I first got into this hobby. In my time I have owned three collections of both factions in the conflict: a 15mm Minifigs collection; a 25mm Minifig collection; and, lastly, a 28mm Dixon Miniatures collection. Even with my larger table in GHQ Mk2, I have more figures than can be accommodated in any game, so why I have bought more figures is a source of some concern, but buy three more regiments worth of Infantry I did last year! Madness, I know... Of course they are all Dixon Miniatures, quite simply in my view the most characterful and comprehensive range on the market, I just enjoy painting them! Well, one of those three new purchases has had its moment in the sun and reached the painting desk! A Union Regiment, the 20th Massachusetts Volunteer Infantry, Flags From Redoubt Enterprises ~ 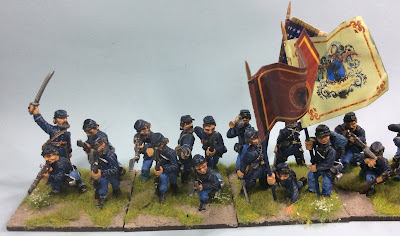 The 20th Massachusetts Volunteer Infantry, known as the "Harvard Regiment", served in the Union army in the ACW. The regiment gained its nickname because the officers of the 20th were young Harvard graduates. In addition some of the private soldiers had attended Harvard. Perhaps it’s most well know member as far as wargamers are concerned was Oliver Wendell Holmes, later a Supreme Court Justice. The 20th was organized in August 29 to September 4, 1861. After training they left for Washington DC on September 4. They would fight until the war's conclusion; being mustered out on July 16 and discharged July 28, 1865. With the exception of First Bull Run the 20th participated in all of the major battles and many of the smaller battles fought by the Army of the Potomac from Balls Bluff on October 21, 1861 through the Seven Day’s, Antietam, Fredericksburg, Chancellorsville, Gettysburg, the Wilderness, Spotsylvania Court House, Petersburg and finally theAppomatox Campaign.
Painting is restricted just now by caring for Sue and necessary domestic duties, compounded by the pre-Christmas crush. I'm pleased to say Sue is progressing well! In the circumstances I'm pleased to have completed these. I've also just started some Foundry SYW British infantry to represent the 23rd Foot.
Posted by David at 06:07 22 comments:

Things have been a tad hectic here in GHQ this last week or so. Sue was rushed to hospital two weeks ago with acute appendicitis, operated on, cared for in New Cross and finally discharged to my care last Wednesday. Needless to say painting and gaming with little metal chaps was not a high priority. But, Sue is making good progress post surgery and so I felt able to host Phil this Monday for our regular game. My choice was a SYW game, which I would have played with Jon but for the aforementioned medical incident! As ever, a photomontage to try to convey a sense of the unfolding action ~

As I’ve previously stated, I was mulling over a new project for 2019, the WSS was in pole position in my thinking. In the end I settled for an expansion of my SYW collection as I couldn’t face two whole armies it seemed! I have reinvested the funds raised by selling on my Vietnam War 20mm game, so no overall hit to the warchest, as yet...
Posted by David at 06:01 16 comments:

The 3rd Light Dragoons to be precise. Added to my AWI expansion project over the last week or so of disrupted hobby activity. These are the Perry sculpted Foundry figures, a part of my lost and replaced mail order from late October time. I really like the figures I have to say, they are nicely animated and paint up really easily. Oh, and they were not covered in endless fine vent runs! Unlike some I have bought of late from their own company. You may guess by now this is one of my pet hobby hates. Here they are, ready to join the fray ~ 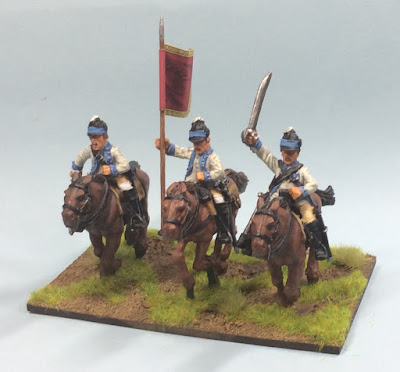 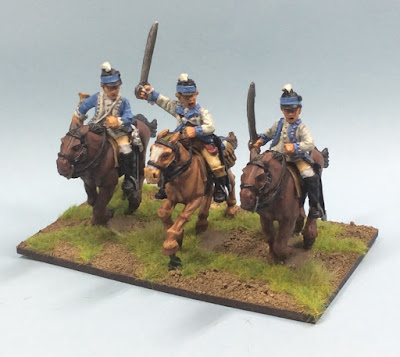 I recently took advantage of Foundry’s 'Buy 16 Get 6 Free' Christmas Sale to buy, amongst more SYW figures, two more British infantry units. They will go into the Lead Pimple for next year sometime. Meanwhile, back to the ACW with a unit of Dixon Miniatures Union Infantry, the 20th Massachusetts with Flags by Redoubt Enterprises...
Posted by David at 12:54 18 comments: