At The Ruins of Neptune's Temple

As the summer moves into the frame I seem, as ever, to paint less and play fewer games. I suppose the better weather and the longer hours of daylight mean more can, and has to be, done in the 'great outdoors'. Whatever, despite the attractions of the sunny day forecast Phil and I met in GHQ for our first game of the summer. We had decided on another game in our ongoing series pitting the usurper Baldinus against the rightful Emperor, Pompus Maximus, set in the Late Roman period. Our rules of choice now are Neil Thomas's Ancient & Medieval Rules, with numerous in house amendments of course! As our game falls on the anniversary of D Day in 1944 we chose a suitable setting for our game: Baldinus has landed with a force of infantry near the ruins of Neptune's Temple. He hopes to hold off forces loyal to the Emperor long enough for his Huns and Light Cavalry archers to arrive from along the coast. He must dice every turn, from Turn 1 to 6, needing a '6' in Turn 1, a '5' in Turn 2 and so on for them to appear. Pompus begins with some Dark Age infantry with javelins, a group of Ballista, and some Heavy Archers guarding the coast. He too has other units off table, dicing in the same manner for their arrival. If all arrives before Turn 7 Baldinus will have 9 units and Pompus 6. 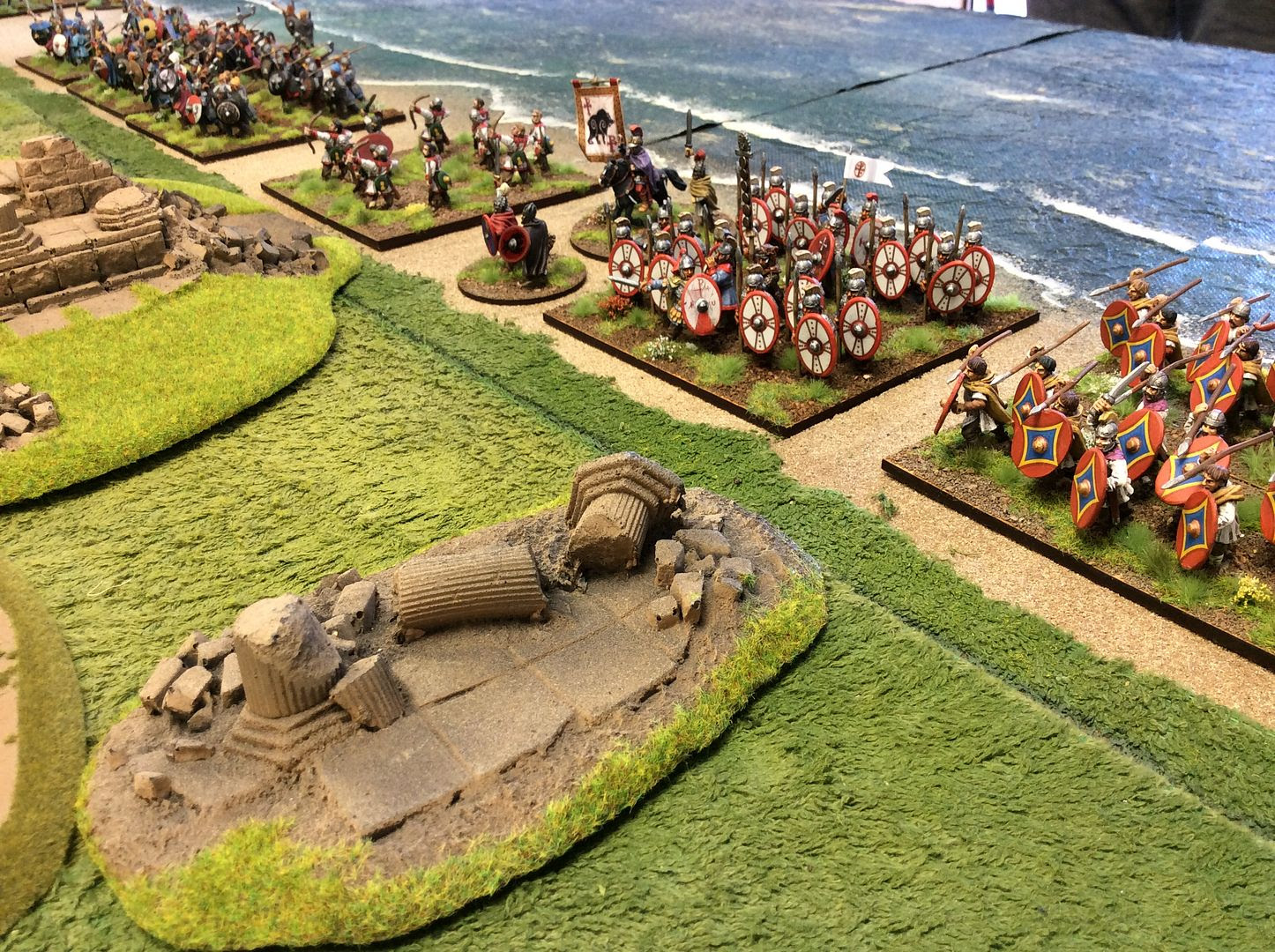 As it turned out, by Turn 3 no one had arrived to reinforce either Pompus' or Baldnus' forces and things were already developing as Baldinus attacked the enemy's position vigorously! Taking full advantage of his artillery Pompus' forces attempted to wear down the advancing warbands of fierce Saxons while the Heavy Archer unit inflicted some losses on their opposite number as they struggled though the ruins. 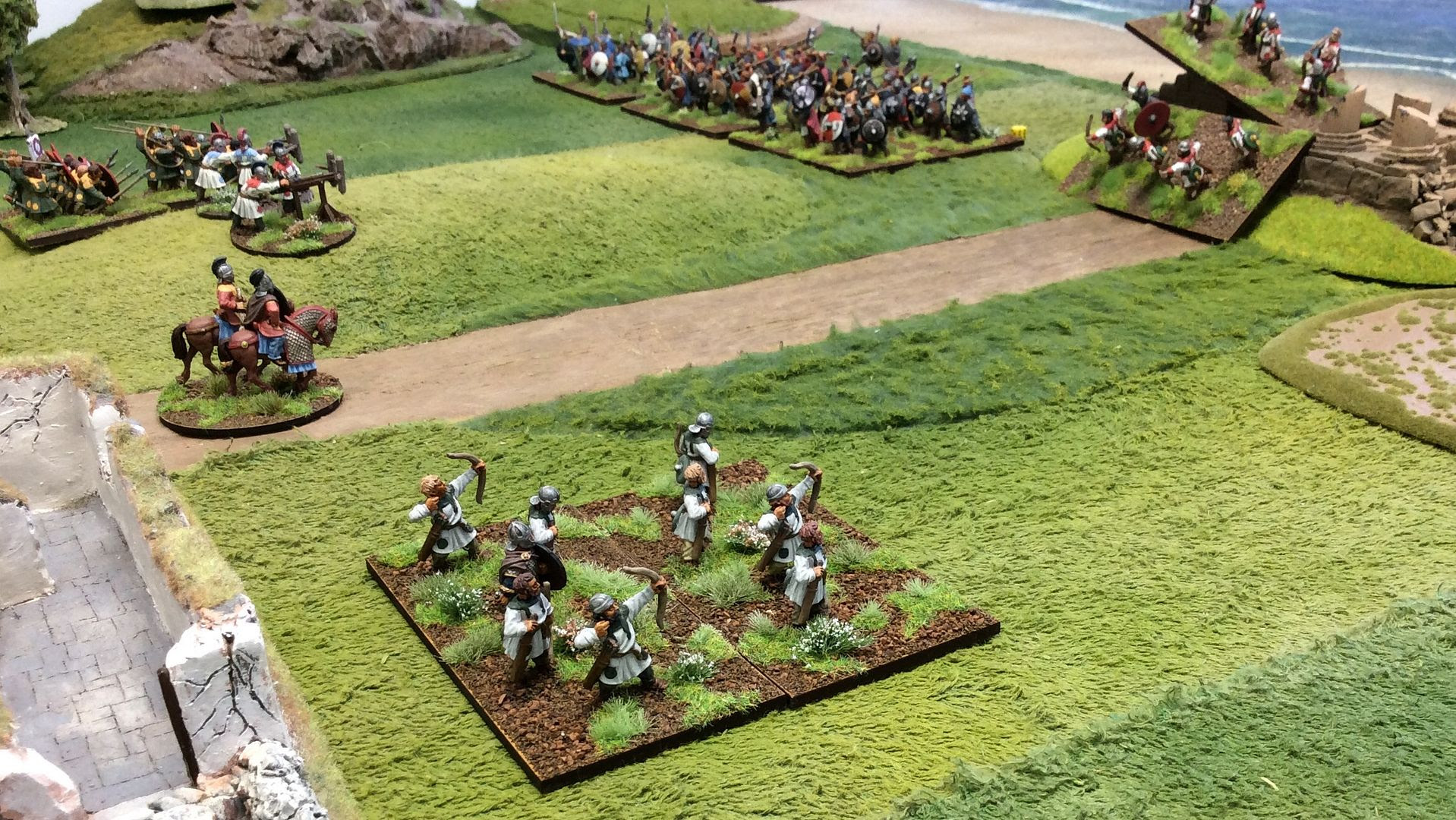 The Saxons hurled themselves on the defenders, easily destroying the Ballista crews, but found the Dark Age Infantry a tougher proposition. The local commander, Bicca Rotunda, threw himself into the fight and the Saxons were halted! 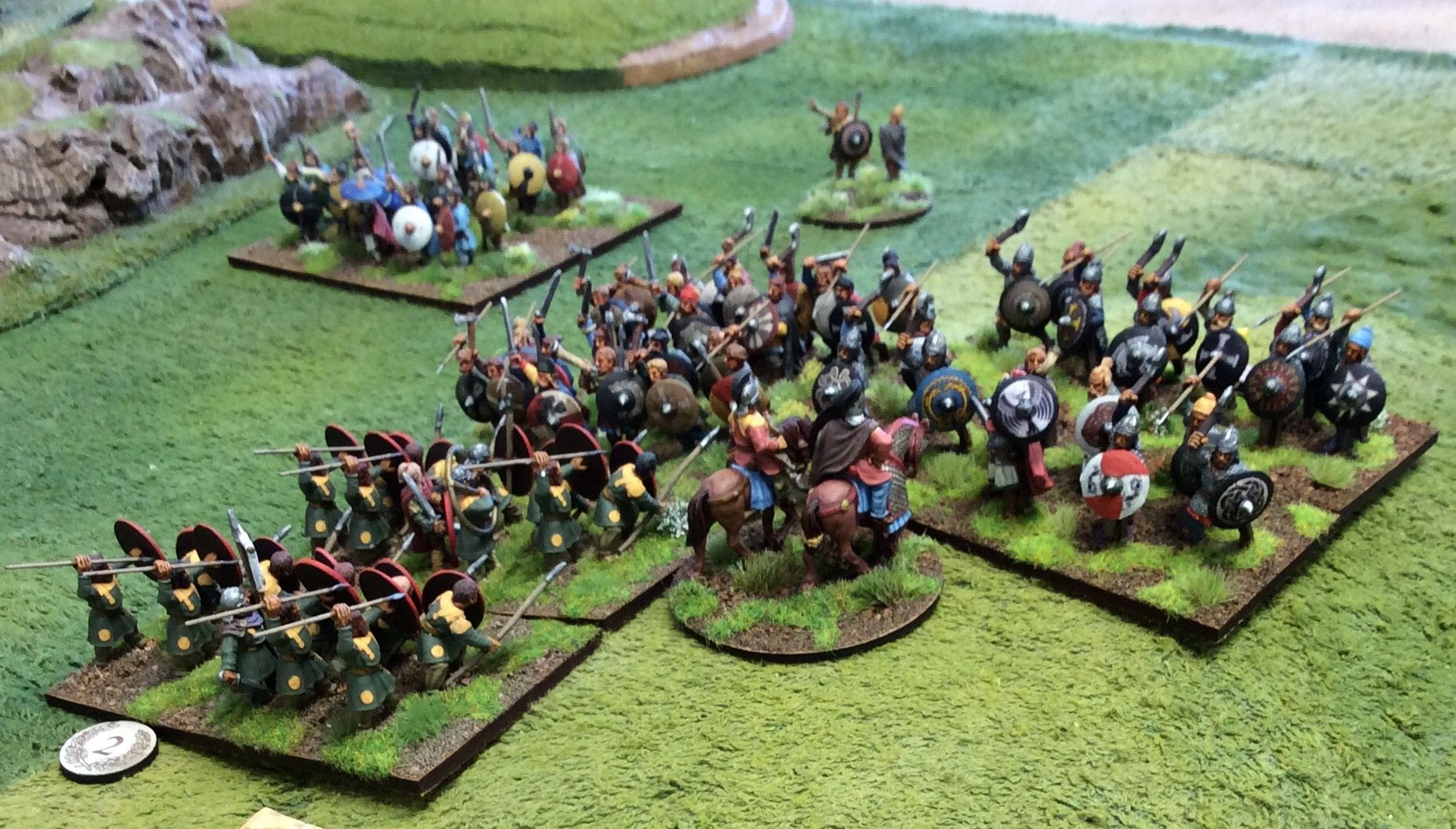 In truth, the heavy losses inflicted in two turns of fire from the Ballistas, supported by the archers, had seriously weakened the one warband while the other simply could not deal with the opposing infantry {Phil's dice were useless!} While Pompus' force held their ground against the Saxons there was still no sign of his reinforcements! But away on the right cavalry could be seen pouring forward in support of the stalled attack. 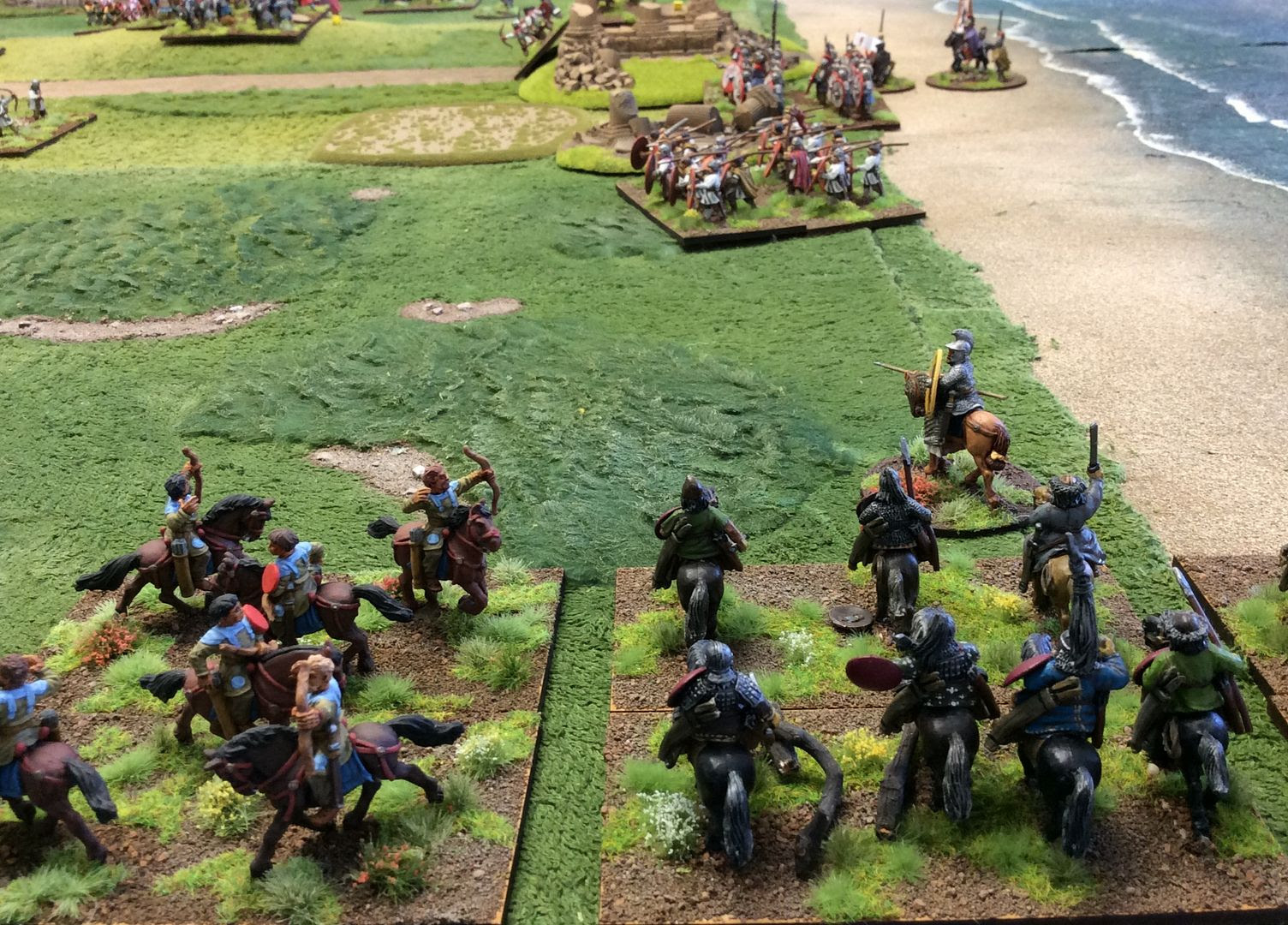 With his courage restored, Baldinus pushed his centre forward and deployed his cavalry to cover their flank from any surprise attack from Pompus' direction. This sudden development looked as if it might win the battle for Baldinus, so much highly mobile firepower can be devastating! Never daunted, in Turn 5 Baldinus' Legions arrived on the field lead by the Emperor himself! This gave fresh heart to the infantry holding off the Saxon warbands, aided as they were now in their struggle by the arrival of some Light Cavalry armed with javelins. 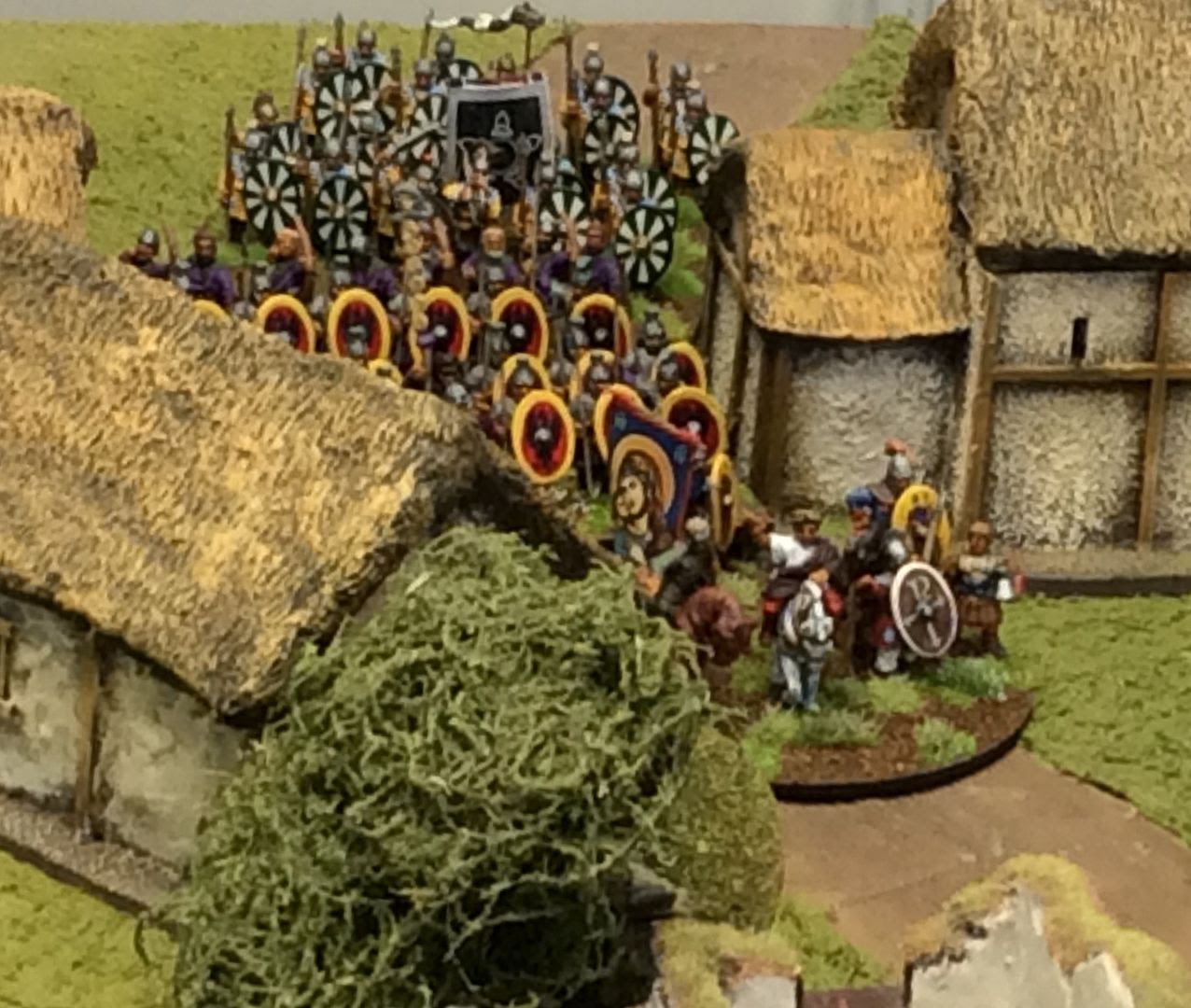 The titanic struggle on the left continues, with Bicca Rotunda distinguishing himself in the combat. The Saxons are hurled back by the infantry while the javelins shower down on the warband so far unengaged. Although things look far from encouraging elsewhere on this Field of Mars, on the left the Saxons are almost destroyed!

In the centre the legions advance slowly through the village, as yet unaware of the forces massing on their right. The remaining Heavy Archers are selling their lives dearly to buy time for the legions to close with the enemy. 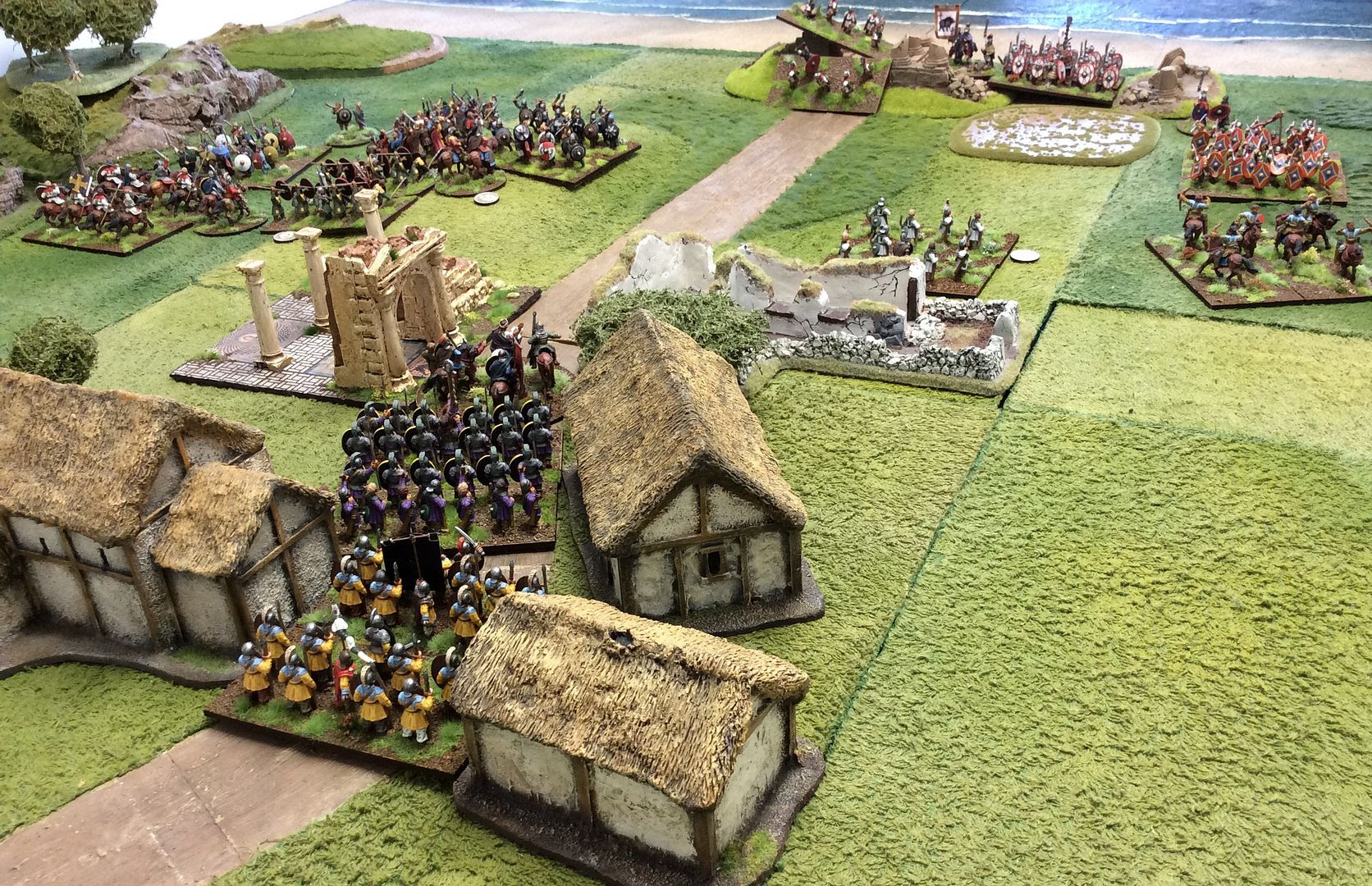 As it stands now, the pretender's cause looks doomed on his right, with the remaining Saxons being peppered with Javelin fire from both cavalry and infantry while Bicca holds off the remnants of the Saxon Nobles. { Note, we don't remove bases, just put markers down, so Bicca is only fighting the one remaining base!} 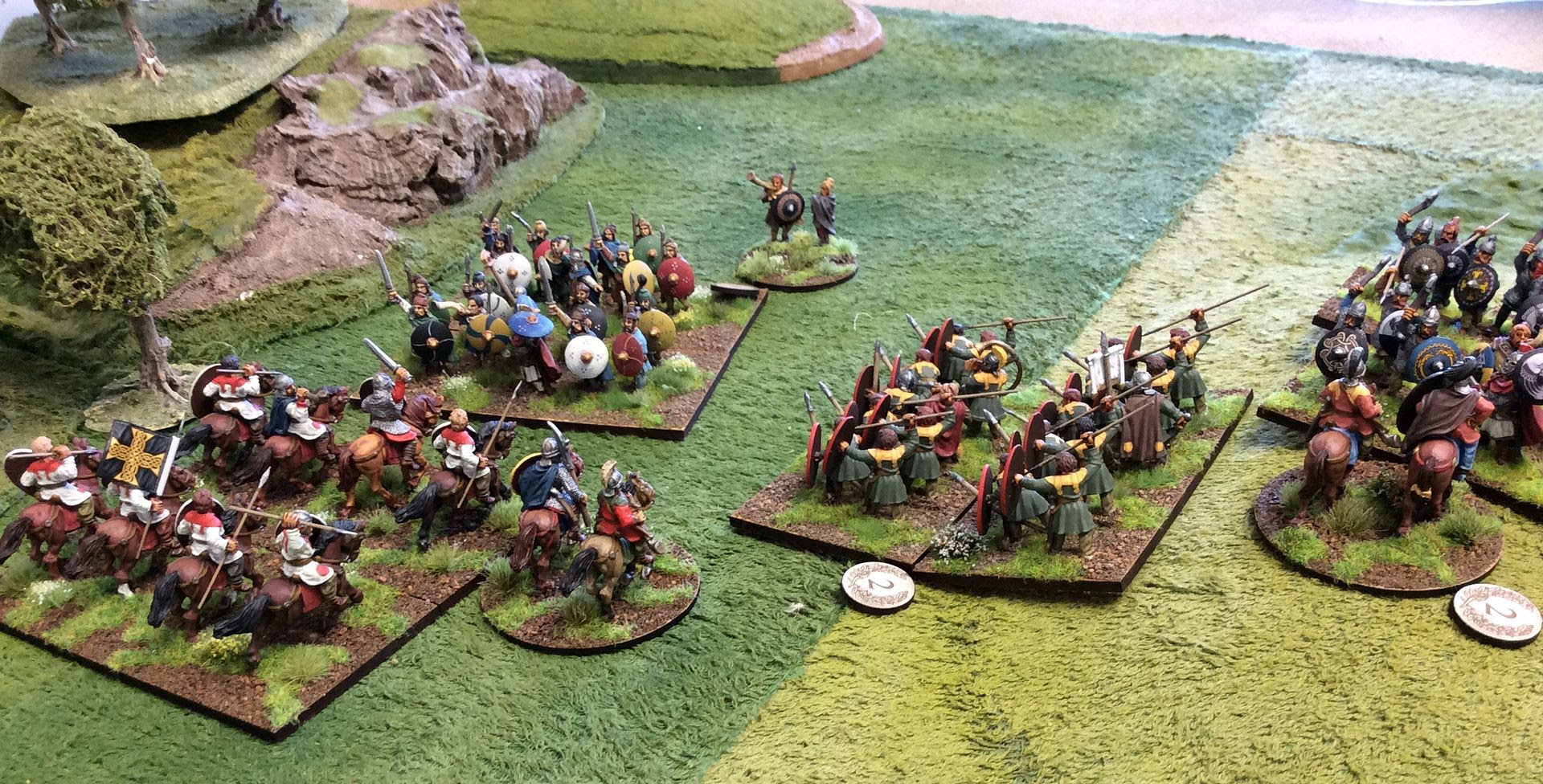 Baldinus' Hun light cavalry are sweeping around the rear of Pompus' position, as it turned out all too late to significantly affect the battle's outcome. 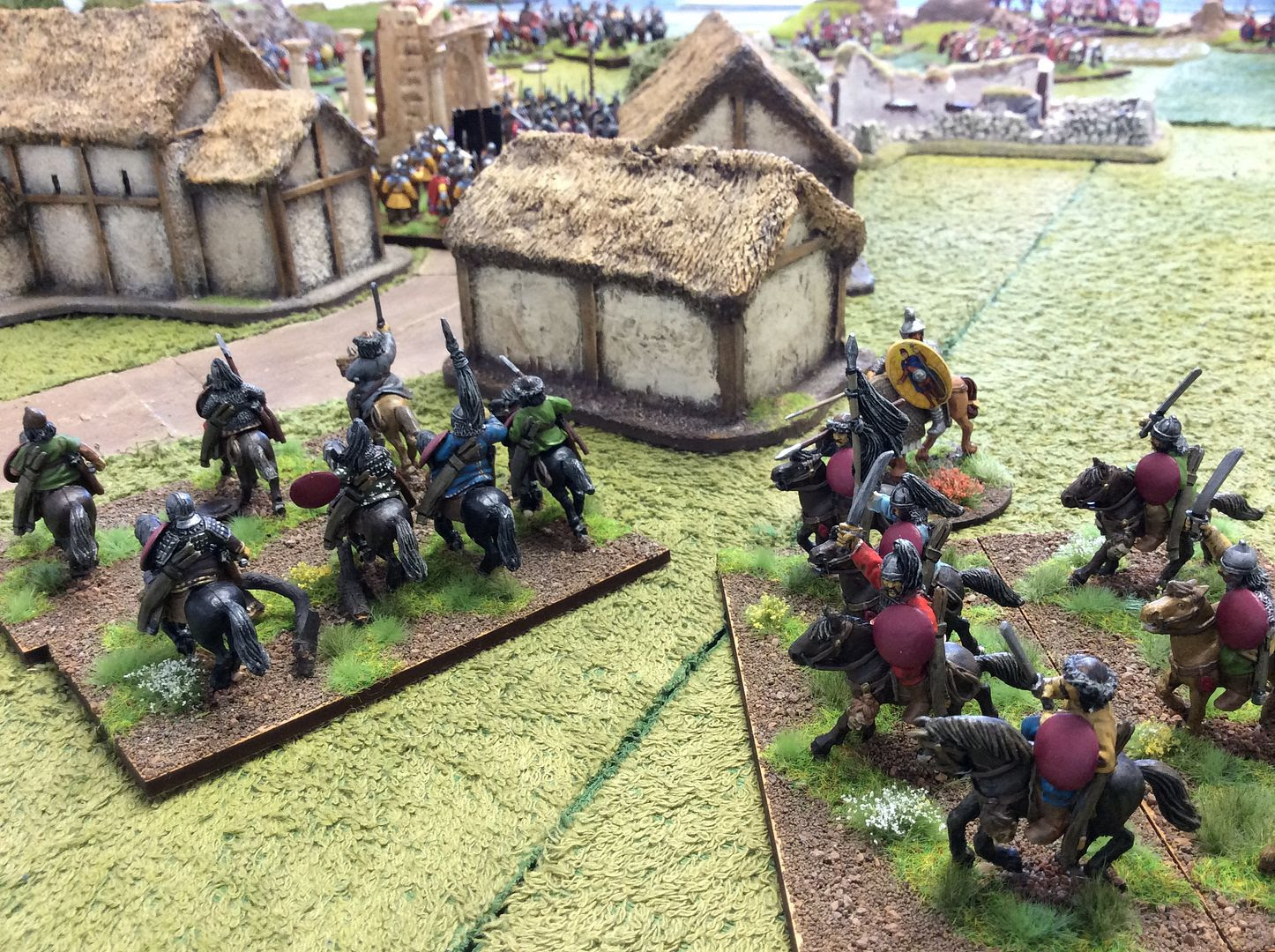 In Turn 12, the final turn of the game, Pompus has defeated the pretender on the left and neutralised the Hun threat to his rear. While Baldinus cannot win the battle, he has secured a foothold again from which he can challenge the authority of the true Emperor in a future test of arms. 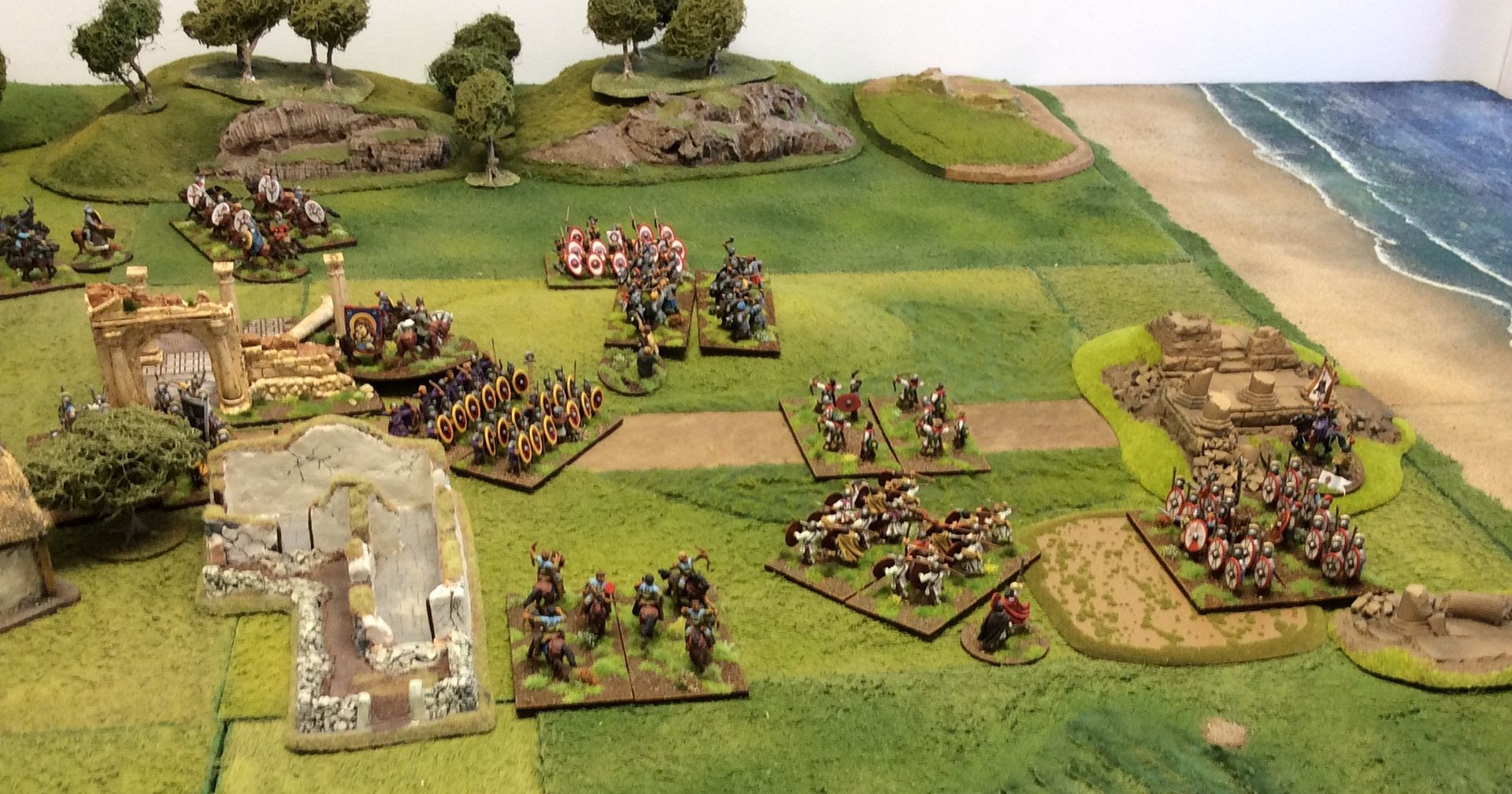 Result you ask? A draw, though close in the end. Baldinus had lost 3 units from 9, Pompus 3 from 6. Other of Baldinus' units were weakened by missile fire or too far from the action to affect the outcome when the game came to a close. Pompus and Baldinus will meet again on the Field of Mars!