More Militia for the AWI

Things have steadily returned to their regular rhythem, at least for now, here in GHQ. I've been progressing a second unit of South Carolina militia for our AWI games. Again the figures are by Perry Miniatures, with the flag from Clarence Harrison's former free downloads and bases from Warbases of course. The figures making up this, and the previous unit of militia, are from four codes: obviously the advancing Command Pack in shirtsleeves supported by figures from the pack marching in shirtsleeves; advancing in a less formal style; and men of color marching. What it really helps with in this combination is that no figure over two units is replicated, so I only had to worry about the colours to use for clothes and equipment and not how to arrange each base to keep similar coloured figures apart! Anyway, a few pictures to give a feel of the overall look ~ 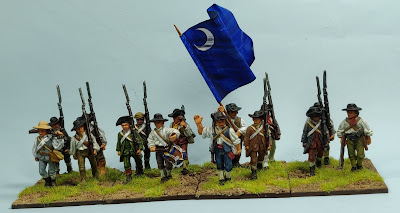 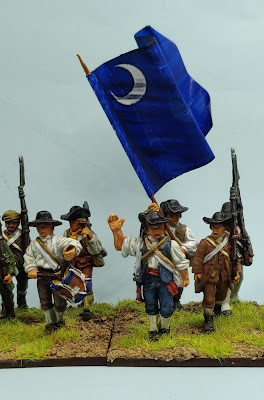 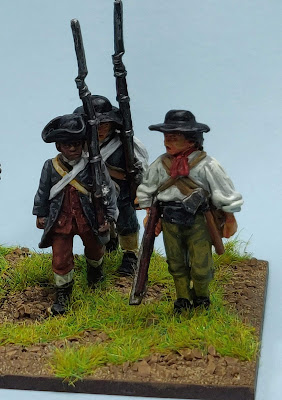 Next on the painting desk are a few Knuckleduster Miniatures for my War of 1812 expansion. They will serve as Kentucky Mounted Militia. I would have preferred the Foundry version, but the pack contents made it eye wateringly expensive. I picked these figures up on a visit to Caliver Books, well worth a visit if you are within striking distance in my opinion. I've ordered some more figures, Canadian Militia in round hats marching. At The Other Partizan last week I picked up some Perry Miniatures from their French in Egypt range, the British infantry in round hats together with a pack of mounted Colonels. These too will be repurposed as Canadian Militia. If I like the Knuckleduster Canadian Militia when they are painted up I'll probably order their Frontier Militia packs too to bolster the US forces in the game. We shall see.
Posted by David at 01:15