These are the very first Knuckleduster Miniatures I have owned or painted. Most of my War of 1812 collection is from Foundry, mainly the range sculpted by my chum Aly Morrison supplemented by some Perry sculpted Peninsular War era British infantry sporting the Stovepipe shako. I would have preferred to stay in house so as to speak but to acquire 6 of these by Foundry would have meant buying six packs of Militia at £72! Clearly the pack structure has more to do with moulds than with a knowledge of US troops and uniforms for the period!
I can't say I much liked the figures when I first cleaned them up, and undercoating did little to change my view. However, I started on them eventually and I have been pleasantly surprised at how they have turned out. The sculpting style is more Old Glory/Elite than Foundry, but I believe they will do. You can see for yourself anyway ~ 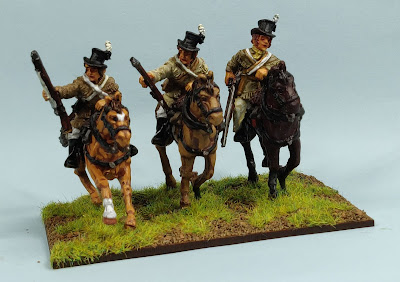 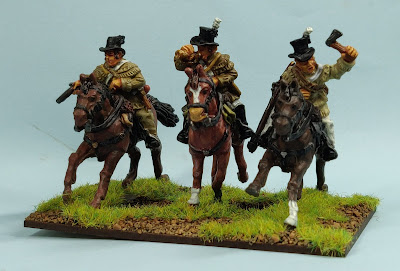 On the back of my experience with these examples I made a second order to Caliver for Canadian Militia in round hats. Sadly only one pack has arrived so far, the remaining packs having to be ordered in from the USA. If I'd have seen they were not in stock I might not have bothered!
Anyway, at The Other Partizan earlier in August I bought four packs of British infantry in round hats and overalls from Perry Miniatures' Egypt range. They will also do duty as Canadian Militia when their moment comes. If I like the Knuckleduster Canadians then I will risk a further Caliver order for a couple of units of their US militia in round hats, perhaps one in hunting coats and one with turn back coats. More as and when.
After finishing the Mounted Militia I've also completed a Perry Miniatures mounted Colonel, to lead my one unit of 1812 British Light Dragoons. Now he is done a change of era and manufacturer to some Casting Room Miniatures Early Italian Wars Light Cavalry, as Phil has started his own version.
Posted by David at 07:23