As the weather has turned hot and sunny again here in the UK, at least for a few days, so it seemed like an omen for our Sudan War game here in GHQ today. Phil, in the persona of Lord Rawnsley {scion of the famed military family, tracing their ancestors back to Sir Marmaduke 'Gaylord' Robinson of English Civil War fame} took command of the Imperial Desert Column charged with the defeat of the forces of the 'Barmy Bhykli', otherwise Osman bin Lina.
He commanded a Brigade of infantry comprising the South Staffs; the Royal Surreys, the Black Watch and the Gay Gordons; a Brigade of cavalry, comprising Hussars and Dragoons; the Guards Heavy Camel Corps; a Naval Detachment from HMS Inglorious with the Gardner and Gatling guns; and finally a RA screw gun. Lord Rawnsley enjoyed a Command Rating of 9, his two subordinates either 9 or 8, depending on the throw of a dice for their first order.
For his part, the Bhykli mustered all the troops at his disposal: a dozen or so Rhubs of fanatical Beja warriors; two Rhubs of rifle armed Beja skirmishers; a large waband of Beja camelry; the Nile Arabs from the nearby fishing village and two groups of Baggara Arab Horse; all supported by a captured Krupp breech loader and the enslaved crew.
Using the 'Blood on the Nile' supplement to Black Powder, the action kicked off with the Imperial forces advancing cautiously towards the wadi, while the Mahdists waited anxiously for the order to charge! [I kept throwing high!] Finally the Baggara Horse were activated and they charged forward on the right flank engaging the Dragoons ~ 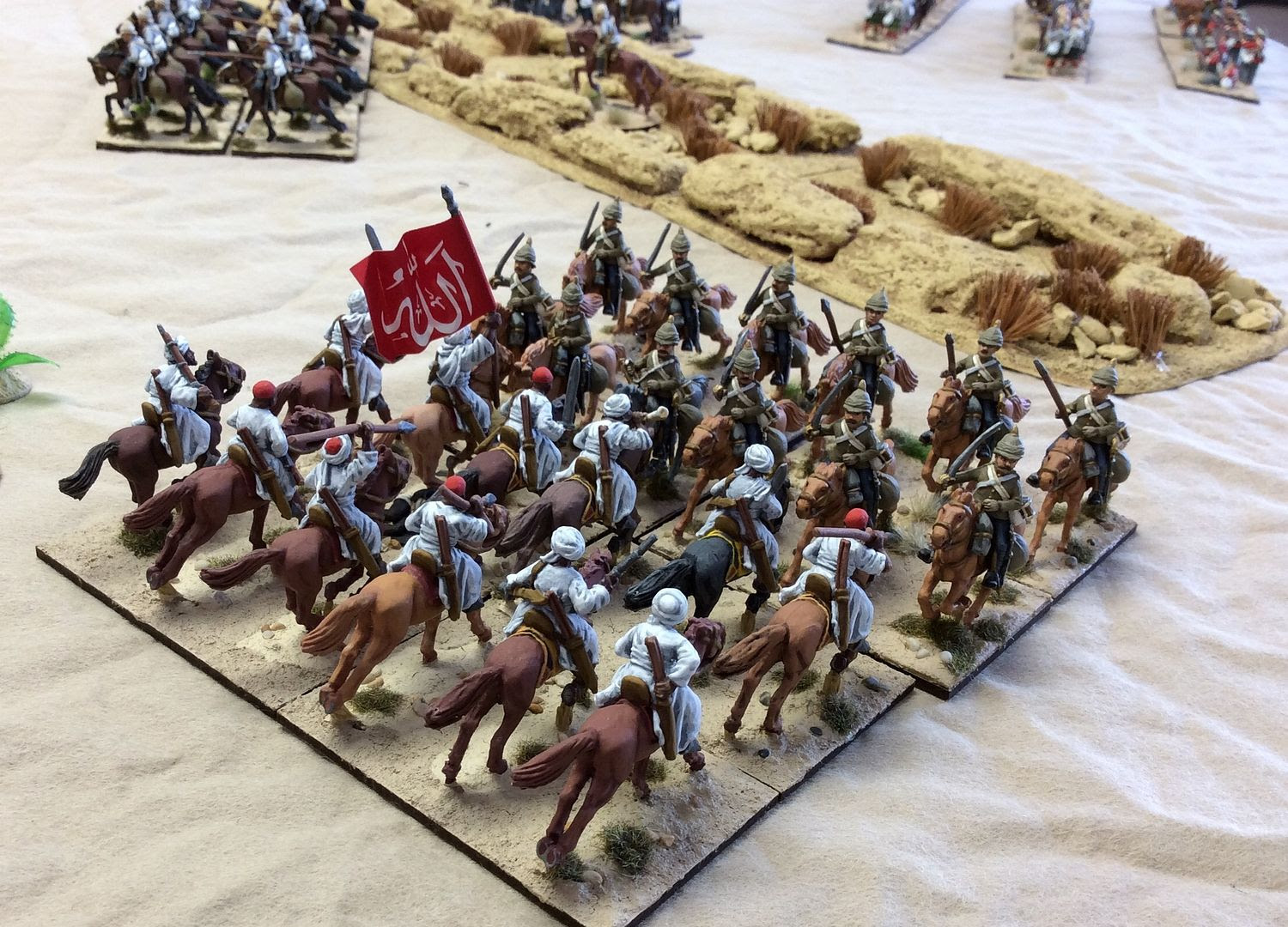 They were son sent tumbling back beyond the rocky outcrops while the Hussars bravly crossed the wadi and moved towards the village on the Mahdists' right flank. In the centre Lord Rawnsley advanced his infantry rather incautiously in line, hoping to maximise the effect of their firepower when the expected attack developed ~ 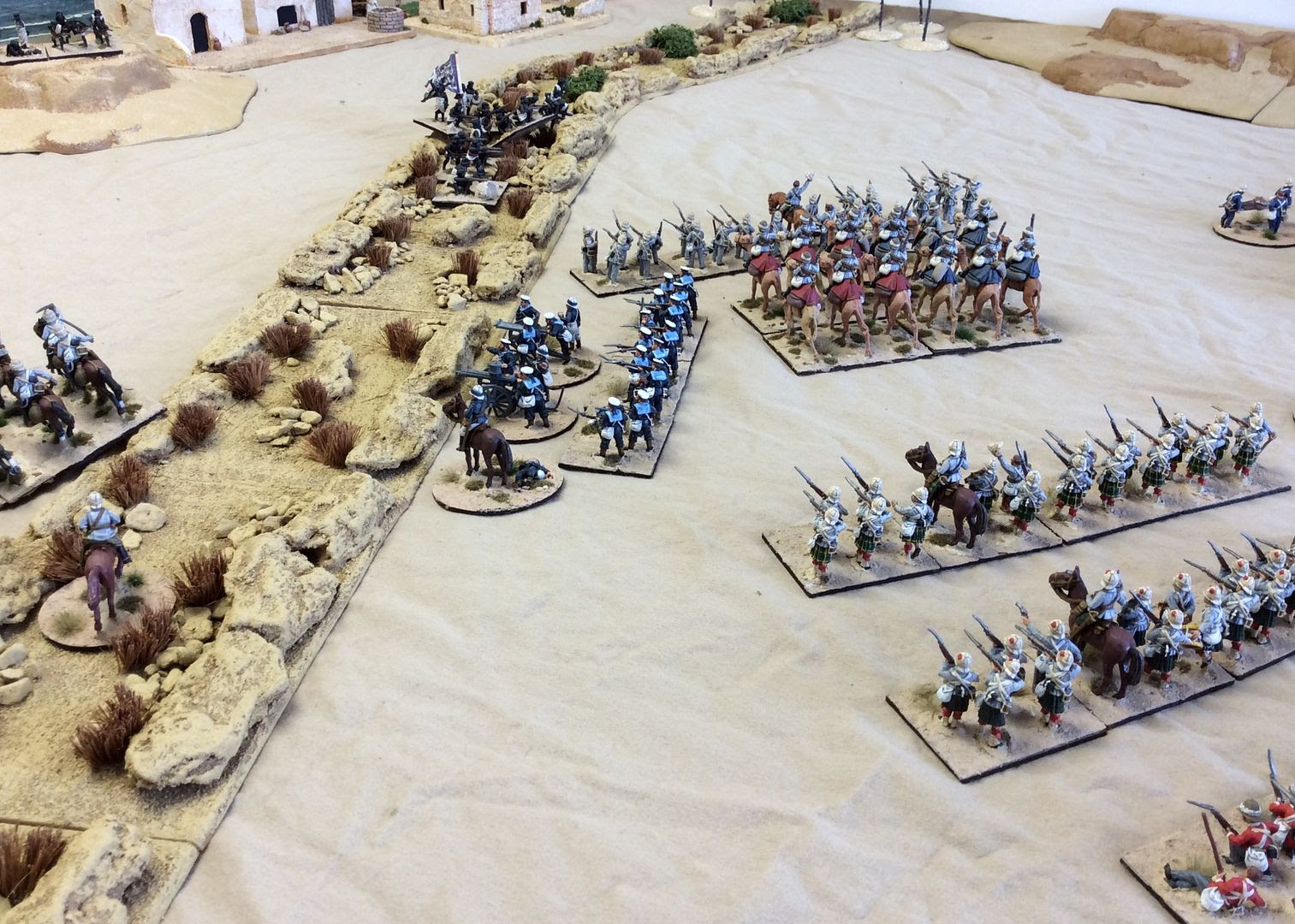 The Imperial infantry advance was very slow, leaving the Royal Surreys, supported by the Guards' Heavy Camel Corps on their left, somewhat exposed when the Mahdist hordes of fanatical Beja warriors were revealed to their front ~ 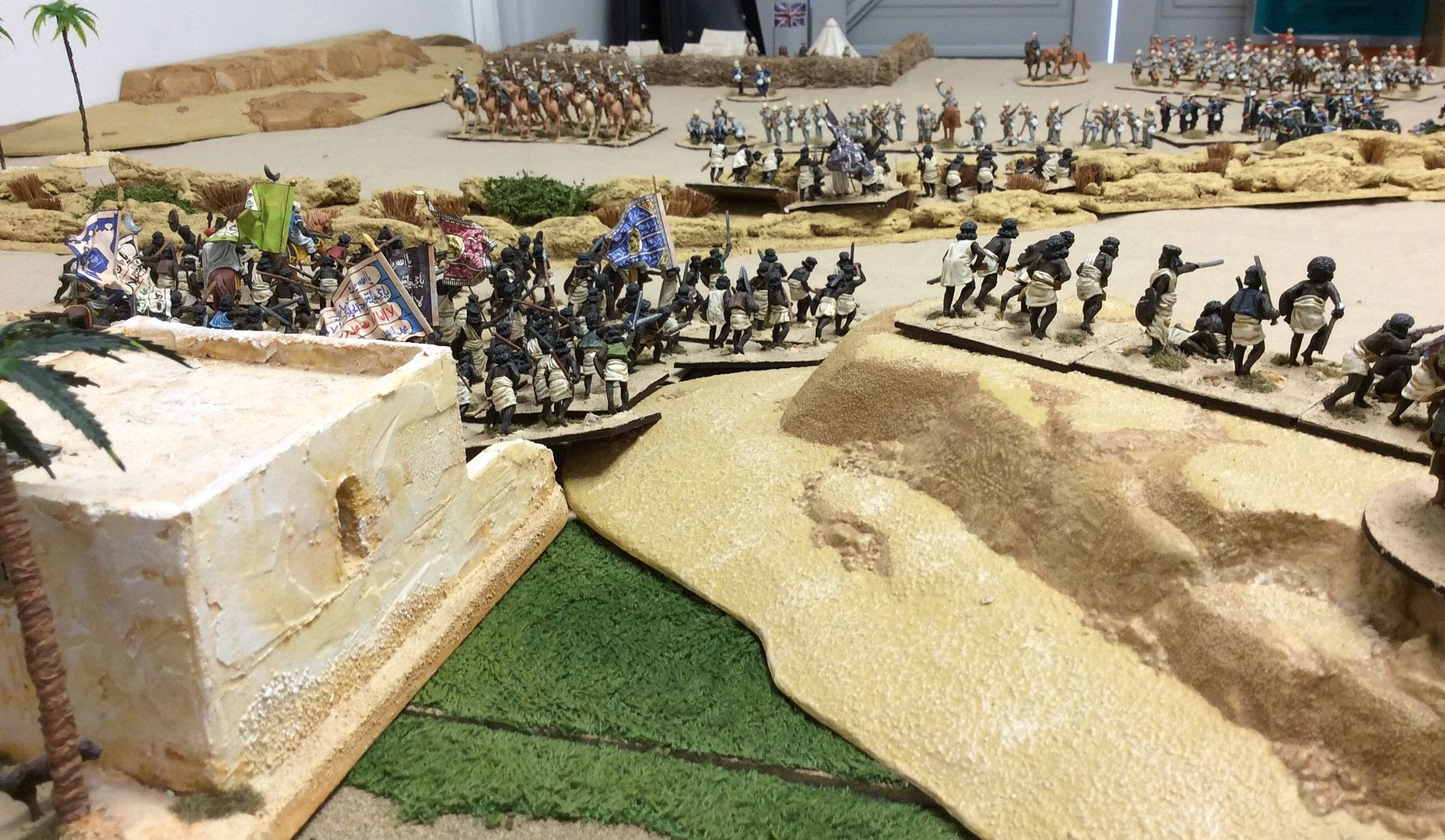 As the situation on the Imperial right flank developed, over on their left the situation looked bleak. Despite being repulsed on two occasions, the Baggara Horse had defeated the Dragoons and forced the Hussars back. Hordes of Nile Arabs had emerged from the fishing village and swarmed through the wadi towards the stalled Imperial infantry, leaving the nervous tars of HMS Inglorious somewhat exposed ~ 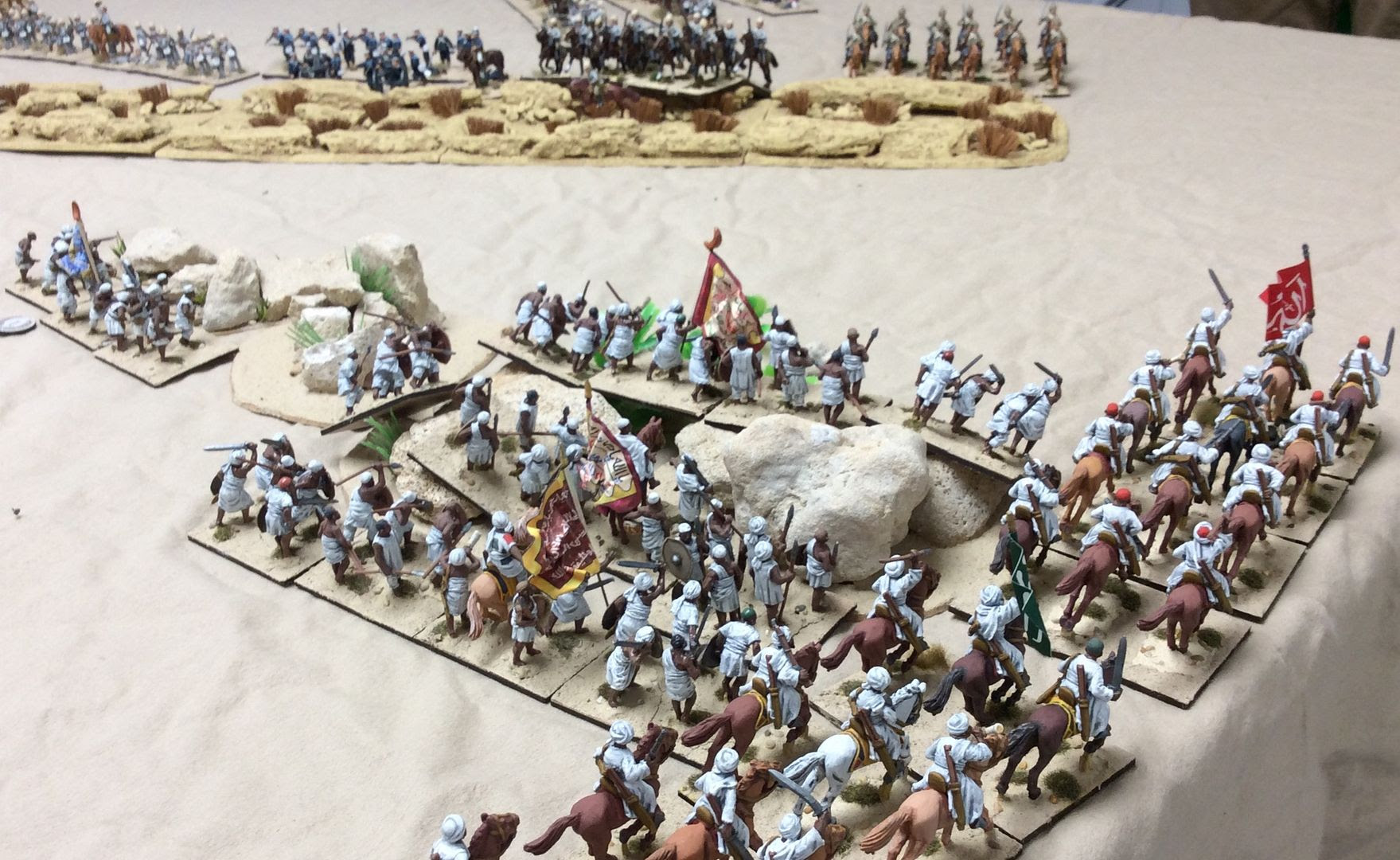 As the situation demanded action, Rawnsley was not found wanting. The Hussars had rallied and charged bravely into the leading warbands of Arabs, while the Black Watch moved smartly forward n their flank and poured fire into the supporting Arab groups. The situation was stabilized on the Imperial left flank for the time being ~ Away on the Imperial right flank, The Gordons joined the Royal Surreys and the now dismounted Guards in forming a wall of steel facing the onrushing fanatical Beja. Just at this moment the large group of Beja camelry made their appearance. Rolling the dice in anticipation of them appearing on the Imperial right flank, imagine Rawnsley's elation when they appeared away on his left, promptly blundered and left the table for good! His bacon was saved for now at least ~ Despite heavy fire and the faltering of some Rhubs of fanatics, the mass of Fuzzy Wuzzys made a determined charge for the waiting Imperial lines ~ 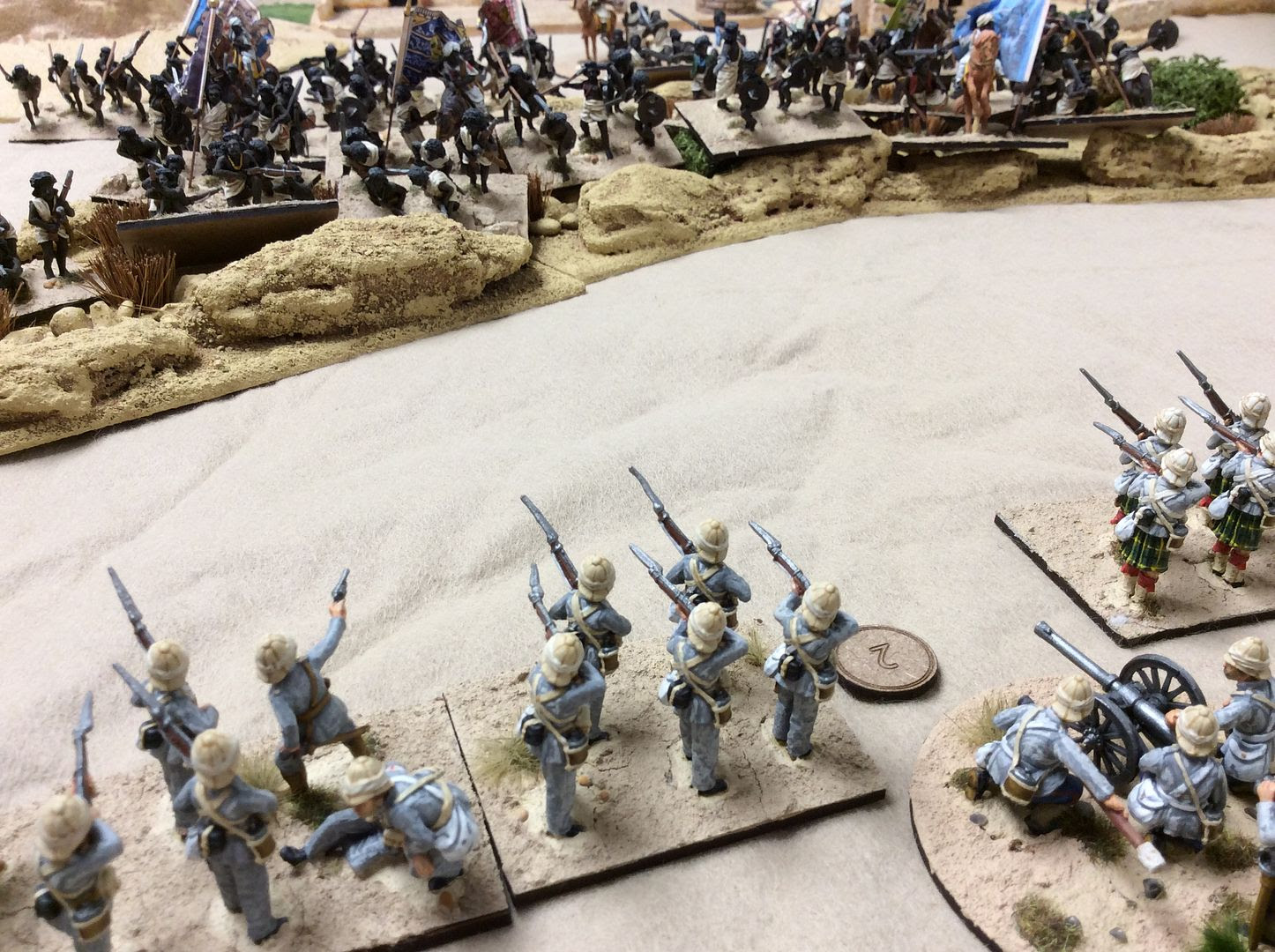 While the guns of the tars from HMS Inglorious continued to play on the Fuzzy Wuzzys, the Nile Arabs had their dander well and truly up and swept all away before them. The Imperial left flank was collapsing, leaving the tars' flank exposed to the masses of enemy troops beyond their left ~ 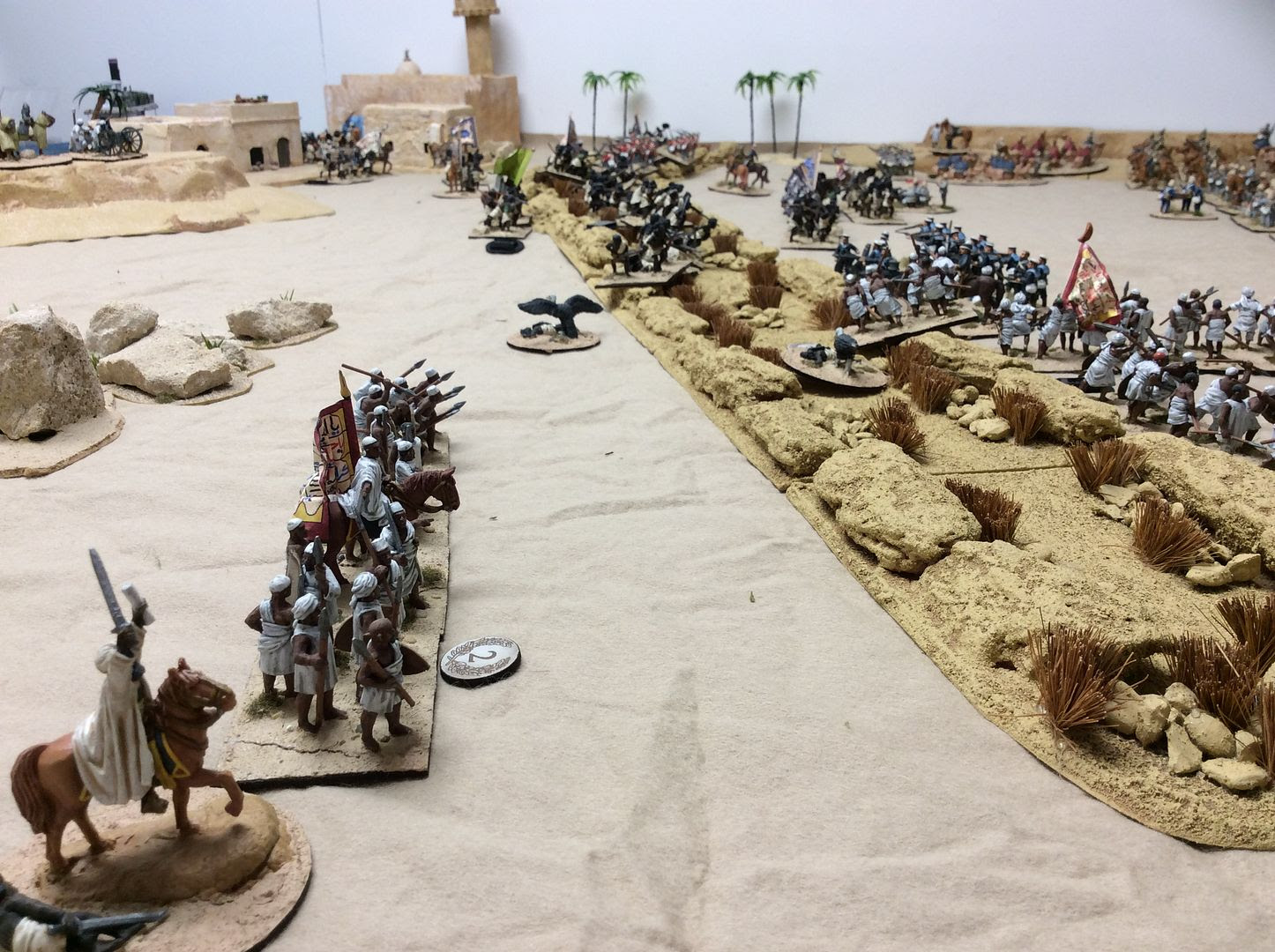 The South Staffords were soon in deadly hand to hand combat with the Fuzzies, briefly holding their own before they too were swept away. It was all up for Lord Rawnsley on this occasion as the remnants of his force fled to save their lives and the victorious Beja warriors slaughtered all who they could catch! ~

Serious questions will be asked in Parliament, you may be sure of that, while the Queen Empress will surely shed a quiet tear or two for her boys in red who will not see home again. In two weeks time we hope to play a follow up action, when the 'Barmy Bhykli' will sweep down on the regrouping Imperial forces and hope to do more damage to Rawnsley's faltering military reputation! A rare and welcome win for the 'Barmy Bhykli'!
I'm sure most of you will recognise the Perry Miniatures figures from my collections. Phil scratchbuilt the buildings of the town for me, while the huts in the village are from Hovels. The hills are from GW of course, while the palms are from S&S, the low cacti from the local garden centre and the rocks in the outcrops from Juno Beach! Andy of The Last Valley made me the extra wide wadi. The Mahdist foot flags are from the Flag Dude, the cavalry ones from a web site I found back in the day.
Posted by David at 12:17