A recent game here at GHQ featured a titanic tussle between Phil and myself set in Japan in the Age of Wars. The game centres on two roaming bands of warriors, each intent on local hegemony. To secure their gains, so far, it is imperative that they take and hold a vital bridge which will give them control over rich farmlands and ensure they are well fed over the winter. A peaceful scene, somewhere in rural Japan ~ 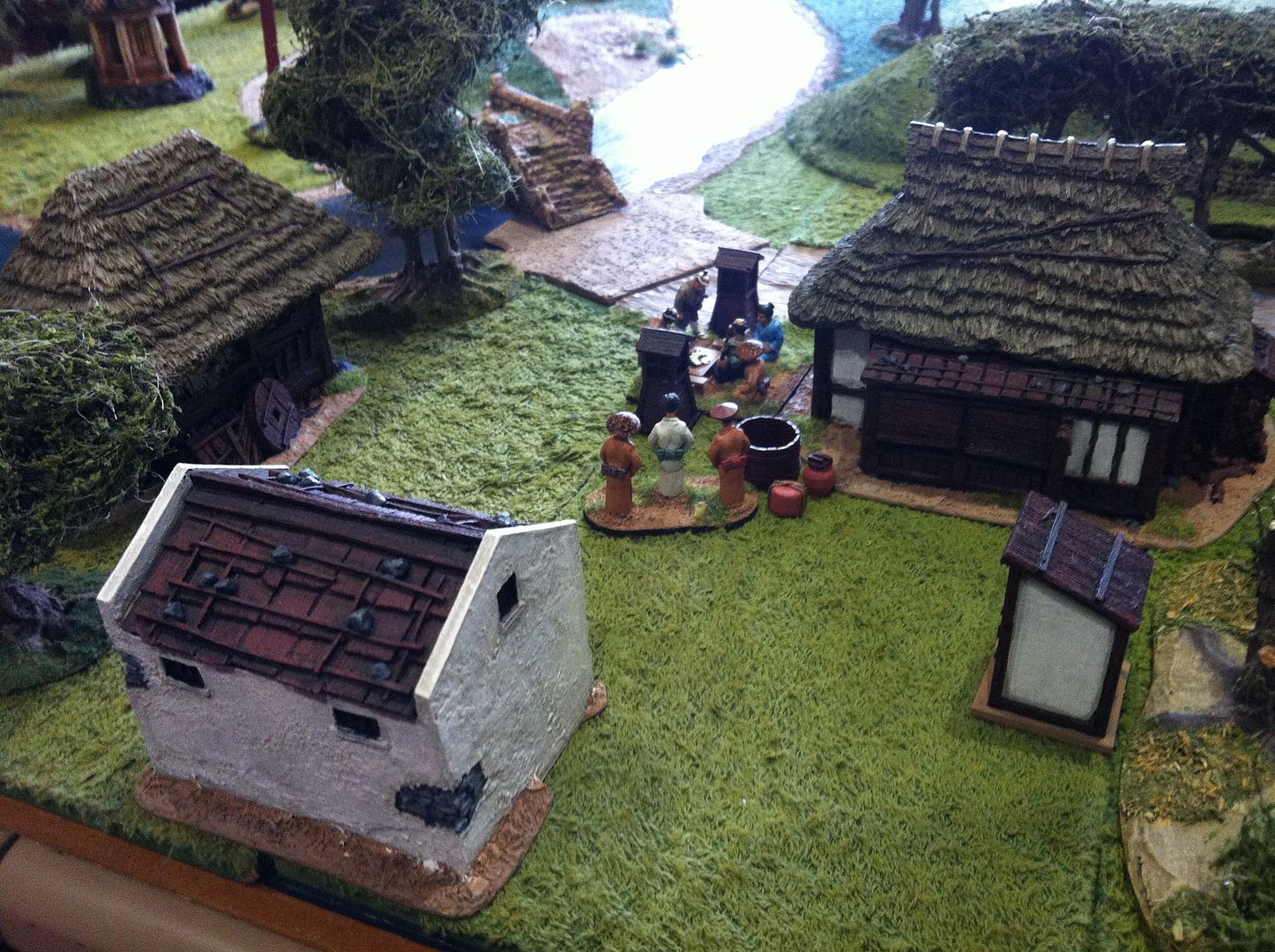 Ono Onomoro leads his weary warriors and loyal Ashigaru towards the bridge, blissfully unaware of the challenge which he faces ~ Meanwhile, that mean and underhanded nemesis, Shiro Komodorisai, has assembled a large force of masterless Samurai and unwilling Ashigaru to seize the rich farmlands for himself ~ 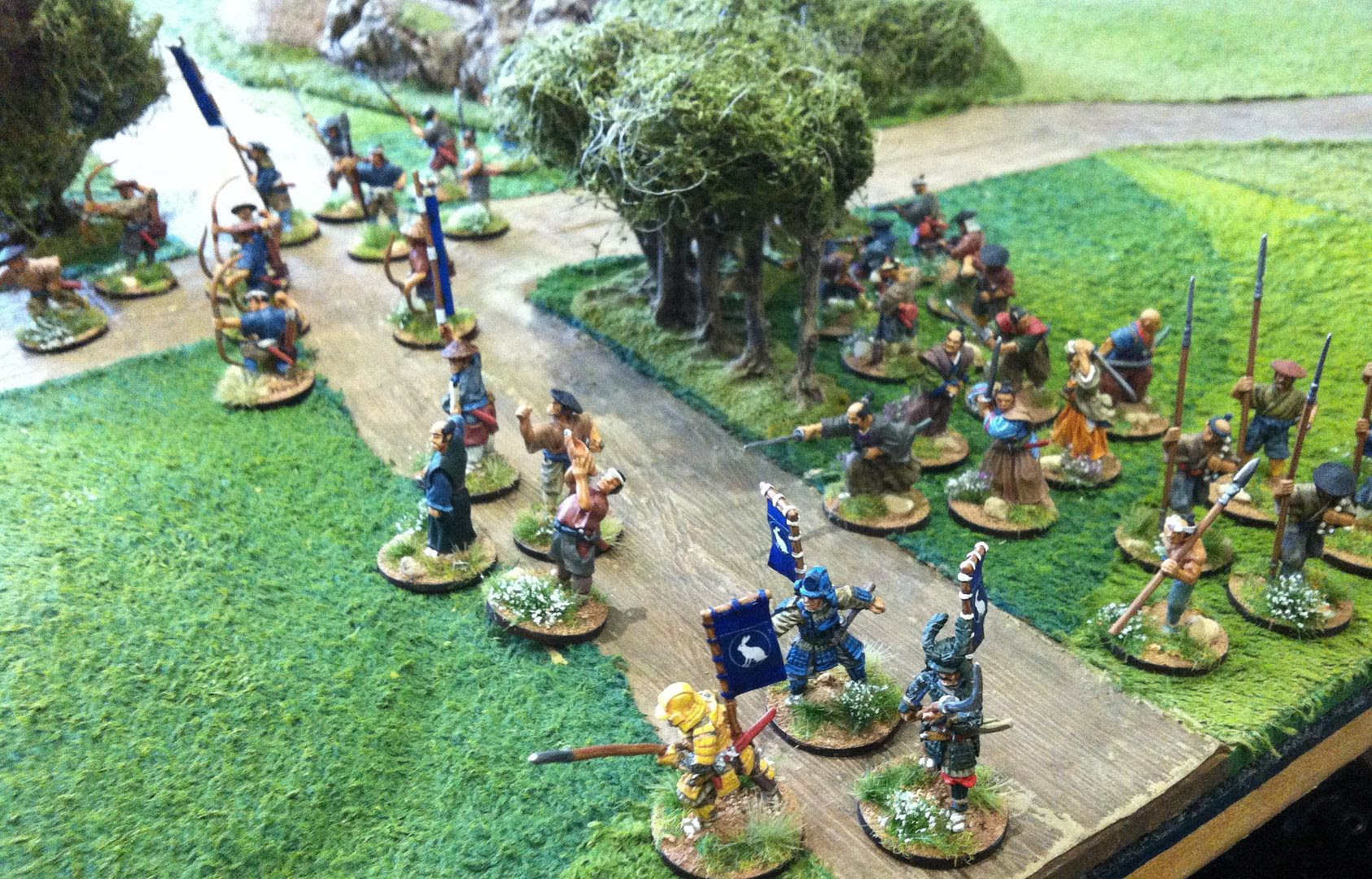 Quickly, Onomoro sends forward his loyal Samurai retainers to seize the bridge, supported by Ashigaru with bows and muskets ~ 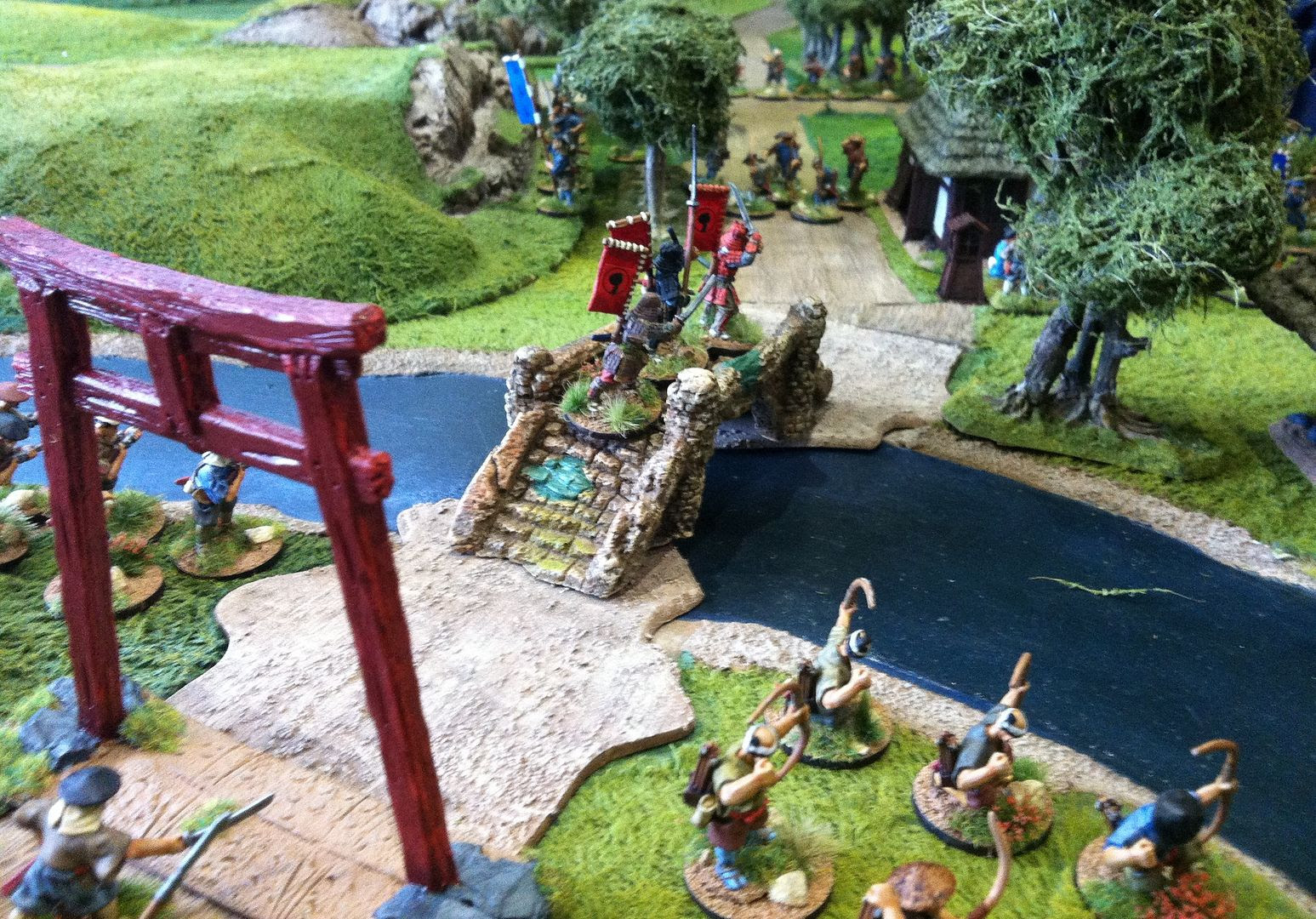 In the meantime, Komodorisai's mercenary Samurai have rushed through the farmyard, scattering the local population to the winds ~ Although outnumbered three to one, Onomoro's valiant Samurai retainers rush to save the locals and engage the enemy horde ~ 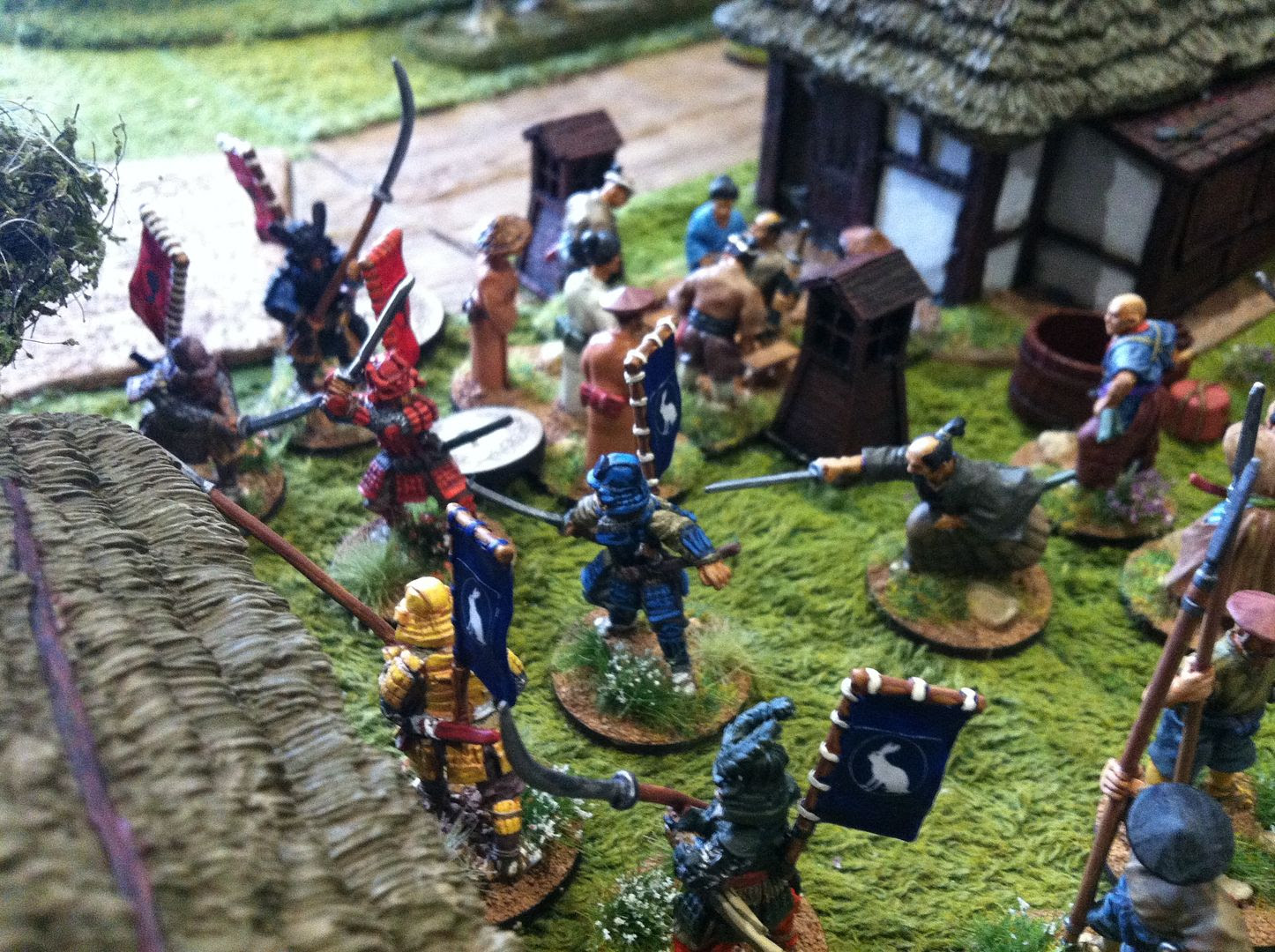 Onomoro himself rushes to support his brave men, leaving the Ashigaru to secure his flanks and deny the enemy any advantage ~ 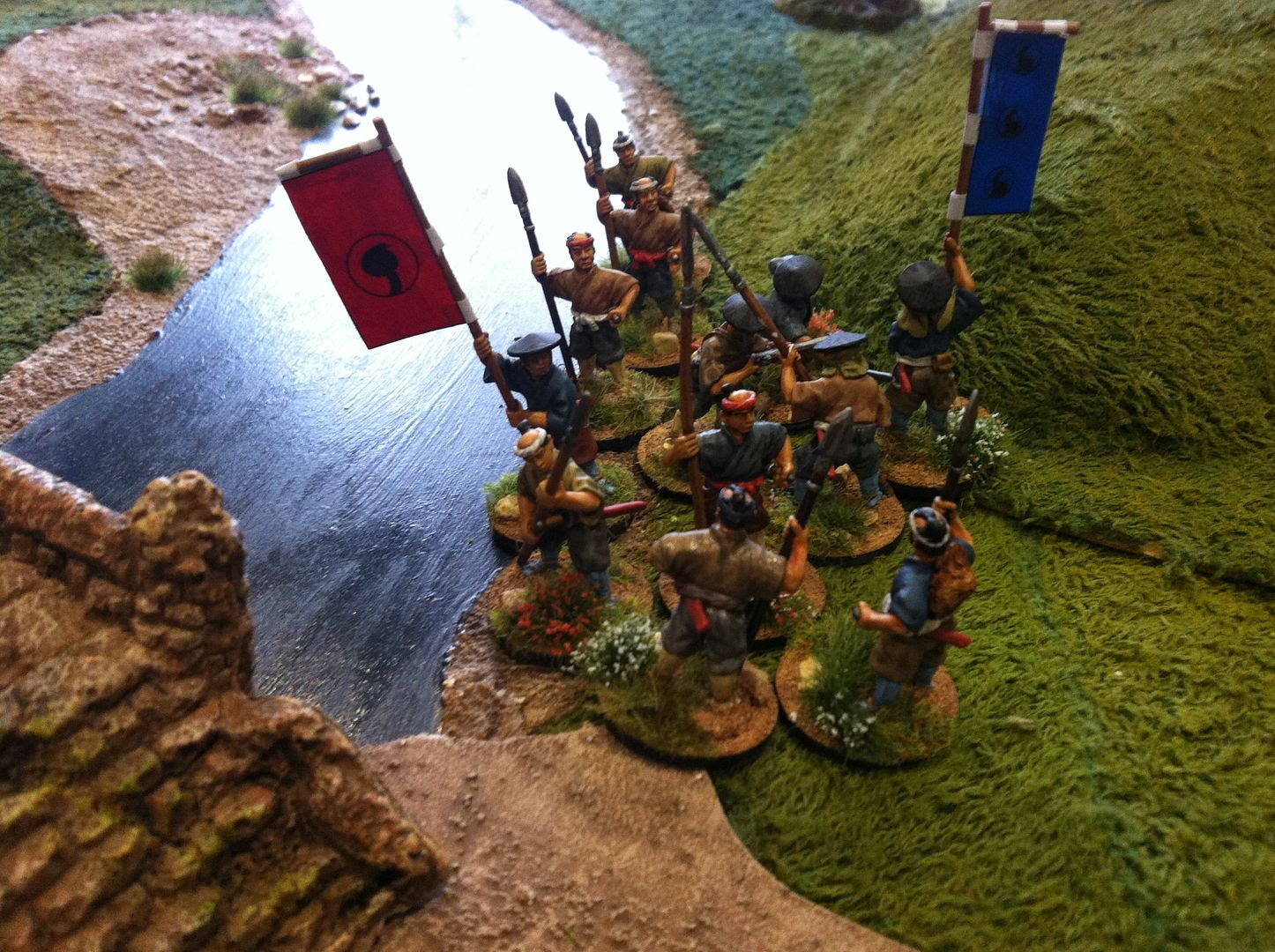 His stalwart retainers struck down, Onomoro is facing overwhelming odds! Despite slaying three of his enemy he is finally struck down from behind by the cowardly Komodorisai! 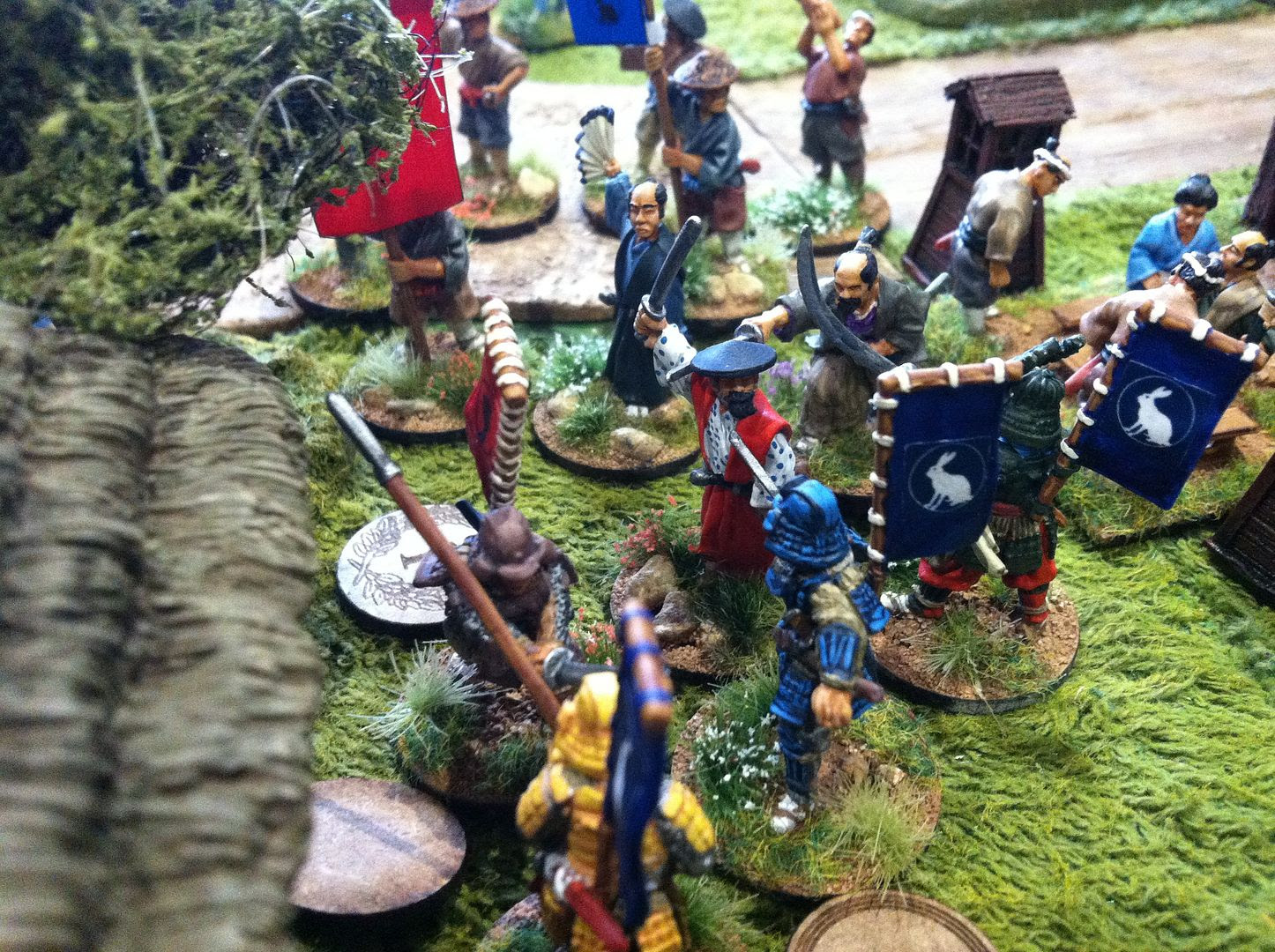 Our game lasted twelve turns, using my rules in development, Funsen, although without the usual card sequence activation. The sides were deliberately asymmetrical, with Phil's group having many more Samurai. The buildings are from John Jenkins Designs in Hong Kong, with the ephemera from our own Oshiro Miniatures. As ever the vegetation is from the Last Valley. The bridge is an aquarium pice I got at a local Garden Centre for a few pounds, although I have n't got around to painting it yet...
Posted by David at 10:48