The Heart of Darkness

Recently I've been playing around with my old Foundry Darkest Africa collection: rebasing, that sort of thing. Phil and I had tried Chris Peers' rules, but were unconvinced by the feel of the games, so I have given Black Powder a try this month in two games, firstly with Jon and then with Phil. I'll start by saying that I lost them both, although the games themselves turned out to be quite close...

While Black Powder are aimed at large tables and enormous units, yet still give rapid resolution, we have found that they work well on 6' x 4' tables, with smaller units, at no loss to the rapid resolution of events. As a house rule we allow units who fall at 4 or below in morale checks to flee for one move and then test again to see if they rally. Today in six tests only two units successfully rallied in the following turn. In combat the fleeing unit throws 2 x D6 for its movement and the victorious unit also throws 2 x D6. If the victor outpaces the looser, then the unit fleeing is destroyed and removed. Anyway, some shots from the games... 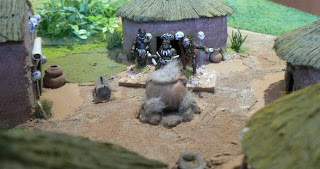 Chief Bykelezi m'Tubi contemplates the chances of success in the struggle against... 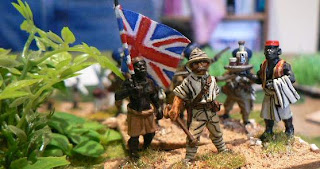 ...Robinson of the River! 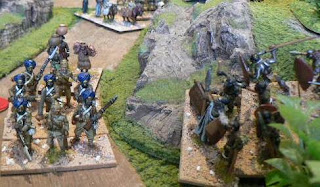 The Sikh infantry force a passage through n'Tobi Gorge, though not without a tough fight.

While the loyal, if somewhat reluctant, Askaris head over the mountains towards the native village. 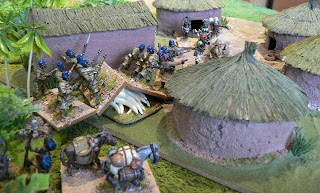 Eventually those Askaris did make it across the mountains and poured down onto Cheif Bykelezi's village... 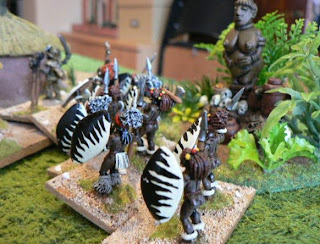 ...where they destroyed the chief's Maiden Guards and won the game!

The figures are all from the, now truncated, Foundry range while the village and jungle terrain are scratch built. Local Garden Centres are a good source of plastic aquarium plants which make convincing jungle on the tabletop. The village huts have card formers and are coated in Basetex ~ Dried Earth shade ~ and washed in Valejo Iraqui Sand/Mahogany Sand. The thatched roofs are made with layers of green garden string washed with PVA glue and dry brushed when hardened. The detritus scattered around the village was from Front Line and the Foundry 'Village Goods' set

We have all found the games enjoyable, so we'll probably persevere with Black Powder for our occasional Darkest Africa game. That's all my games for this month: two wins out of five played! Normal Service is definately restored here in GHQ.
Posted by David at 09:41