The Battle of Pyddle Down

Being an account of the battle fought this day between the forces of Parliament, commanded by that worthy and stout gentleman, Obadiah Bykleigh, and the forces of the foul tyrant, commanded by the gout-ridden turn-tail, Sir Marmaduke Robinson!
In other words, the latest ECW game here in GHQ using our favourite period rules, "Victory Without Quarter!" fought out between Phil and myself this afternoon {while our wives were off at the Coven Craft Club ~ hope it doesn't have 13 members!!!} 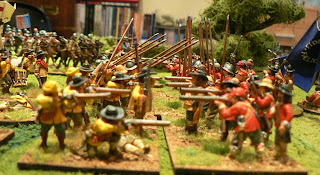 Staunch and true, Englishmen all!
A push of pike between Sir Gilbert Talbot's Foote and Fairfax's Foote. The new bases are all MDF made by Warbases and are 80mm x 50mm ~ so much easier to use than all those fiddly single bases or even 40mm x 40mm bases if it comes to that!

﻿On the left and right flanks of Parliament's army the cavalry melees did not go well; after some initial successes the Parliamentary horse largely quit the field on the left, though they were able to fight the Royalists to a standstill on the right. 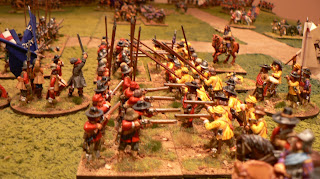 The Foote of both sides slogged it out in the middle of the table, until with two turns to go the Royalists were finally broken... 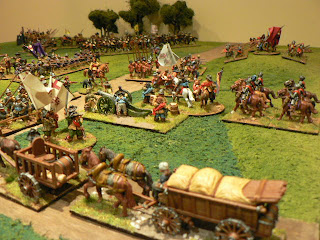 The Royalist Command stand can only stand by and watch as the Foote flees in route and the baggage is threatened with capture and pillage... 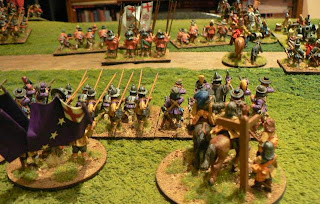 Obadiah Bykleigh joins Lord Brooke's Foote for the final decisive advance on the fleeing Royalists. The table top at the conclusion of the battle makes a sorry sight for the Royalist cause, with only some minor cavalry successes to sustain their spirits.. 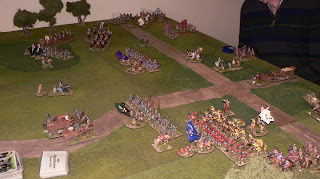 So, the victorious General, Obadiah Bykleigh, pauses for a quick 'portrait opportunity' after the battle... 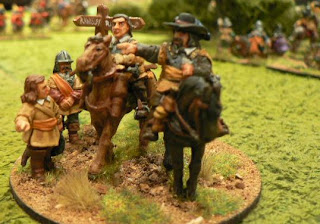 The figures are a mixture of, predominantly, Foundry; Perry Miniatures; and Warlord Games; with odd figures from Redoubt and guns from Bicorne﻿. The really wonderfully drawn flags are all from GMB ~ probably the most frustrating website I've ever tried to order from, a flag site with almost no illustrations for the ECW ranges!
Posted by David at 11:29