For this week's game here in GHQ Phil wanted to play a Sudan War game, so, ever eager to despatch the unbeliever, The Barmy Bhykli rallied his forces ready for action! The scene is set, ready for the action to unfold ~

The fortress is rather dated and run down, occupied by an Egyptian force awaiting reinforcement. In a nearby deserted Sudanese village some Bashi-Basooks have encamped. Their role is to keep open the likely approach of the British relieving column. 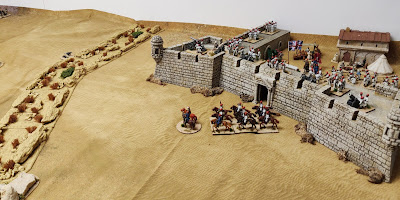 Meanwhile, the cunning Bhykli has mustered his army determined to defeat the Egyptian occupiers and deny the fortress to the British. 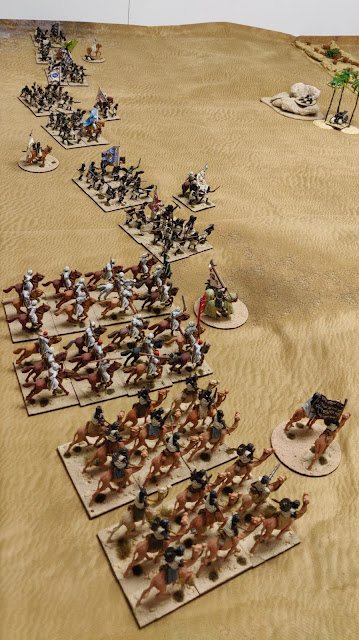 Speed is of the essence for the Mahdists! The relief column can arrive after 3 Turns, so an all out assault is the order of the day. The crumbling ruins provide hard cover from rifle fire, but not from artillery fire. Read on to see how the action unfolded ~

Mahdist artillery is directed to fire on the Egyptians cowering behind the crumbling fortifications, covering the advance of the first of the rifle armed Fuzzies! The Rubs advance fearlessly and take what cover they can in the wahdi.

On the Mahdists' right flank all does not go according to plan from the first moments! The camelry refuse to advance, bogged in soft sands no doubt! The Arab horsemen are strung out along the rigde and only one element can engage the enemy! If the village is not captured swiftly the Relief Column may sweep in on the undefended flank of the Mahdist attackers!

Far from cowering in fact the Egyptian artillery pound the attacking Fuzzies, although without inflicting many casualties. Combined with the rifle fire of the Egyptian infantry the effect is to force the heads of the riflemen down. For now the walls are safe from attack!
While the rifle armed Fuzzies are exchanging fire with the Egyptians in the fortress the first of the supporting Rubs advances rather disjointedly towards the assault. Surprisingly the wahdi proves more of an obstacle than expected and the attack becomes disjointed.

Before they can sweep into the village though they are charged by the Egyptians and engaged in a ferocious melee of swirling steel! 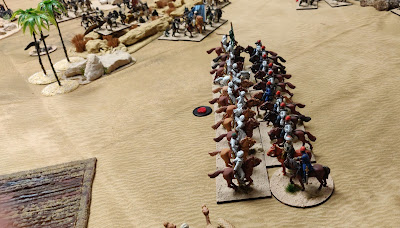 The Arabs are sent fleeing to the rear, Broken by the fierce charge and furious melee! With the way clear the Relief Column headed by the sailors of 'HMS Repulsive' with their machine guns, marches directly into action. There is no sign of the force sent to shadow their approach!

Having finally mustered for the assault the Fuzzies are halted short of the walls by the heavy fire from the defenders lining the parapets! In Disorder and with their morale Shaken they are a sitting target for the naval gunners and riflemen who decimate them in no time at all.

With his forces completely Broken, and with no sign of the Shadowing forces, the Bhykli is forced to abandon the assault. A stunning victory for Robinson Pasha!