I've made a bit of a start on my part of our Italian Wars project. So far it consists of a minor Command base and a base of Swordsmen, with a second such base underway. I've nothing else undercoated for painting yet, as we are waiting on the bases to be cut to our specification by Warbases. My Papal Army of Pope Alexander VI is based around The Assault Group's Papal Army Offer, supplemented by various extra bases. I joined their Membership Scheme for a year to get 10% off any orders I made and free postage, making a decent saving on my initial and subsequent orders. I've supplemented these with some Warlord/Pro Gloria figures for my second pike block and with some extra Gendarmes from Wargames Foundry. I also picked up a very large gun from a Trader at Wargamer last month from the old Games Workshop Empire range. The clerical element was provided from Perry Miniatures and some hand gunners from Front Rank.
The first base I painted was three figures from Casting Room Miniatures which Phil gave me, together with a figure he'd already painted, as a bit of a guide I think ~ 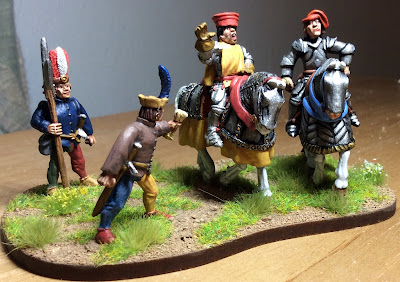 The first base of Swordsmen consist of a mix of manufacturers: three from Warlord/Pro Gloria; one from TAG and one from Foundry ~ 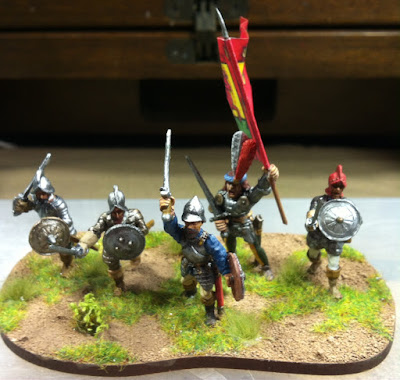 When our custom bases arrive I shall be able to spray undercoat more figures and box them up ready for transfer to the painting desk when their moment in the sun arrives... In the meantime, back to the 23rd Foot in the AWI for now!