The next game scheduled for GHQ falls on next Monday, when Phil and I will play a decent sized ACW game using Black Powder and some of the amendments suggested by the supplement, 'Glory Hallelujah!' In truth, although I've read these several times now, I still have not taken them all in. Its an age thing. The game will give me the opportunity to put some of my recently completed Dixon Miniatures Rebel infantry on the table in the form of a Georgia brigade. Over the last couple of weeks I've been painting up another unit, Union cavalry this time. Sue bought these for me from a bereavement sale at the Falkirk show two and a half years ago, so they were long overdue to make it onto the painting desk! I've also started on another cavalry unit, Rebels this time, which I collected from Spirit Games in Burton on Trent and Trevor Dixon at Claymore. These bring the respective number of units in my collection to three Union regiments and four Confederate. They don't often figure in our games in GHQ so I shall try to wangle them into the scenario in the coming days! 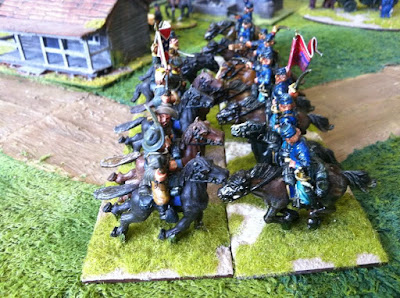 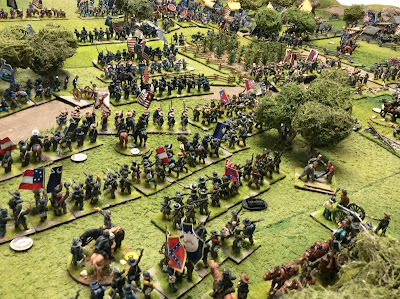 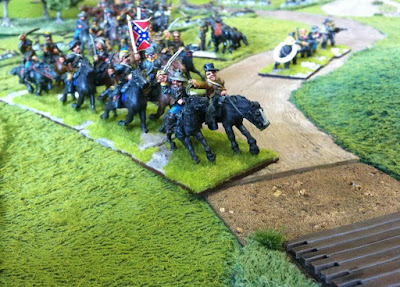 Three Oldish photos of my ACW collection in action here in GHQ. I hope to have a game report up here on Tuesday next week before I'm away from base again for a few days in Somerset. In the intervening few days I hope to post something else to wet your appetite for the coming game.
Posted by David at 10:21