"The boys was spoilin' for a fight!"

It seems like an age has passed since Phil and I last managed a game here in GHQ, so today's game here was eagerly anticipated by at least one of us! We had settled on an ACW game before Phil's recent holiday, so over the weekend I had laid out the terrain, determined the objectives for the two sides, organised the orders of battle and worked out the turns each brigade would enter the table: all this while battling gallons of snot and runny eyes with a stinker of a cold! It was more than worth it though when battle commenced this morning!
We chose to give the Black Powder rules a run out, incorporating some of the rules suggested in the Glory Hallelujah supplement, which I confess I've only glanced through a couple of times before today's game! Phil would command the Confederate and I the Union forces. Turn 1 sees the Union army encamped along a river somewhere in northern Virginia, with one Brigade and supporting artillery guarding a strategically important bridge and a second on the road to support their position as Reb scouts have been seen in the vicinity in recent days. In fact the Rebs have managed to deploy a force threatening the Union's position, with three brigades able to enter the table on turn one. Phil opted to send one brigade along a road on his left flank as a diversionary attack, while the other two Brigades entered the table and marched straight for the Union position. {The Union's third brigade, of New York veterans, could only enter down the road when the Regulars ahead of them had cleared the way. Their fourth brigade could not enter until Turn 5 on the Union's left flank.} 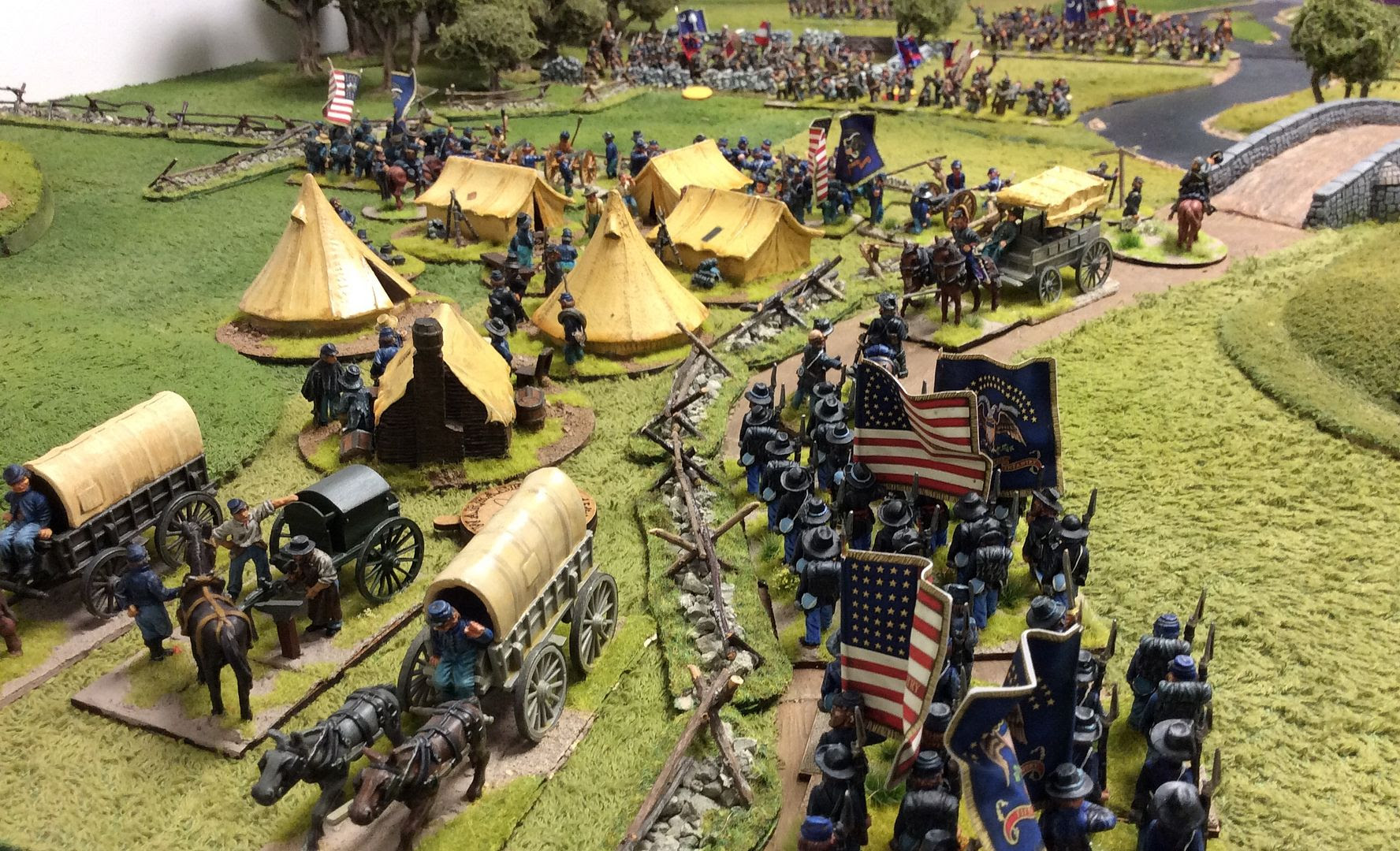 The early turns saw both sides failing command rolls: Phil's diversionary attack on the Union right was bogged down on Virginia's unseasonably muddy roads, while the Brigade of US Regulars found their approach blocked by an ambulance evacuating casualties! 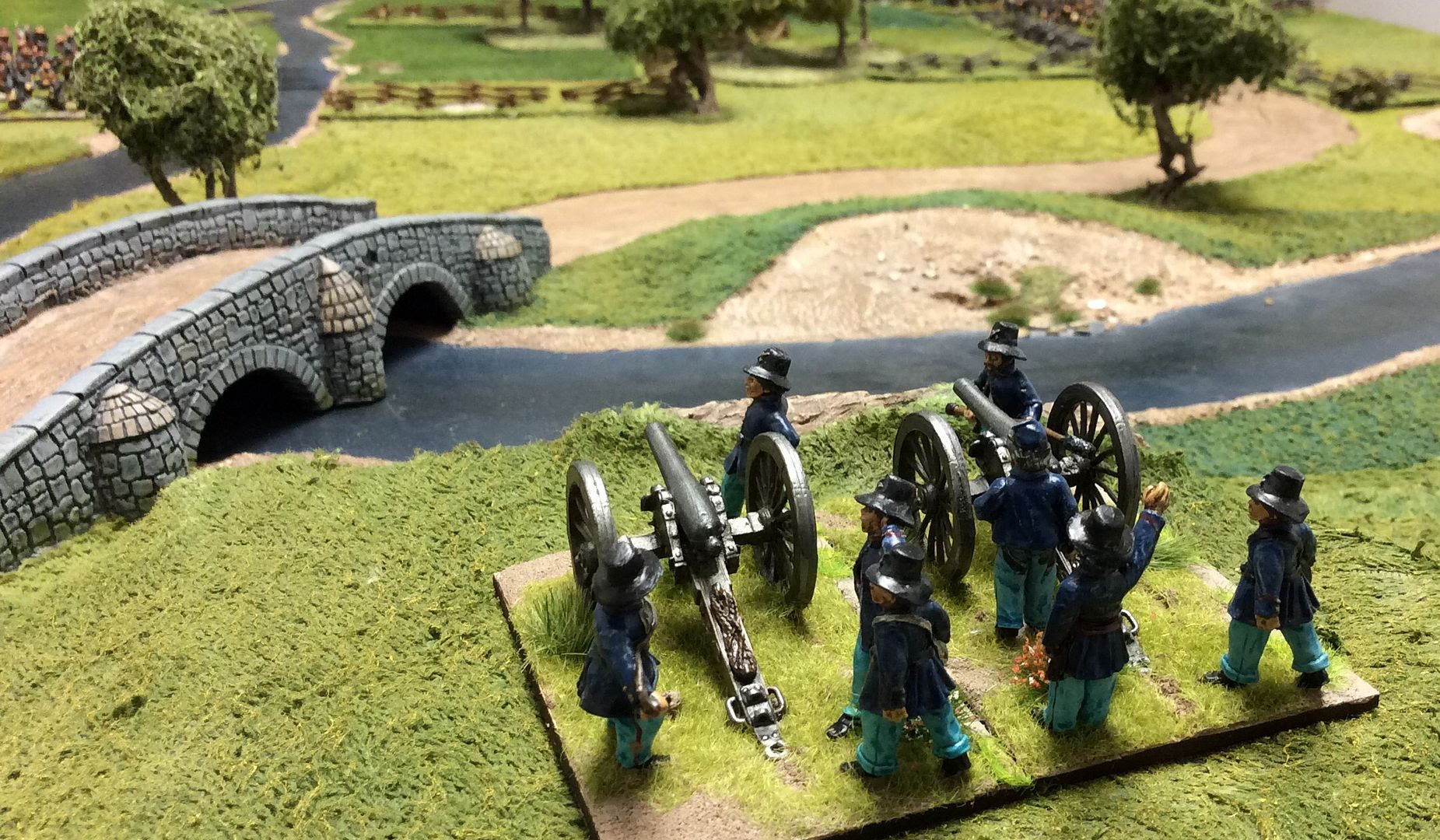 A view from Battery B, US Artillery stationed on the heights overlooking the bridge, and in the early turns the only Union presence on their threatened right flank! 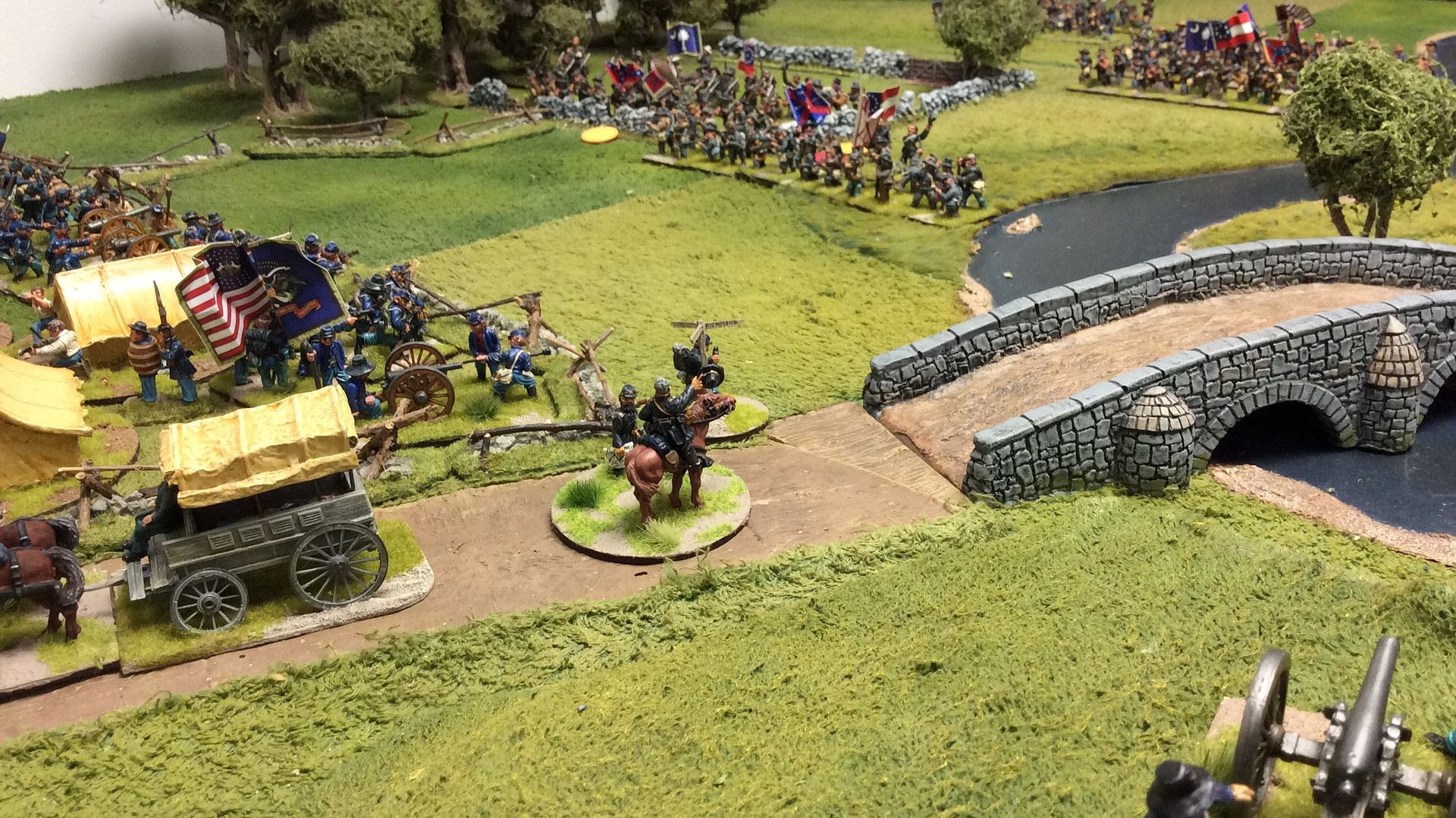 After initial confusion amongst two Reb brigades, caused by Command Roll blunders, the attack finally gathered momentum along the front of the Union position. Useless S Bykleigh can be seen anxiously scanning the enemy advance as he awaits news of Union reinforcements marching to the sound of the guns! 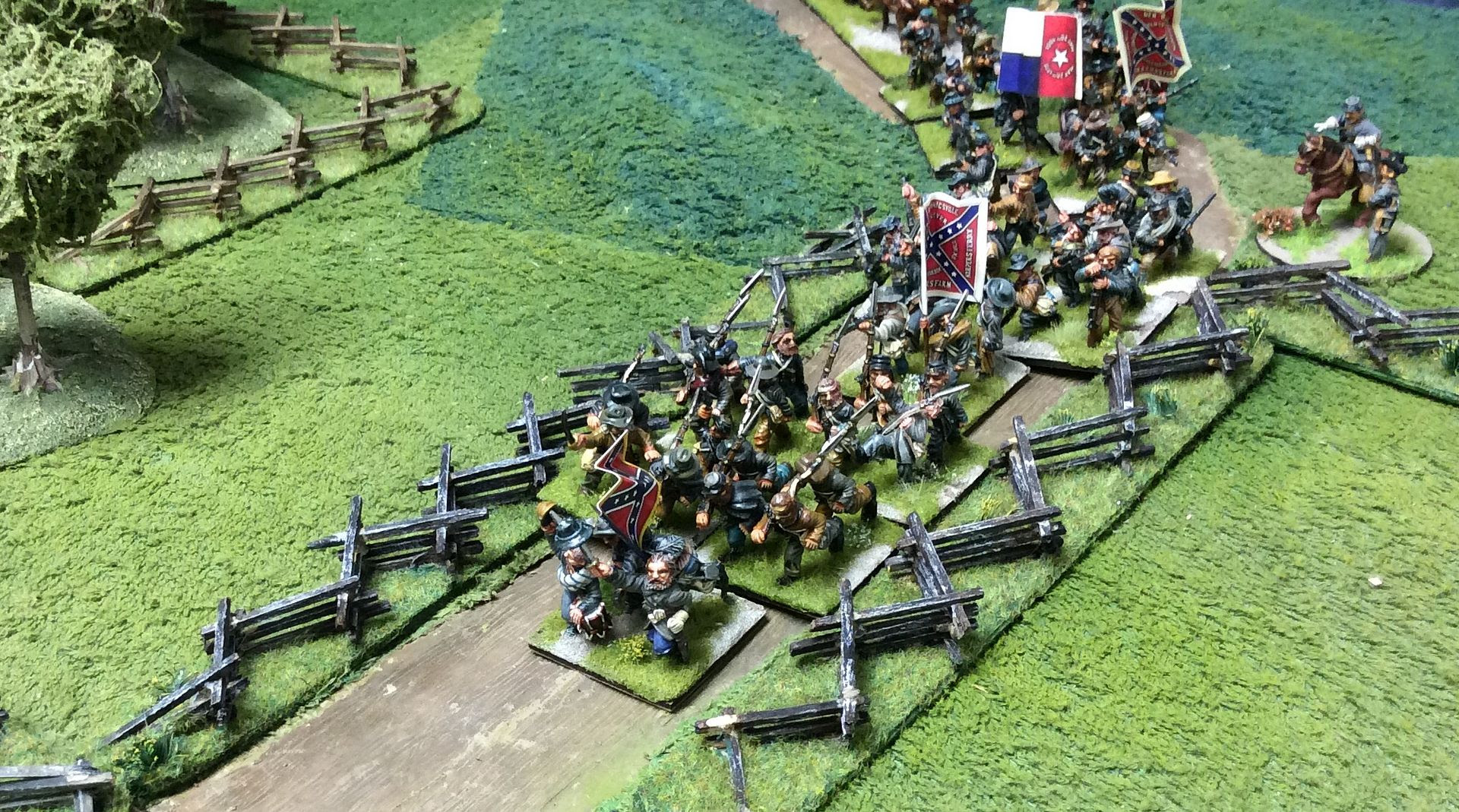 Just as the attackers were gathering strength for the assault, the diversionary attack on the Union's right finally got underway. Those roads must have been mired and rutted! 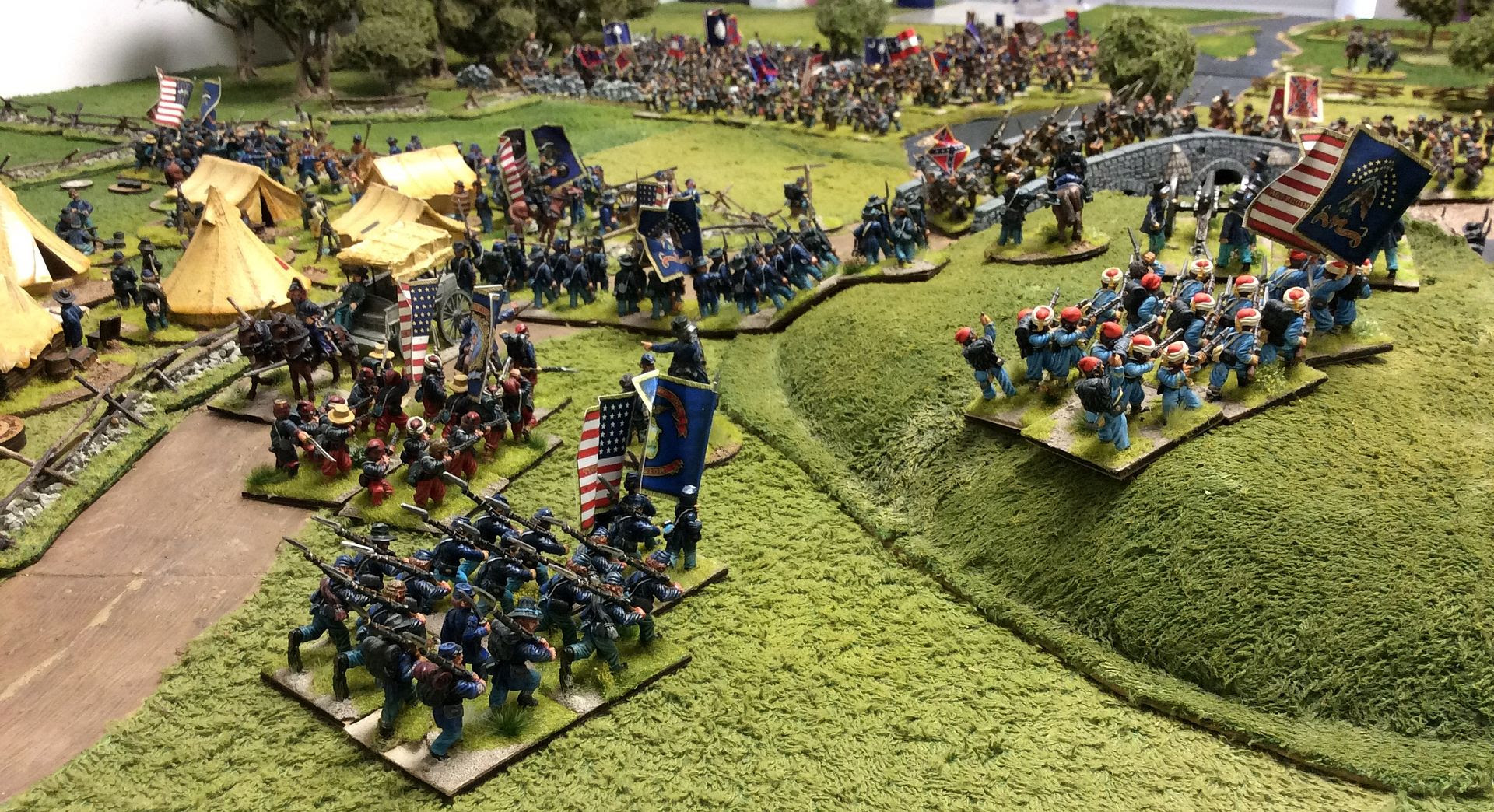 In the nick of time the 'New York boys' make for the heights overlooking the bridge, while the Regulars brace themselves for the expected charge from the onrushing Rebs! Over in the centre ominously large numbers of Rebs can be seen approaching the nervous boys holding the fence line! "Pour it into 'em boys, pour it into 'em." 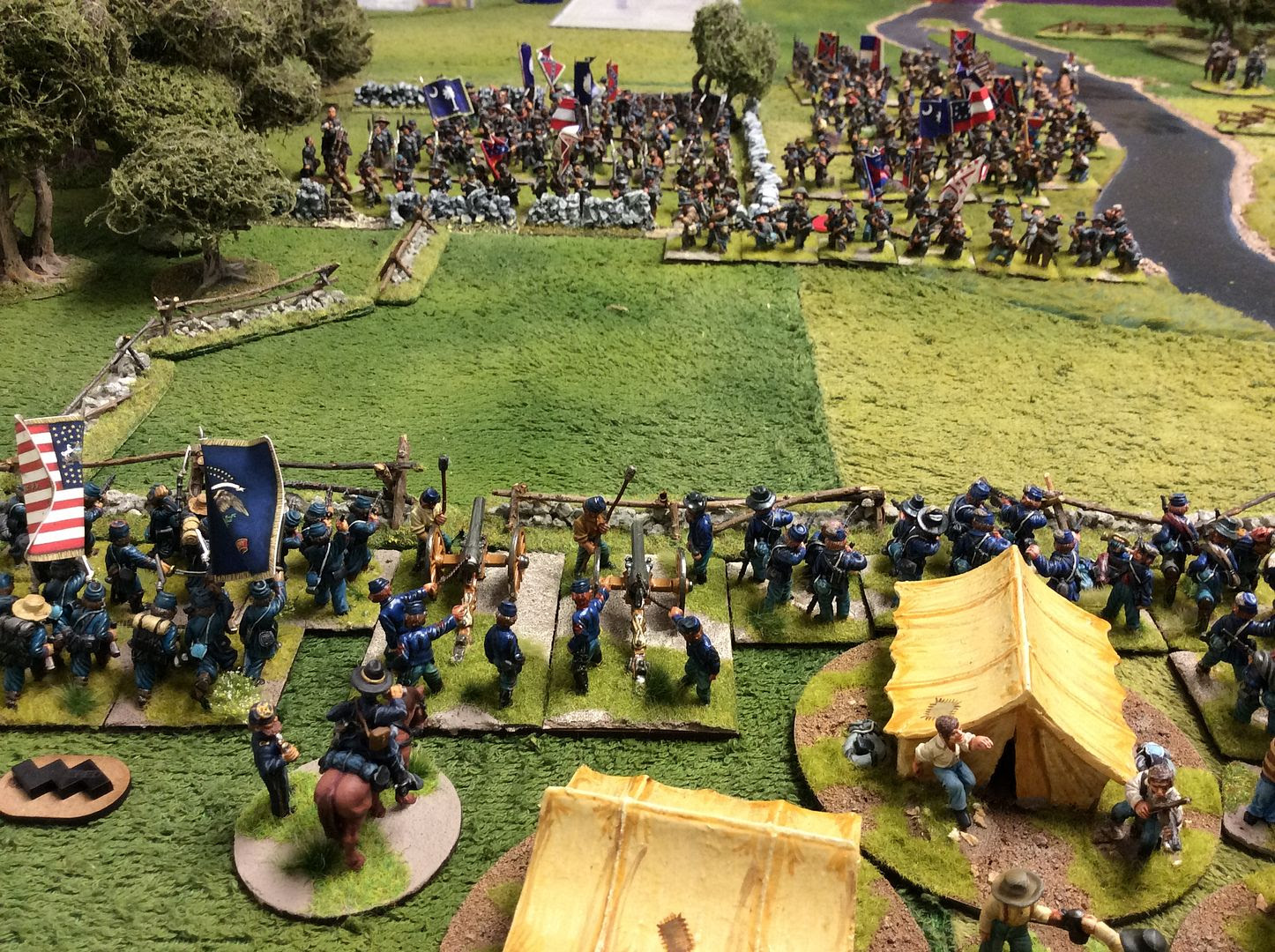 Turn 5 came as a massive boost to the Union forces with the reinforcing brigade successfully entering the table and making three moves on the Reb's right flank. Meanwhile the thin blue line continued to hold the fence line against increasing Reb pressure. 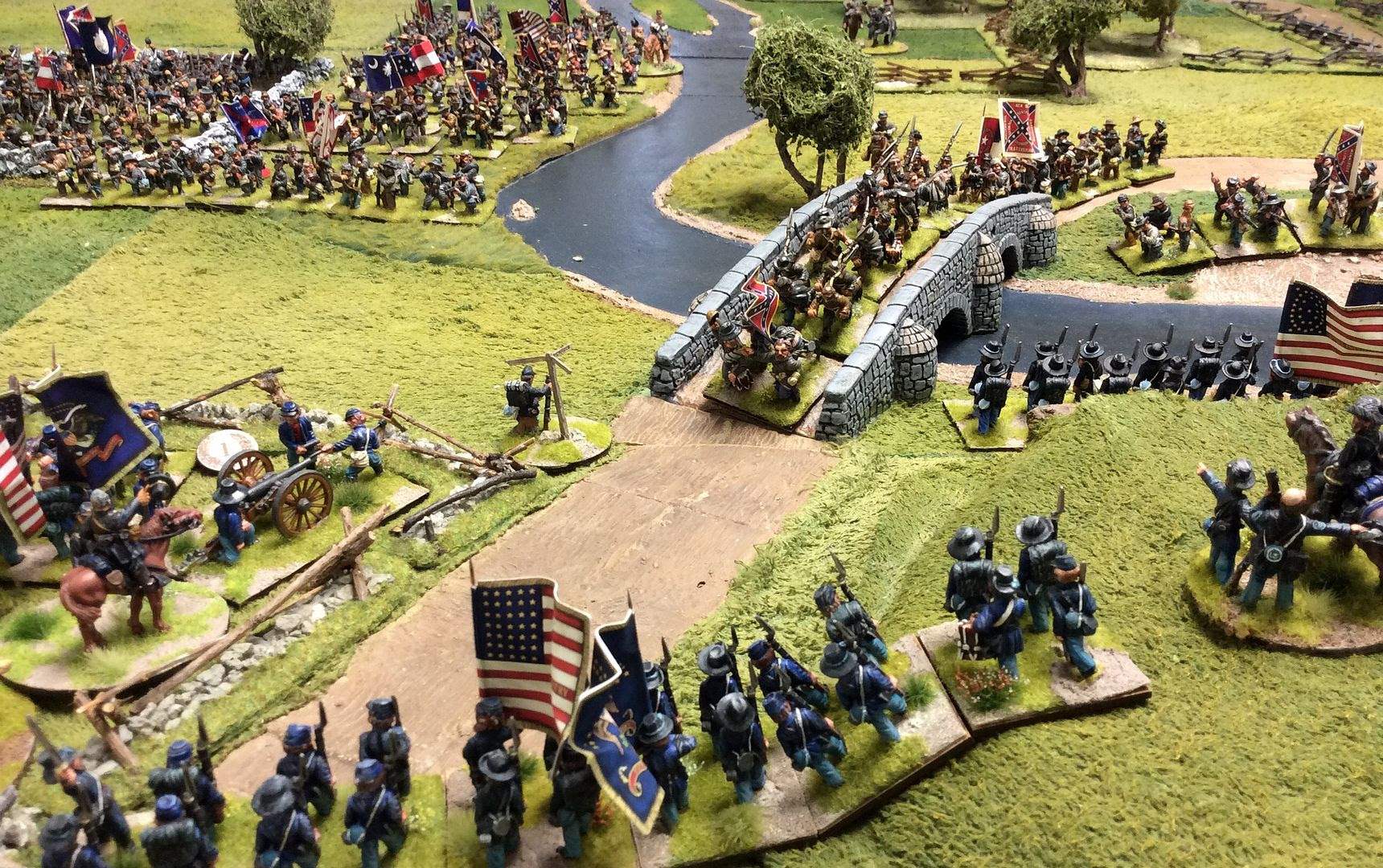 Back over on the Union's right flank, the Rebs pressed again to get a foothold over the bridge. The Regulars were coming under fire from supporting regiments within the Reb brigade, while artillery played on their flank from close range. Surely the lads could not take such punishment for long! Indeed they could not, suffering the indignity of becoming 'Whipped', they retied to safety! 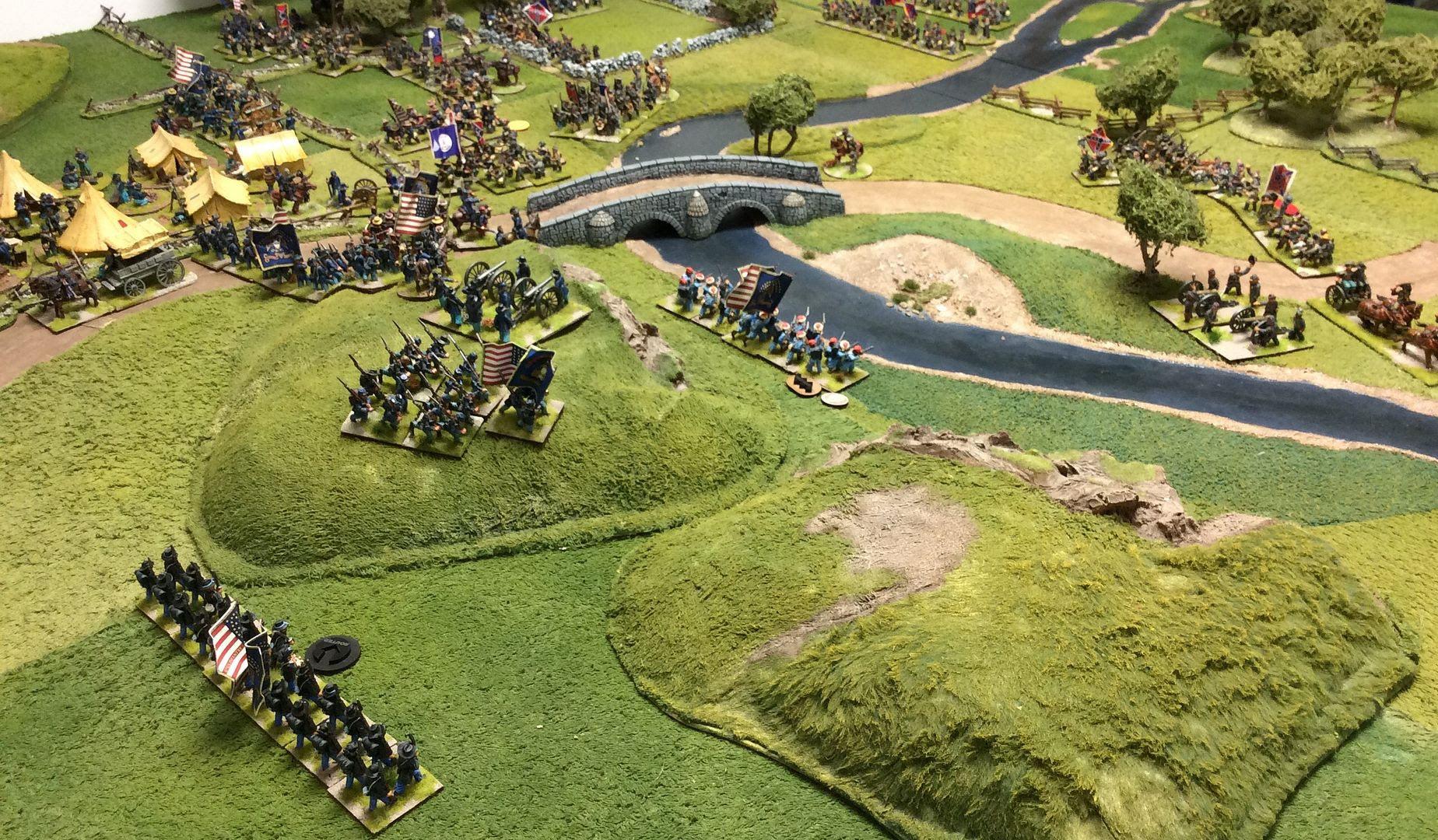 Despite the loss of the Regulars, the right flank held and the Reb attack was bloodily repulsed. In the centre the Rebs kept on coming despite losses and finally a Union regiment failed, becoming whipped and leaving a yawning gap in the line. 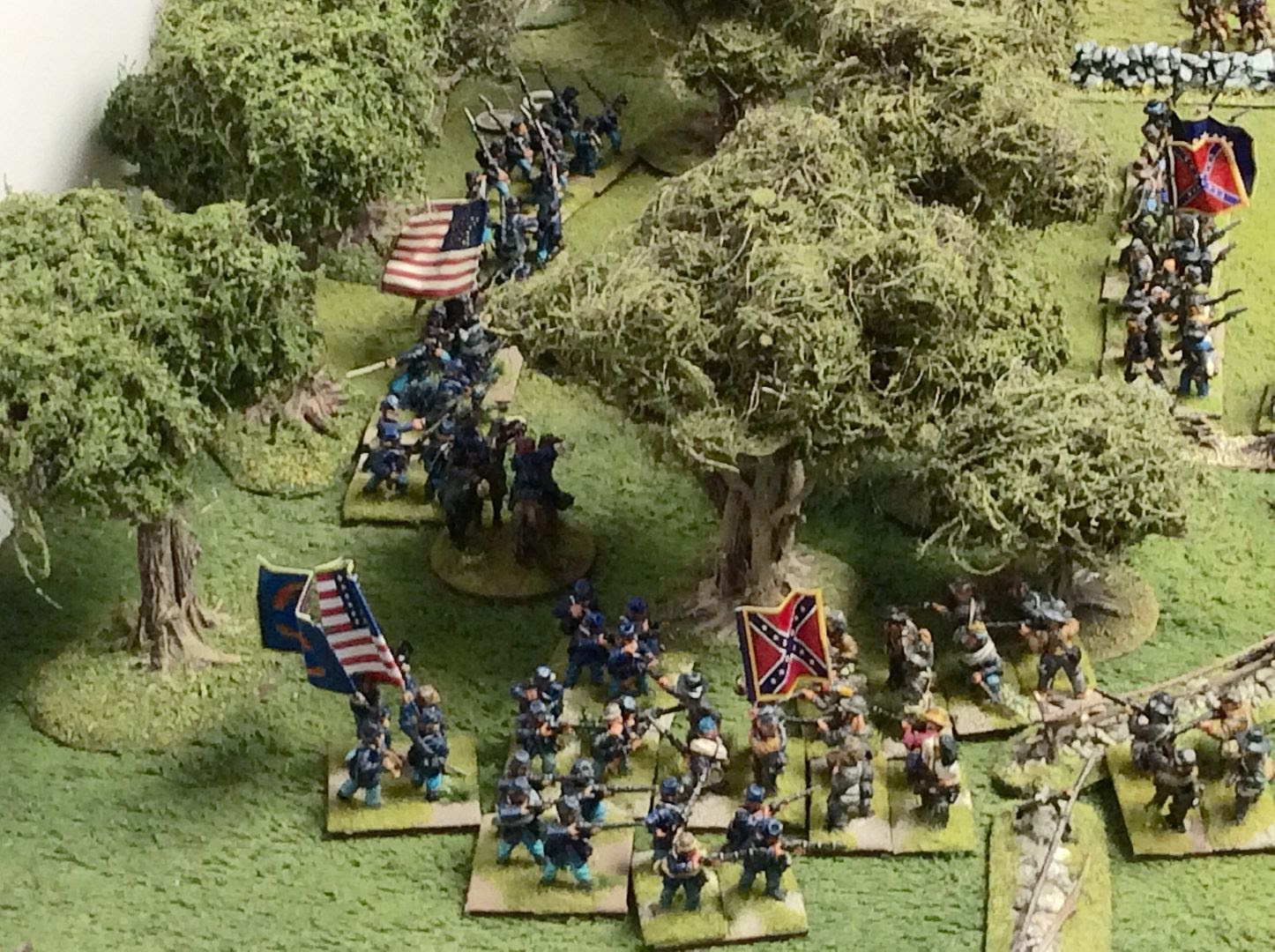 The Union brigade on the left flank was poised to crash out of the dense wood into the Reb flank and turn the tide of the game once more in the Union's favour. At least that was what I planned. Phil had other ideas and sent a regiment successfully against the tail end of the Brigade line. The fight there was bitter and inconclusive for two turns. 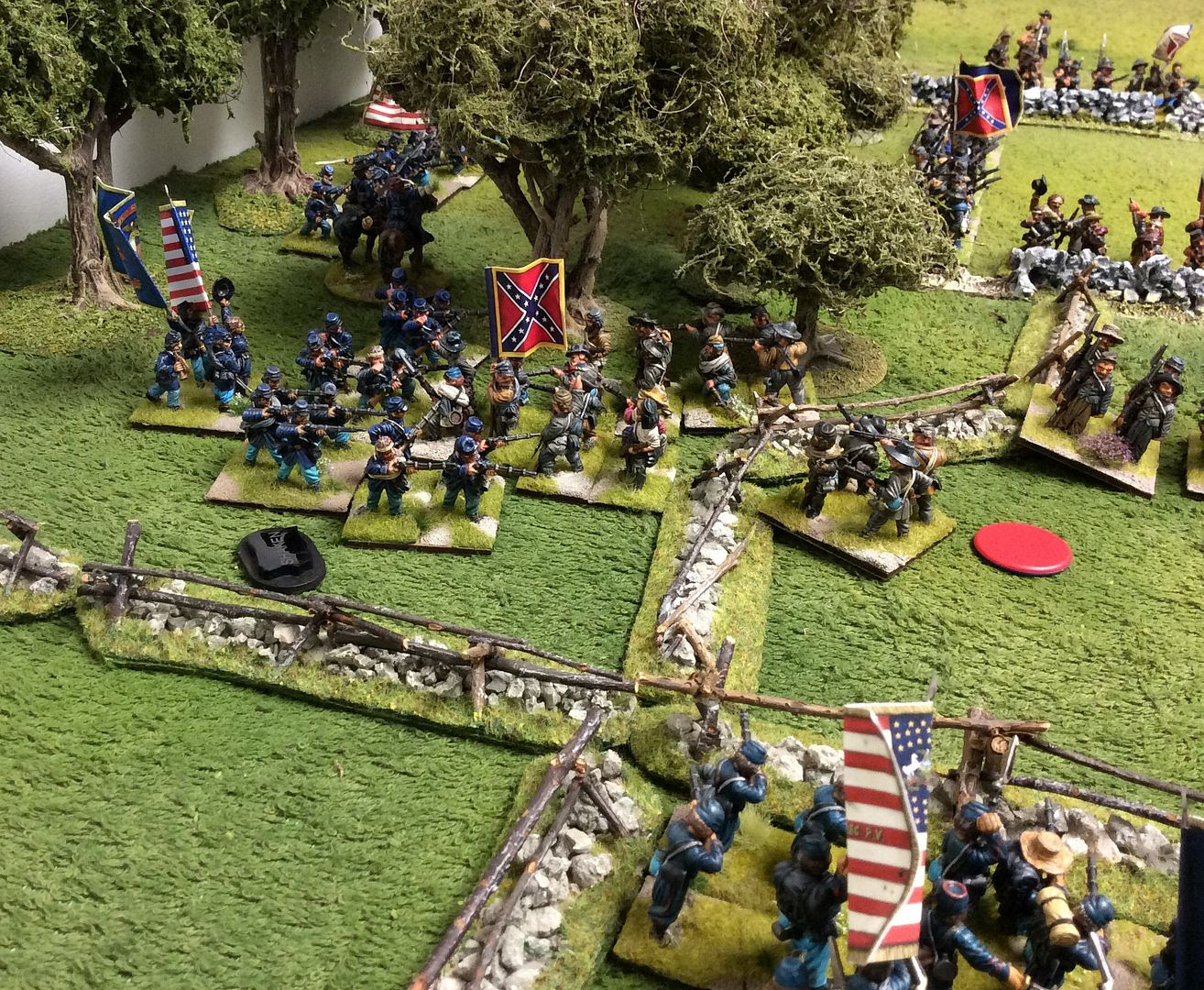 With both sides 'Shaken' the Union came off the worst in the Morale Save roll and another regiment became 'Whipped'! At the same time the 'Confused' rule played against the Union's planned flank attack and they retired 3" further into the woods! Things had turned suddenly against the boys in blue! 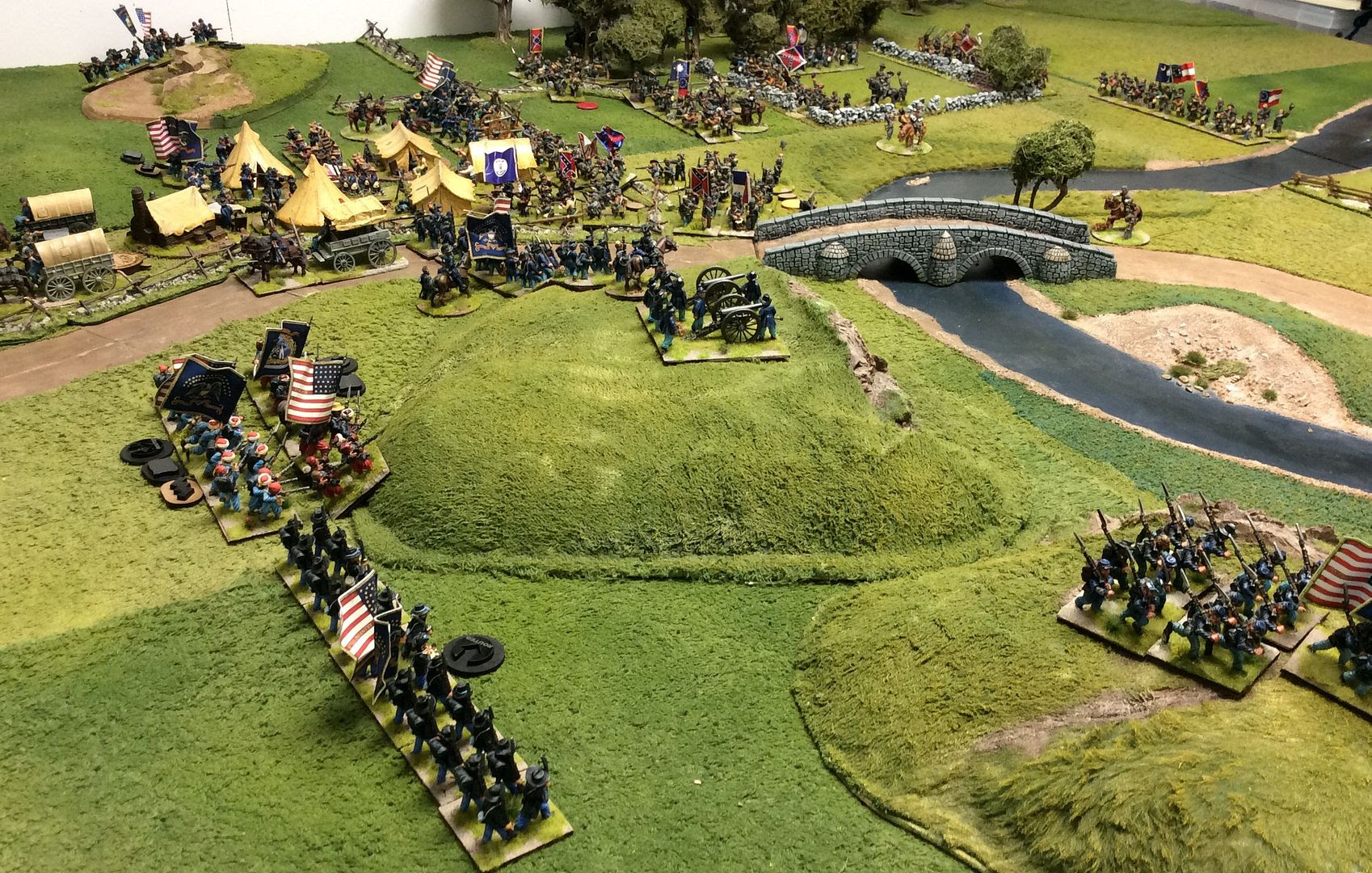 Sadly, at least from my point of view, Turn 9 saw the Union army broken and leaving the field. The Rebs had achieved their objective of seizing the supplies in the Union camp, defeating Useless S Bykleigh along the way. The centre crumpled away under sustained pressure over several moves despite gallant defense by the boys holding the fence line, in the end the punishment meted out proved too much, while the over ambitious flanking attack ultimately failed to turn the game. The Reb diversionary attack on the Union right succeeded despite losses, drawing in the reserve Union brigade which might have bolstered the centre later in the game.
We both felt the game played well and the new rules definitely gave more of an ACW flavour than naked Black Powder rules had. The fortunes of both sides ebbed and flowed throughout with neither side seeing a clear victory until the Union broke. I'd certainly give them another go again! As ever the figures are from my own collection, mostly Dixon Miniatures of course. The bridge is by Hovels and the trees and walls by The Last Valley, while we scratch built the fences in days gone by! Of course, the terrain boards and hills were made for me by Phil as I'm sure you know by now!