The Battle for Bhyklabad Bridge

Earlier this week Phil came over to GHQ and a game for the first time in a good while, or so it seems to me! We had decided to give my Indian Mutiny collection a run out and to see how the game fared using Black Powder instead of our more usual rules ~ my own The Devil's Wind. Phil would command the HEIC/British army and yours truly the Mutineers and their various native allied troops. To reflect the Mutineers lack of higher command ability the C-in-C was rated at 8 and the Brigade Commanders at 7. Mutineer infantry were armed with smoothbore muskets.The Badmash elements we rated Freshly Raised and the Raja of Rhanli's own guards we rated as Steady. For the British/HEIC forces, the C-in-C rated a 10 and the Brigade Commanders were 9's. In addition the Gurkhas rated as Tough Fighters while the European infantry elements were Stubborn and took First Fire also. They were armed with rifled muskets in the case of Europeans, smoothbore muskets for the loyal native troops.The regular Lancers we rated as Marauders, to accompany the lance bonus.
The scenario sees the Mutineers scraping together a force to defend the bridge on the main road to Bhyklabad, which the British/HEIC force must capture intact within 12 turns. To complicate matters the immediate defence of the bridge and its open flank falls to the Raja's guard and the local Badmash elements, with the 'better' Mutineer infantry arriving from the rear. The bridge takes six turns to prepare for demolition and then can be blown by the nearest Mutineer commander passing two successive Command Rolls. The British/HEIC force is divided by the river and so cannot easily find one arm supported by the other. The game proved to be very nip and tuck, with fortune favouring first one side and then the other before a rather sudden collapse of one, but that's getting ahead of ourselves.
Early moves saw the Raja's horse boldly cross the bridge, supported by some mounted hill tribesmen, to engage the enemy. You can see the Raja's Great Gun of Bhyklabad covering the bridge approaches, supported by other Mutineer artillery batteries on the high ground flanking the crossing. Away on the Mutineer left the Badmash and hill tribesmen are surging forward. In the centre the 'better' Mutineer infantry was remarkably unwilling to join the fray in early turns!

The Badmash's bold advance is halted by the Dragoons and Hussars! The hill tribesmen still surge forward and the Raja commits his war elephants to their support. At last the first of the Mutineer infantry joins in the battle, crossing the front of the Great Gun to support the beleaguered Badmash. 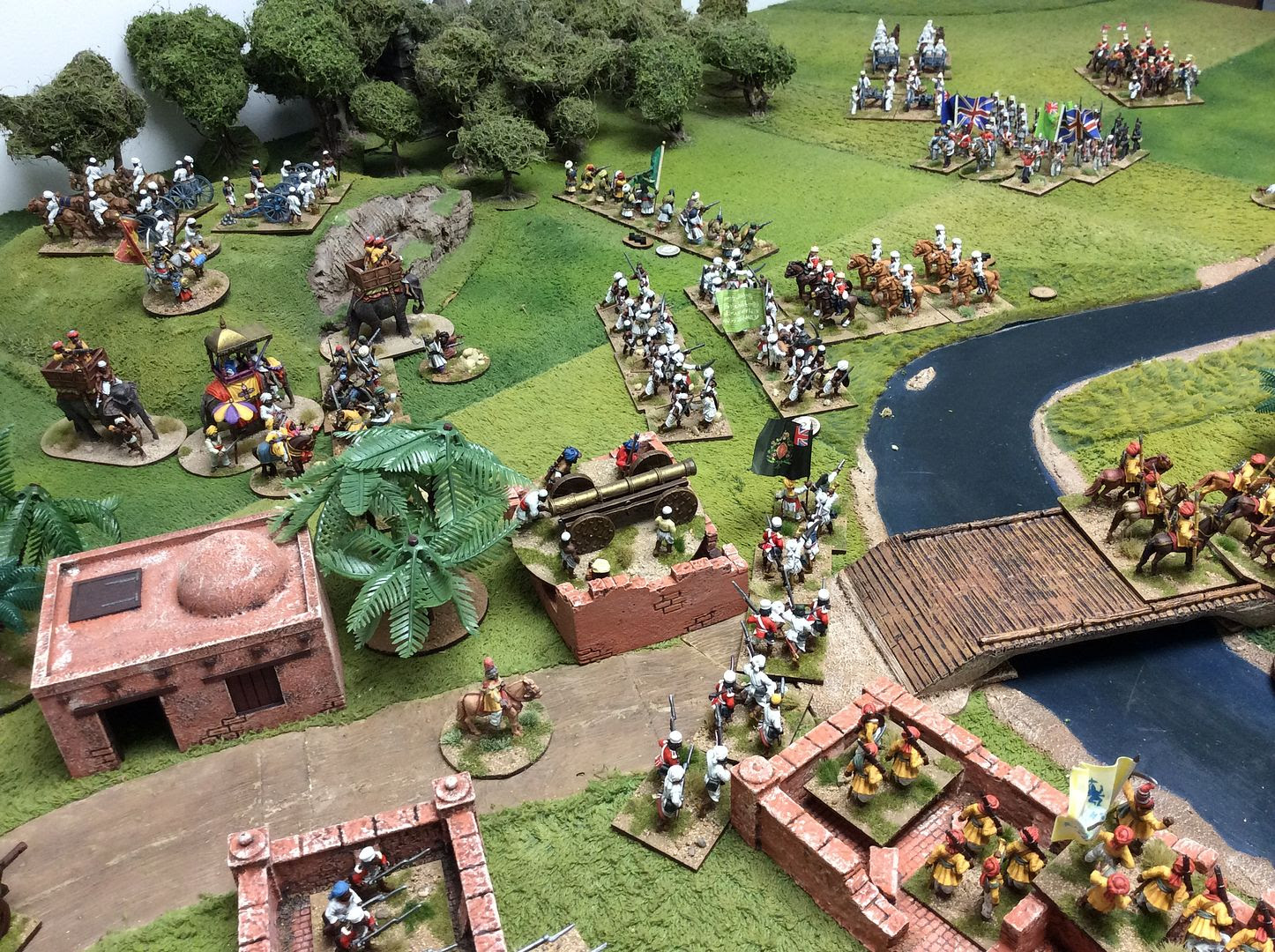 Despite taking casualties the charging Badmash defeat the Dragoons and Hussars, forcing them to fall back. Casualties mount for the hill tribesmen and they become disordered by artillery fire, just as the infantry close with them supported by the Lancers. 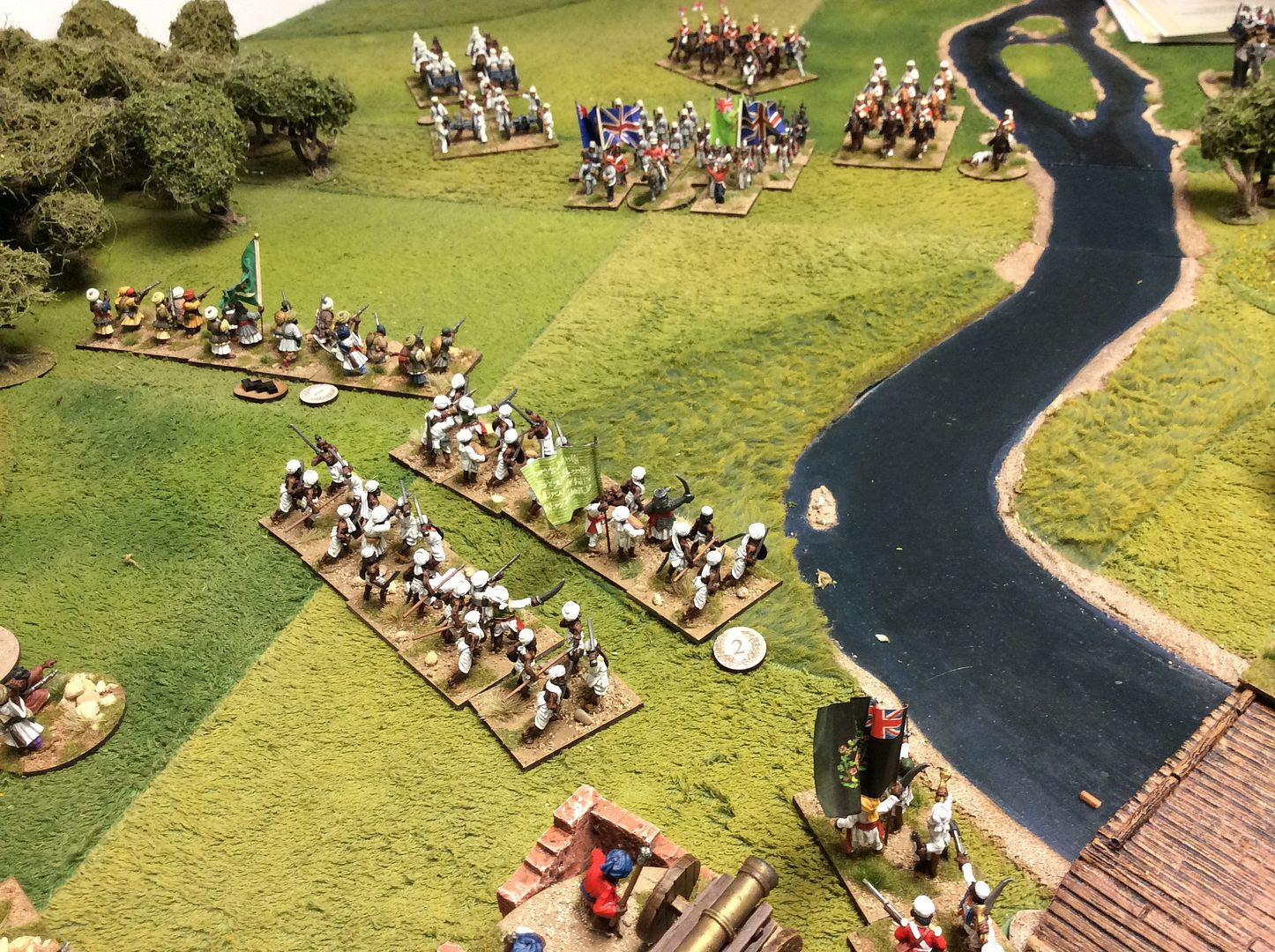 On the opposite flank ominously solid formations of Regular infantry and Neil's 'Blue Caps', with the Gurkhas skirmishing on their right flank, are advancing on the bridge. The Raja's Guard cavalry have been thrown back in disarray so it was up to the mounted hill tribesmen to carry the fight to the ferengi! 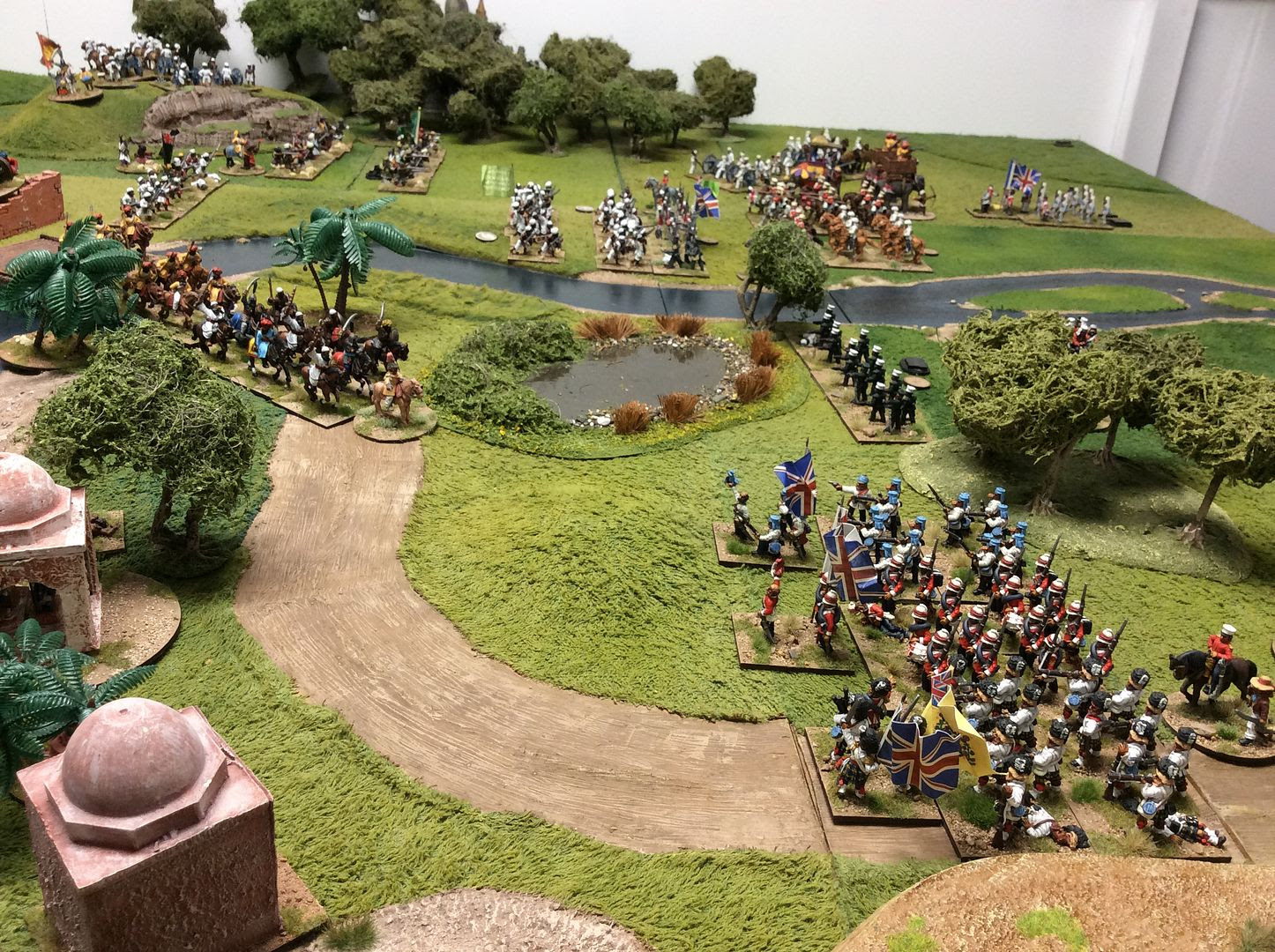 Fighting became a fierce exchange of musketry along the front on the right of the Mutineer position as their desperate commanders threw arriving units into the defensive line and the enemy infantry steadied itself for the inevitable charge across the bridge in the teeth of a storm of shell and shot! On the Mutineer left the war elephants charge the enemy guns ~ quite mad! They are in turn charged by the Dragoons and Hussars and comprehensively beaten! The Mutineers have shown themselves aggressive fighters, willing to take the fight to the enemy, but their losses have inevitably been mounting steadily. Suddenly in Turn 7, with the loss of the war elephants their army is Broken and must flee the field, leaving the bridge intact to allow the victorious enemy to march on towards Bhyklabad!
A grand game, despite the sudden collapse of the Mutineer army. I should have said that they were comprised of six small brigades in a further attempt to mirror the disarray and rivalries amongst their local commanders. With three of these Brigades Broken in turn 7 their army fled the field, forgetting to try to blow the bridge ~ I put that down to excitement myself! As I do the lack of pictures of the end of the game, sorry!
No game here in GHQ now for two weeks. Phil is away on some Greek island for an Autumn break and Jon's situation shows now hope of immediate improvement in game possibilities, so I'm on my own here for a while. Not wanting to waste time I've pressed on painting the Battalion guns for my French in the Wars of the French Revolution project and cleaning up, spraying and basing some VBCW figures from Footloose.
Posted by David at 07:52