The 'Derby Worlds' and the 'Rugby World Cup'

I usually go to Wargames shows with Phil or Jon, as I find I enjoy them more when I have good company, but on this occasion I had to go to Derby Worlds wargames show on my own - Phil was elsewhere and Jon was helping "Roland's Rats" with a 6mm Napoleonic demonstration game at the show. I arrived about 10.50 on the Saturday morning and was really surprised to see a long queue still evident. We usually go on the Sunday when it seems quieter; now I know why we choose Sunday, as the show was humming with folk all day and the traders seemed very busy taking money! As I'd walked along the front of the Exhibition Centre to join the queue I'd noticed the large ACW game in the window: easily identifiable as Gettysburg by the very large Lutheran Seminary prominent on the battlefield. As it turned out it was the only area where the lighting was not 'green' when you took a picture using my iPhone camera, so it forms my only photographic record of the games I saw! But first I decided on some shopping. I even had a list!

The Trent Miniatures I had pre-ordered from Duncan at The Other Partizan and Dan from Wargames Illustrated had kindly brought them along for me. They contained some 'extras' as a surprise, notably a Hungarian standard bearer wearing the early casque helmet and three fine French Elite company figures kneeling in a mix of firing and loading poses. Otherwise they were the three Austrian Dragoons I needed to bring the regiment up to strength; a unit of eight Hompesch Mounted Rifles, as a variant for the British Light Cavalry in my Flanders force; the Hungarian drummers and officers I needed to complete the two units I bought earlier in the year; and finally, some Austrian drummers and fifers, to make a small drum and fife band to inspire the troops into battle! From Foundry I got a pack of Late Roman cavalry to complete my new command base for Pompus Maximus. I got a great discount too, so 'Thanks!' Marcus. From Dave Thomas I got two packs of Perry Miniatures, Generals and ADCs, to make a couple of command vignettes, inspired by ones I'd seen on a fellow enthusiast's Blog! From Warbases some pill bases for the cavalry and a Hen House, which turned out to be a dog kennel when I got home! More of that later! And finally, from Great Escape Games some more Gamers' Tufts!
Turning then to the games I enjoyed a leisurely meander around and the occasional chat with chaps I knew involved with the games' presentation. There was a fine Waterloo themed game in 28mm which I admired, especially the buildings ~ made by Nick Buxby I believe and now cast up by Caliver Books I think. 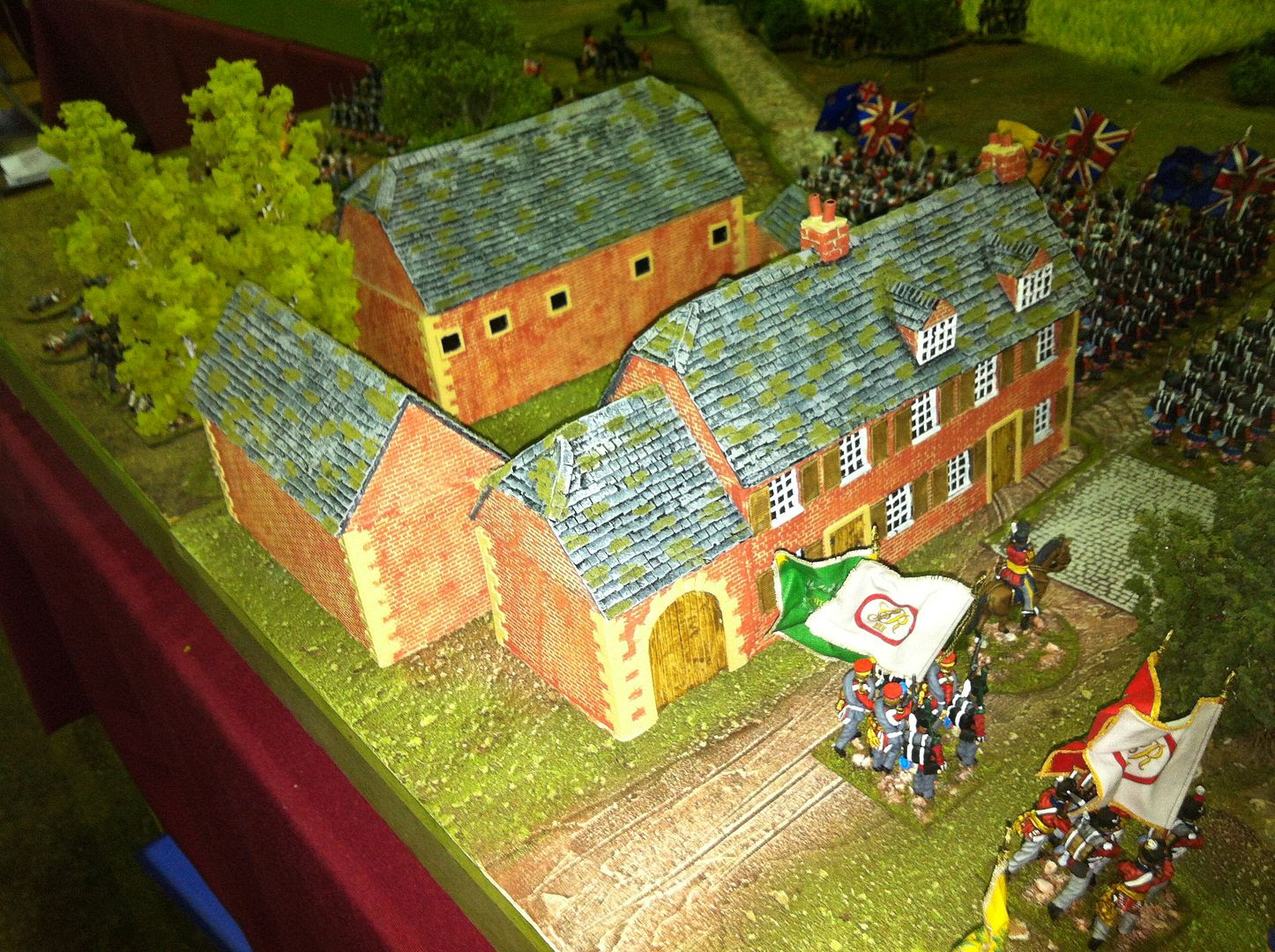 Then, back into the light to explore the Gettysburg game I'd mentioned that I'd admired on the way in. In fact not one game, but two! A 10mm{?} game/display depicting Pickett's Charge to judge by the lines of advancing Rebs, as well as the 28mm monster table! 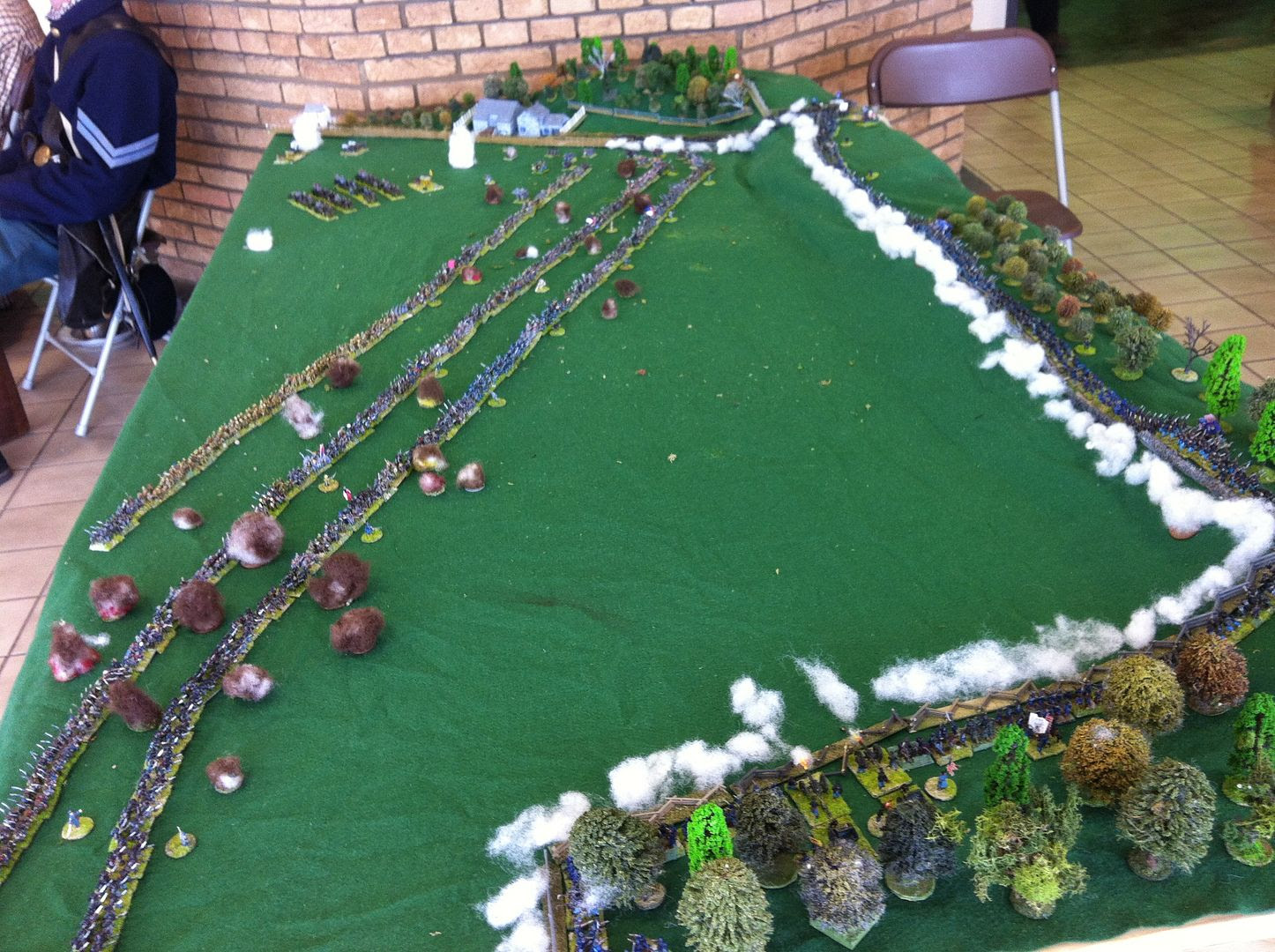 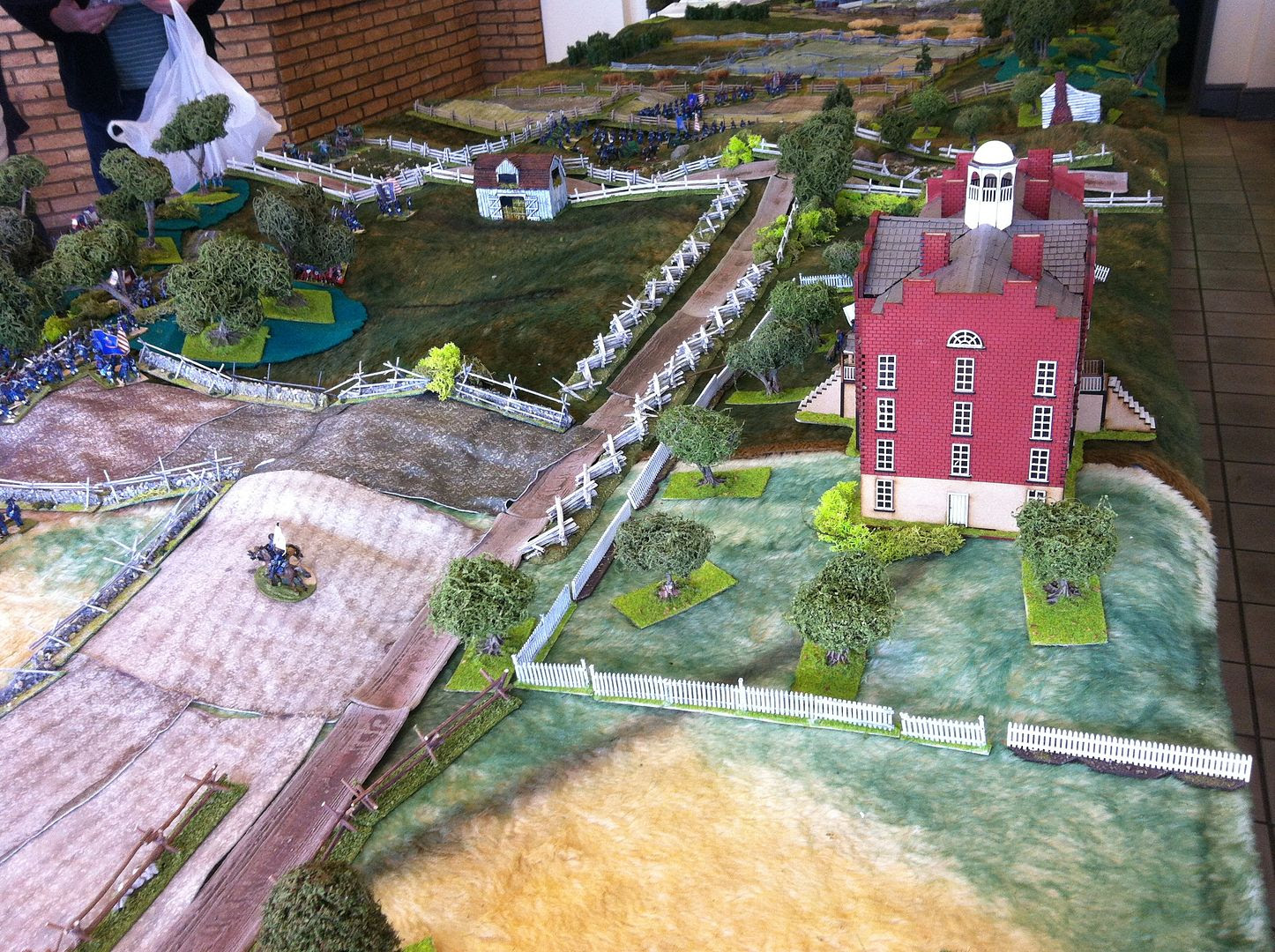 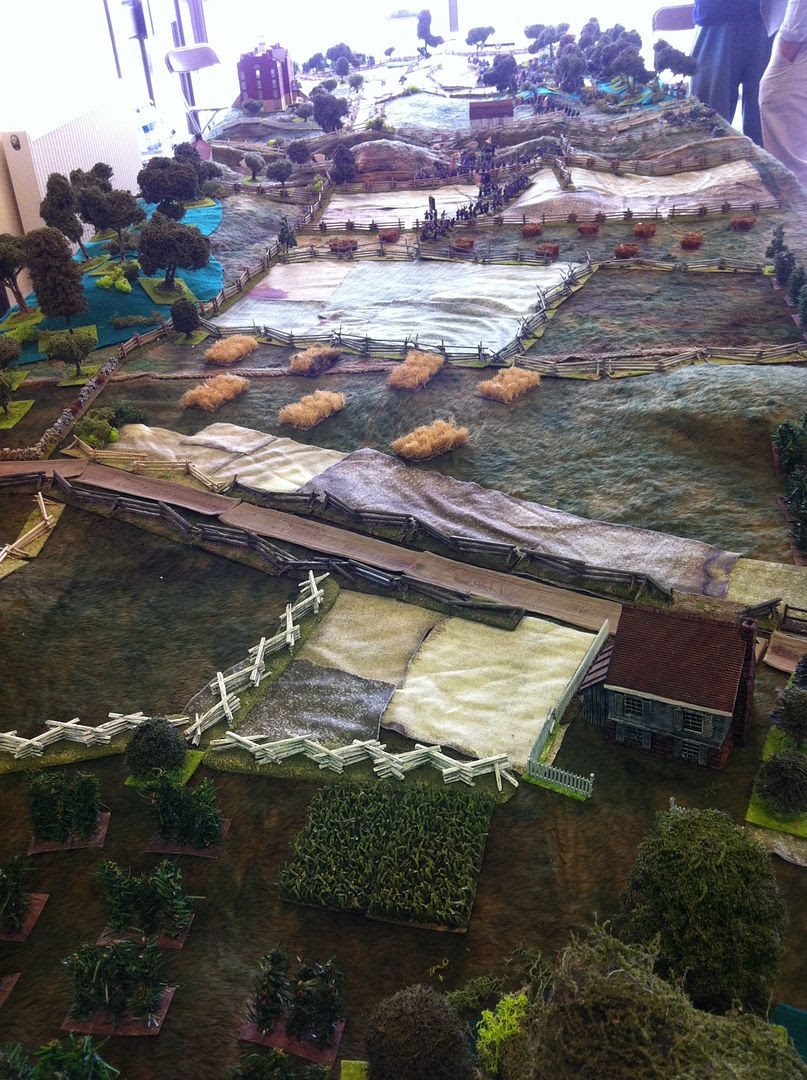 Sadly that's all the game pictures that were even marginally presentable! The rest were so 'green' they made me feel nauseous just to look at, so I deleted them rather than inflict them on the unwary visitor! I often find now that lighting at wargames shows leaves much to be desired ~ Salute, Wargamer and Partizans of old spring readily to mind!
I almost forgot: wandering the Flea Market in the afternoon I came across this ~ 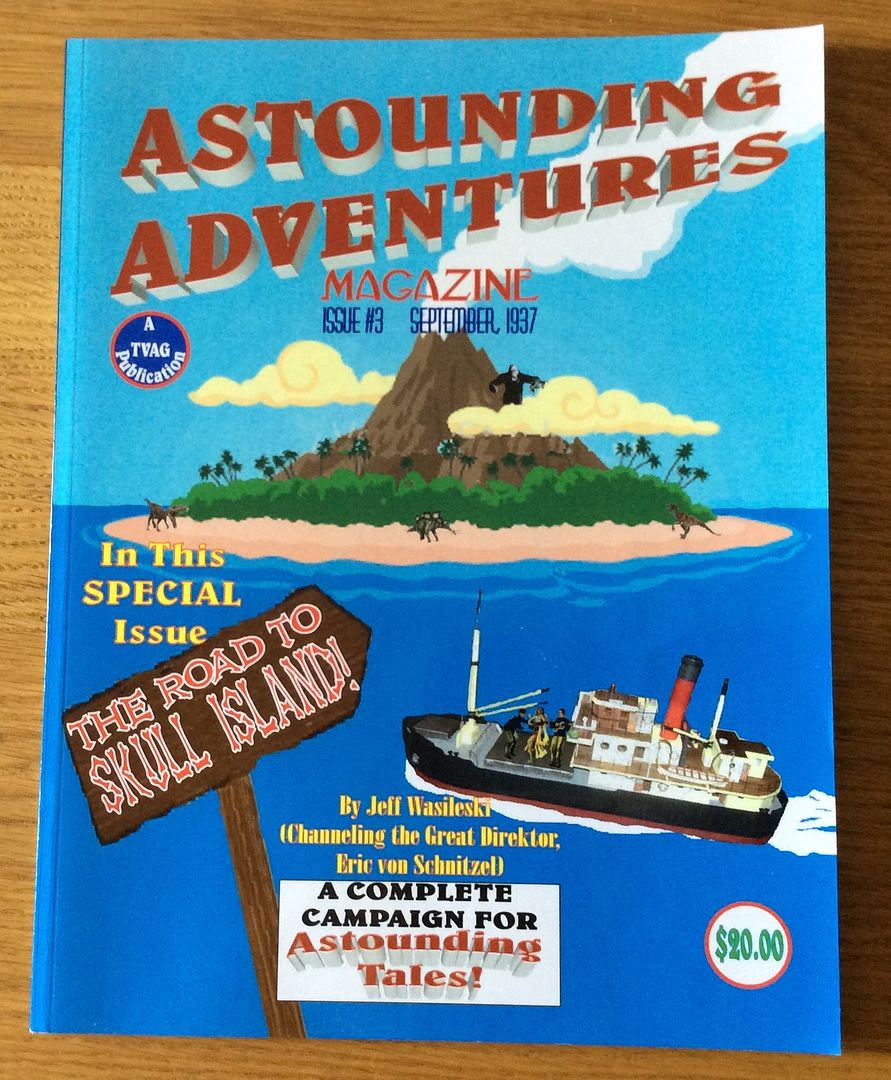 And only £5.00! A bargain as it contains not only all the scenarios for the game but also the additional rules for 'Mass Combat' which I can use in our Blandings/Zeelowe 1940/F&IW games instead of my 'house rules'. I just need to light on Issue Number 2 now! All in all a great day out! I met some good friends, saw some good games and spent some money on new stuff for the hobby! Pretty much perfect!
Fast forward from Saturday to Tuesday and you find Jon and I at the King Power Stadium in Leicester for the Rugby World Cup. I'd mentioned to Jon that I'd seen World Cup soccer and Test Match cricket, but never World Cup rugby. He got two tickets for the Canada v Romania and so we braved the monsoon between Wolverhampton and Leicester to arrive in good time for the match, and even park close to the stadium! 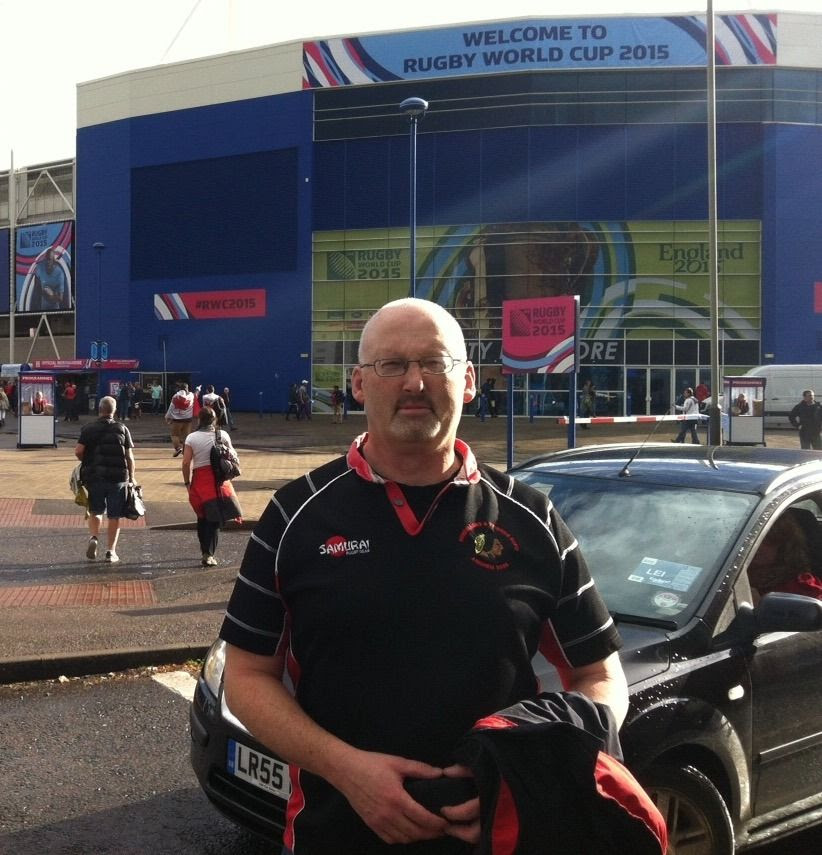 As you'll see, we arrived in the sun! The monsoon was just all the way there! It was all very well organised, with volunteers to steer you on your way, and we were soon inside the stadium and finding our seats. But first, the obligatory photo of Jon with 'the cup' ~ 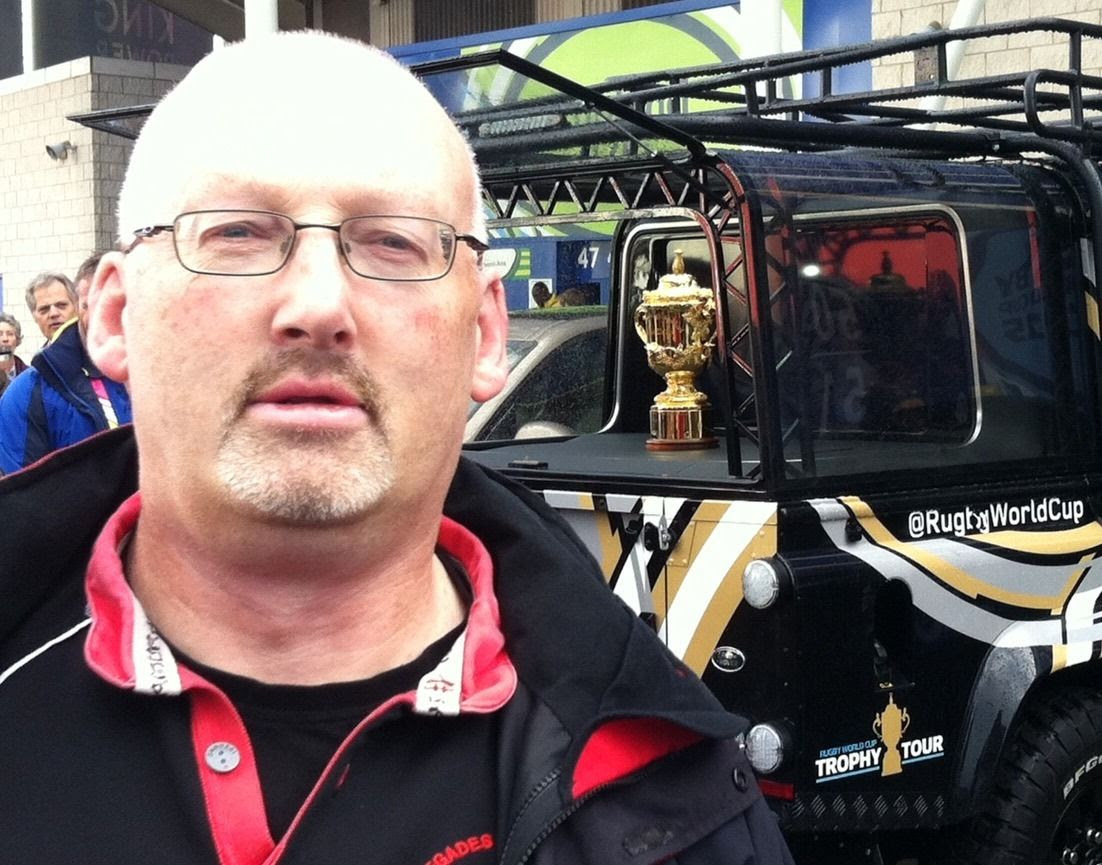 As we are 'Englishmen' through and through we decided we would support Canada, although that didn't run to learning the words to the national anthem! 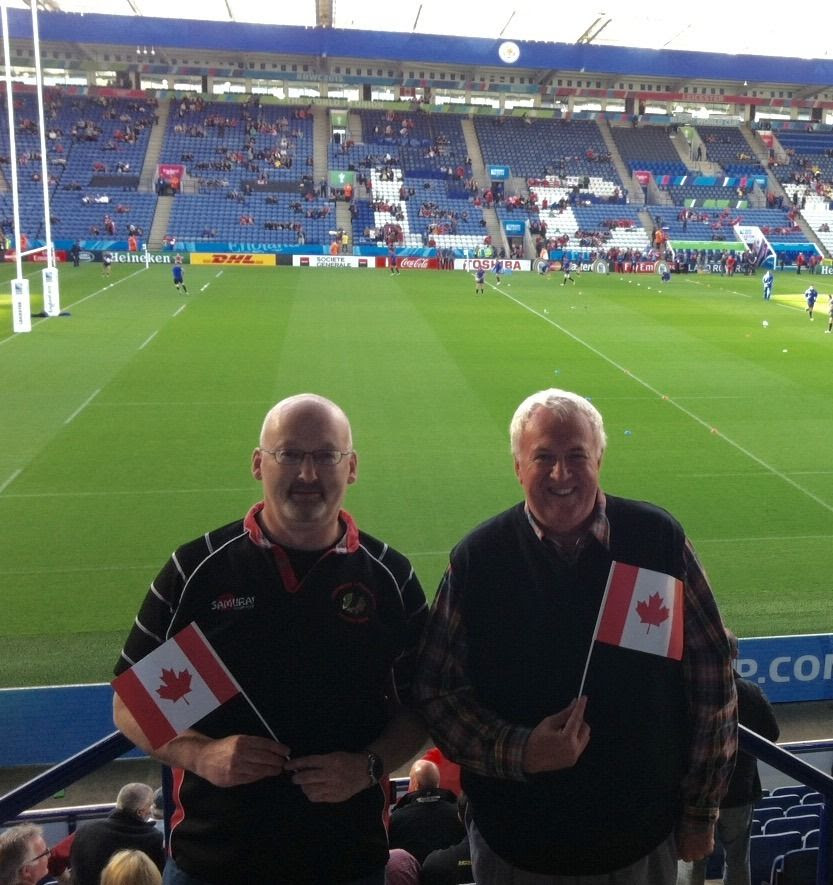 We had a great time at the match, there was some good play by both sides at times, and the Romanians finally came back from 0-15 down to win with a breathtaking penalty kick with less than two minutes to go 17-15! A couple of shots to finish: the anthems before kick off and action from a line out! The Canadian number 2 I christened Gimli, as he was dwarfed by the other forwards and sported a magnificent beard! 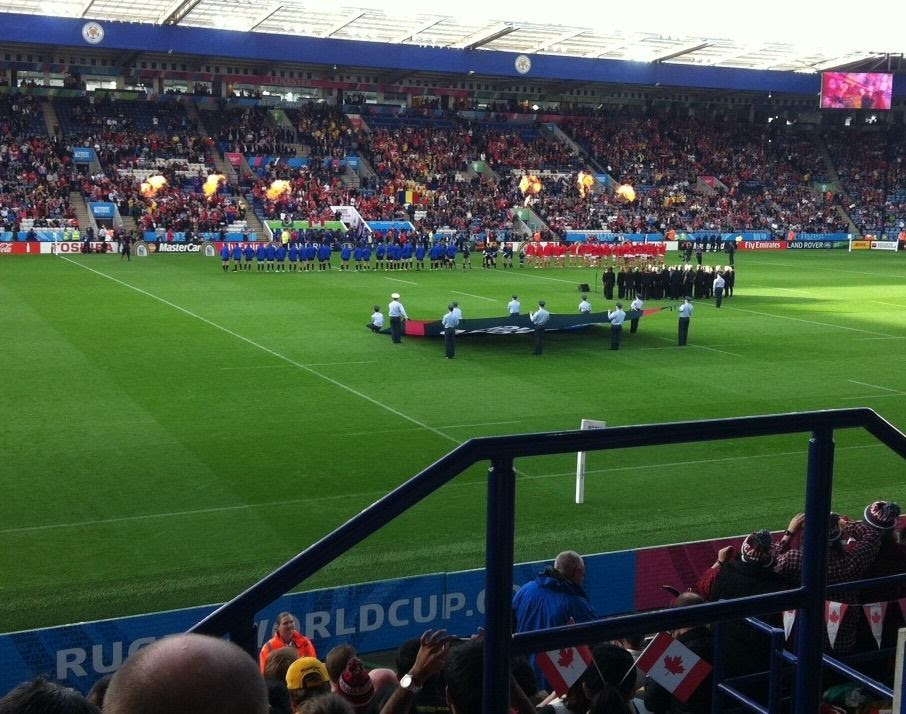 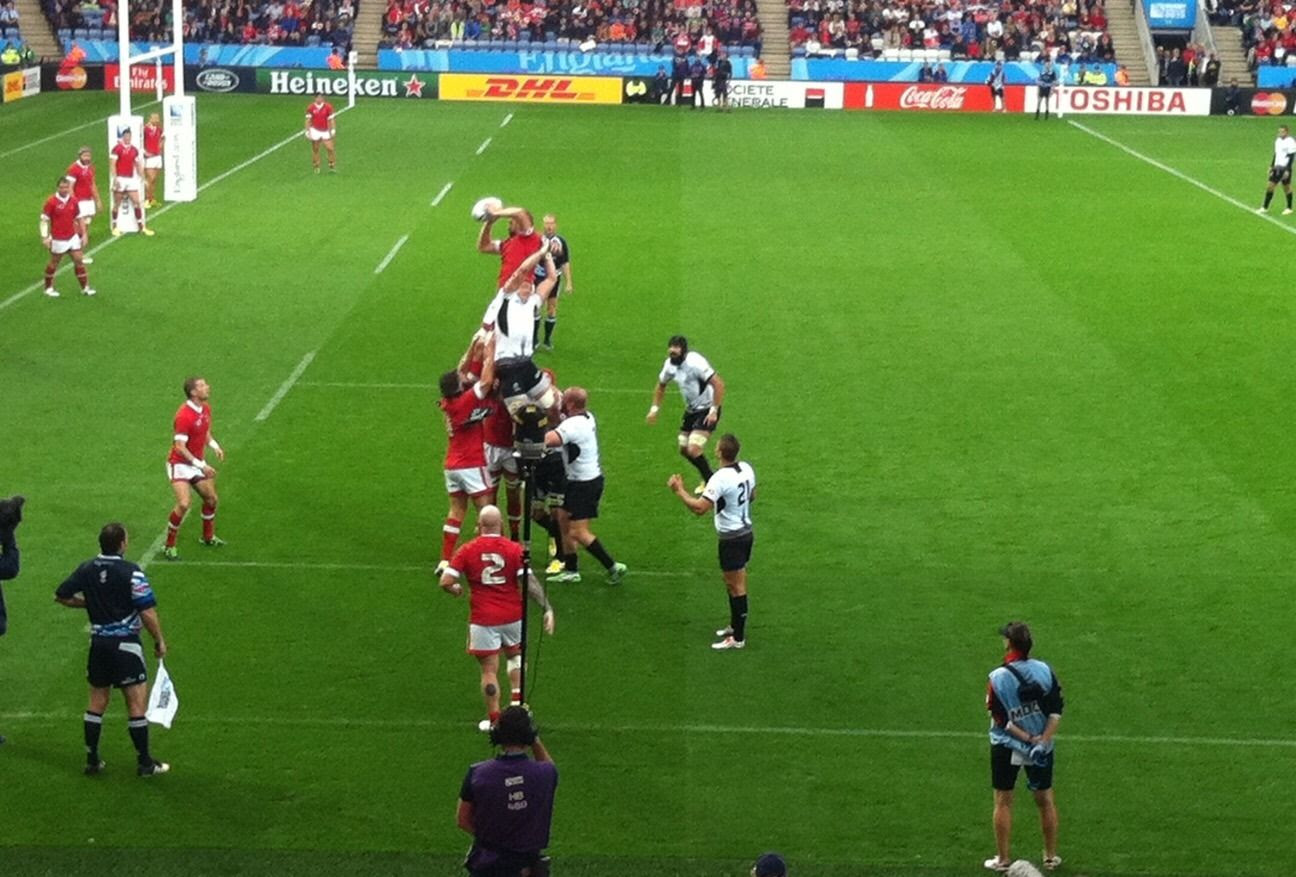 As I said, a good game and a great experience I can mark off from my bucket list! Thanks Jon! I'd certainly go again if I had the chance! Now, back to wargaming and part two of our mega ACW game tomorrow!
Posted by David at 04:46