Earlier this month Phil and I travelled over to Wargames Illustrated's Offices near Nottingham to spend a day refighting the combat around Devil's Den on 2 July 1863 during the momentous Battle of Gettysburg. For a number of years now Wargames Illustrated have staged a large display game at the Salute show in London, featuring beautiful handmade terrain by the hobby's leading exponents. For this year's game they have chosen to depict the fighting on the Union's left flank, around Devil's Den and the Round Tops. The terrain boards were made by David of TMTerrain and will be on display this year at both Salute and Historicon. To accompany the Salute event WI will have special features on the terrain and accounts of refights of aspects of the fighting which have been played out and photographed at WI HQ. I was invited to umpire and then write up the Devil's Den action, using my own Bull Run to Gettysburg rules published by Wargames Foundry. Dan has kindly provided me with a disc of photos he took during the game; so, without further ado...Devil's Den awaits!

We all had a great time refighting the action on splendid terrain! The game lasted seven moves before I had to break it gently to Dan that he had only come second that day, despite fighting heroically. Look out for the WI Salute special for a full blow by blow account of the game. If you are able to attend either Salute or Historicon then make a point of seeing the whole table featuring the iconic action round Little Round Top as well as the fight for Devil's Den. If you can't make the shows, then look out for WI with full reports and many splendid photos of the action.
Posted by David at 12:28 5 comments:

At Vapnartak in early February I purchased a couple more Battleflag MDF Old West buildings: the Attorney's Office and the Newspaper Office, though I have other plans for the latter building in due course. To take a break from painting figures for my new Samurai game I decided to spend a couple of days making up and furnishing the Attorney's Office. As one picture is worth a thousand words, here's the result ~ 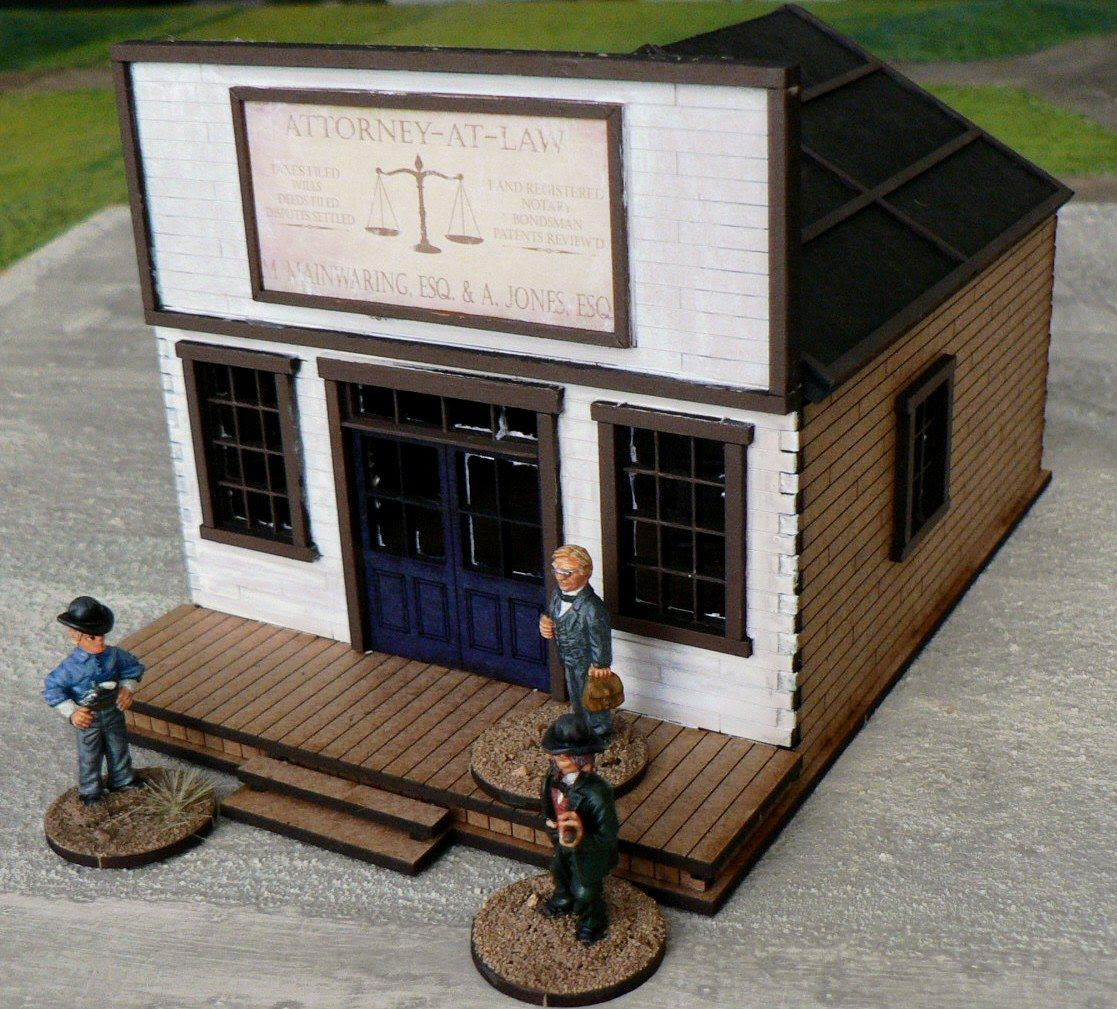 As ever the ink wash is restricted to the street front of the building. 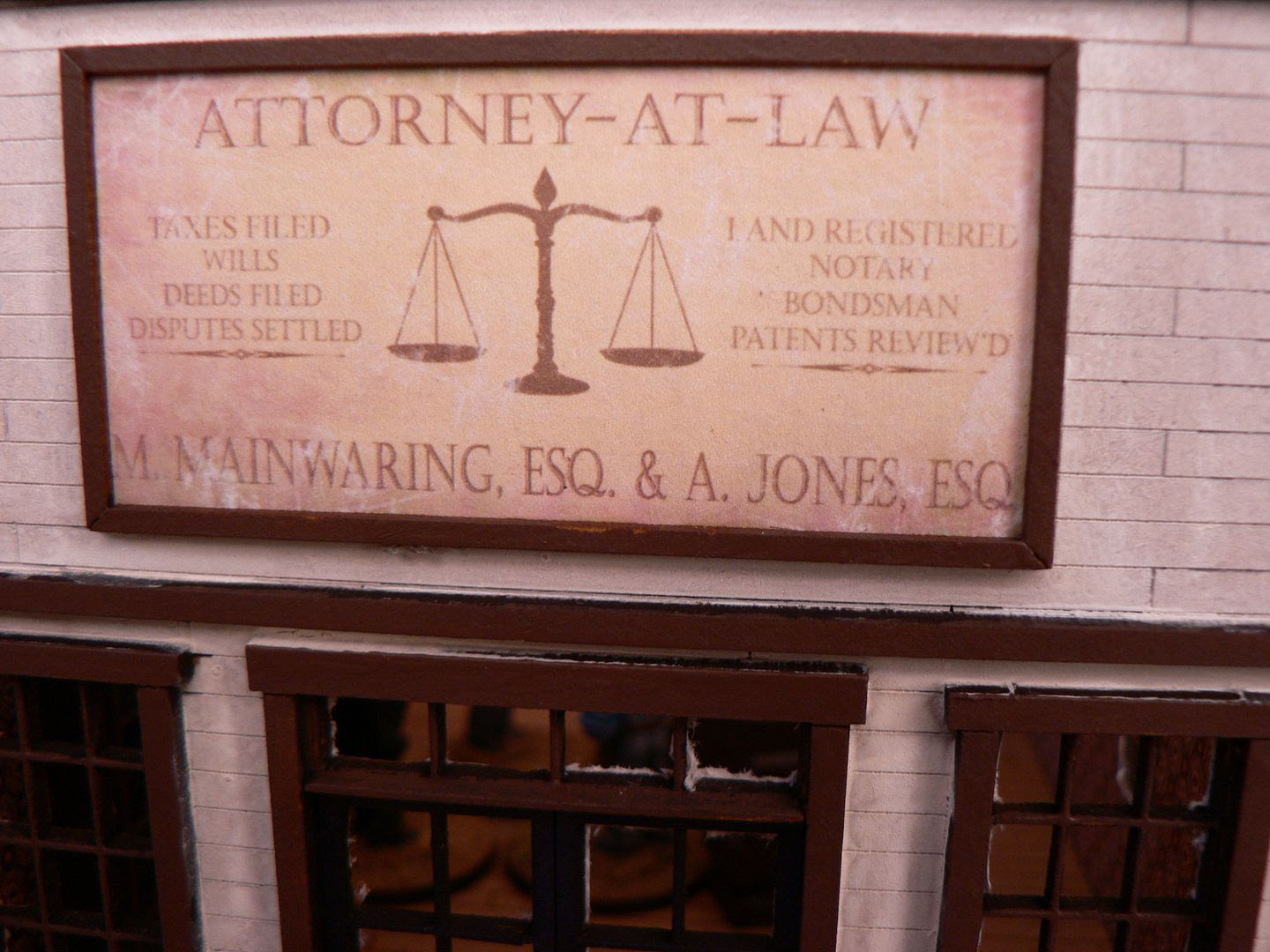 The sign comes with the kit. Its churlish to complain, but I'd have liked a different pair of names myself... 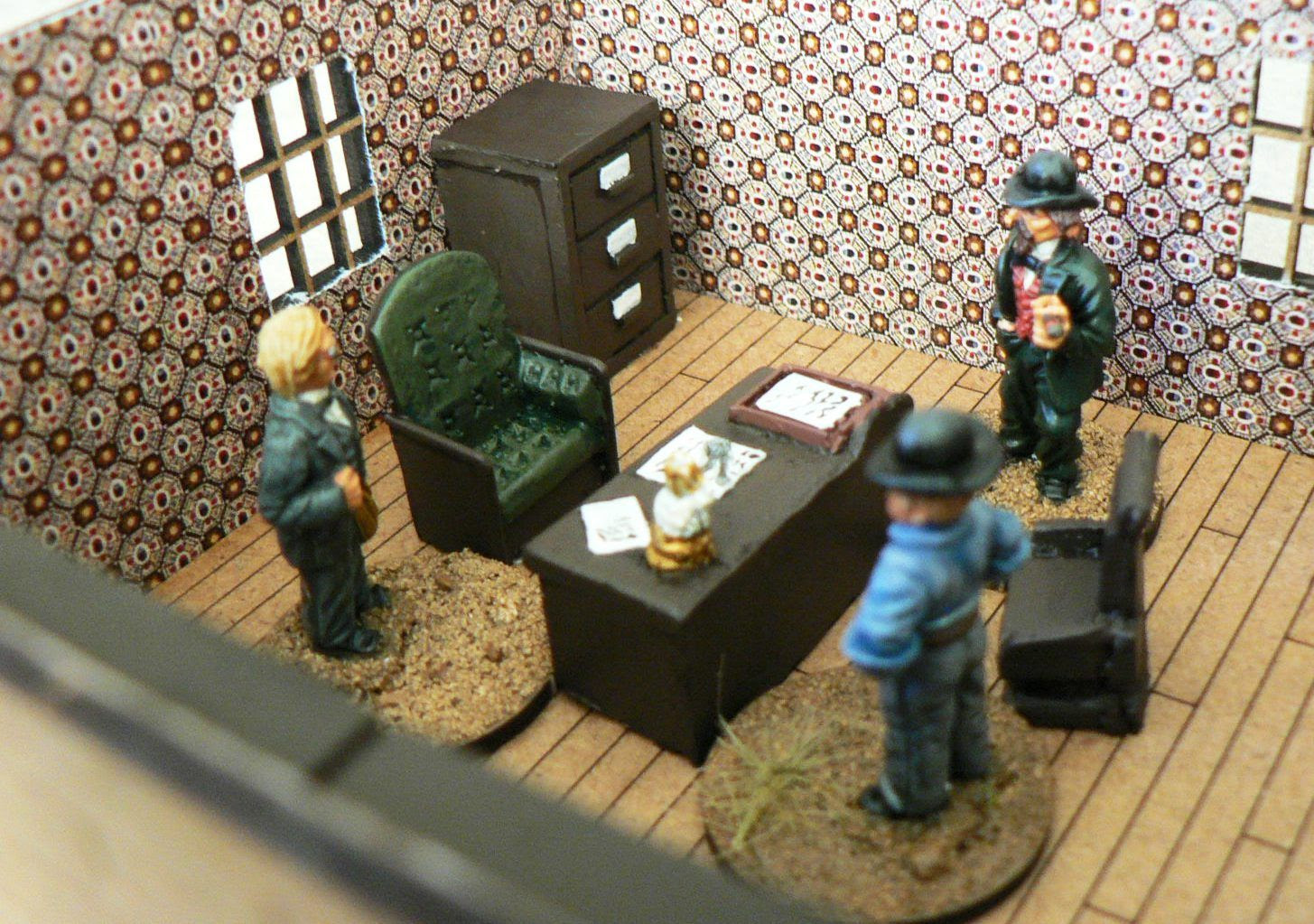 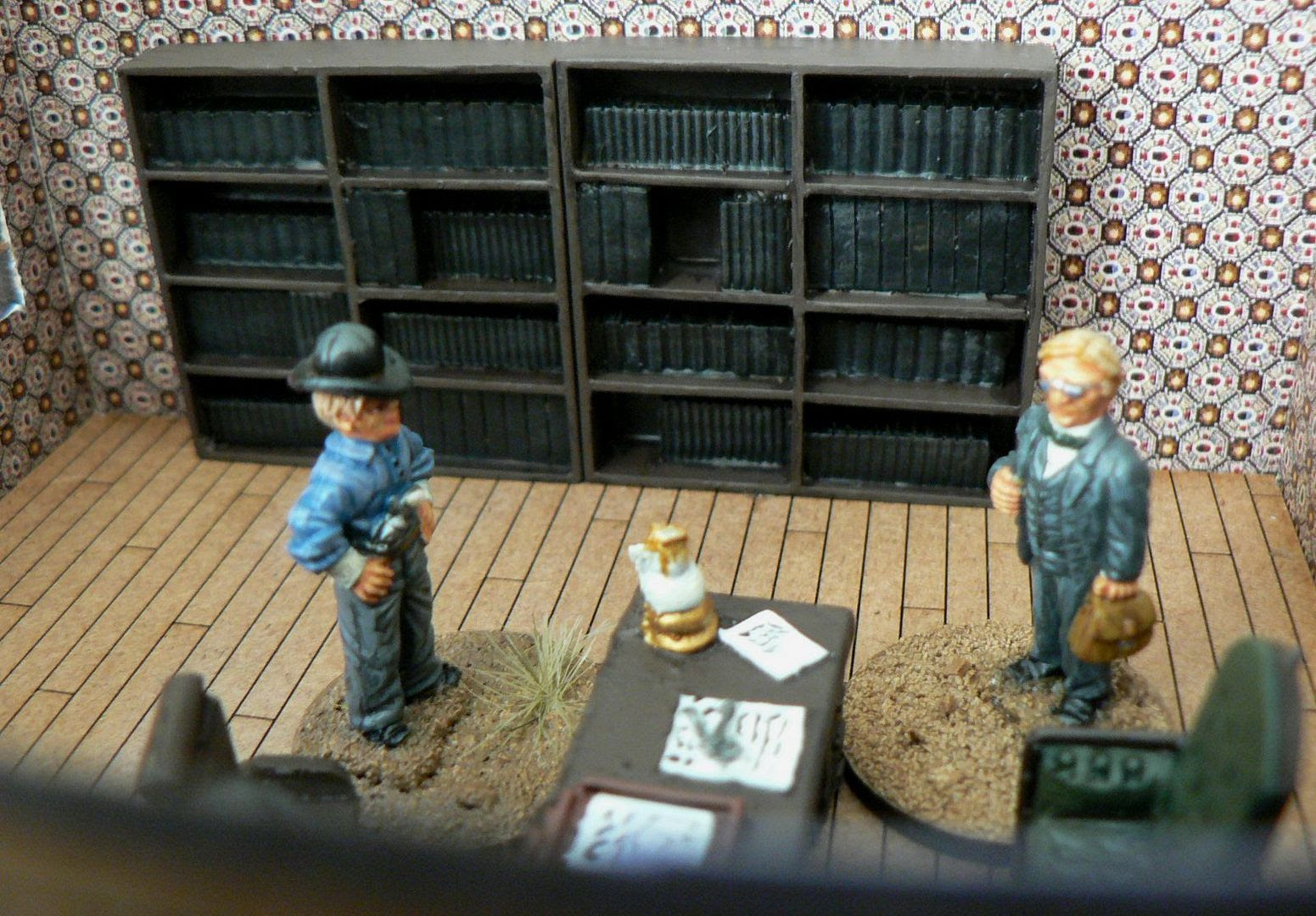 Having papered the insides of my Liberty Bell Hotel {see earlier post} I decided to bring some Eastern culture to the Old West with this building too ~ bound to impress the locals! The paper is a download from a free Dolls' House site, reduced to size. The furniture is from Frontline's resin ranges~in this case from the Sheriff's Office and the Library. 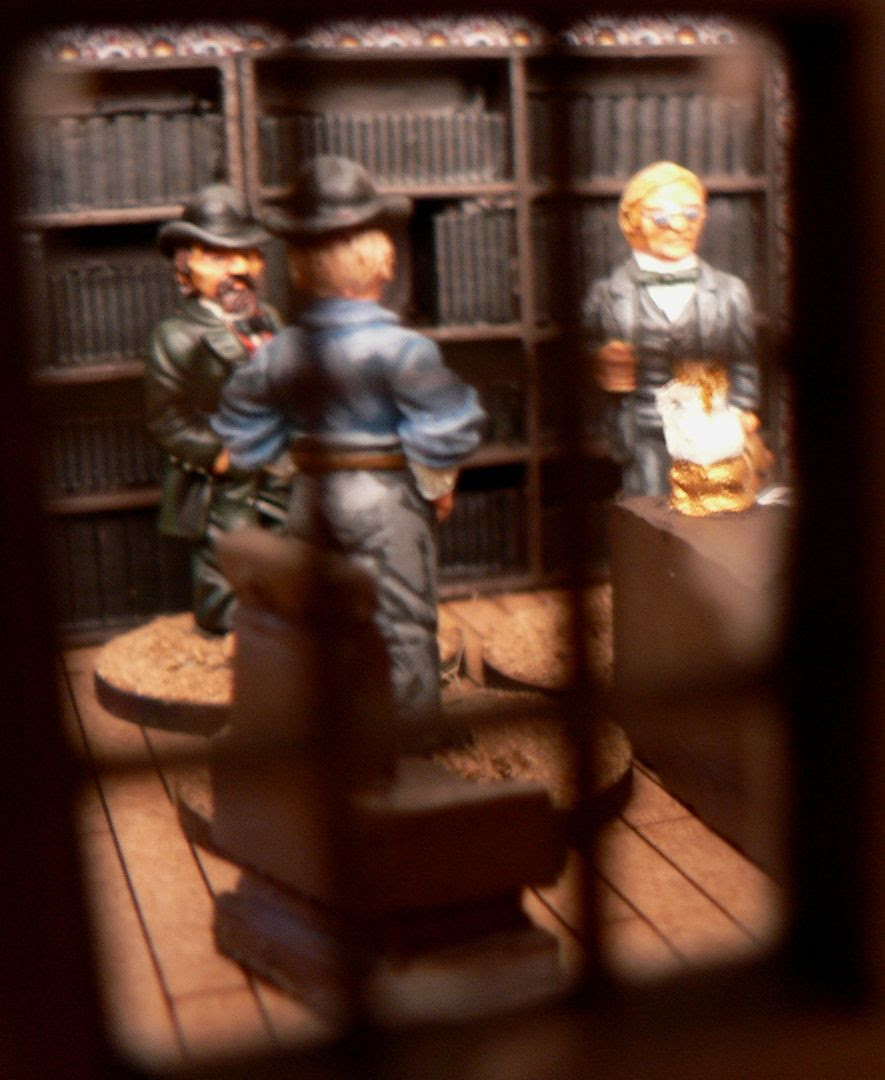 No doubt many underhanded deals will be done in the seclusion of this office; only time will tell...


I hope folk have a minute to comment on this post, or any other for that matter. I'm not really one for controversy, preferring to keep my wilder opinions for myself and my close friends, but I do try to say what I get up to here in GHQ and beyond, perhaps to encourage other geriatric gamers like myself if nothing else...

The Battle of Walton Hall

After a recent highly amusing foray into the 'VBCW', it was time for a return to the 'proper' Civil War of the C17th! A battle staged here in GHQ in our ongoing campaign set in C17th 'Imagination'Staffordshire; peopled by that stout Parliamentarian Obadiah Bykleigh and his sworn enemies, the villainous Sir Marmaduke 'Gaylord' Robinson and the venerable Sir John Whyte of Walton Hall. Taking advantage of Sir John's absence attending on His Majesty, the forces of' Right and Justice' have occupied Walton Hall and garrisoned it for Parliament. 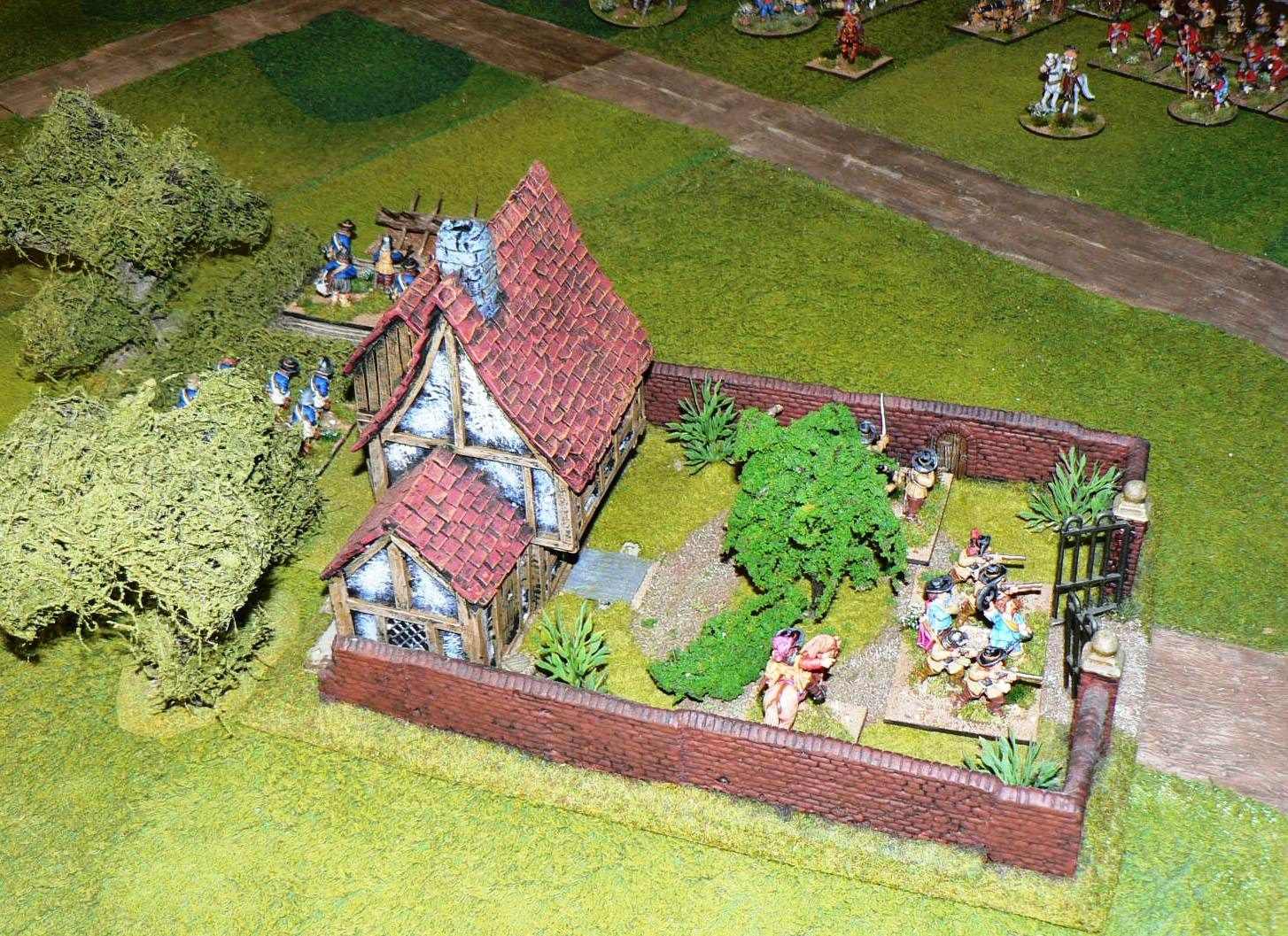 Rushing from the King's presence, Sir John gathers what forces he can to retake the hall... 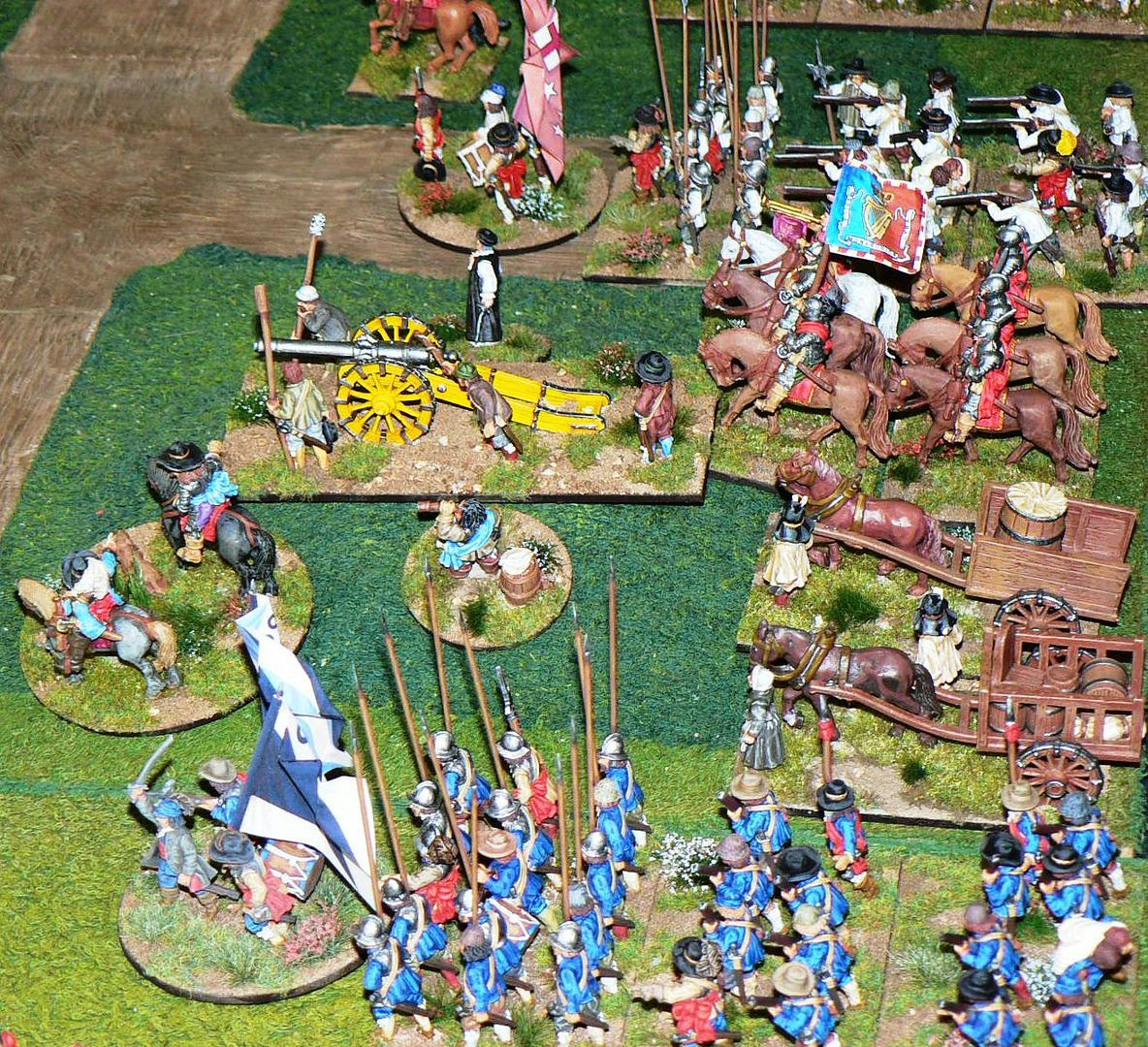 ...only to find that Parliament has gathered an army thereabouts to thwart his plans. 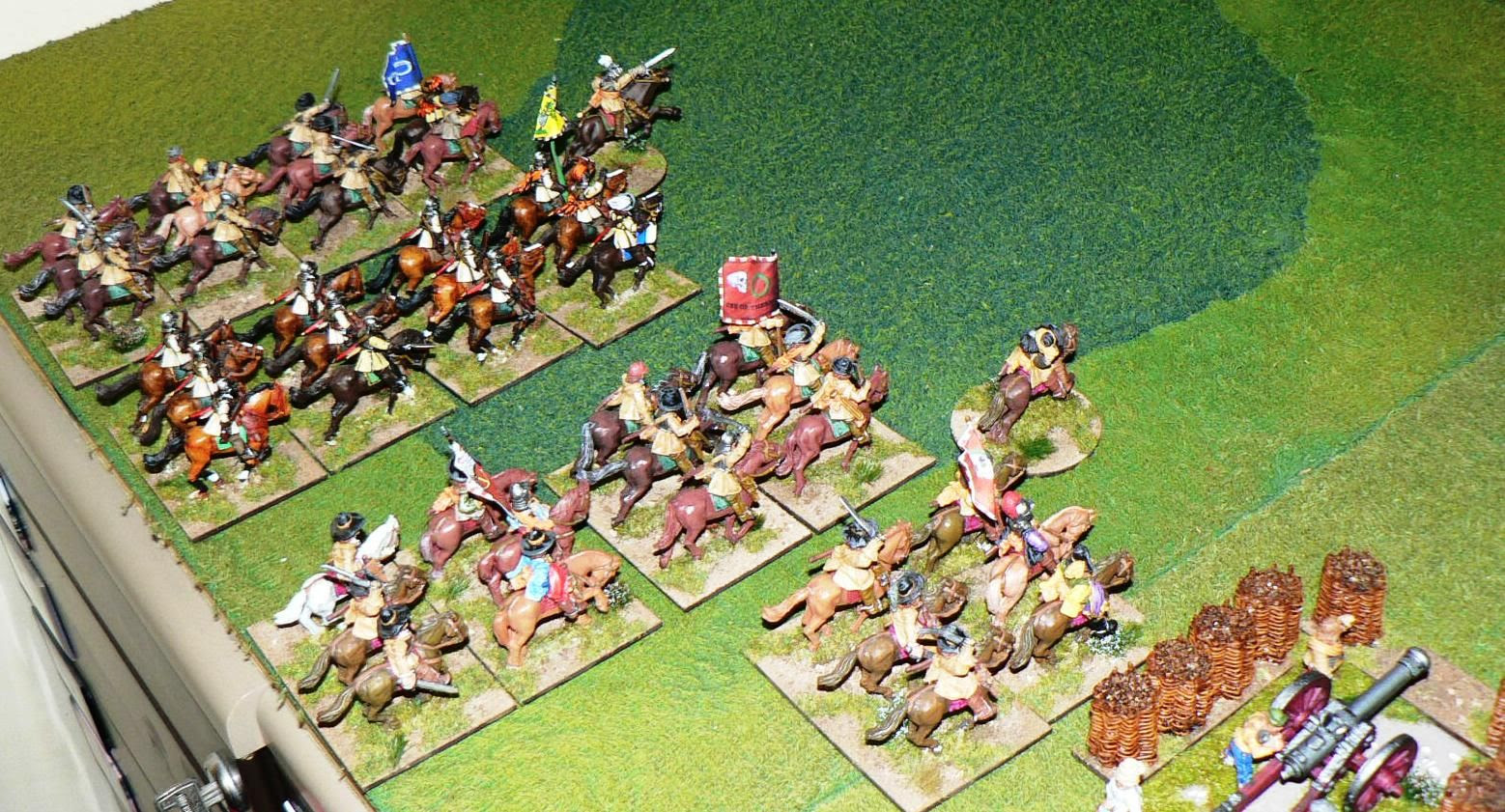 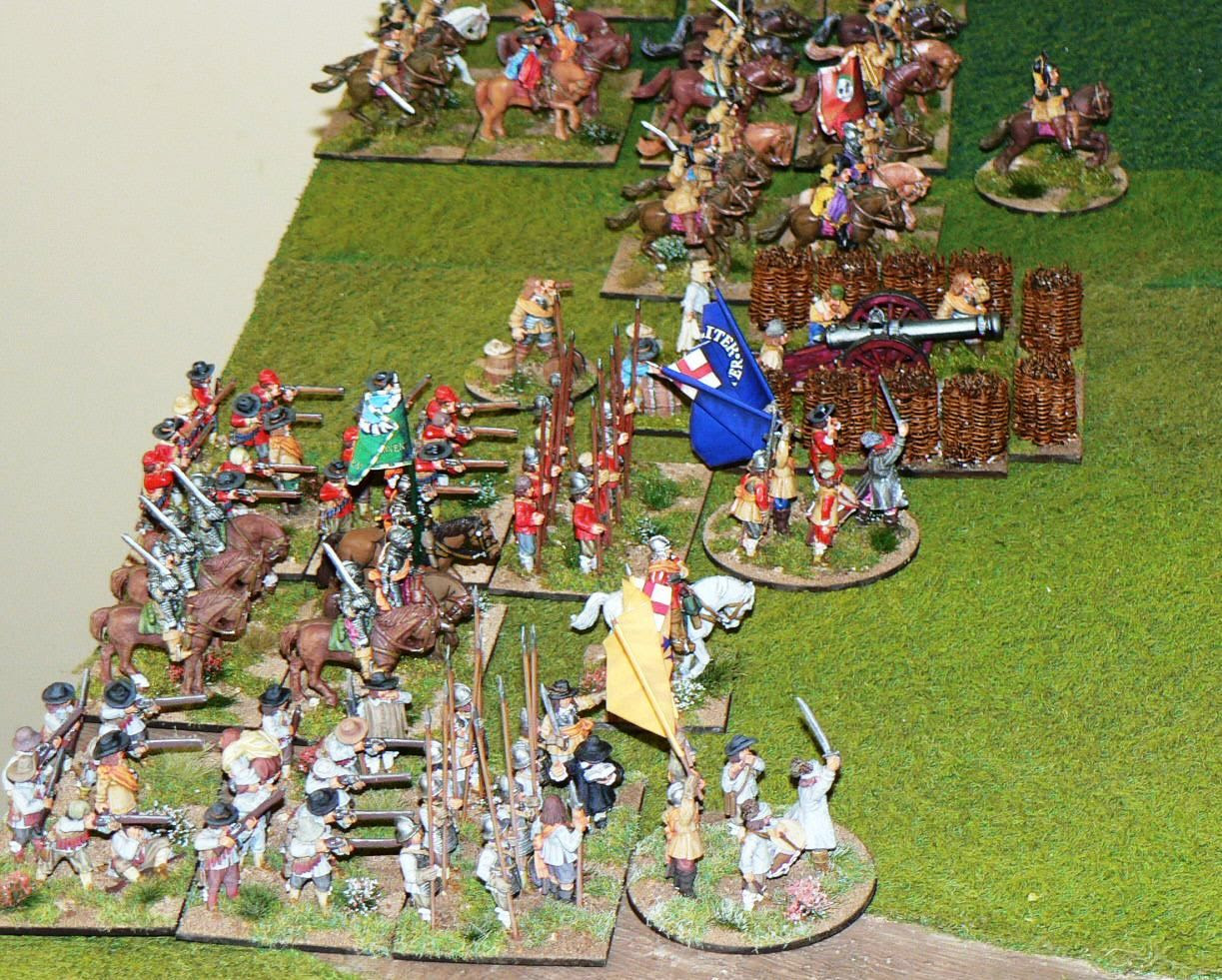 Fierce fighting took place around the Hall, with Sir John's men unable to force the Parliamentarians out, while over on the other flank a swirling mass of horse fought several vicious and prolonged melees which eventually saw the Royalist Horse bested. In the centre the Foote were indecisive, a number of failed Fighting Effectiveness checks holding up the Royalist advance, while Parliamentary Foote and Dragoons did fearful damage with volleys of fire. 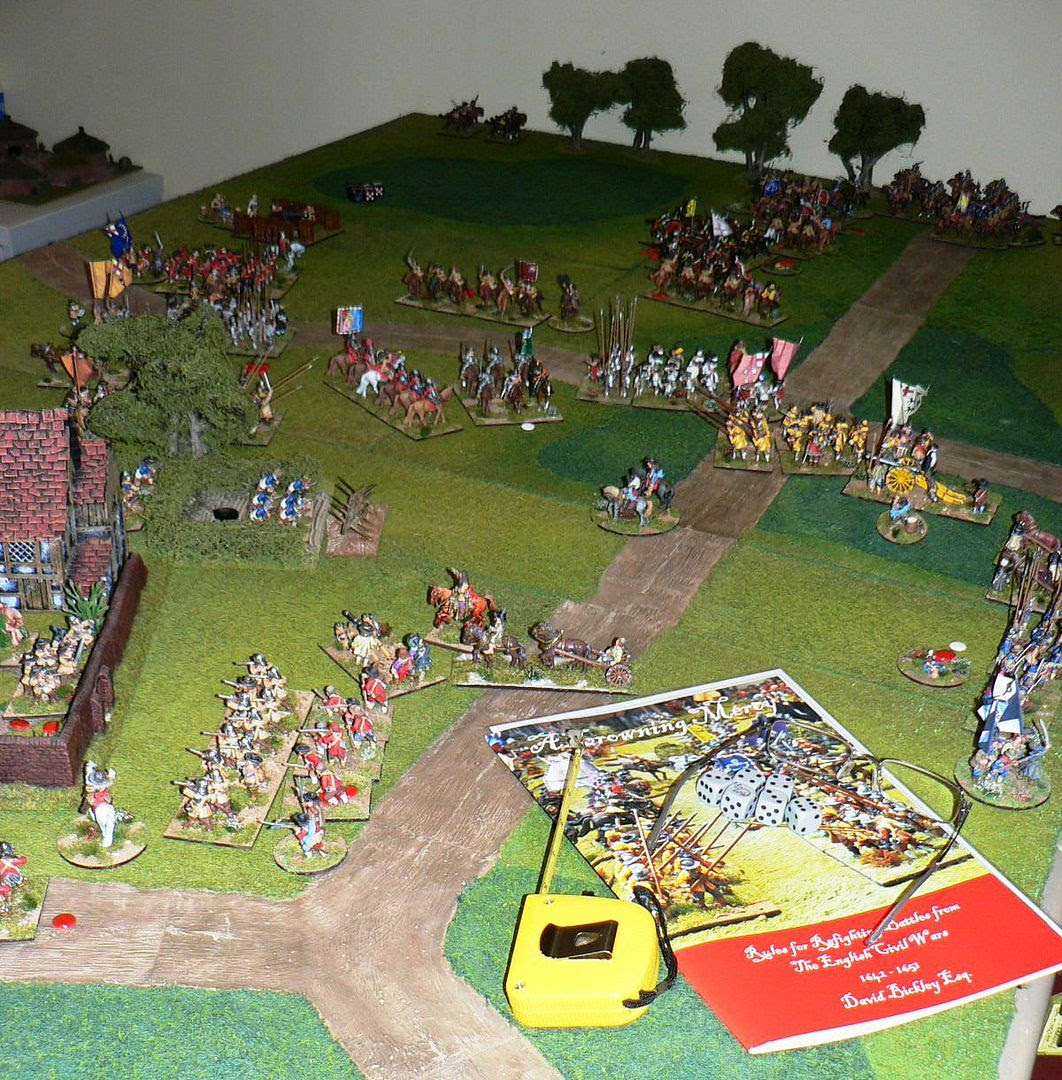 After six turns Sir John's shattered forces were in no shape to carry on and quit the field, enjoying the Honours of War from their victorious but generous opponent. As you can see we were using my own A Crowning Mercy rules, playing six turns in about two hours, with a break for tea and cake!
In a twist from our usual roles, I commanded the Royalists and Jon the Parliamentarians. Only having the initiative once in my own right during the game put me on the back foot mostly, as did my inability to eject a few dismounted horse from the Hall! My Royalist Horse were impetuous but largely ineffective, loosing some 10 bases to the Parliament's 3!! Those two factors largely controlled the outcome of our game in the end, aided by my rather timid Foote it must be said. For the Parliamentary army the horse on both flanks were decisive and their Foote steadier than their opponents in the end. All in all a pleasant way to pass an hour or two: good company, pleasant gaming and a decent cake! Hard to ask for more at my age...﻿
﻿
Posted by David at 11:05 1 comment:

On a roll with BOLT ACTION games, Jon and I decided to try a game set in the fictional Very British Civil War of 1938. Of course, the setting had to be around our own fictional town of Market Blandings, from P G Wodehouse's Blandings novels {currently being shown in a BBC version}. 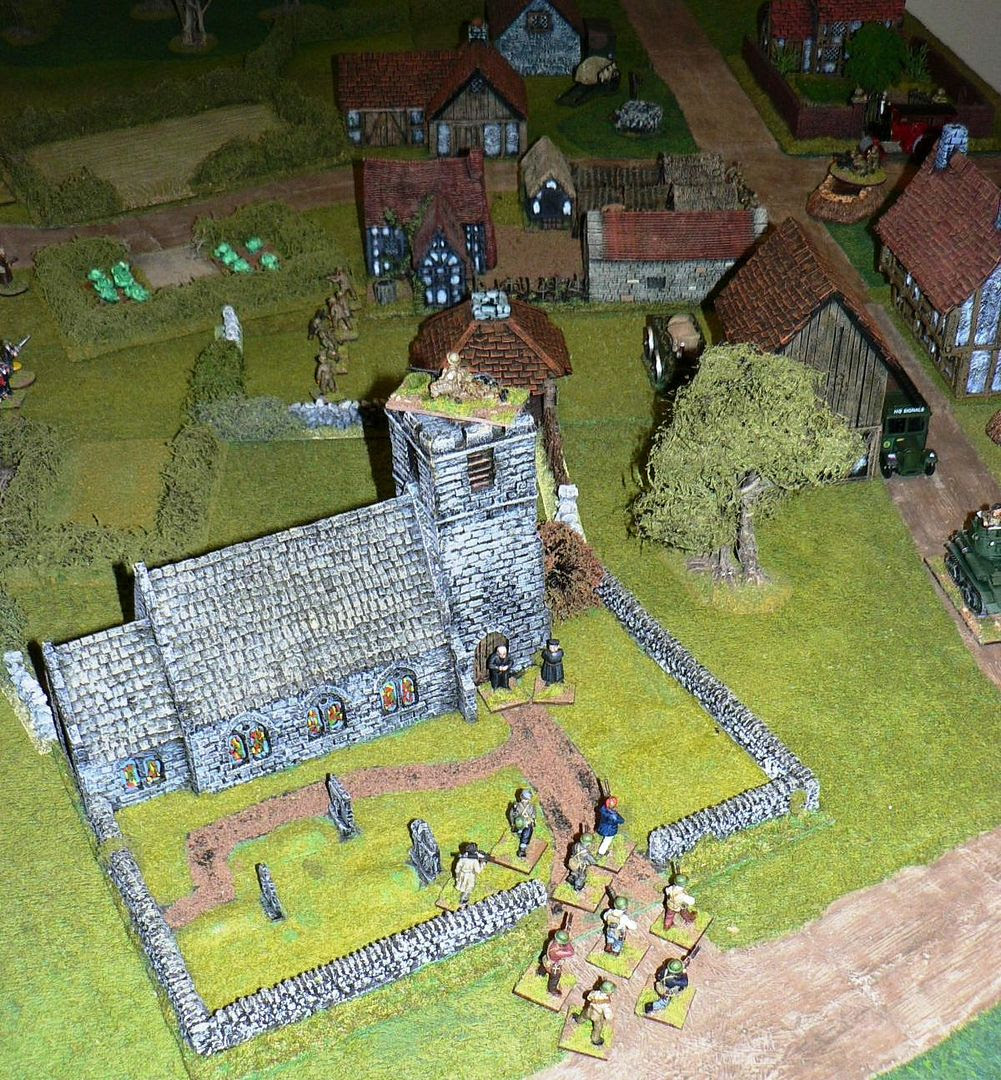 St David's, the Parish Church, was soon the scene of fierce fighting between the forces of Edward VIII and those of the Princess Elizabeth. 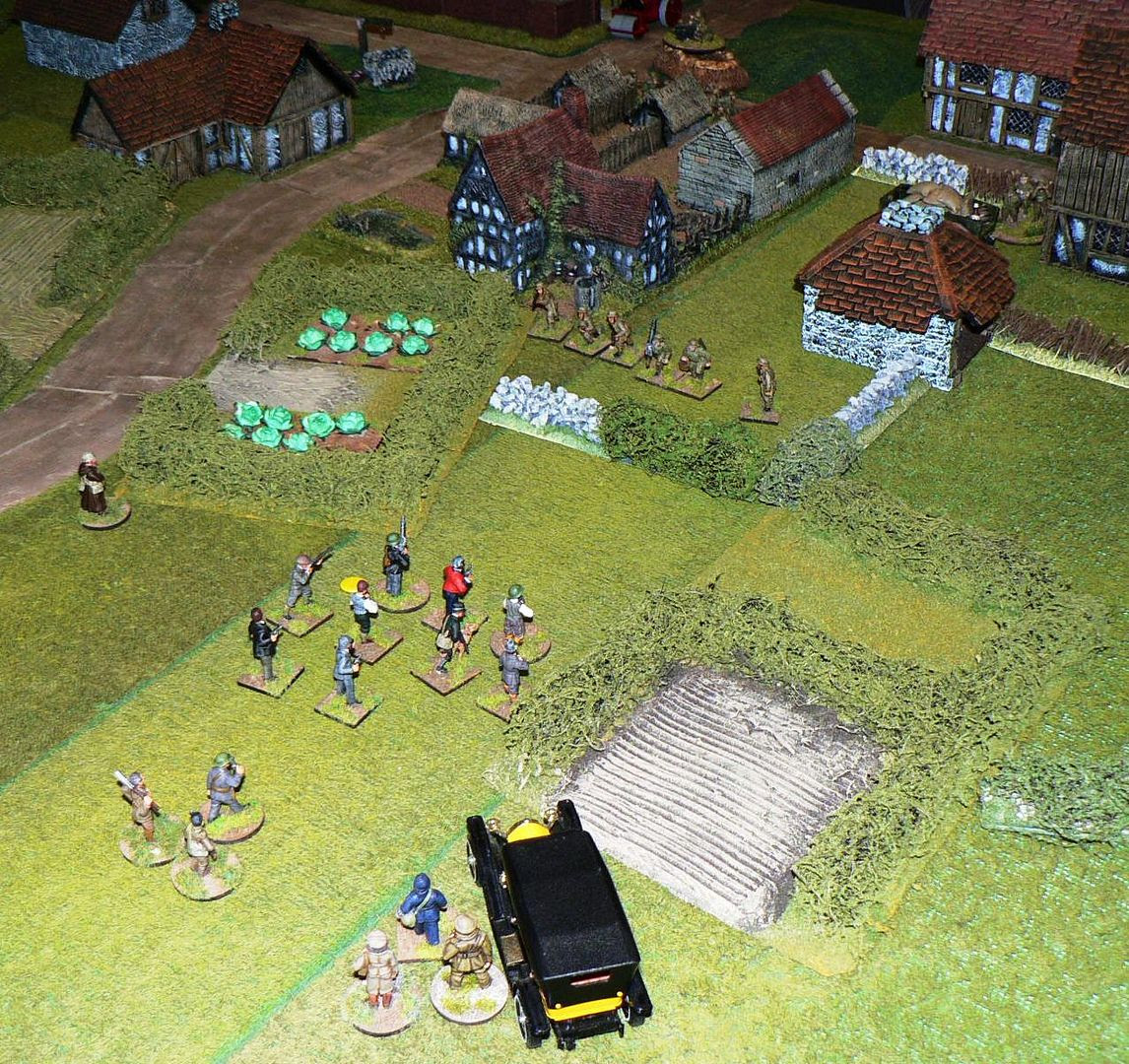 Under the watchful eye of the Princess, Lord Emsworth leads the Estate Militia into the attack in the centre, finding himself opposed by elements of the Kings Own Shropshire Light Infantry. 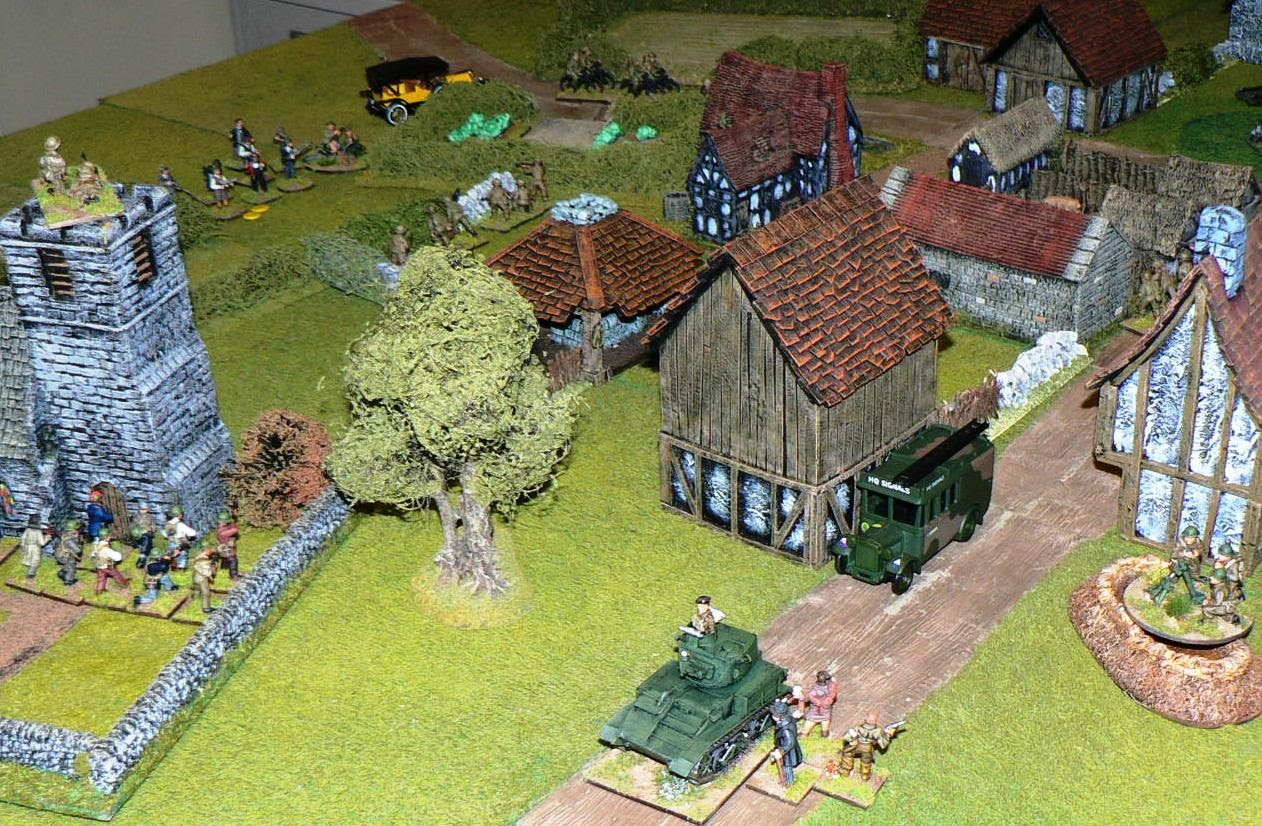 The King, advised by Wallace and Winston, instructs the commander of a Vickers VI Light Tank as it moves to the flank. 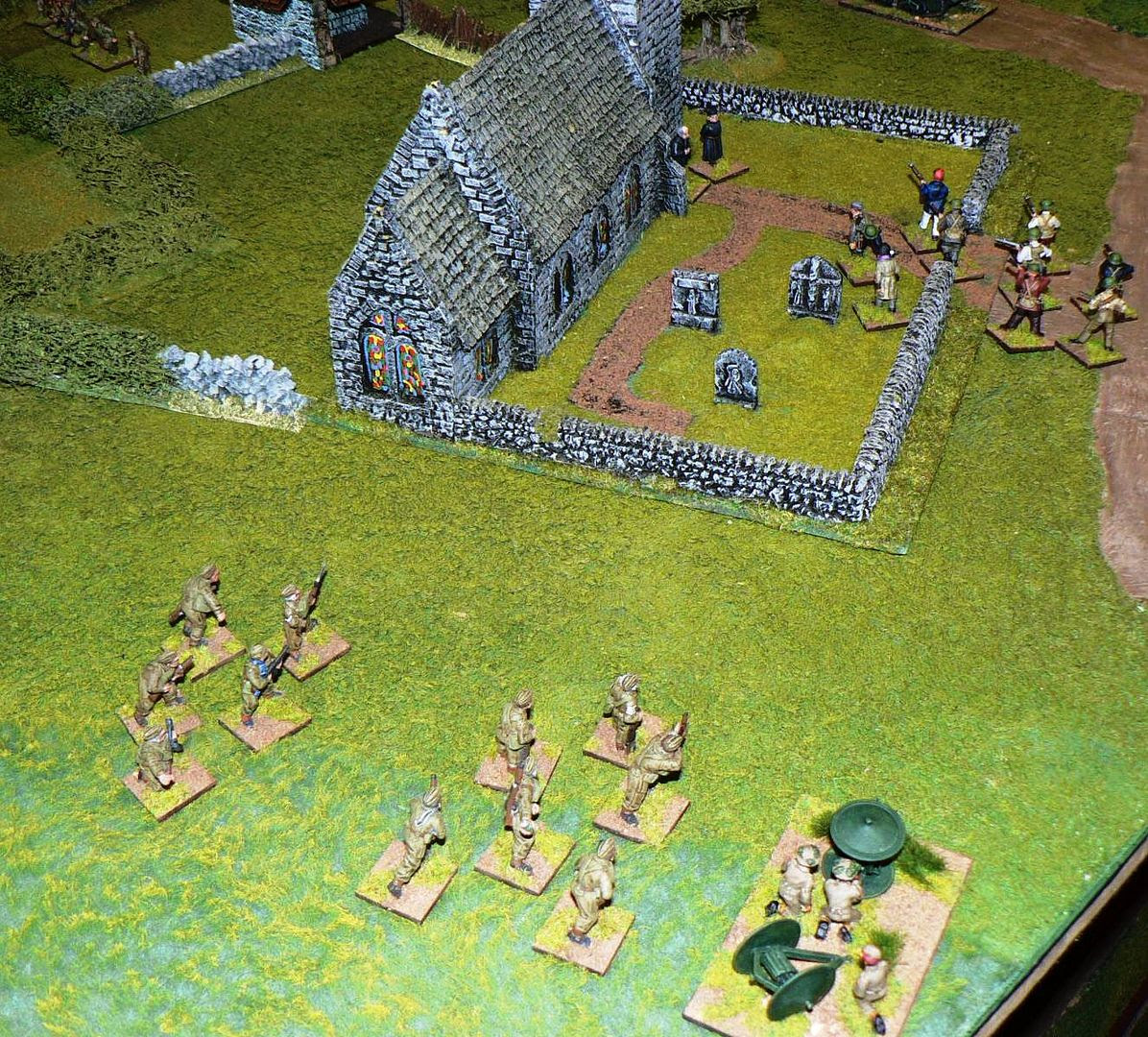 Quickly the Market Blandings LDV move forward in support of the attack on St David's, while the crew of the Smith Gun prepare to take on the enemy tank... 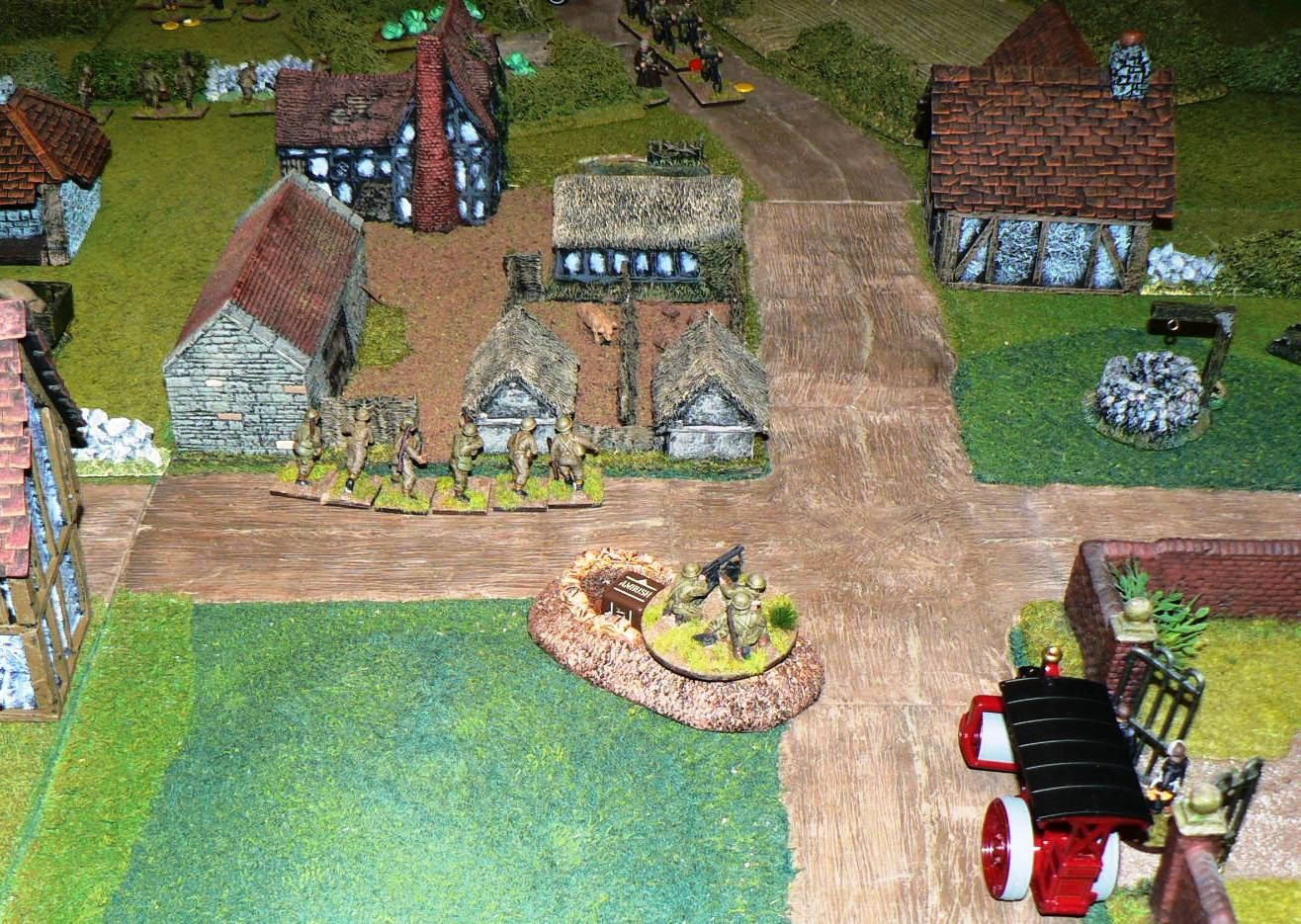 In the centre of Market Blandings a MMG position commands the approaches, supported by more Regulars. The forces loyal to Princess Elizabeth find their advance bogged down... 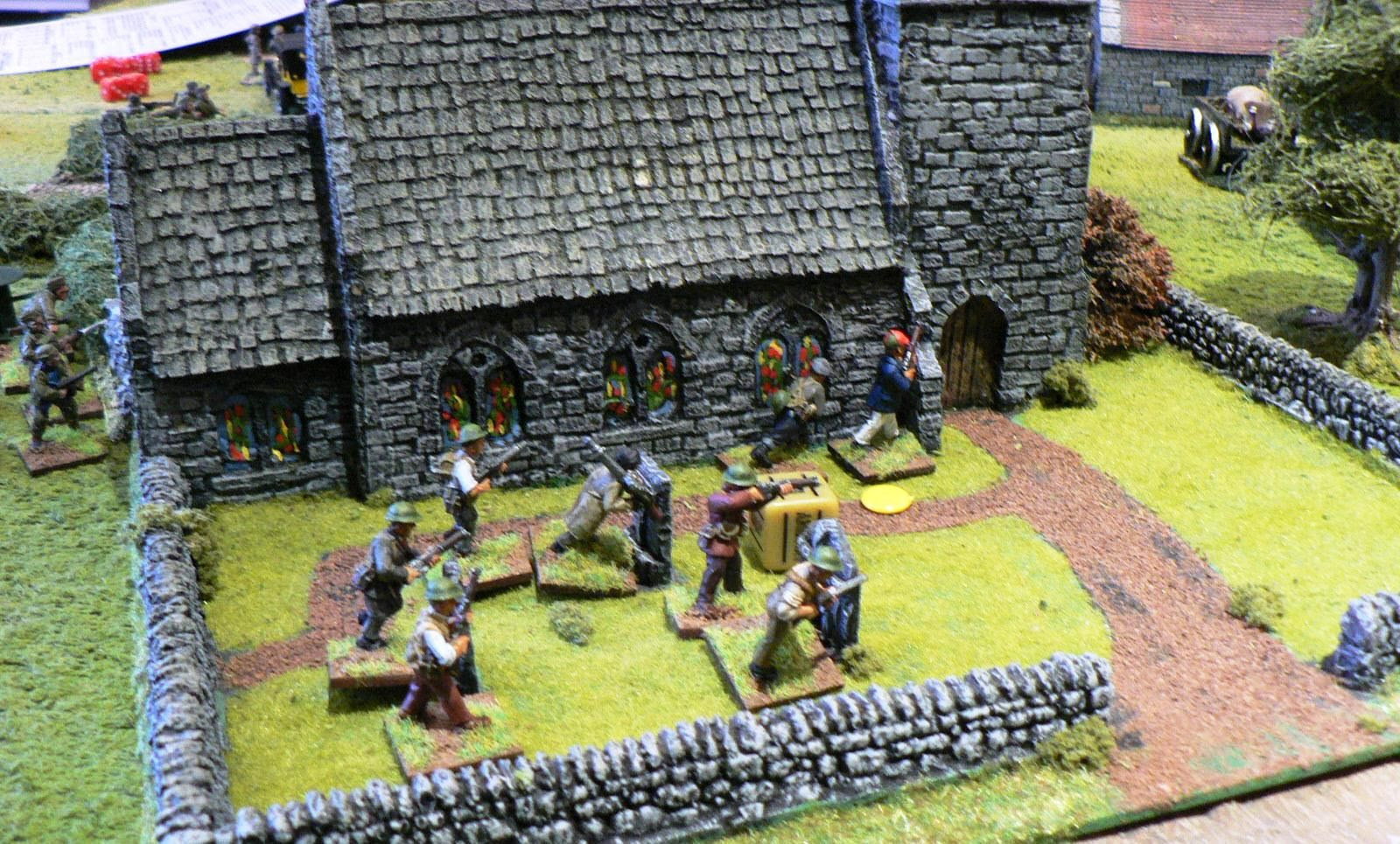 On their right flank the Estate's Militia finds its advance disrupted by the enemy's tank. The Smith Gun crew fail to score any penetration on their several hits! 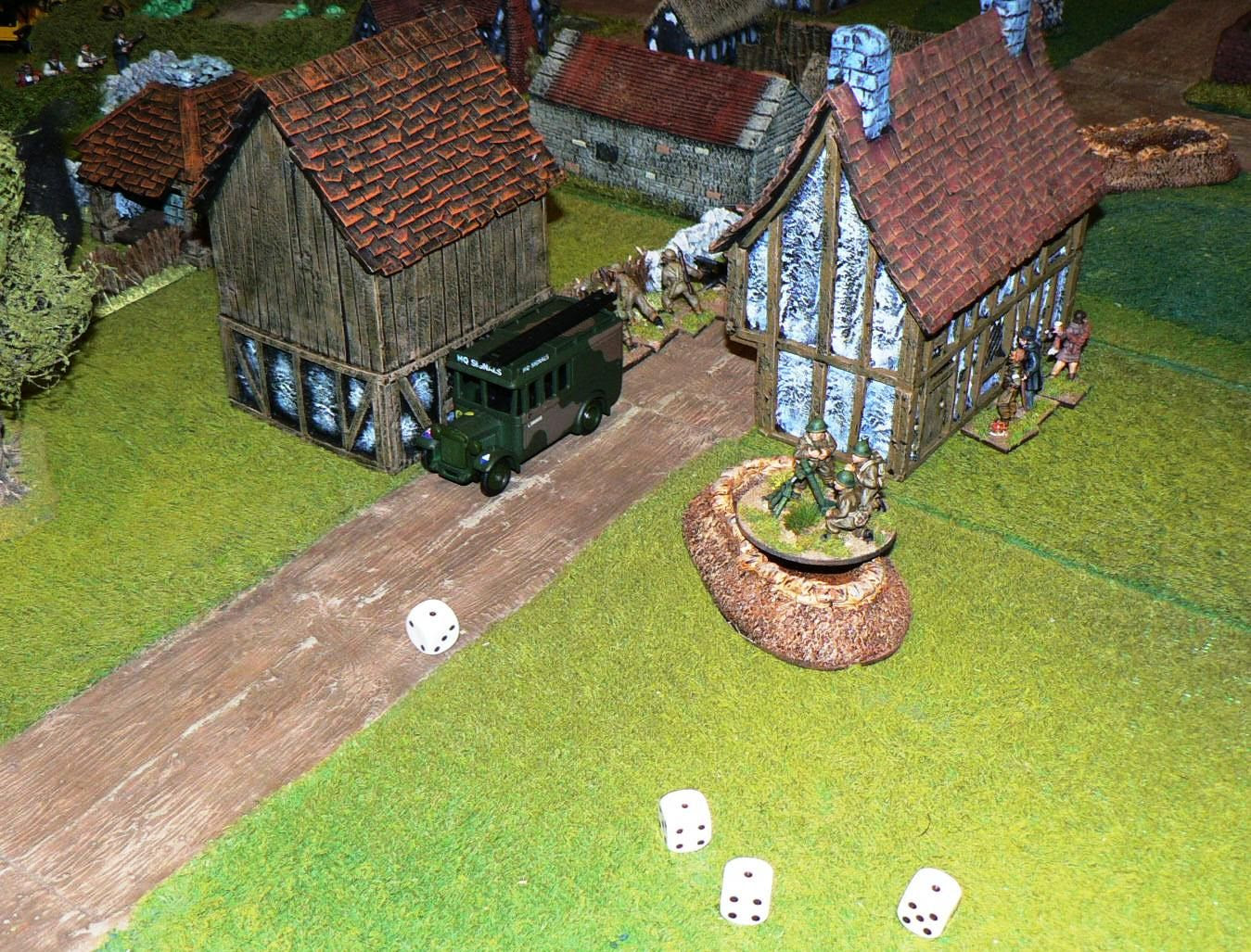 Luckily the enemy's 3" mortar was a little off target too! 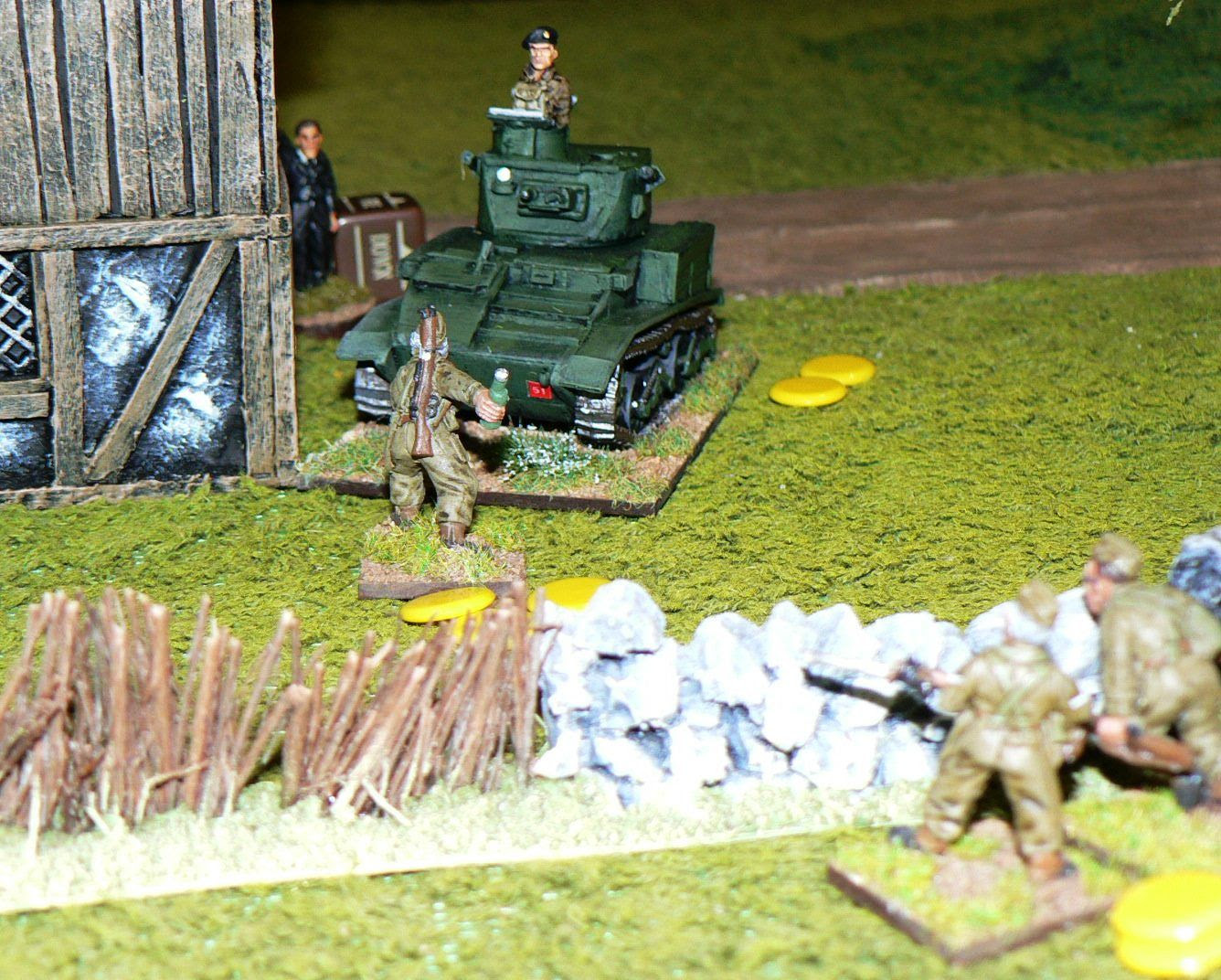 In desperation, Private Bykleigh rushes the tank with nothing more than raw courage and a bottle of petrol! 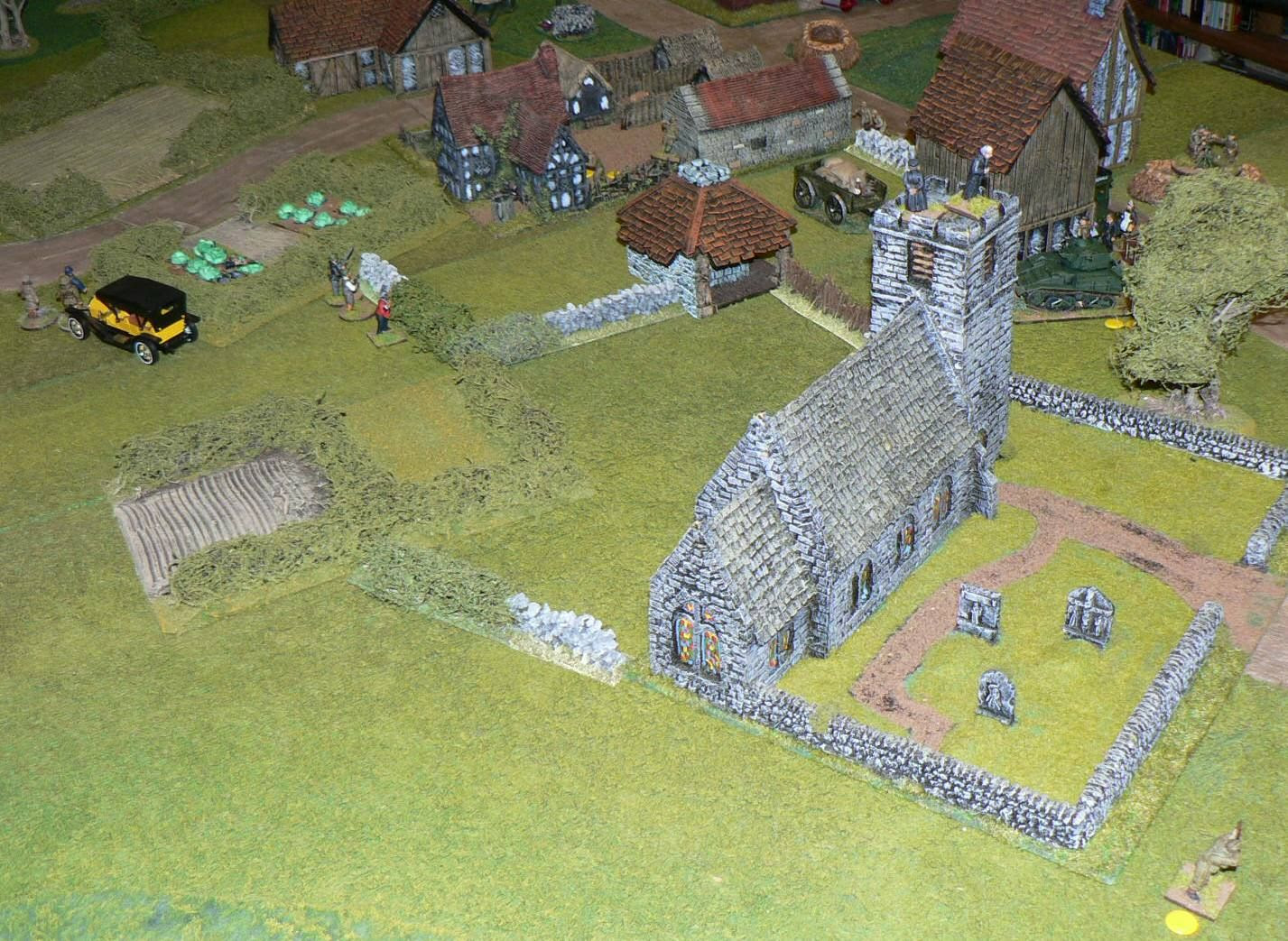 The end soon comes for the Princess's forces, driven back on their right flank with heavy losses, despite Private Bykleigh's futile gesture!
The remaining few heroes scurry away to fight another day, while the King and his forces advance on Shrewsbury.

Our first venture into the crazy world which is the Very British Civil War was really enjoyable for both of us. Fighting was vicious, as you'd expect in any civil war, but we both maintained cordial relations across the tabletop battlefield. On balance the game was great fun and I think we shall visit this genre again in the coming weeks. Now, on to Bolt Action WWI at Phil's tomorrow!

I played a Bolt Acton game here in GHQ recently with Simon, a chum from football who games occasionally when his hectic work schedule permits. The objective was to capture and hold a ruined farm. Simon took the B.E.F. and I took the Germans. 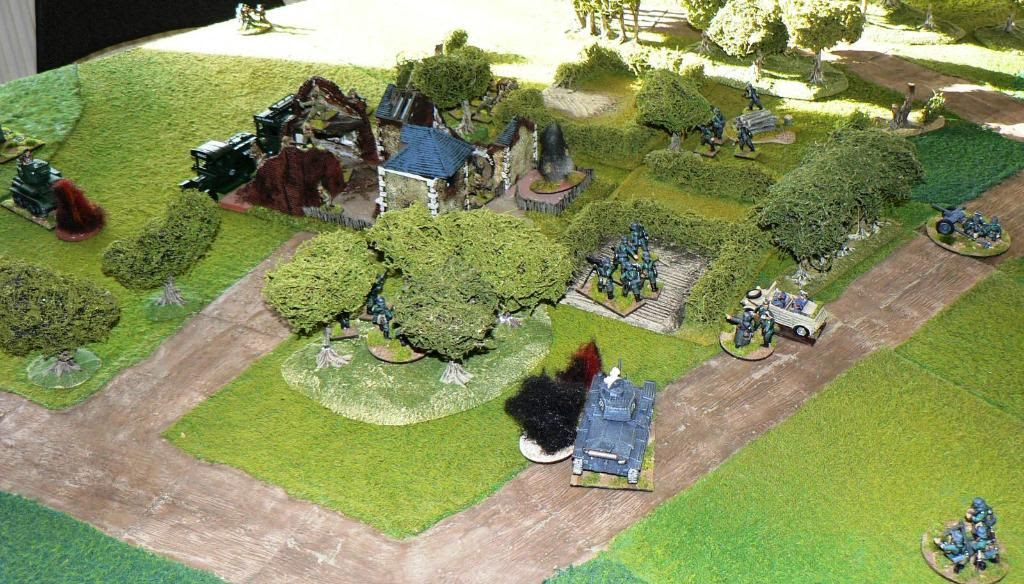 A general view of the table early in the game. 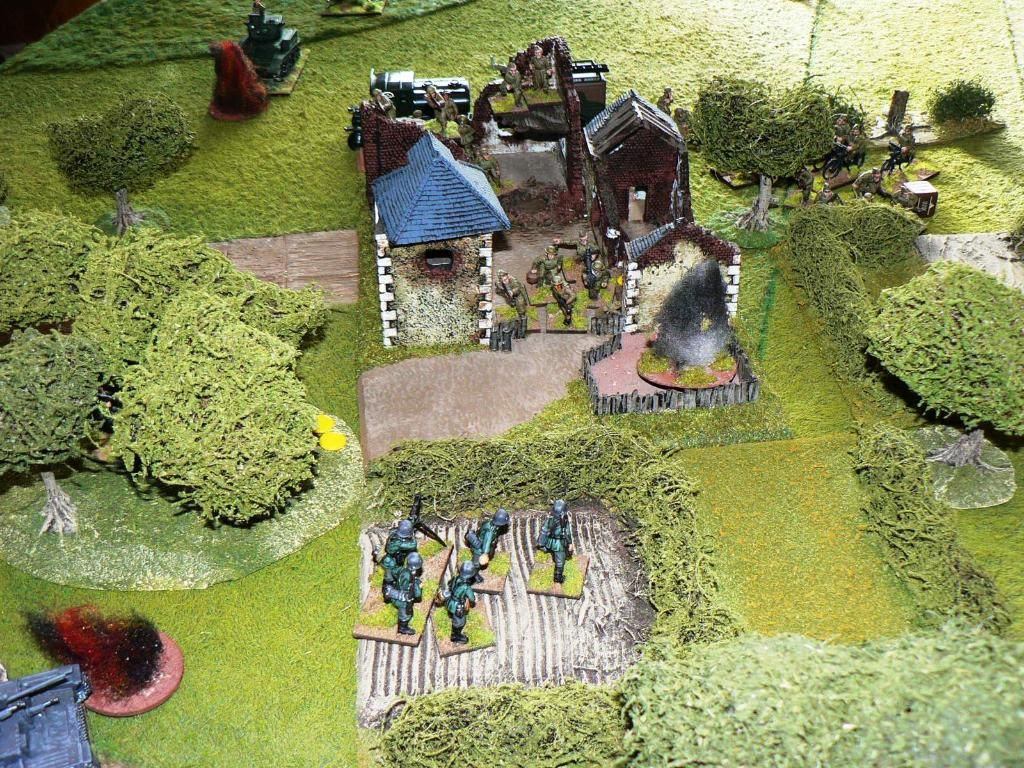 Early in the game the dice draw favoured the B.E.F. and they were able to occupy the farm complex. Both tanks suffered a knock out blow early on too!
﻿ 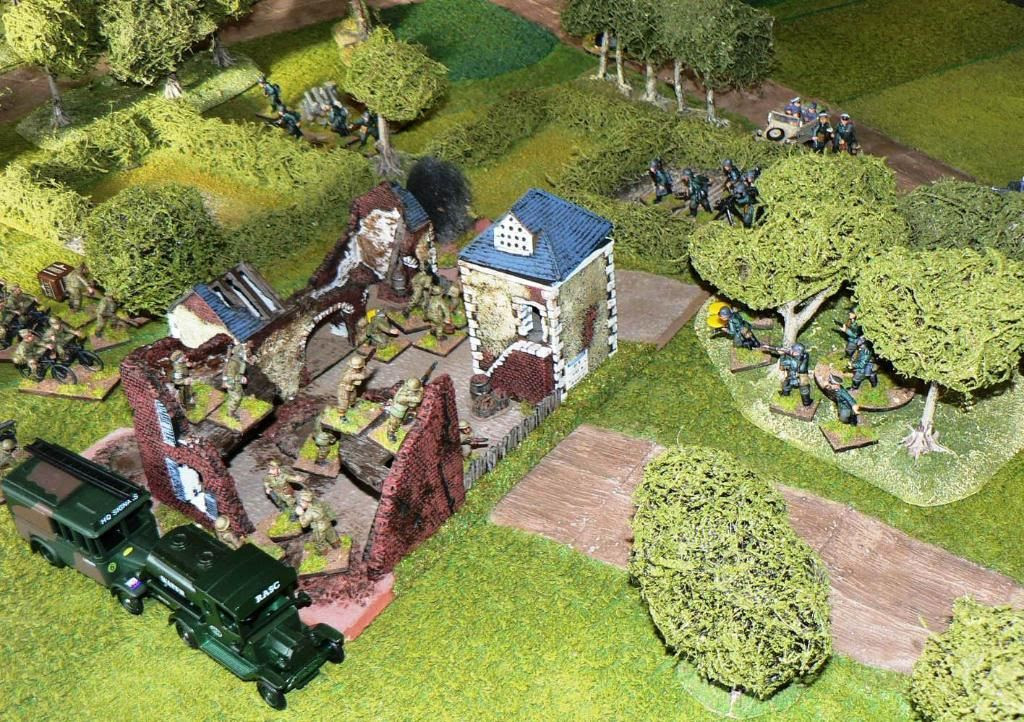 While the German left flank made progress through the woods the right found itself facing a killing zone and was unable to make progress. The centre provided sustained fire support against the defenders, but did little damage to them! 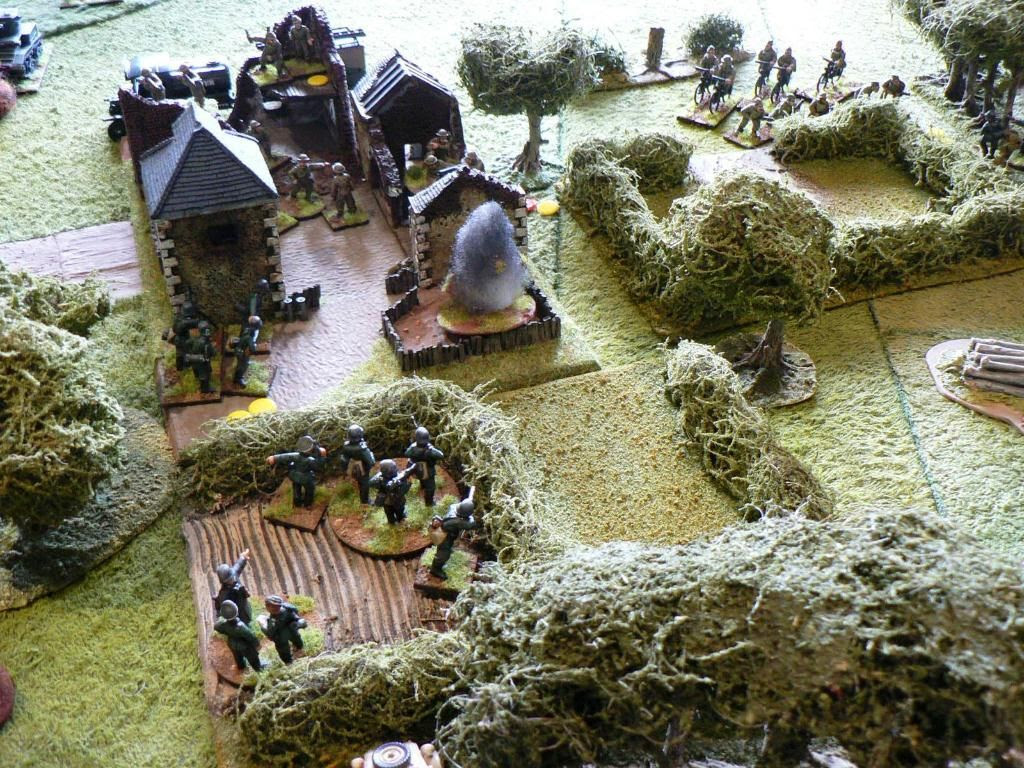 The Germans managed a temporary toe hold in the farm complex, but both their left and right supporting elements were driven off or destroyed. Ejected from the farm by overwhelming enemy fire, the remaining German forces withdrew to fight another day...

The farm complex I made using Hovells ruins, Dovecote, Eastern Front fencing sections and shell craters. The cobbled yard effect is a 'sample' of textured wallpaper from a DIY store. The explosion markers are kapok lightly sprayed black and mounted on MDF bases. The figures in my collection are mainly Foundry, with a few BEF/Warlord, with some Days Gone By prepainted vehicles in support.﻿