I thought it would be a good idea to post some pictures of my finished US naval presence for our Pulp games. Its based on a cheap wire framed 'ornament' I bought last year while staying with Matt and Sarah. 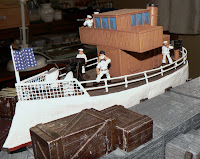 I stripped it down to the wire frame hull and first coated it with sheets of green stuff. The superstructure and main deck gun are from Minimi's range of ships, the Tramp Steamer I think.

The crew are Pulp Miniatures of course and the harbour walls, jetty and detritus are from Ainsty.

The paint scheme for the ship I copied from pictures I took on a visit to USS Olympia in Philadelphia﻿ and the naval ensign I found on the net. 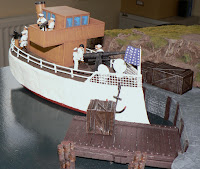 I have to paint the Marines, also by Pulp Miniatures, to complete the naval element in the games. Hopefully they'll be done later in the year. At present its more 1940 stuff and rebasing the ECW armies that's occupying what time I have...
Posted by David at 07:53