This week I have been painting some more of the lovely Empress Miniatures Anglo-Zulu War figures that I treated myself to at Christmas. I've added another base to my British Infantry Regiments, to make use of the figures in the newly released Command pack. 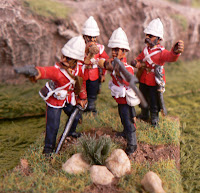 This stand, for the 80th, the Staffordshire Volunteers, features three of those figures ~ Officer, Bugler & Sergeant. 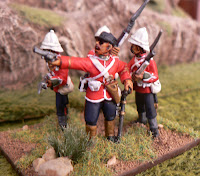 The second picture has the other officer from the pack, depicted as the 24th. I use Foundry British Redcoat midshade washed with the old GW Red Ink for ease of painting the jackets.

I also painted some Natal Native Contingent troops, in both mounted and dismounted order, complete with Horse holder set. I hope there'll be a similar set for my Boers and Mounted Infantry in due course, it really adds to the look of the game.

I've used a very limited pallatte of colours here, mostly Foundry British Uniform, Drab and Moss Green﻿ on the trousers and jackets and various greys for the slouch hats. The natives' horses are smaller than the Officers' mount, a nice touch I thought. The close up picture below shows what I've tried for I think. 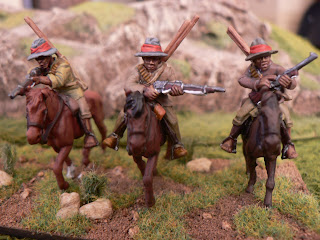 I've started now on some of the Mounted Infantry, working on both the mounted and dismounted versions of each figure at the same time, to try to ensure that I don't produce something glaringly odd...﻿
Posted by David at 06:00